Keep This Book In Your Bathroom

Rose George's The Big Necessity: The Unmentionable World of Human Waste and Why It Matters is a fascinating description of sanitation conditions around the world.

To quote from the introduction:

[....] 2.6 billion people don't have sanitation. I don't mean that they have no toilet in their house and must use a public one with queues and fees. Or that they have an outhouse, or a rickety shack that empties into a filthy drain or pigsty. All that counts as sanitation, though not a safe variety. The people who have those are the fortunate ones. Four in ten people have no access to any latrine, toilet, bucket, or box. Nothing. Instead they defecate by train tracks and in forests. They do it in plastic bags and fling them through the air in narrow slum alleyways. If they are women, they get up at 4 A.M. to be able to do their business under cover of darkness for reasons of modesty, risking rape and snakebites. Four in ten people live in situations where they are surrounded by human excrement because it is in the bushes outside the village by in their city yards, left by children outside the backdoor. It is tramped back in on their feet, carried on fingers onto clothes, food, and drinking water.

[....] Poor sanitation, bad hygiene, and unsafe water — usually unsafe because it has fecal particles in it — cause one in ten of the world's illnesses. [....] Diarrhea — nearly 90 percent of which is caused by fecally contaminated food or water — kills a child every fifteen seconds. The number of children who have died from diarrhea in the last decade [1998-2008] exceeds the total number of people killed by armed conflict since the Second World War. 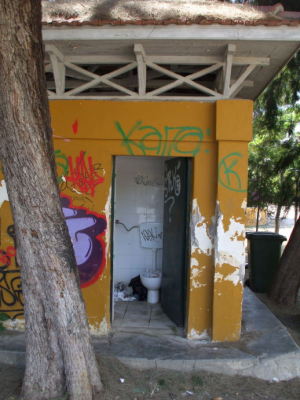