Who Took The Seat? Sometimes you will find that a toilet is missing its seat. I don't mean a squat toilet, but a raised porcelain commode that has holes for mounting a seat and lid but has neither. It seems to need a seat, but the seat is missing. Why does the owner do this? It's for hygiene. Toilets can be much cleaner without seats.

Toilet seats are made of relatively soft and somewhat porous plastic or painted wood. That soft, porous surface provides plenty of opportunity for dirt and microorganisms to take hold, and it is nearly impossible to get it completely clean. 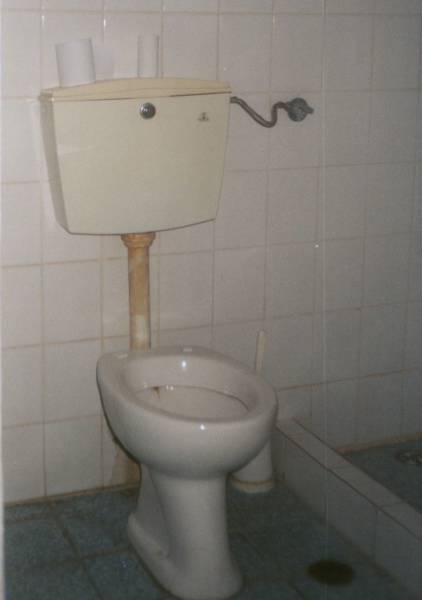 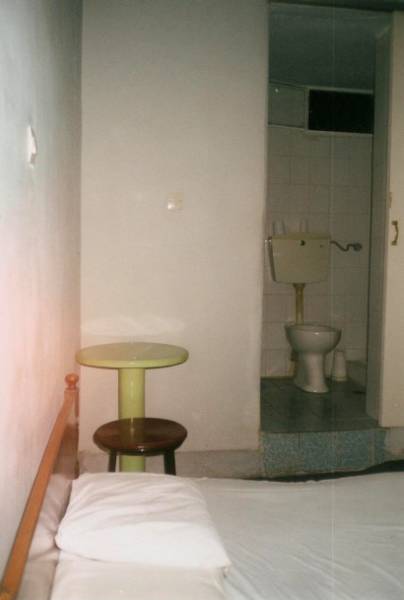 The bowl itself, however, is vitreous. That is, glass-like. A toilet bowl is extremely hard and non-porous. The outer surface of the bowl is a ceramic glaze that has been fired or baked to convert it to a material similar to glass.

You can be about as harsh or aggressive as you want, mechanically or chemically, in cleaning a toilet bowl.

Meanwhile the entirely non-porous glass-like surface provides no place for microorganisms to hide.

So where do you sit? On the rim of the bowl, of course! If you complain that it isn't very comfortable to sit on the rim of a porcelain toilet bowl, I would ask just how long you plan on sitting there, and why.

Notice the non-porous vitreousness of this high-tanked seatless model in the Akti hotel in Korinthos, Greece near the train station for the Προαστίακος or Proastiakos line to Athens and the main line continuing west along the Gulf of Corinth.

The vitreous material means that the seating surface gets less dirty, and can more easily and effectively be cleaned.

Have you ever really cleaned your toilet seat and lid, getting down around the hinge and under the rear of the seat where you can't easily clean? Nasty, isn't it? Wouldn't it be much cleaner if that seat and lid weren't there at all, so you could easily wipe it clean?

Just be careful that you don't fall down into the bowl when using a seatless commode!

There are several U.S. Occupational Safety and Health Administration (OSHA) guidelines regarding sanitation in the workplace, but no specifics about requiring toilet seats in employee restrooms. Their rule states that any restroom facility must be clean, sanitary, and in serviceable condition. An executive master of health administration may think these rules need clarification where seatless toilets are concerned, but an argument should definitely be made for the cleanliness of seatless toilets.

The immaculate seatless model seen below is in the Vatican. Seatlessness is next to cleanliness.

This isn't the Papal Throne, this is a public toilet in the Vatican Museums.

Of course they didn't all use a toilet while they were visiting the museums, and there were several toilets other than this one, but still, this one gets a lot of use.

Public toilets throughout Europe may be seatless. Seatlessness gets more common as you go further south. Very few public toilets in Italy and Greece have seats.

By the time you get to Greece, you will find that even toilets in hotel rooms or in pensions or domatia (effectively extra rooms in private homes) lack seats. Strangely, the seatless toilets in Greece often have the removed seat and lid sitting in the corner somewhere, as if the owner recently got fed up and ripped the thing loose. 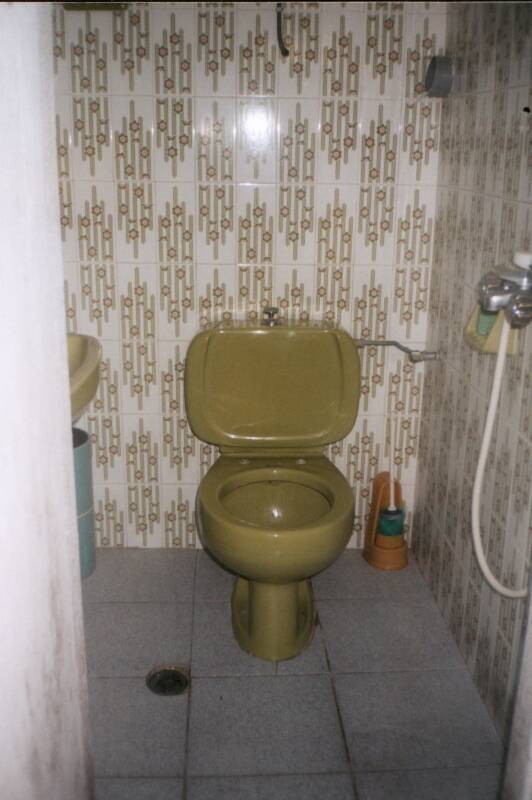 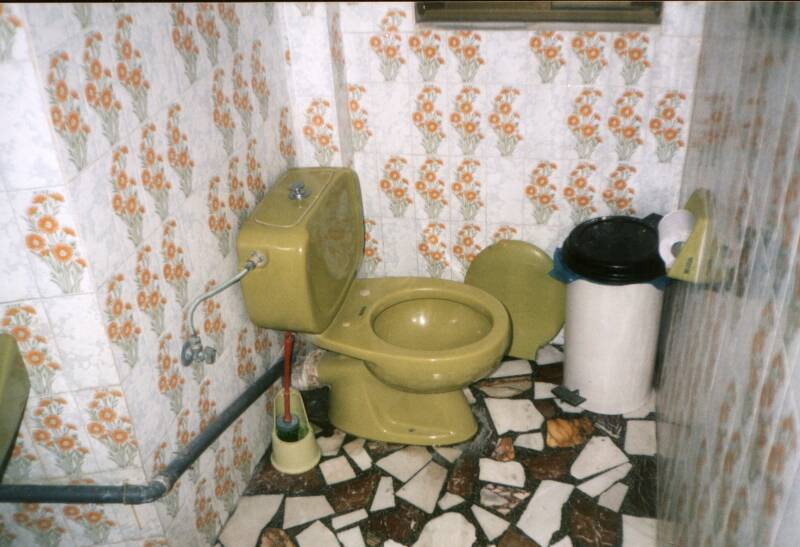 Someone has forcibly removed the seats and lids of these two intensely avocado toilets in the Ionian Domatia in Vathy town on the island of Samos. Notice how the lid is sitting on the floor, leaned up against the wall, in the picture above.

In the second picture, it looks almost as if there is a seat and lid raised up against the tank. No, that's just a design on the front of the tank.

There's neither a seat nor a lid. Notice the two empty mounting holes where they would be attached at the rear of the bowl rim just below and in front of the tank.

This lovely Russian toilet is in a train station in Moscow.

Note the standard Russian lack of seat, just a refreshingly cool porcelain bowl. These are especially bracing during those chilly Russian winters.