I once saw Jim Lovell, commander of the Apollo 13 mission in 1970, give a talk at Purdue University. Here was a guy who had flown to the Moon twice, one time on a mission that just barely made it back. What a career! But he opened his talk by saying that there was something he should get out of the way first, so people wouldn't be distracted thinking about their question and not pay any attention to his very interesting stories about his space missions. Yes, the most common question is, "How do you go to the bathroom in space?"

Astronaut William Pogue wrote a book on the topic "How Do You Go To The Bathroom In Space?

Before you get all excited and start mailing me pictures...

Remember, these pages document toilets that I have seen. I haven't actually gone into space.

However, I have visited museums where these things can be seen.

It's not just astronauts — museums also get that question.

This is the "How do they go to the bathroom in space?" display at the Smithsonian's National Air and Space Museum in Washington DC, U.S.A. This is the museum on the National Mall in central Washington. 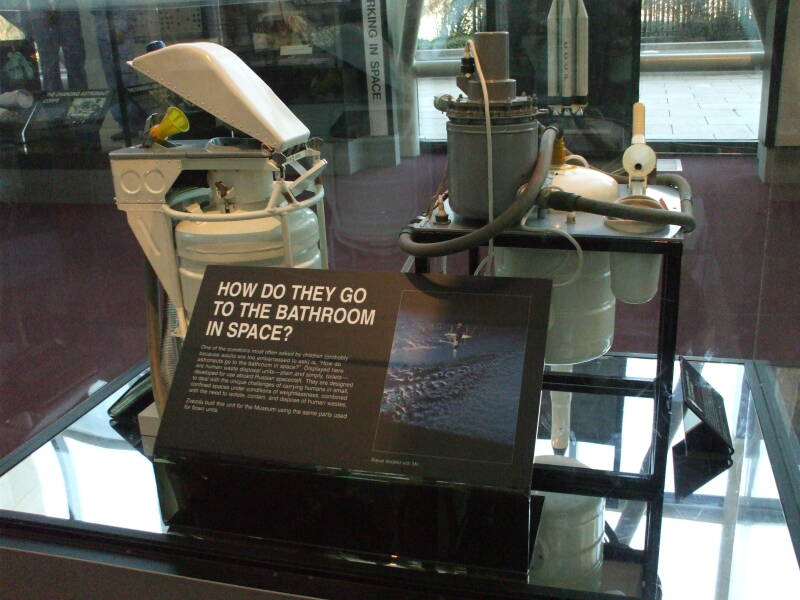 You don't want to go to space without a toilet you're certain will work. The paper "Zero-Gravity Testing of a Waste Management System" explains how to test space toilets on earth. Thorough testing needs to include "emergency diarrheal disorders" in a zero-gravity environment. From the paper's abstract:

This paper describes the testing of a waste management system designed and fabricated for use in a space vehicle. The system provides for the collection and inactivation of urine, feces, emergency diarrheal disorders, vomitus, and debris; the volumetric determination of each micturition; and onboard storage of the inactivated wastes within the waste management system compartment.

The zero-gravity test program conducted in a KC-135 aircraft provided the primary verification of the performance of the waste collection and urine volume determination functions prior to actual space flight.

The test hardware simulated the actual system to a high degree of fidelity with respect to operational characteristics of the airflow required in collection, mechanical functions and system pressure differentials, in order to minimize simulation errors. A unique, specially designed waste dispenser actually defecated and urinated to provide controlled variables of inputs to the waste management system thereby eliminating the need for a human subject for the waste management system. Variations in urine rates, quantity, and velocity as well as variations in fecal consistency, weight, and size were controlled, thereby establishing a common base to evaluate potential changes in the overall system.

The test program flexibility provided the operational inputs necessary to establish a firm design configuration to be established prior to subjecting the system to environmental qualification. The successful completion of zero-gravity tests assured the designer that the waste management system will meet specification performance requirements in the space vehicle.

Below are the Human Waste Disposal Units from the Soviet/Russian Mir (or Мир) space station and the Soyuz (or Союз) spacecraft. 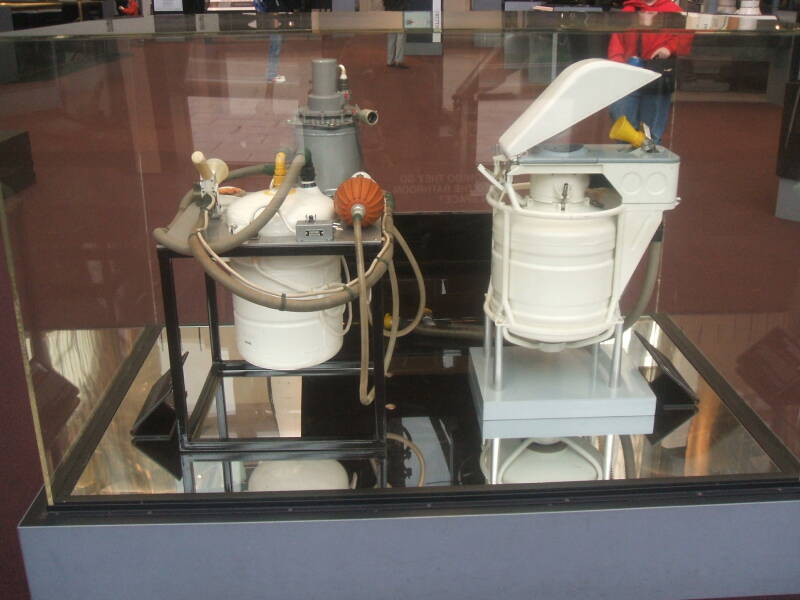 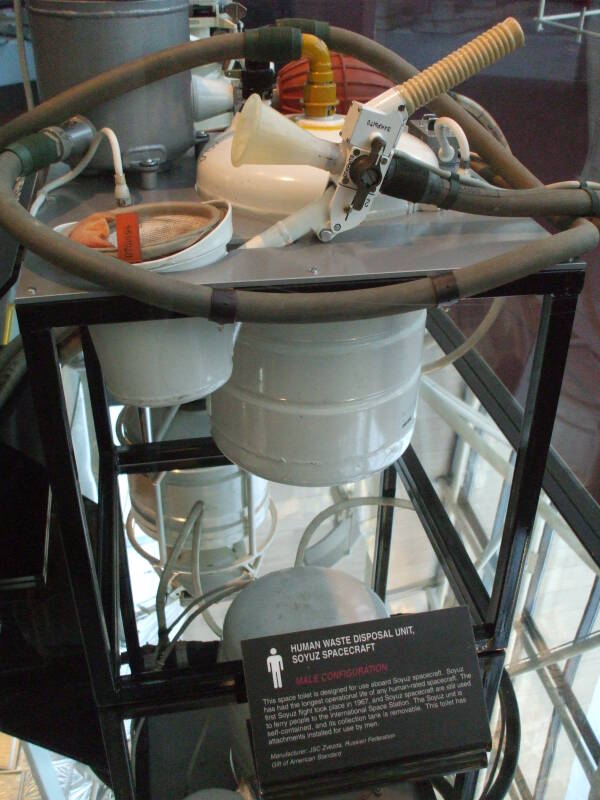 The Союз toilet is configured for male use. 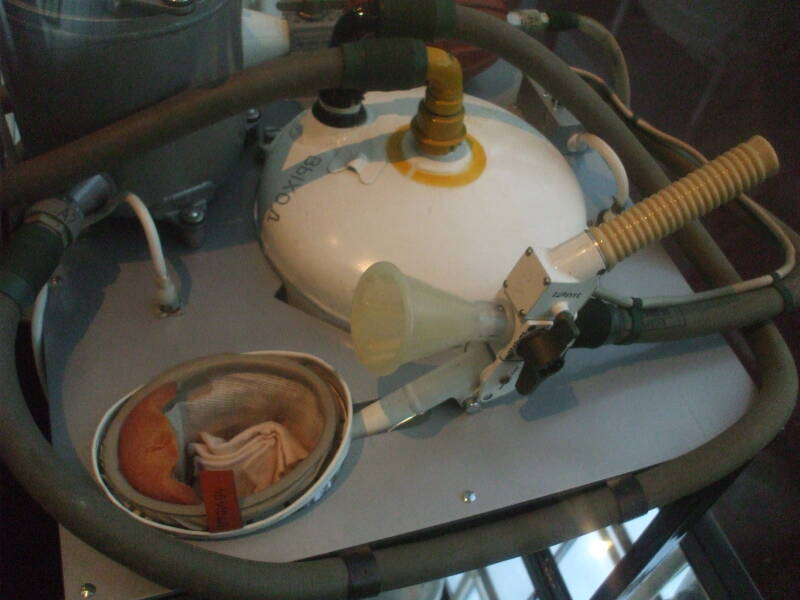 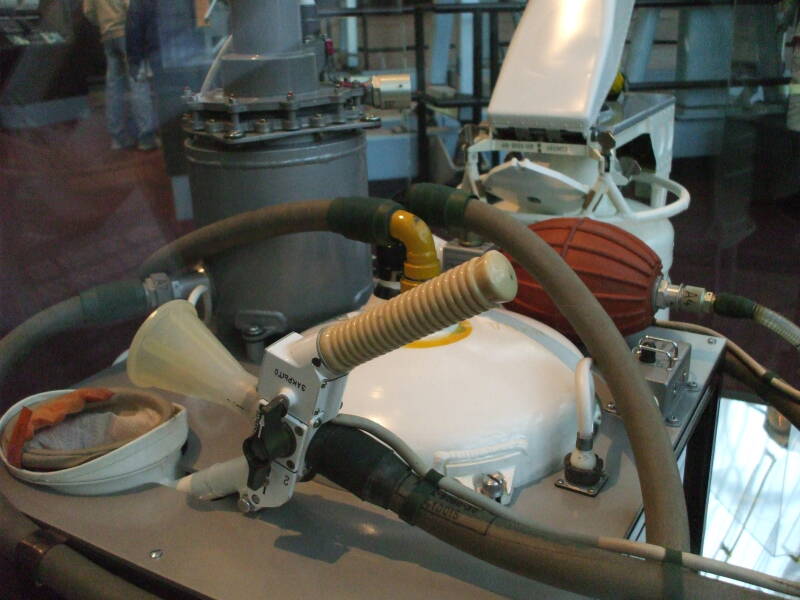 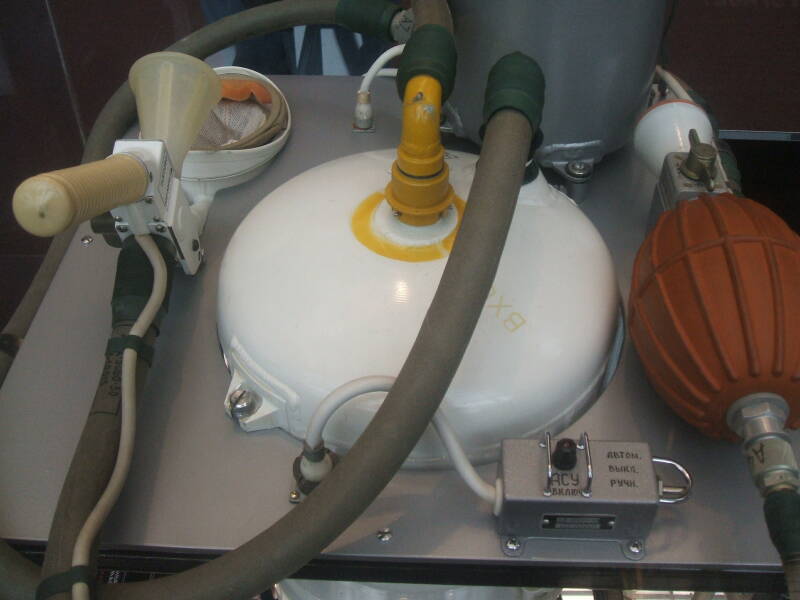 The Мир toilet is configured for female use. 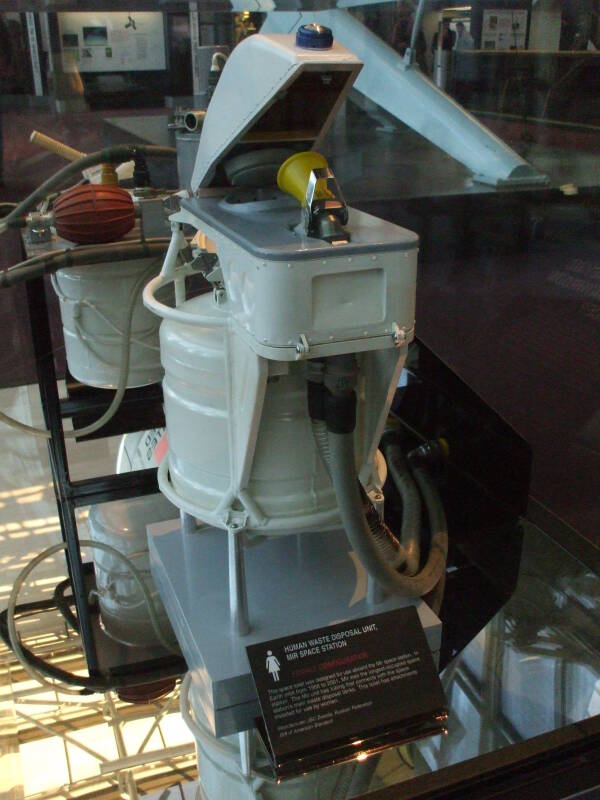 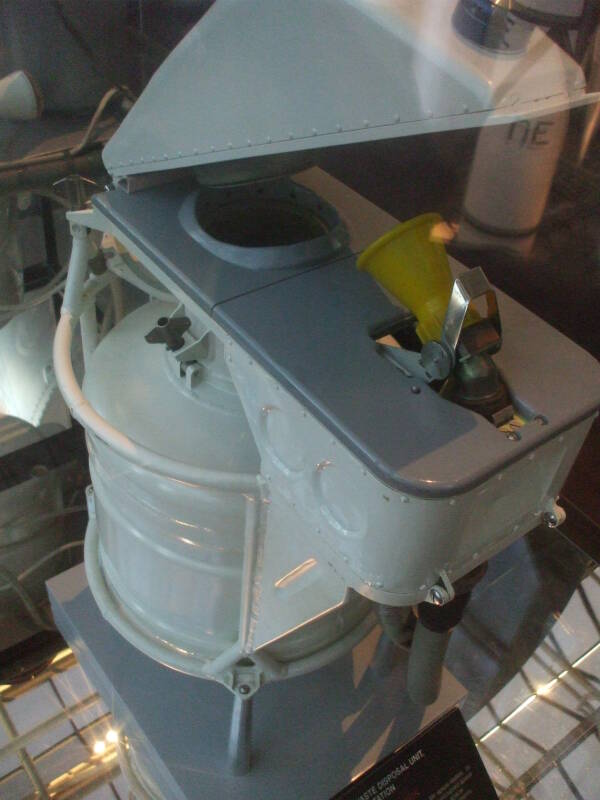 This urine collection kit is from a US-Russia Shuttle-Mir mission in 1994.

Until seeing this, I had no idea what the Russian for "urine collection kit" would be. УКЛАДКА "М-ПРИЕМНИКИ", as it turns out. Complete with so-called "quotation marks".

This is also in the National Air and Space Museum in downtown Washington DC. 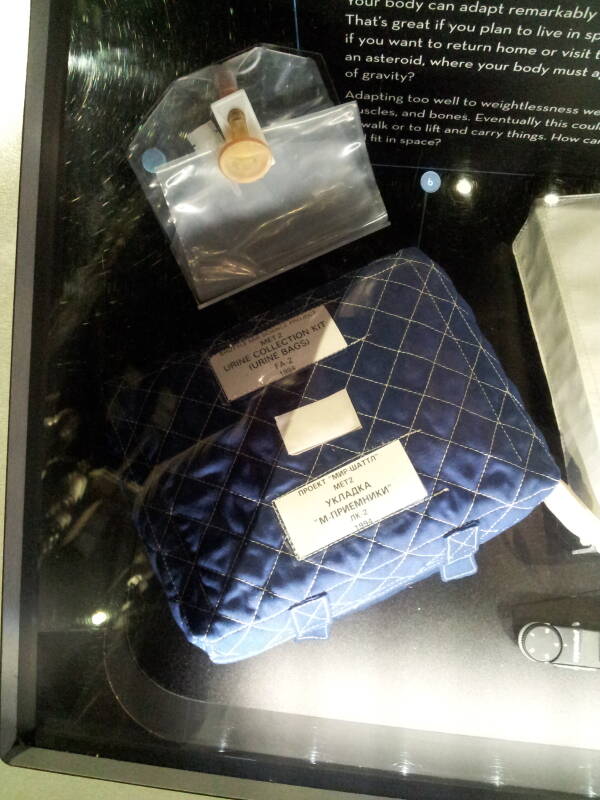 Going further back in history, Skylab was the American 1970s space station. The National Air and Space Museum has the backup Skylab, which the U.S. planned to launch but did not.

Below is the Waste Management Compartment on the backup Skylab in the National Air and Space Museum. At left are the Towel Retention Devices. The square opening into the bulkhead at right is the Wash Basin.

Beyond that, the white oval plastic device and the surrounding plumbing are labeled as the Waste Collection Facilities. 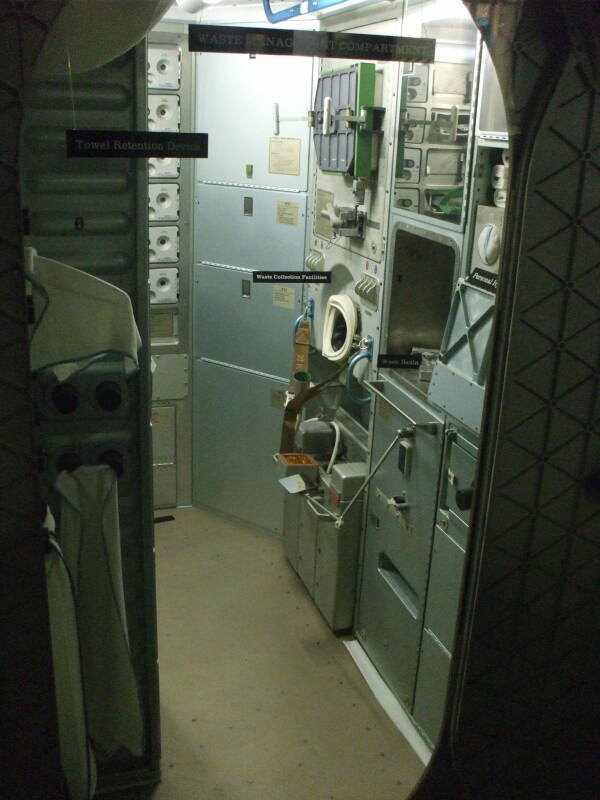 The U.S. Space Shuttle flew from April 1981 until July 2011. In 2016 the Smithsonian's National Air and Space Museum opened a new exhibit that includes its toilet. 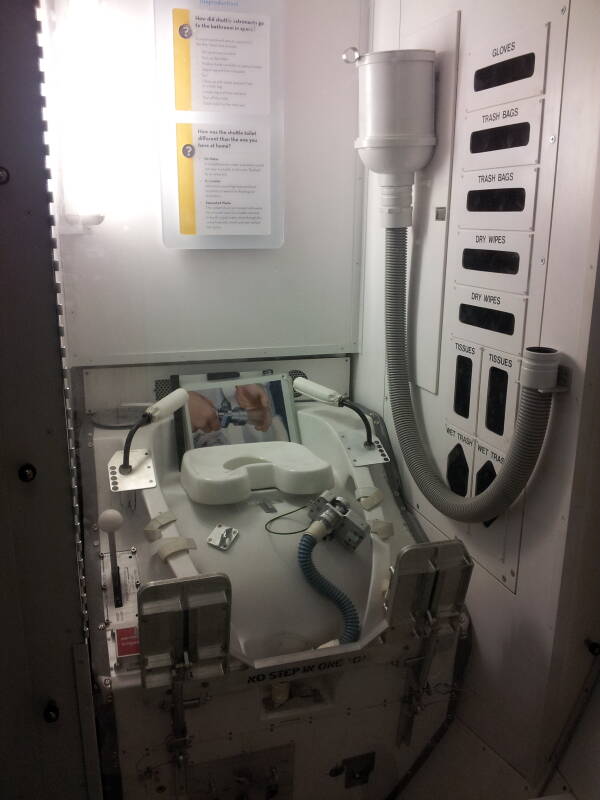 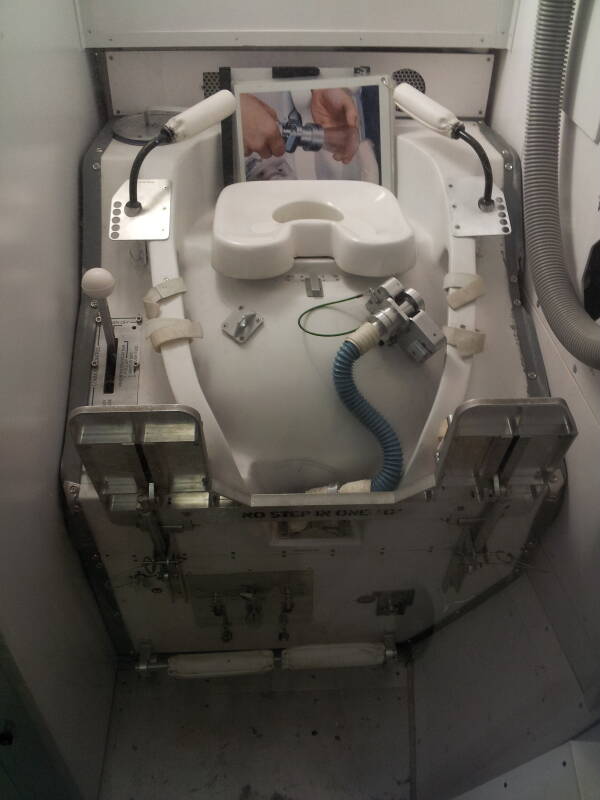 The signs within the display say:

How did shuttle astronauts go to the bathroom in space?

It wasn't quick and easy to use a toilet like this. Here's the process:

How was the shuttle toilet different than the one you have at home? 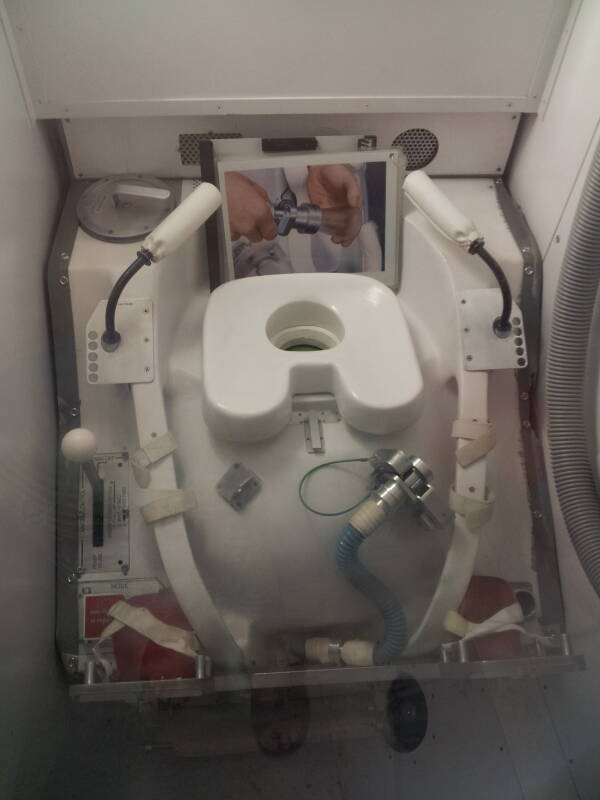 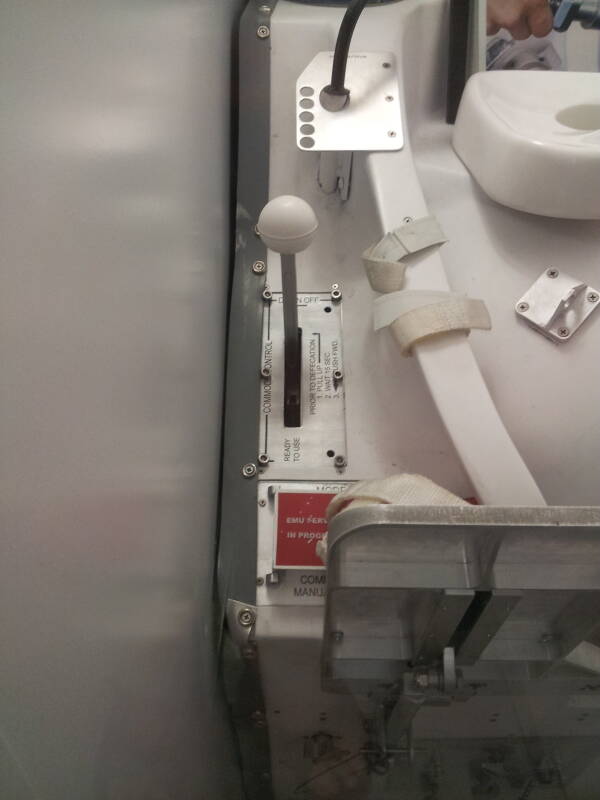 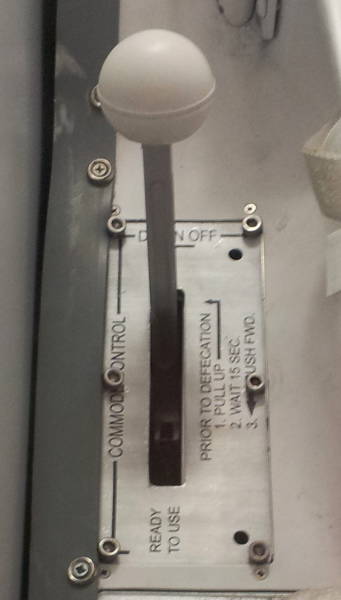 The Smithsonian's Steven F. Udvar-Hazy Center near Dulles Airport, 30 kilometers or more west of Washington, has a great collection if you can manage to get out there. Ask at the museum in the city — there is a bus from central Washington every hour or two, it takes about an hour to get to the Dulles Airport, and from there you can take a Virginia regional shuttle bus. A taxi would probably cost at least $60 each direction, and parking at the museum is $15 per car.

They have lots of aircraft in a large hanger, with one area holding spacecraft including the Enterprise, the first shuttle. It never flew in space, but it did fly in some drop tests — it was dropped from its 747 carrier to test its glide and landing characteristics.

And, they have further "How do you use the toilet in space?" exhibits, in which it's shown that on earlier flights you didn't use a toilet, you used something like a diaper or just a plastic bag.

Below are pictures of the artifacts and transcriptions of the labels. 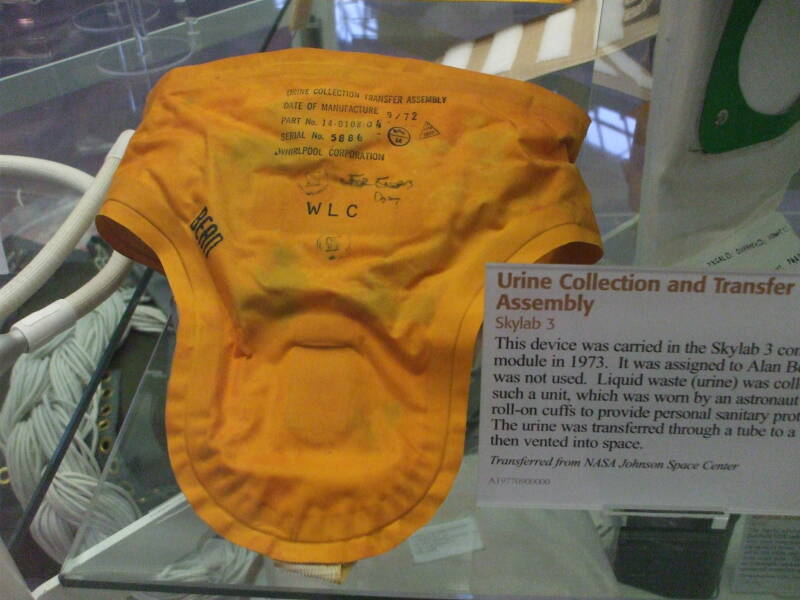 This device was carried in the Skylab 3 command module in 1973. It was assigned to Alan Bean but was not used. Liquid waste (urine) was collected in such a unit, which was worn by an astronaut and had roll-on cuffs to provide personal sanitary protection. The urine was transferred through a tube to a tank, then vented into space.

Porous bags like this were installed in the Skylab toilet to capture solid waste, which was then dried, stored, and returned to Earth for analysis of the astronauts' digestion and metabolism. 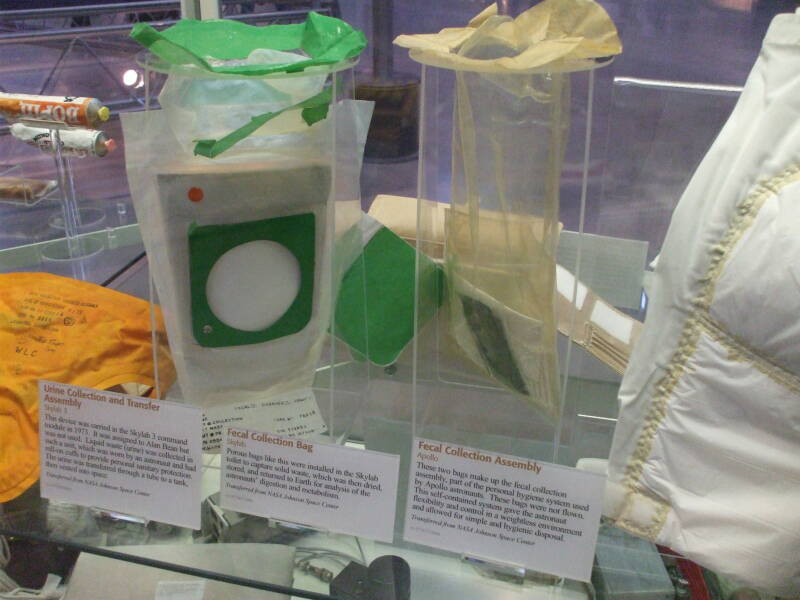 These two bags make up the fecal collection assembly, part of the personal hygiene system used by Apollo astronauts. These bags were not flown. This self-contained system gave the astronaut flexibility and control in a weightless environment and allowed for simple and hygienic disposal. 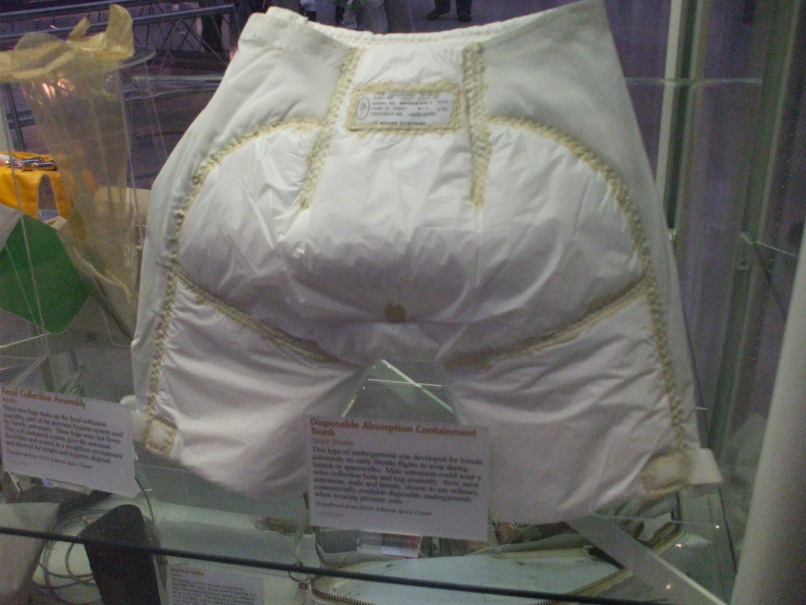 This type of undergarment was developed for female astronauts on early Shuttle flights to wear during launch or spacewalks. Male astronauts would wear a urine collection hose and bag assembly. Now, most astronauts, male and female, choose to use ordinary, commercially available undergarments when wearing pressure suits.

Continuing back in time, here is a fecal collection bag a urine transfer tube from Apollo 11, the first manned lunar landing in 1969. 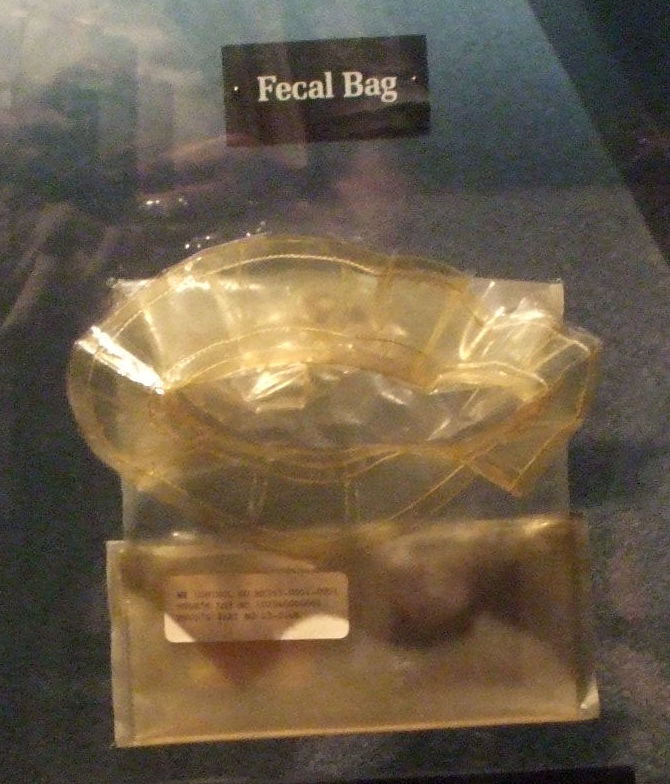 These and the one below are back in downtown Washington at the National Air and Space Museum. The placard with these from Apollo 11 reads:

Liquid waste (urine) was collected in a Urine Collection Device, used in common by the crew of an Apollo spacecraft. Roll-on cuffs provided personal sanitary protection for the astronauts using the collection device. The urine was then transferred through the Urine Transfer Tube to a tank, from which the liquid waste was vented outside the spacecraft.

Fecal matter was sealed in a Fecal Bag with a liquid germicide and sealed again in an outer bag. This solid waste was then placed into a Sanitation Box built into the spacecraft. 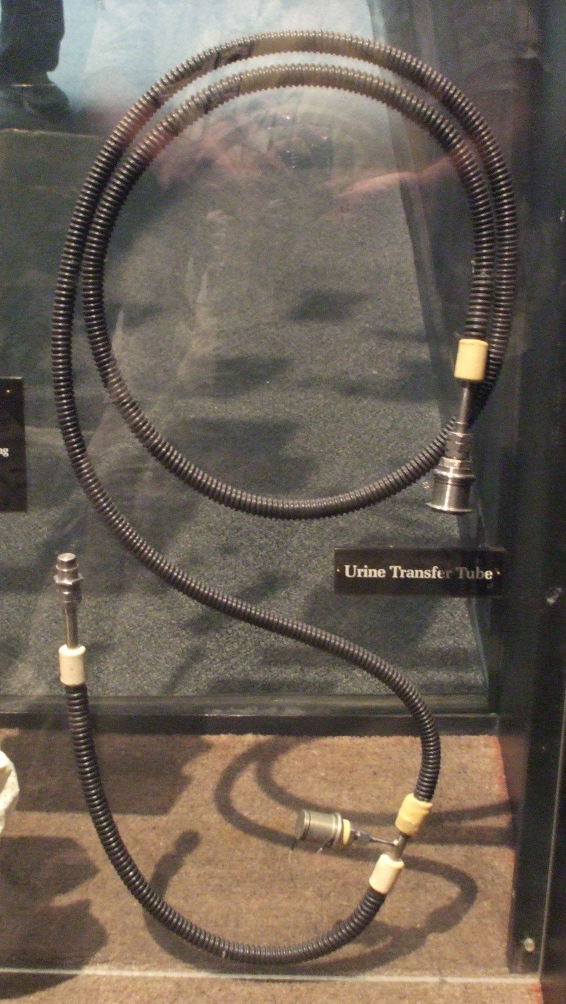 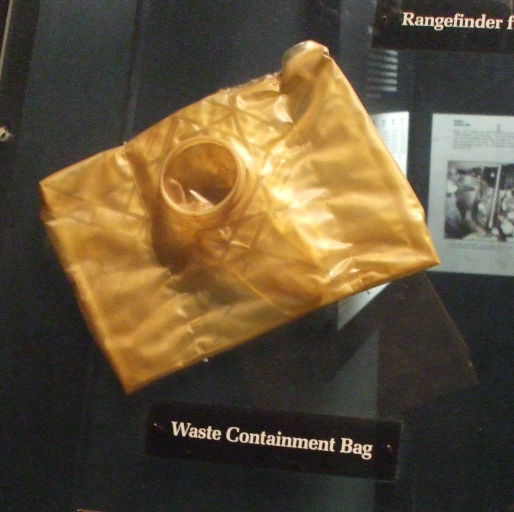 Once in a while a movie or television series will show mundane details of the future. Here are a few examples.

Early in 2001: A Space Odyssey, at 00:36:39, the character Heywood Floyd is on his way to the Moon. The movie is establishing that flight to the Moon is routine, operated by Pan-Am, with Hilton operating a hotel within a space station orbiting Earth. However, this seems to be Floyd's first trip to the moon, and he is uneasily considering how to use a toilet in zero gravity. 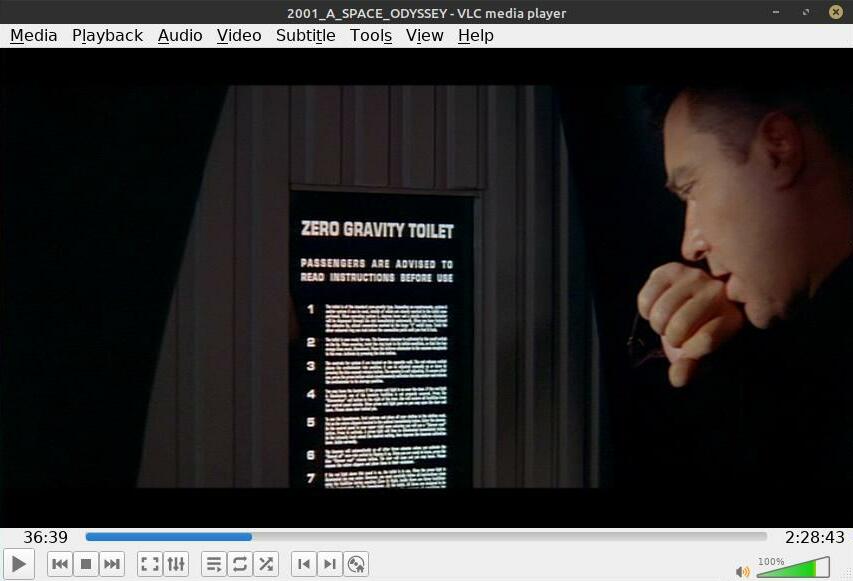 In the first season of Battlestar Galactica, in the 7th episode "Six Degrees of Separation", Dr Gaius Baltar has just entered one of the heads on board the Galactica at 00:19:08. The toilet is similar to what I've seen on the Staten Island Ferry.

Notice that on board the Galactica they use the same toilet roll alignment as on present-day Earth — over the top. 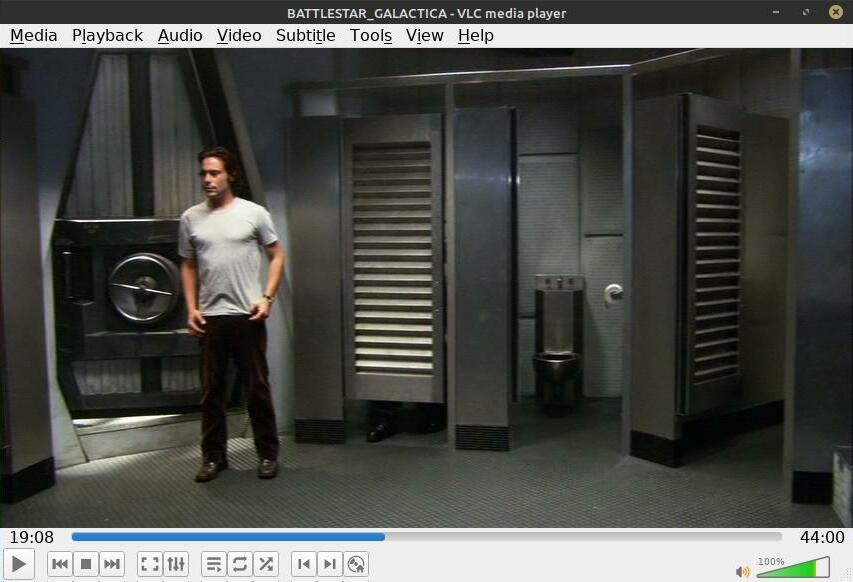 "Scattered" was the first episode of the second season of Battlestar Galactica. In the added features on the DVD set, 13:12 into the deleted scenes from the episode, we see Bill Adama and Saul Tigh before the Cylon War, in a somewhat rougher facility. 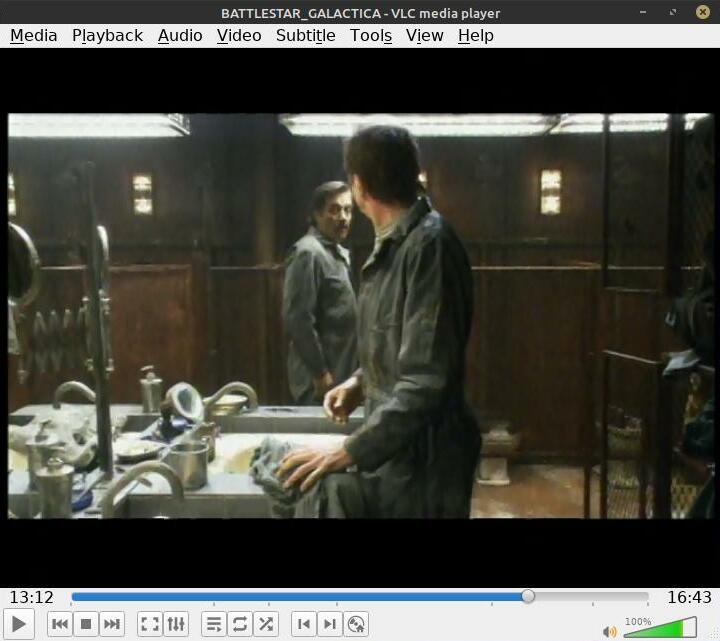 NASA cooperated with the set design of The Martian. Here we see Matt Damon's character preparing to flush the toilet in the habitat on Mars. It collects and analyzes crew excretions, which leads to his plan to grow food and survive until he can be rescued. 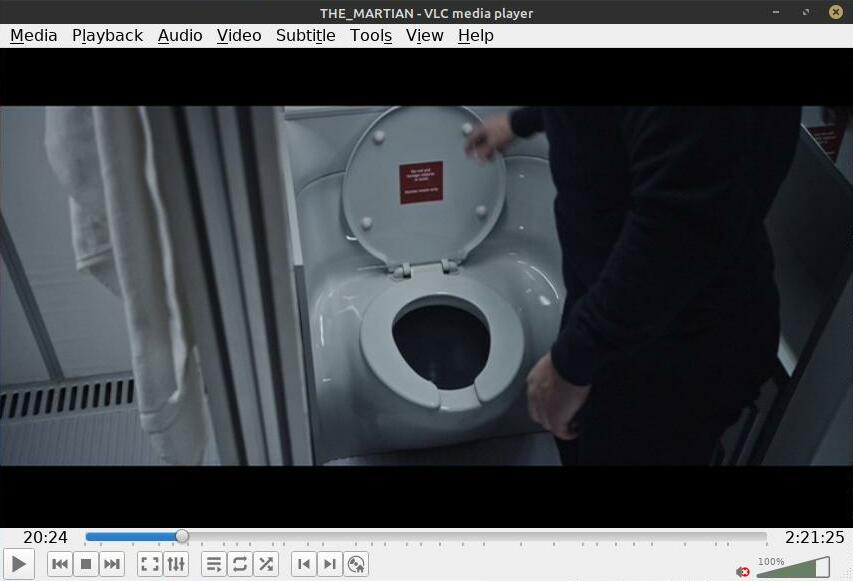 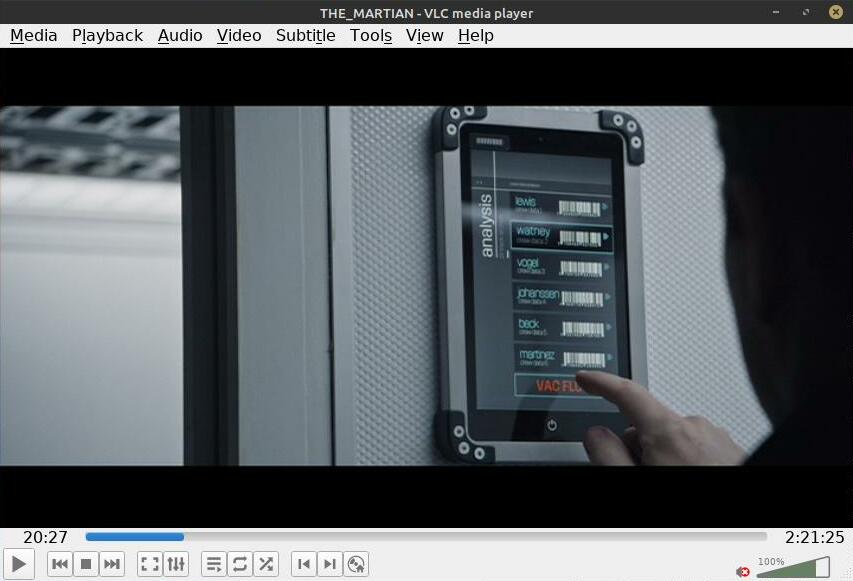