What is a Colonoscopy?

A colonoscopy is a valuable diagnostic medical procedure in which a small flexible tube about one centimeter in diameter, a colonoscope, a specialized type of endoscope, is routed through the anus and up through the rectum and up the length of the colon, typically some 120-150 cm in length. The endoscope includes a CCD camera, either a very small camera at the far tip or a lens and optical fiber leading back to a camera at the exterior end. 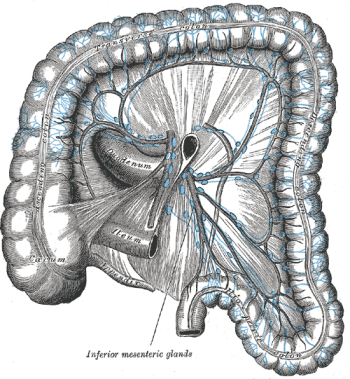 The endoscope also provides illumination through optical fibers and miniaturized instruments to remove polyps and otherwise take tissue samples. It also has tubes for both air and suction.

This allows your gastroenterologist to thoroughly examine the inside of your colon or large intestine, the final segment of your digestive tract, looking for and removing any early signs of potential cancer.

Colorectal cancer is the third most commonly diagnosed cancer in the world, significantly more common in developed countries apparently due to a diet lower in fiber and higher in red meat and processed foods. Cancer confined within the colon wall is quite treatable with surgery, but once it spreads it is usually not curable.

The endoscope is passed up to the far end of the colon to the terminal ileum, the terminal end of the small intestine where it connects into the cecum, the pouch that begins the colon or large intestine, and where the appendix branches off. The examining gastroenterologist usually can get the endoscope all the way up there in 10 minutes or less. This requires getting through four roughly right-angle corners, at the exit and entry of the sigmoid colon, at the top of the descending colon going into the transverse, and from the transverse colon down the ascending colon.

Largely digested material exiting the small intestine normally takes about 16 hours to move through the colon, with remaining absorbable nutrients and water being removed. The interior of the colon is accordion-shaped along its length, somewhat like a more exaggerated version of a vacuum cleaner hose or a clothes drier exhaust line. This shape increases the surface area per length, providing greater transfer of water from the waste material in the colon into the circulatory system. The fecal material becomes more dry and compact.

This irregular shape would make it extremely difficult to simply push the endoscope up through it. So, carbon dioxide gas is injected through the endoscopic tube to inflate the colon, making passage of the tube possible and also make the interior surface fully visible.

The bulk of the exam time, typically 20 to 25 minutes, is then spent in slowly withdrawing the endoscope and examining the interior surface as the viewpoint retreats. Polyps or other suspicious lesions can be cut with a wire loop (called cold snare polypectomy) or, if needed, the wire loop can be heated by an electrical current (snare cautery polypectomy), and then withdrawn through the tube. This technique was developed in the 1960s, since becoming quite routine and a method for removing polyps without surgery.

Biopsy, microscopic examination of the tissue, can determine whether the polyp is an adenoma, a currently benign growth which could become cancerous, or simply hyperplastic. If any are adenomas, your next colonoscopy should be done in five years. Otherwise, it will be ten years.

Preparing for a Colonoscopy

Colonoscopies are done under anesthetic, at least in the U.S., either total anesthesia or what is called "twilight sedation". Even under twilight sedation, you have no recollection of the procedure. It's the "colonoscopy prep" that you remember, and which most people find the least pleasant aspect of all. You have to clean all solid material out of the colon, and that involves some surprisingly high doses of laxatives.

Starting with when you get up Sunday morning, it's clear liquids only. Chicken broth, soft drinks and sports drinks (although nothing colored red or purple), tea and water. You need to drink a lot, "extra fluid at least every hour", and sports drinks like Gatorade to replace the electrolytes you will be losing.

You will need some supplies like what we see here — at least four one-liter bottles of light-colored sports drink, plus other clear beverages like sparkling water and ginger ale — plus several cans of chicken broth.

You also purchase an ominous amount of laxative. You are going to take four days' doses of one type plus two weeks worth of another, all within a 12-hour period.

That will motivate you to stock up on other supplies, like a large block of rolls of toilet paper, plus wet wipes, plus maybe a refill of those wet wipes. 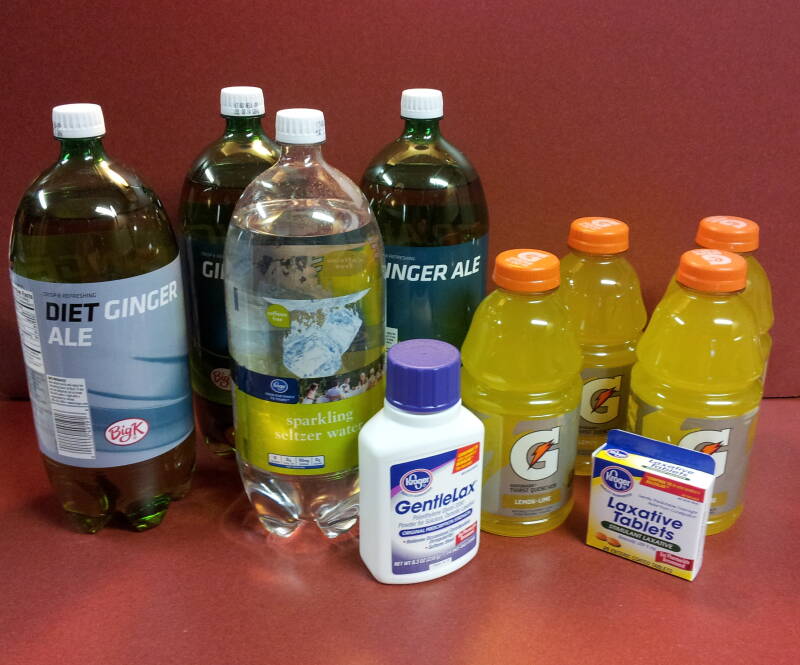 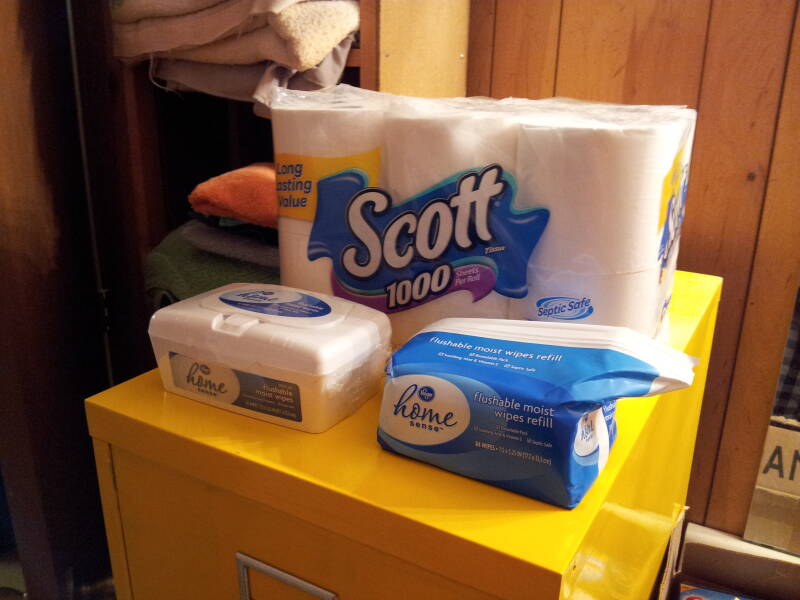 You are entering the world of whole bowel irrigation. This is the process of rapid administering a large volume of an osmotically balanced polyethylene glycol solution to flush out the entire gastrointestinal tract. Very little fluid or electrolytes are absorbed, the PEG solution mechanically flushes through the stomach, small intestine, and colon. It will be hastened on its way by a powerful stimulant laxative. 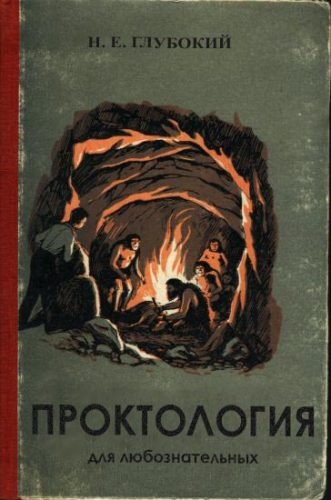 Polyethylene glycol is a long polymer of H-(O-CH2-CH2)n-OH molecules. The overall length, the number n of ethylene oxide elements, varies its physical attributes and its application. It can be a liquid or a solid. Dow Chemical produces it under the trade name Carbowax for industrial applications, and Carbowax Sentry for pharmaceuticals and food use.

Polyethylene glycol 3350 is a polymer of ethylene oxide approximately 3,350 units long: H-(O-CH2-CH2)3500-OH It comes in the form of white power that can easily be dissolved in water. The result is completely clear and mostly tasteless, although the beverage has a somewhat slippery feel in your mouth. It works by drawing water by osmotic effect into the gastrointestinal tract.

Other formulations of PEG have interestingly diverse uses. It's used to preserve wooden objects recovered after long submersion in water, making the wood dimensionally stable to minimize shrinking and warping when it is allowed to slowly dry. It's used as a dispersant in toothpaste and as an ink solvent and print head lubricant in HP DesignJet printers. And the Trident II ballistic missile solid rocket fuel uses nitrate ester-plasticized polyethylene glycol.

Bisacodyl is a stimulant laxative, working directly to stimulate the enteric nerves to cause large contractions of the colon and evacuate the bowels. The normal dose is one to three 5 mg tablets as a single daily dose.

It's a derivative of diphenylmethane, used as a laxative since 1953. Since it works on the colon, it commonly has no effect for eight hours or so as it passes through the stomach and small intestine, and then it takes effect suddenly. When you take larger than usual doses, it will likely provoke a sudden and extremely powerful bowel movement, barely controllable at best.

Meanwhile, at 5 PM Sunday (T-17 hours) you begin drinking one one-liter bottle of sports drink mixed with half the bottle (119 grams or 7 days' doses) of Miralax or other laxative based on polyethylene glycol.

You keep drinking fluids through Sunday evening to chase after the week's worth of Miralax plus four daily doses of Ducolax. At some time during the evening the Ducolax works its abrupt magic, expelling all that liquid with some force. You shuttle between the refrigerator and the toilet through the late evening. 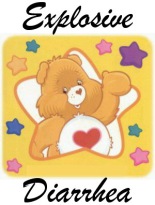 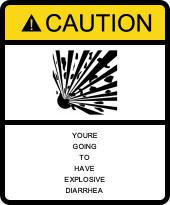 At 2 AM Monday (T-8 hours) you start drinking the last Miralax/Gatorade bottle, 119 grams of ethylene glycol in a liter of sports drink, another week's worth of osmotic laxative. You spread that out over two hours, finally finishing all that drinking and dosing at 4 AM (T-6 hours).

I had read about this and looked up the details of the laxatives, and I was anticipating something far more violent and Trident-II-like than what happened. It was like a very strong case of diarrhea, but not terribly extreme. I'm not complaining about missing out on any excitement, I'm just saying that it's not that bad.

You do know when you're getting about there when the output has the color and transparency of chicken broth. See the history of Italian Fascist abuse of laxatives for what seems to have been much worse.

To the extent that it's possible, you can sleep during the next four hours. Then you need to get to the hospital and get checked in, probably an hour before the procedure is to begin.

If you can't sleep, you might want to watch The Painted Veil. At least you don't have cholera. Spoiler alert: some of the characters have explosive diarrhea.

Then you're ready to get it over with! Off to the outpatient clinic.

You remove your clothes and drape a hospital gown down your front. They will hook you up to some monitors, and probably start an IV of Ringer's Lactate or other water plus electrolyte replenishment.

They roll your bed into the treatment room and you roll onto your left side. A syringe of something wonderfully effective is injected into the IV line. All at once you're back in the prep room and it's all over.

Your gastroenterologist comes by after giving you enough time to be fully awake and discusses what they saw and what, if anything, they cut out.

Then someone picks you up (you cannot drive yourself, and they will not release you to a taxi driver) as you're going to be a little buzzed for the rest of the day.

By the next day you're back to your regular schedule!

People with eating disorders and body image problems such as anorexia nervosa and bulimia nervosa often abuse laxatives in the mistaken belief that they will lose weight.

Laxatives will not lead to significant weight loss, as they speed movement of waste through the colon after the nutrients have been absorbed in the small intestine. You might lose some weight due to water loss, as the waste does not stay in the colon long enough to absorb the normal amount of water, but that's it.

A modern form of laxative-and-enema-based quackery goes by the names of colon cleansing, colon therapy, colon hydrotherapy, colonic irrigation, and other terms. The subjects, victims really, ingest dietary fiber, herbal concoctions, and laxatives, may be administered enemas sometimes based on coffee, and in the case of "hydrotherapy" or "irrigation" are subjected to repeated cycles of liquid introduced all the way through the colon and then flushed out. The supposed benefit is what the perpetrators claim is the removal of "putrefied feces", "mucoid plaque" or "mucoid rope", toxins, and assorted parasites.

This nonsense is based on ancient Egyptian and Greek medical beliefs and has been known to have no medical benefit since the 1919 JAMA paper "Origin of the so-called auto-intoxication symptoms".

As for the "mucoid plaque", "mucoid rope", or other made-up terms for a supposedly toxic mucus layer, there is no such thing. It is thought that some of the "cleansing agents" are actually the source of what the victim voids, as they contain bentonite clay, thickening agents, and laxatives.

Yes, there is a thin mucus layer no more than one millimeter thick on the interior lining of a healthy colon. If you managed to remove that through misguided abuse of laxatives and water-injection apparatus, then the interior surface will likely be damaged.