Did people living in the Stone Age have toilets? Yes, at least some of them did, we have found examples of indoor plumbing from the Neolithic or later stone age! Skara Brae is a large Neolithic settlement on the Bay of Skaill on the west coast of Mainland, the main island of the Orkney Islands, just off the north coast of Scotland. It is a cluster of eight dwellings and it was occupied roughly 3200-2500 BC. The dwellings contain what are believed to be some of the earliest examples we have found so far of indoor toilets.

Skara Brae is Europe's most complete Neolithic village and it was discovered only in 1850. It was well preserved when it was discovered, and the early excavations were unusually careful for that time.

The settlement was built on, and into, a midden heap from a previous settlement. That is, a mound of domestic refuse, or bluntly, an old garbage dump. That material provided insulation against the harsh winter climate at that latitude.

The structures were connected with narrow curving passageways that were also covered to protect the entire settlement from the weather. The small size and curving paths of the passageways limited the wind blowing through the communal structure.

Each of the houses, about 40 square meters in size, was based on a large square room with a hearth at its center. The hearth was used for heating and cooking. 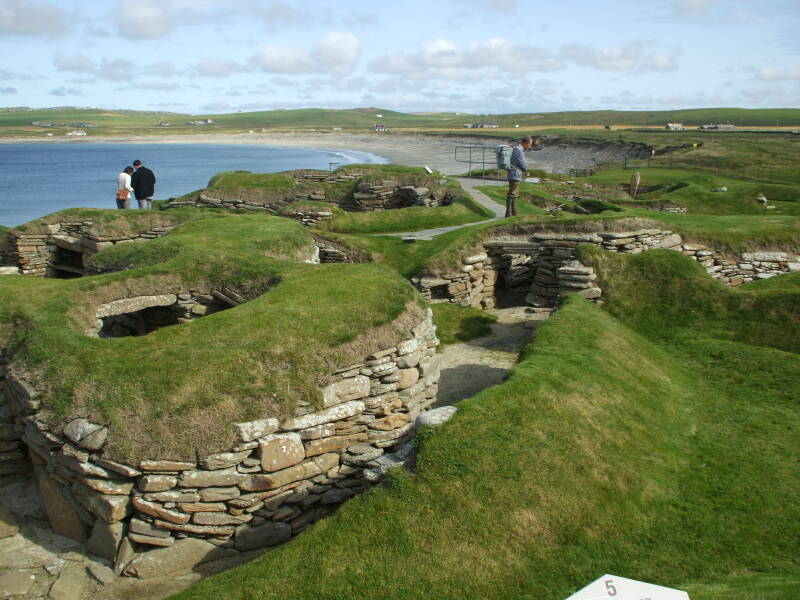 Provisional Report on the Excavations at Skara Brae, and on Finds from the 1927 and 1928 Campaigns
V. Gordon Childe and J Wilson Paterson,
Proceedings of the Society of Antiquaries of Scotland,
February 11, 1929

Some researchers concluded in the 1930s that peat was used as the fuel. However, more recent detailed analysis of vegetation patterns suggests that thick beds of peat did not develop here until after the settlement was abandoned.

Driftwood and animal dung are possible sources of fuel. The people who lived here raised cattle and sheep, and there is some evidence suggesting that barley was cultivated. They also caught fish and collected shellfish. But it's not clear that there would have been enough combined driftwood and dung available to maintain the fires through the long winters.

Dried seaweed seems to have been a significant source. There is evidence in the form of a glassy, slag-like material that seems to be a product of burning seaweed.

The walls and furniture are built from stone. The local sandstone splits into plates or sheets suiting it for certain types of construction. There were few trees on the Orkney Islands in the Neolithic era, and almost none today. They used driftwood and whalebone to form frames for the roofs. Some of the driftwood came from northeastern North America along the clockwise gyre of the north Atlantic. Sheets of turf would have been laid over that framework with thatch on top, much like what has been used in the Highlands and the Outer Hebrides through the early 20th century.

The following shows where the settlement fits into prehistoric and historic periods. Keep in mind that the later eras are defined locally as the periods when cultural and technological developments reached a given point in that location. For Britain, the eras are commonly divided as follows:

Each of the Skara Brae dwellings contained a number of stone furnishings. Seven of the structures were dwellings, following a common design. The eighth seems to have been a common work area for communal cooking and tool production. 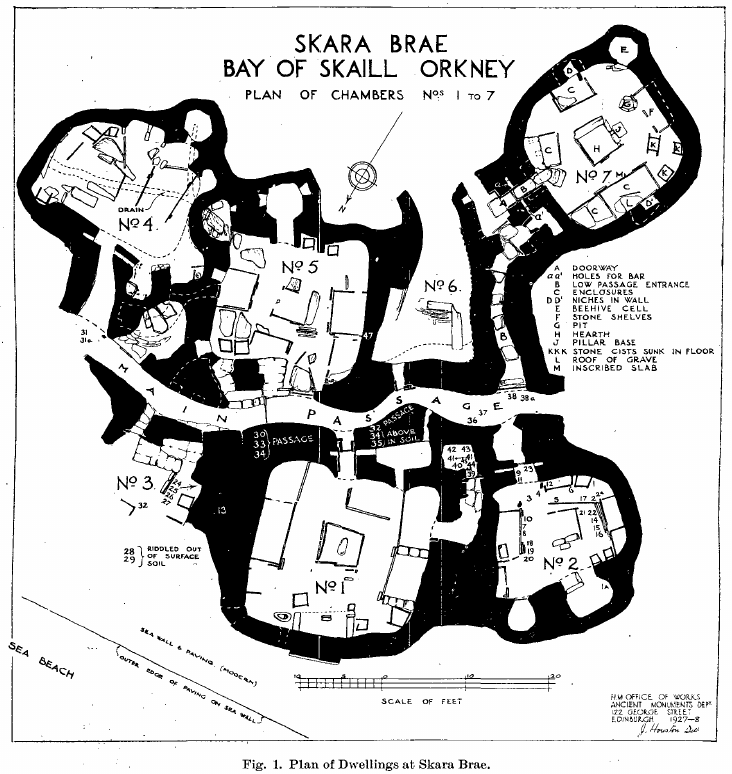 Plan of chambers 1–7 from Provisional Report on the Excavations at Skara Brae and on Finds from the 1927 and 1928 Campaigns, V. Gordon Childe and J. Wilson Paterson, Proceedings of the Society of Antiquaries of Scotland, February 11, 1929

Each dwelling was approximately square and about 40 square meters in size. The entryway was at the center of one side.

A stone hearth was at the center of the dwelling. This would have been used for heating, light and cooking.

Opposite the entrance was a cabinet, a stone set of shelves and compartments. It would have been the first thing seen when entering the dwelling, and it is thought that this layout was intentional to display important possessions.

The sleeping compartments or bed boxes were formed from thin slabs of stone extending up at least knee-high. Every room had a bed box on each of the other two sides of the main room, at left and right as you enter.

The right-side bed was the larger one in every one of the houses. Lloyd Laing's Orkney and Shetland: An Archaeological Guide compares this to a custom that survived into the 20th Century in the Hebrides Islands off the northwest coast of Scotland, in which the husband's bed is always larger than the wife's bed. Artistic material including beads and paint-pots have been found in some of the smaller beds, providing some support for this theory.

One corner beside the cabinet had some smaller stone boxes referred to as tanks, used for preparing fish bait. Presumably the thin vertical slabs of stone provided the rectangular structure and its joints were lined and sealed with sheets of fish skin or animal bladder. 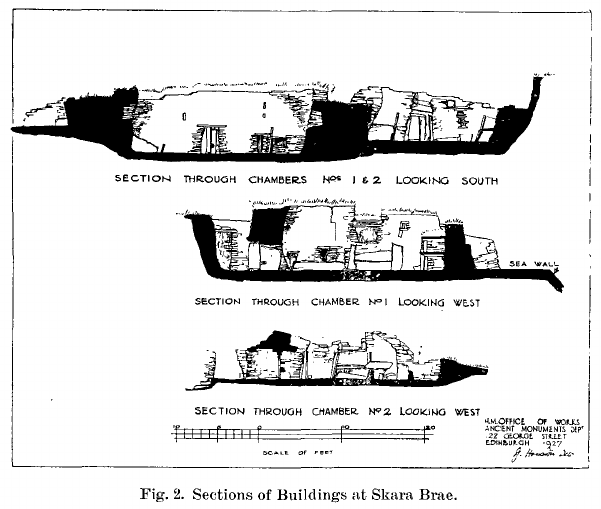 Sections through chambers 1 and 2, from Provisional Report on the Excavations at Skara Brae and on Finds from the 1927 and 1928 Campaigns, V. Gordon Childe and J. Wilson Paterson, Proceedings of the Society of Antiquaries of Scotland, February 11, 1929 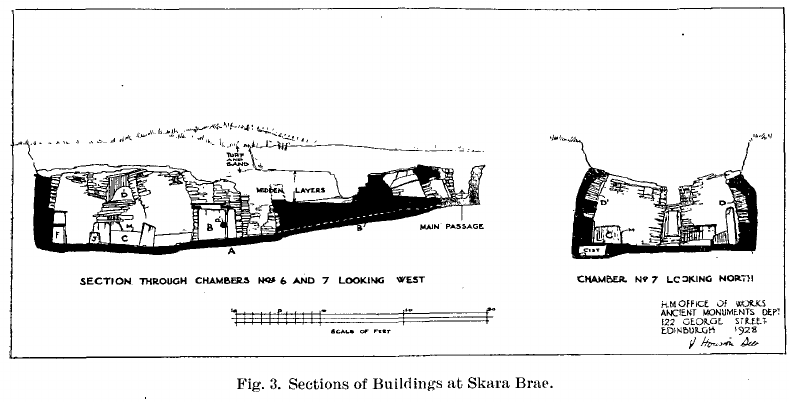 Sections through chambers 6 and 7, from Provisional Report on the Excavations at Skara Brae and on Finds from the 1927 and 1928 Campaigns, V. Gordon Childe and J. Wilson Paterson, Proceedings of the Society of Antiquaries of Scotland, February 11, 1929 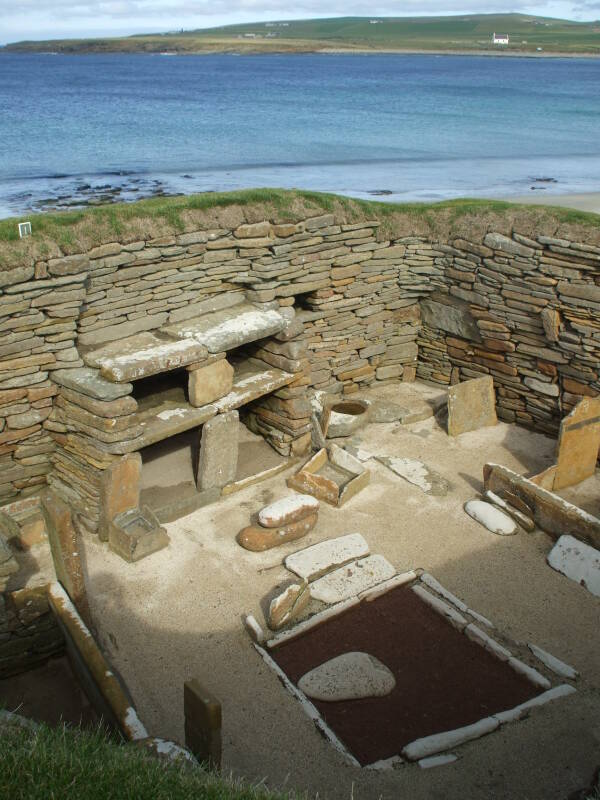 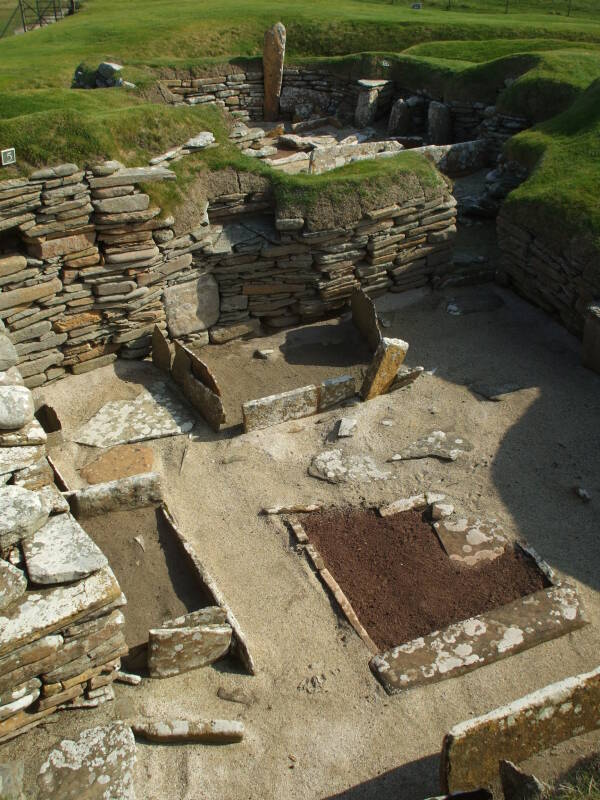 The other front corner, on the opposite side of the cabinet from the bait boxes, is a small chamber referred to as a cell in the material in the museum and at the Skara Brae site itself. The floors of the cells are up to 40 cm above that of the main room. The cells are 100–110 cm high and 90–100 cm in diameter.

This dwelling has its cell at upper right in this picture. 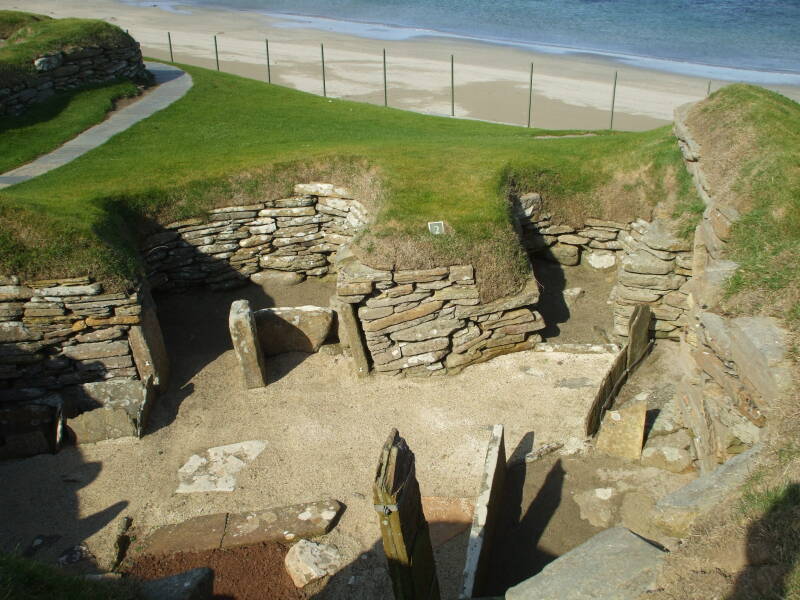 Zooming in on the plan from the 1928 and 1929 expeditions, we see a branching train that links the cells in dwellings number 4 and 5 with the outside. 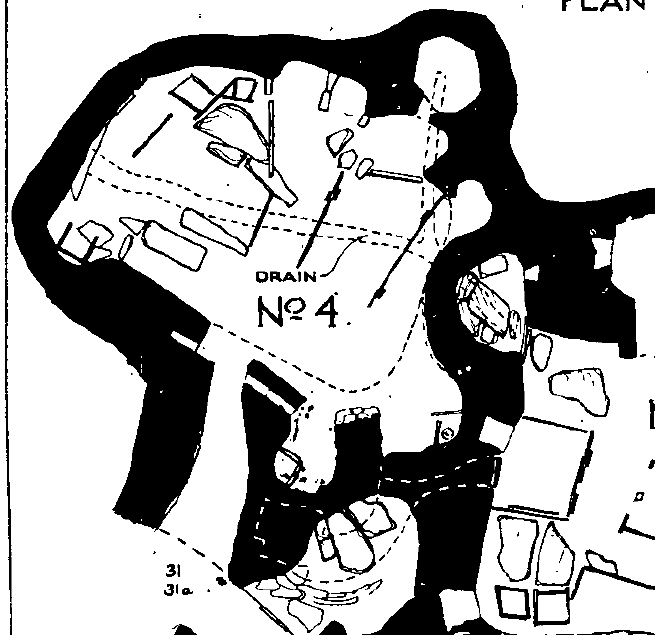 Other interpretations are more definite. For example, Pillars of the Past, Volume Four, simply states that the cells were a primitive form of toilet.

Skara Brae was clearly not a large settlement and its people could easily have left their filth in the nearby fields to act as fertilizer. With a population estimated from between 50 to 80 people, they had to go out of their way to construct at great cost and effort a sewer system attached to what were apparently separate toilet rooms, thousands of years before such conveniences had become common in the first millennium cities and towns in the ancient world.

So, are the Skara Brae cells Neolithic era toilets?

A 2020 paper reported that the Neolithic era coprolites at the site were from domestic dogs, who were probably eating the community's meal refuse, plus the local voles. It was all dog poop, not human.

The cell of this dwelling is at upper right in these views.

This dwelling is unusual in that it has a "secret compartment", a sizeable storage area behind its cabinet. This might have been used as a secret storage area, although it's hard to imagine a secret lasting very long in such a small and close community. 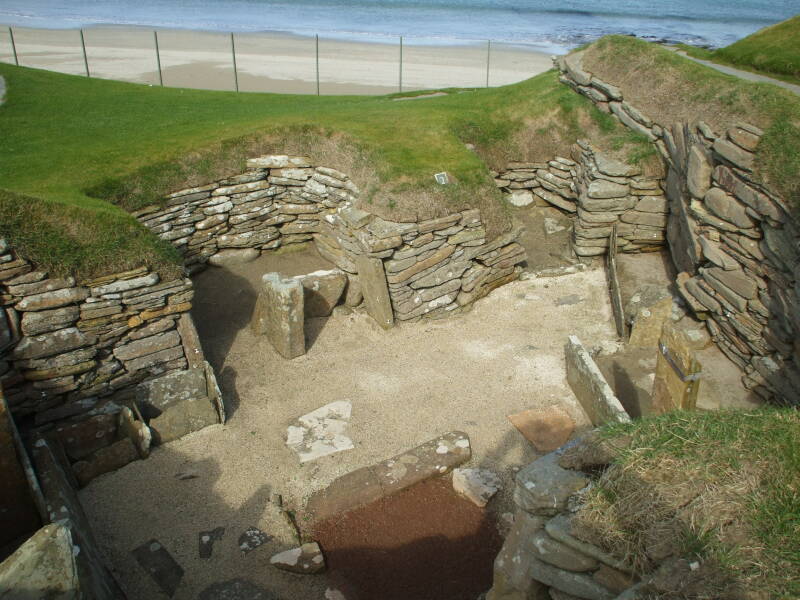 The best preserved dwelling, designated as House 7, has some very fine carvings that were starting to deteriorate as it was no longer protected by being buried in sand. British Heritage covered the house with a glass roof, but this made the deterioration worse instead of better. 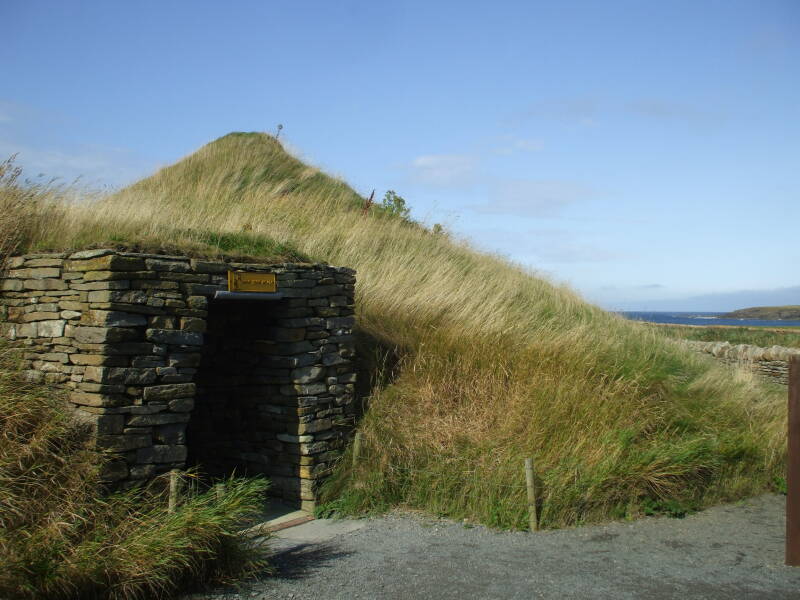 They have replaced the glass roof with one of sod, maintaining a much more constant environment inside the house. This unfortunately means that you can't see it. To make up for this, they have reconstruced an exact replica that you can enter.

This shows the mounded exterior of the House 7 reconstruction. Driftwood and whale rib roof beams would have supported a roof of turf and thatch, and grass would have soon covered that. 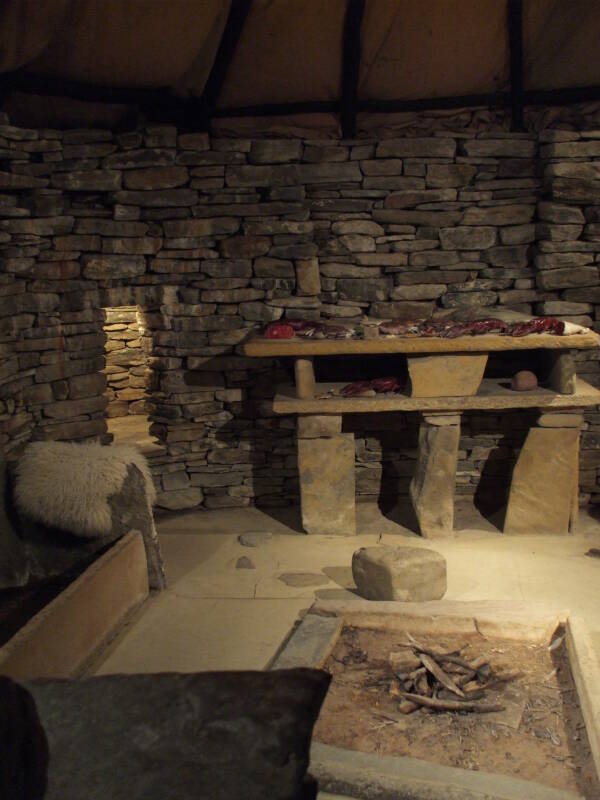 As you enter the dwelling from the narrow passageway you look across the main chamber, across the hearth to the cabinet.

One set of bed boxes is along the left wall. The cell is in the far corner at the left of the cabinet. 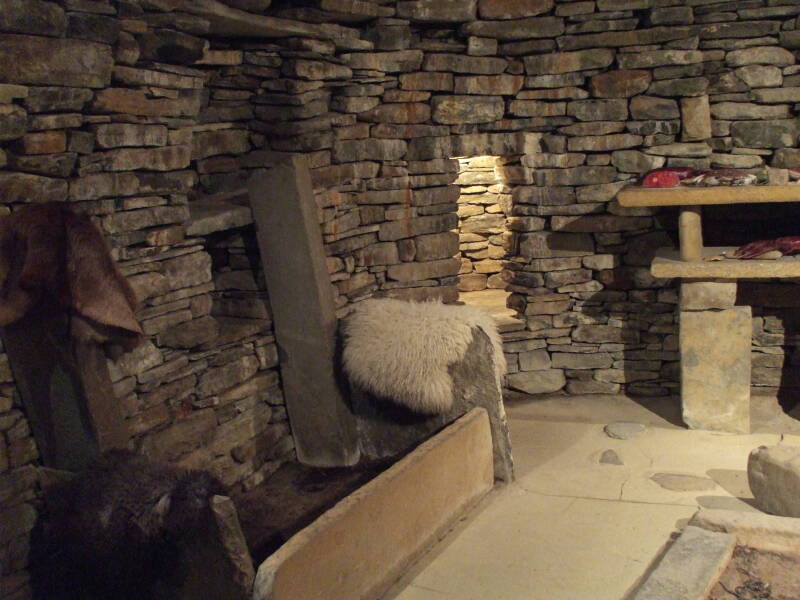 Here it is, a view into the cell. 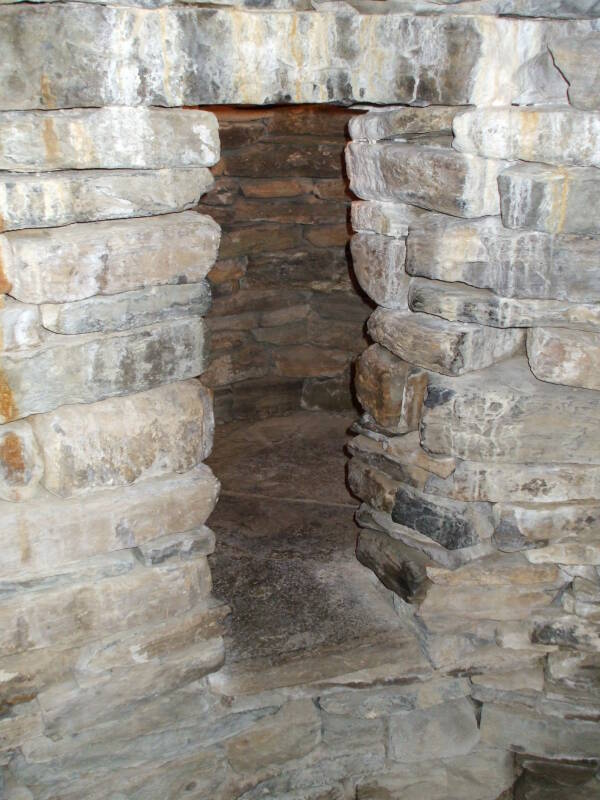 Here is a map of the UK. The Orkney Islands are just off the northern coast of Scotland.

The National Museum of Scotland in Edinburgh has a large and well-done exhibit of items from prehistoric Scotland, including quite a bit from Skara Brae. The museum at Skara Brae itself is small and mostly explains the site — the artifacts are mostly in Edinburgh.

Almost certainly if you aren't British, and quite likely if you are, you will travel to Orkney by way of Edinburgh. See the National Museum's collection before going to Skara Brae, and see it again afterward when it will make more sense. Some of the collection is available online.

Edinburgh to Inverness, 3 hours 30 minutes by bus, via Perth and Pitlochry, buses every 3 hours or so.

Inverness to Scrabster (adjacent to Thurso), 3 hours 45 minutes by bus, a few buses a day.

Scrabster to Stromness, 1 hour 30 minutes by ferry, a few ferries per day.

Once in Stromness, check the bus schedules at the Tourist Information Center at the ferry terminal. There are a few buses per day stopping at Skara Brae. After visiting Skara Brae and the adjacent Skaill House (home of the Laird who owned the land and discovered the site), you could return to Stromness via a later bus.

A better alternative if you get an early enough start is to return to Stromness on foot along the West Coast Walk. It's about 17 kilometers along the tops of the rugged cliffs along the west coast of Mainland, the main island of Orkney.