The Museum of the Sewers of Paris

Yes, you can tour the sewers of Paris.

And yes, of course I took pictures.

The Musée des Egouts de Paris is along the Seine, at the south end of Pont de l'Alma, a little to the east of the Eiffel Tower. The nearest Métro station is the Pont de l'Alma RER station. The museum has a somewhat unusual operating schedule. It is closed Thursdays and Fridays, so it's open on Saturday through Wednesday.

You pay and enter at the kiosk seen in the background here. The maintenance cover propped open is the exit from the museum.

Once you get down below street level, you walk along a passageway and then enter into the sewers themselves through the door shown below. 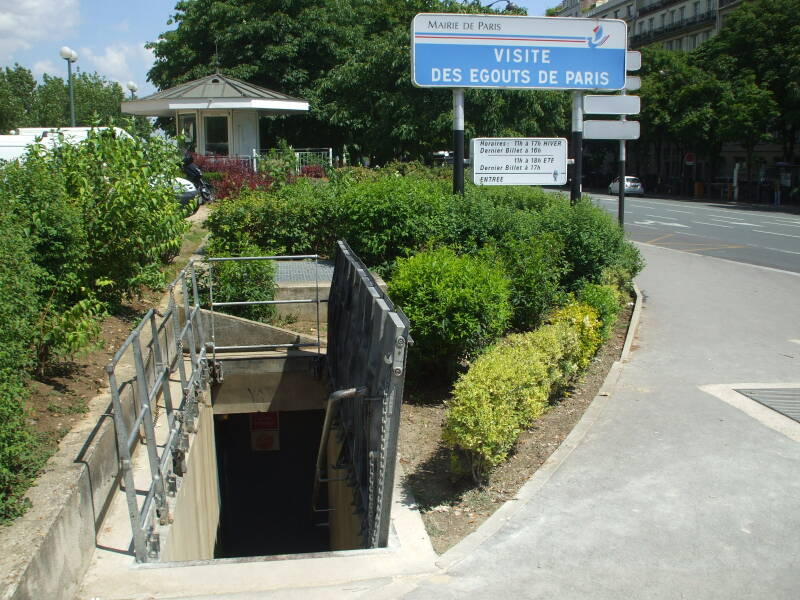 Paris has been ahead of most modern cities in waste treatment, and the tunnels have been built to a variety of specific cross-sectional shapes and dimensions. 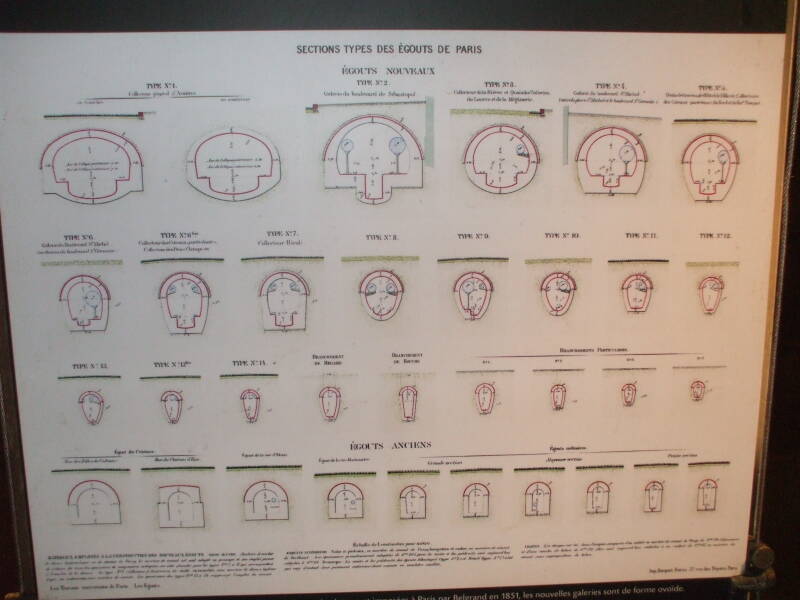 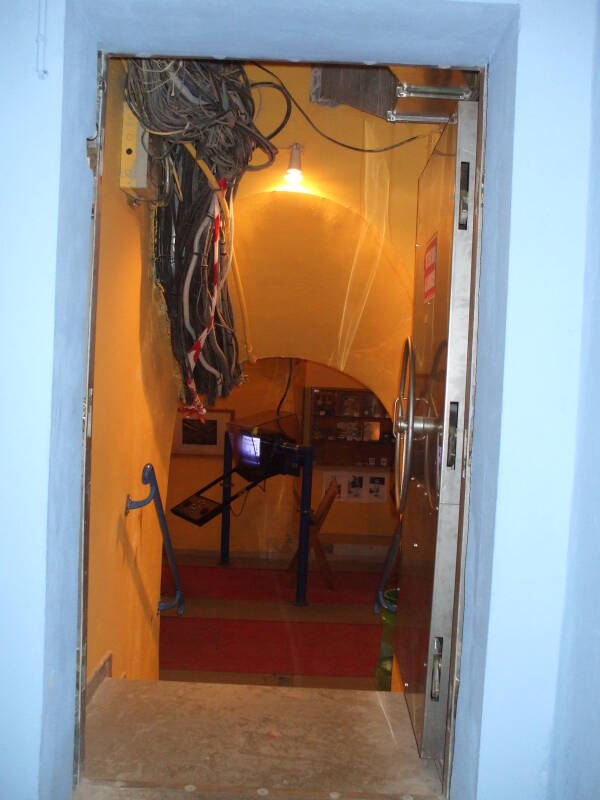 The two narrow concrete paths on either side of a central channel allow for the use of specialized wheeled vehicles for cleaning and maintenance. These maintenance vehicles straddle the central channel, as they are designed to precisely fit the standard tunnel cross-sections. 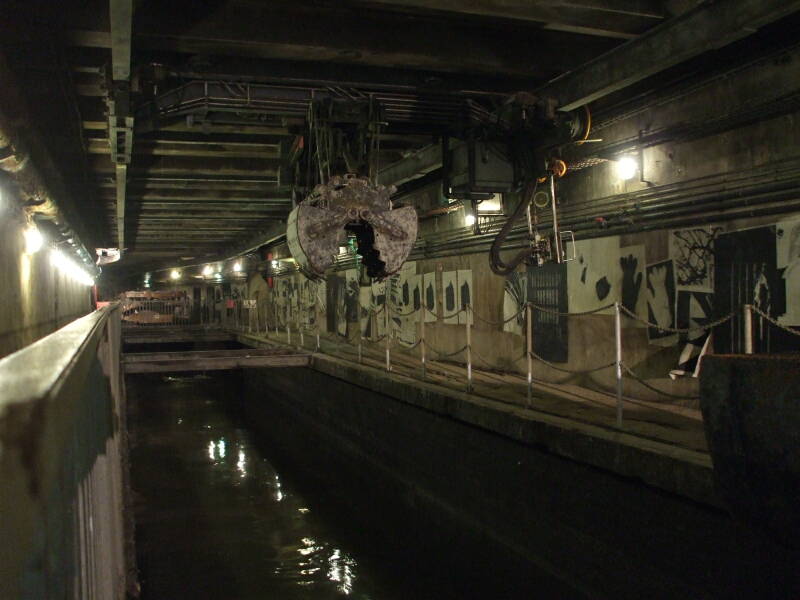 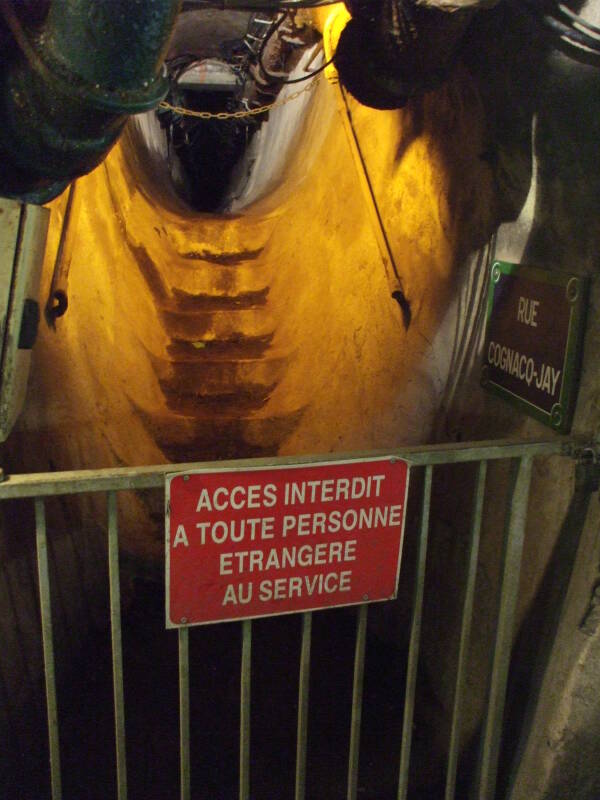 The tunnels range from small to quite large. Fairly large boats and wheeled vehicles are used to flush out some of the tunnels. 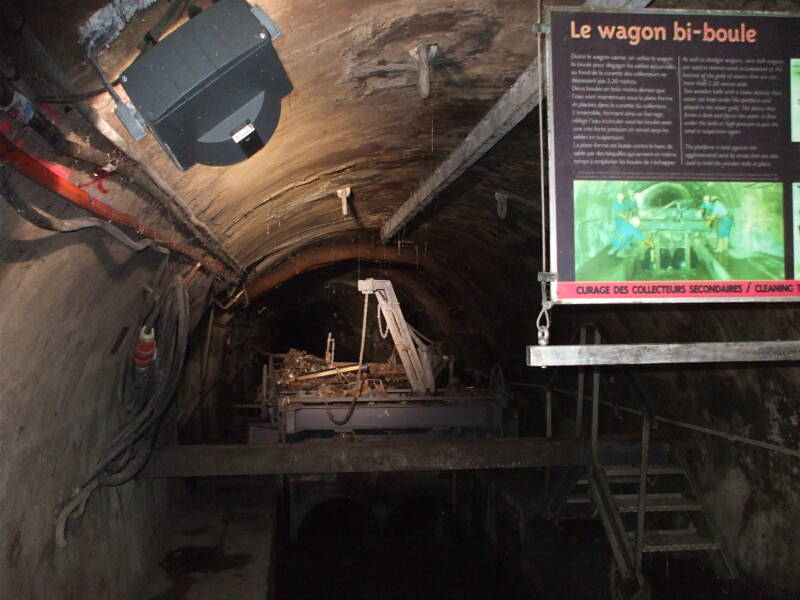 Some tunnels are cleaned with specially sized cleaning balls. Above you see a wagon used to transport the cleaning balls, and here are some of the balls themselves. 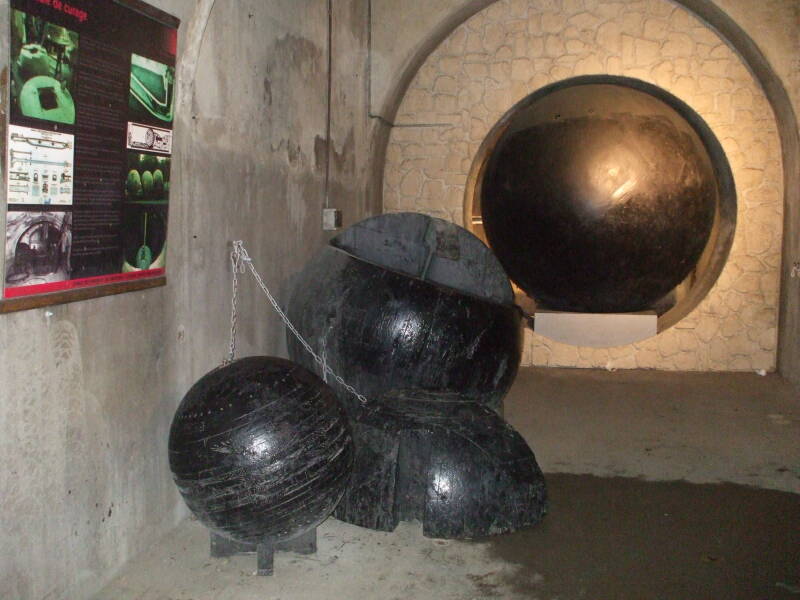 The balls are just slightly smaller than the tunnel, and they float. That forces water to pass below the ball at relatively high speed, flushing solid waste downstream and cleaning the tunnel. 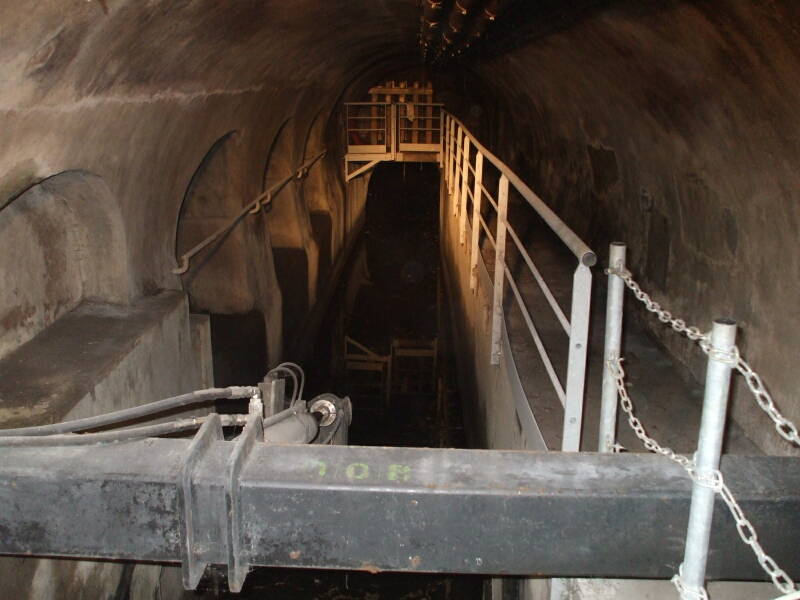 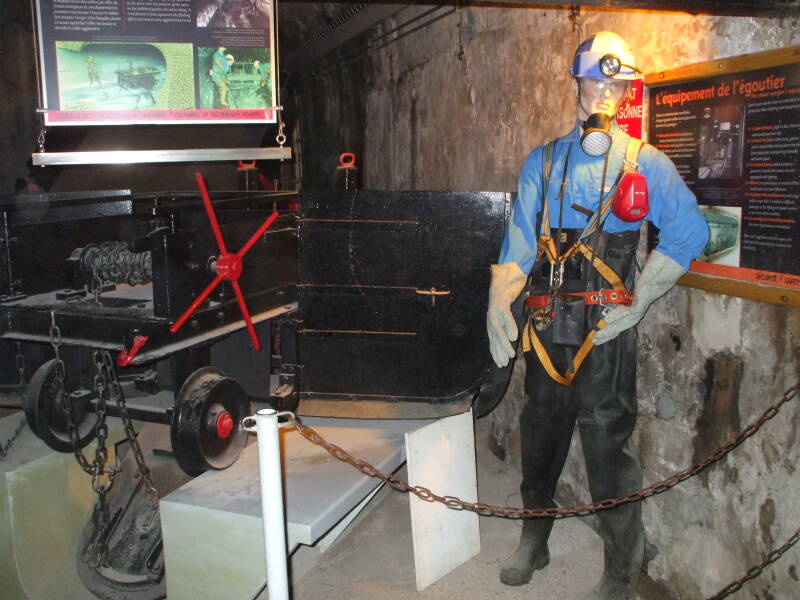 The museum shows and explains the specialized clothing and equipment used by the workers. 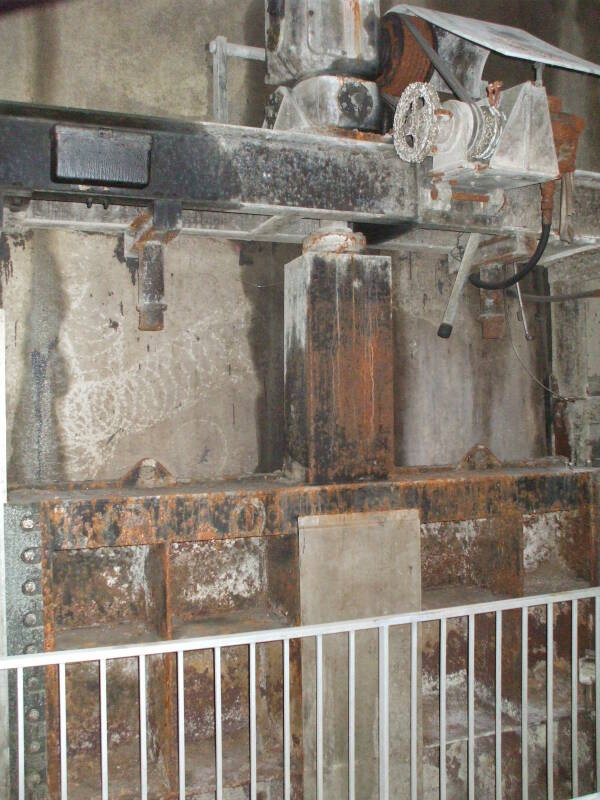 A series of exhibits explain the history of the water and waste treatment and of Paris in general from late Roman times through the present.

Until the Middle Ages, waste was poured onto fields or unpaved streets and filtered (at least somewhat) by the soil before re-entering the Seine. 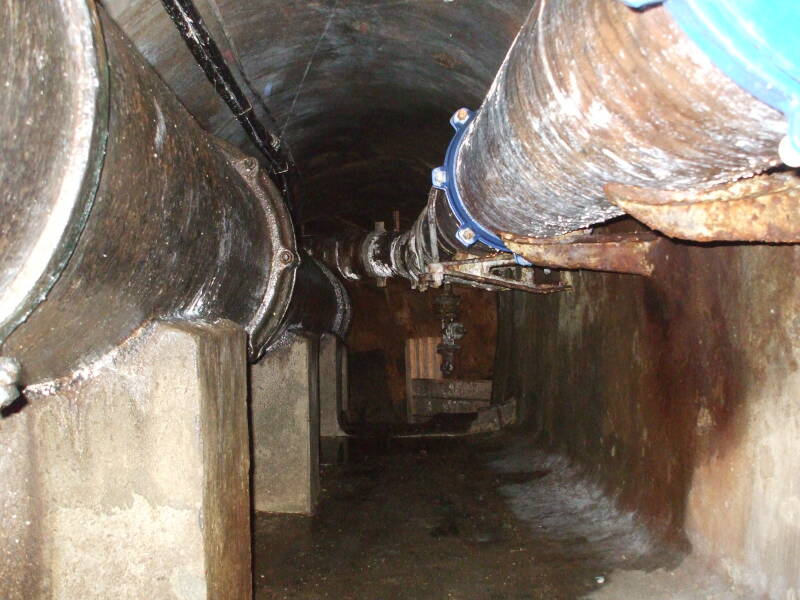 Street paving started around 1200 AD under Philippe Auguste. The paving included a waste water drain at the center.

The first vaulted stone-walled sewer was built in Rue Montmartre in 1370, by Hugues Aubriot.

And yes, of course there are toilets down within the sewer, so you can make a more direct deposit. 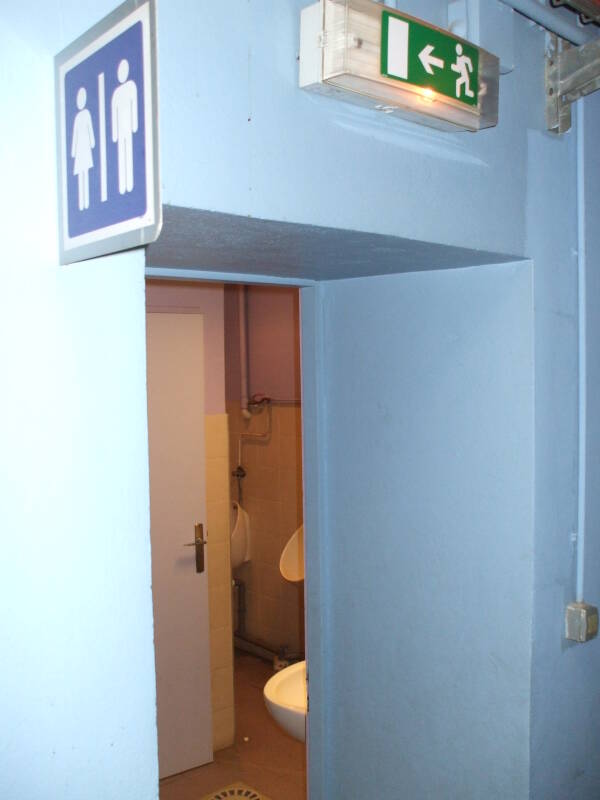 However, the sewer system as it exists today really dates from around 1850, when Baron Haussman and Eugène Belgrand designed the current system.

Where Does the Word "Sewer" Come From?

From French! And related languages...

The Oxford English Dictionary says that sewage was formed from the word sewer and lists example usage back only as far as 1834. However, sewaging meaning "The action of draining by means of sewers" was used in 1610 in Folkingham's Art of Survey in this now-arcane list of water redirection methods: "Bancking, halking, dyking, drayning, sewing, sewaging, rilling."

The word sewer is much earlier, coming into English from Latin, then Old French, then Anglo-French. The O.E.D. reports it as follows, once we expand all of its abbreviations:

The O.E.D. lists meanings including "An artificial watercourse for draining marshy land and carrying off surface water into a river or the sea," citing examples back to 1299.

In the more modern sense of "An artificial channel or conduit, now usually covered and underground, for carrying off and discharging waste water and the refuse from houses and towns," that use of the word developed around 1600.

Derivatives like sewer authority, sewer-ditch, sewer-stench, sewer-air, sewer-gas, and so on, appeared through the mid 1700s into the 1900s. Florence Nightengale is cited from her book Nursing in 1861: "A stream of sewer air coming up the back staircase of a grand London house from the sink."

An alternative meaning for sewer is cited from the 1300s up to 1864. Back then it could mean "An attendant at a meal who superintended the arrangement of the table, the seating of the guests, and the tasting and serving of the dishes. Down to the 15th century it was the designation of an officer of the Royal Household; it survived somewhat later as the title of a ceremonial office at coronations." By the 16th and 17th centuries it had been modified to shewer and shewere. Etymology: adapted from Anglo-French asseour, from Old French asseoir "to cause to sit, to seat," normal development from Latin assidēre from ad- + sedēre "to sit."

We can attempt to trace back those Anglo-French and Old French meanings. The University of Michigan's Middle English Dictionary has this listing:

(a) A trench or ditch used for drainage; seuer gate, a floodgate on a sewer.

(b) commissioun of seueres, authority or duty to oversee drainage canals; justices of seueres, ?officials who regulated the drainage of marshlands.