This map shows the two locations described here, Saint Andrews and the Isle of Iona.

A Pictish stronghold was once on the site of Saint Andrews, Scotland, and records from 747 report the death of an abbot. In the 12th and 13th centuries, the settlement was known as Kilrymont (a Normanized spelling of the Gaelic Cell Rígmonaid) or Muckross.

The Church of Saint Regulus was built in the 900s, commemorating the legendary arrival of that saint bearing the relics of Saint Andrew.

Franciscan and Dominican monks had properties in the town by the late 1400s and possibly as late as 1518.

The cathedral fell into disuse during the Restoration, and the cathedral was stripped of its altar and images in 1559.

One of the few priory structures left is the necessarium, the communal toilet facility. In the 19th century the term reredorter was coined, from the Middle English prefix rere- (from Anglo-French) meaning "behind" and the medieval term dorter for the monastic dormitory. 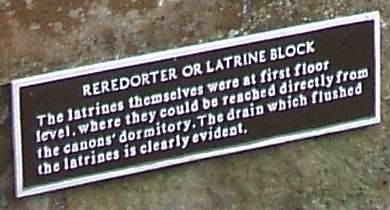 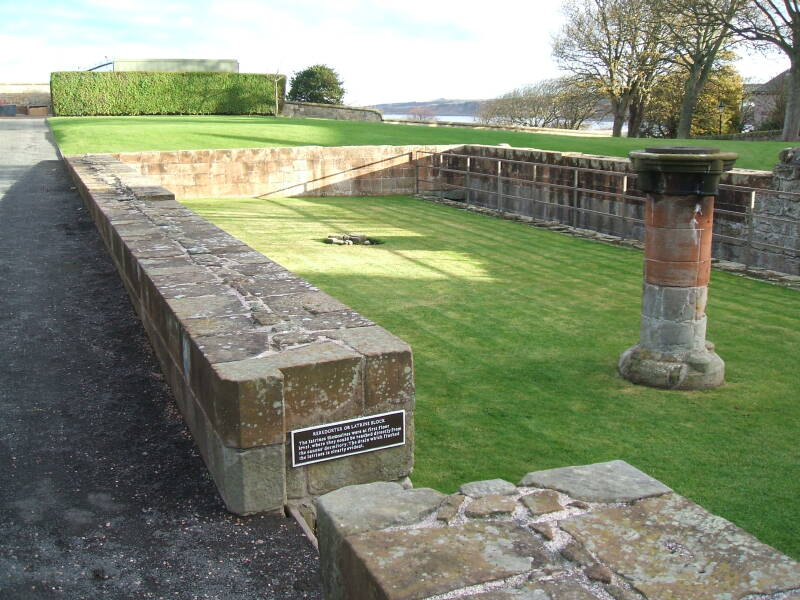 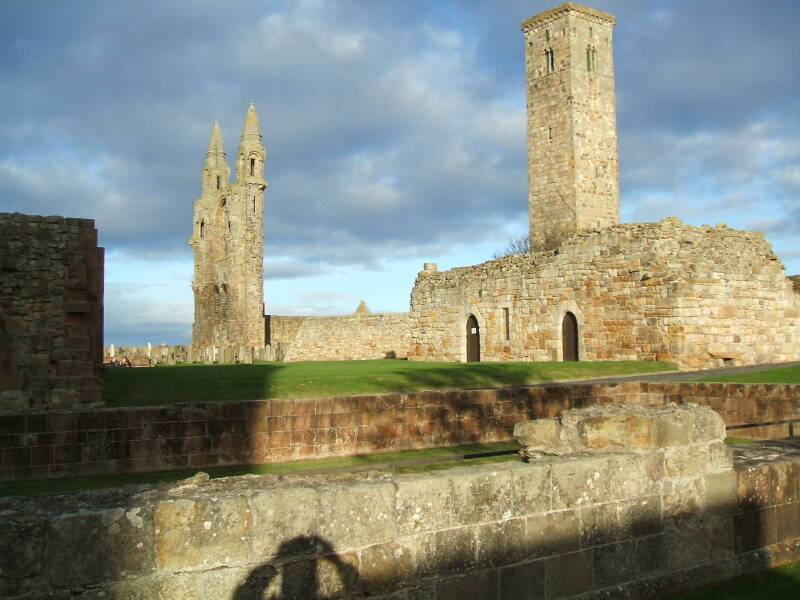 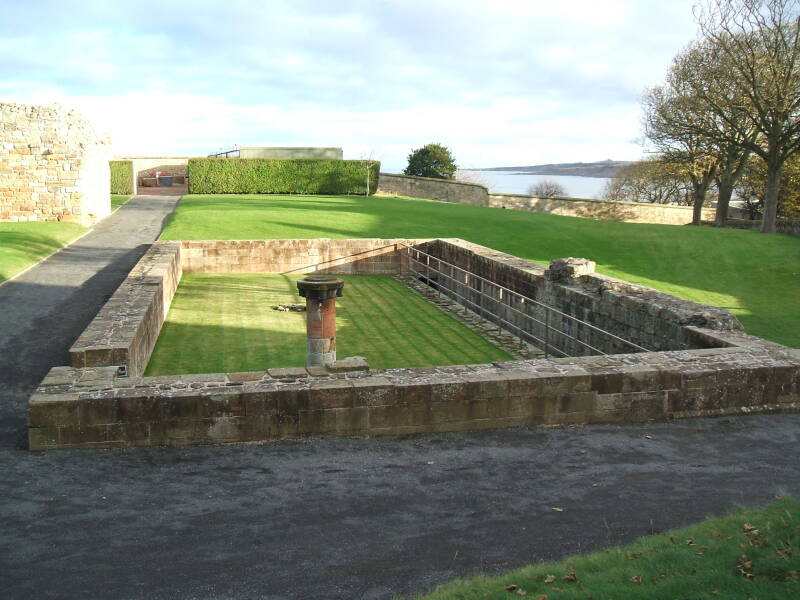 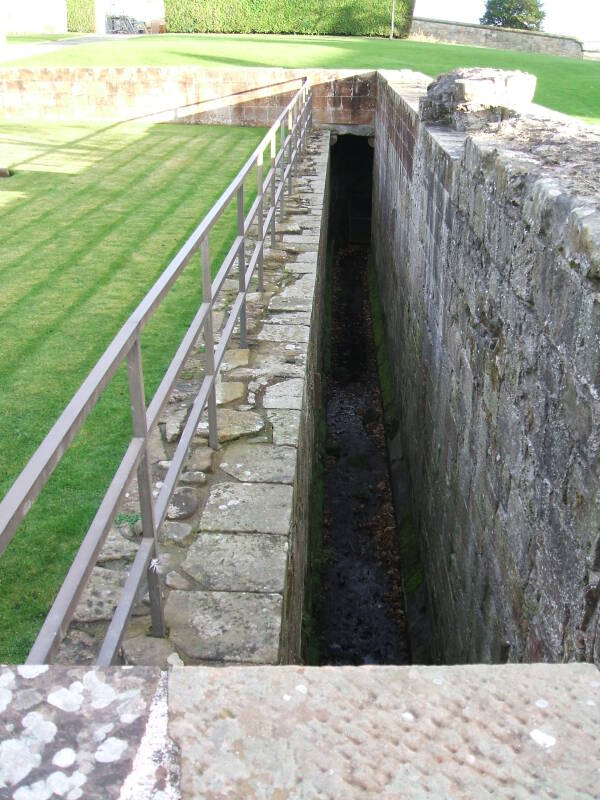 The Isle of Iona is a small island in the Inner Hebrides, off the north-west coast of Scotland. It's small — just 1.6 km east-west and 5.6 km north-south with a resident population of 125. It's just about 1.5 km across the narrow Sound of Iona from the larger Isle of Mull. Its Gaelic name is Ì Chaluim Cille, meaning Saint Columba's Island.

Its highest point is an Iron Age hill fort on Dùn Ì, 101 meters high. It is speculated that it was a sacred island in the pre-Christian Iron Age civilization of the Hebrides. There is no physical evidence for this, but it might explain its selection for what followed.

In 563 Colm Cille, later known as Saint Columba, was exiled from his native Ireland because of his involvement in the Battle of Cul Dreimhne. He came to Iona with 12 companions and founded a monastery from which they set about the conversion of Scotland and much of northern England to Christianity.

It's believed that the Book of Kells was created on Iona in the late 700s. A series of Viking raids on Iona began in 794 and the book, relics of St Columba and other valuables were taken away, including the book being taken to Kells in Ireland for which it got its name.

The current Benedictine abbey, seen here, was built starting in 1203. A nearby convent for the Order of Benedictine Nuns was established in 1208. The abbey flourished until the Reformation.

The Iona Abbey itself was granted to the Church of Scotland. It was rebuilt in the 1930s when the Iona Community was formed, an ecumenical Christian community. It has more recently become a site of Christian pilgrimage and retreat. 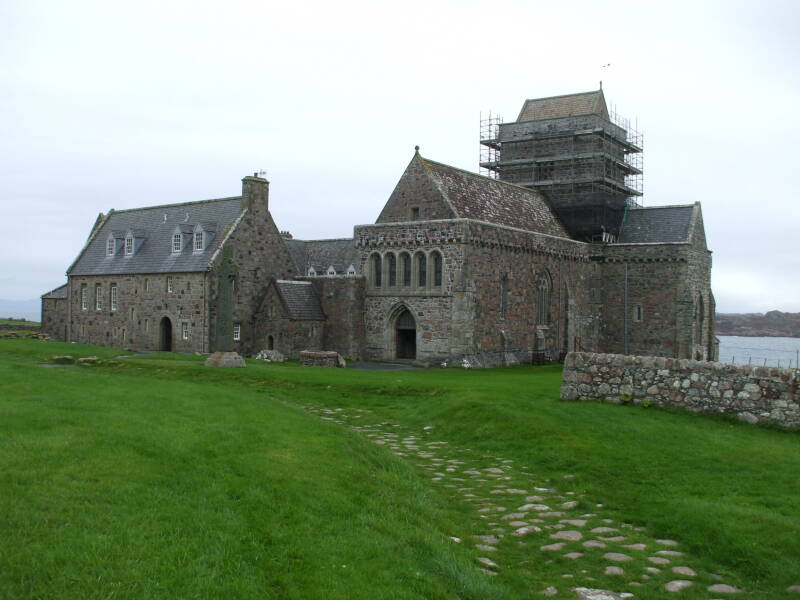 When you're looking for eccelsiastical toilets, look for the necessarium or reredorter.

The maps and diagrams at the abbey indicated that this building was the reredorter. Notice the small rectangular opening near the corner. 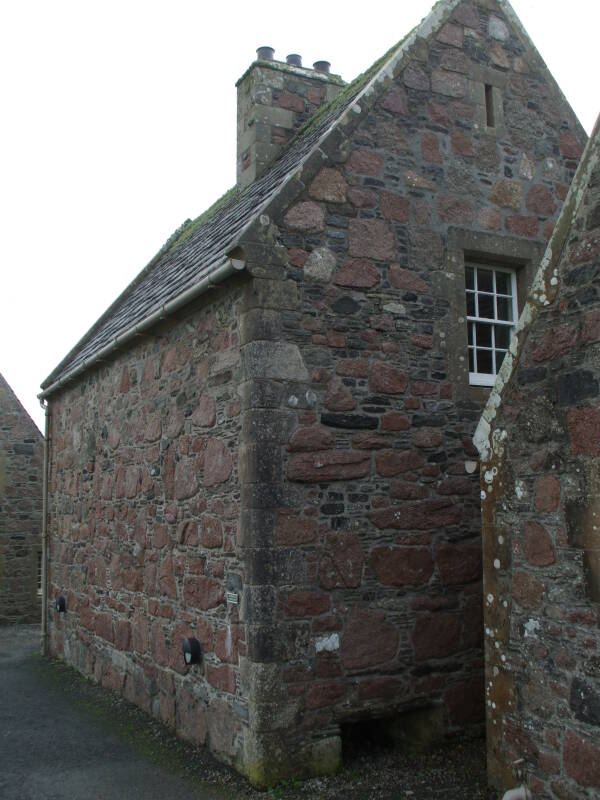 Yes, here's a sign at the corner of that building!

Once you find the reredorter itself, there's an explanation of just what that name means in modern English. 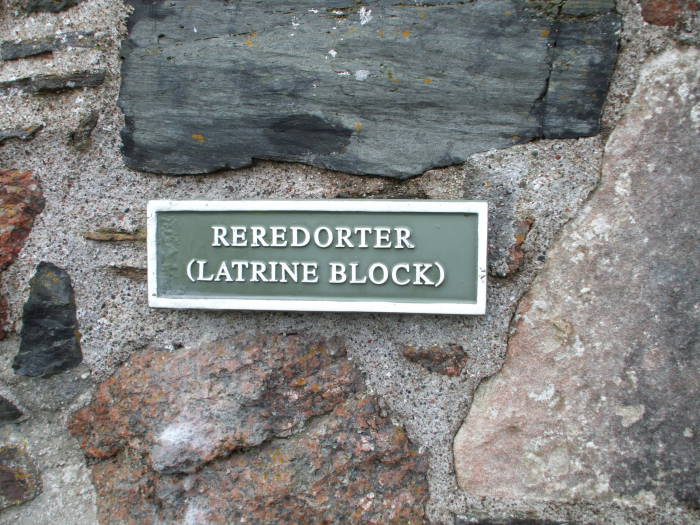 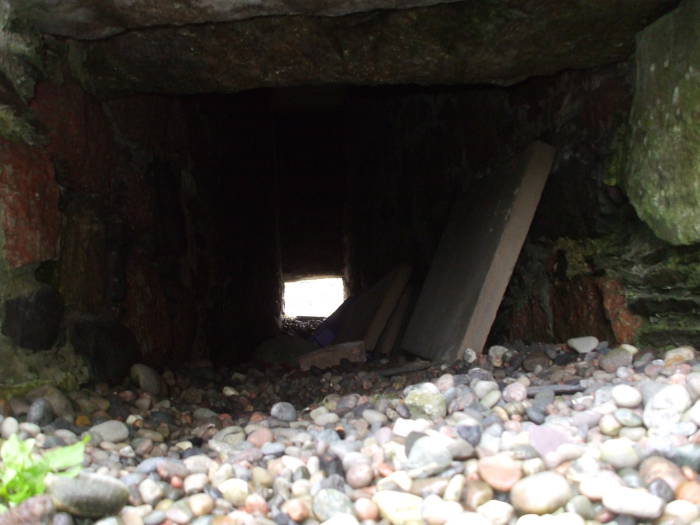 And here's all there is to see — what looks like a narrow crawlspace running the length of the building.

Back in the days when this was a functioning necessarium, you would not have wanted to crawl through here!

The toilets would have been a series of seats on holes through a long bench directly above this rectangular trough.

Water would have flowed through here, carrying the waste down to the nearby shoreline.

This is the nearby Benedictine convent, close to the modern ferry dock and on the edge of the village of Baile Mòr.

Its reredorter seems to have been under this modern road running between the convent ruins and the local school.

So no more than a site-of picture for the convent itself... 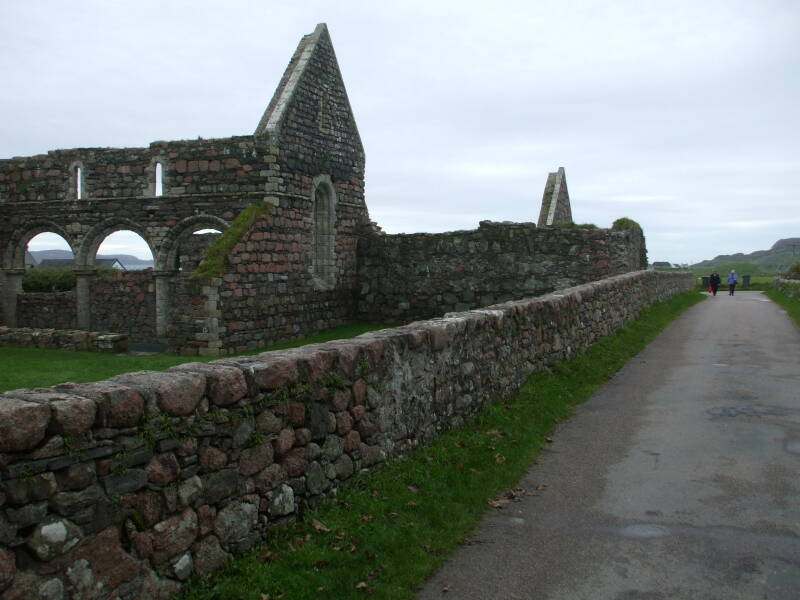 If you're interested in visiting, the easiest way to get there is to a bus or train to Oban. Several ferries per day run from Oban to Craignure on the Isle of Mull. A bus meets each ferry for the roughly 1.25 hour trip across Mull to Fionnphort. From there the ferry runs back and forth across the Sound of Iona to the ferry ramp at the village of Baile Mòr. The ferry runs constantly all day, making a round trip every 30 to 40 minutes.

The book Artifacts from Medieval Europe by James B. Tschen-Emmons, 2015, references this page.

Also see the Arthurian Toilets page for other ecclesiastical toilets of similar vintage.