Claude Monet is one of the essential impressionist artists. His home in Giverny in upper Normandy is an easy day trip from Paris. Visit it, if you get the chance!

And, since further renovations in 2011 and 2013, you can now see his bathroom and his wife's bathroom, in addition to their kitchen sink and Claude's hydraulic project that features in so many of his wonderful paintings.

The Vernon-Giverny train station is about a 50-minute ride from Paris Gare St-Lazare. Then there's a shuttle bus timed to meet most trains through the day, or it's a pleasant one-hour walk along the Seine to his home in the village of Giverny.

Yes, his home really is painted pink with green shutters and doors and trim. That sounds strange, but I'm not going to argue with Claude Monet's color choices. 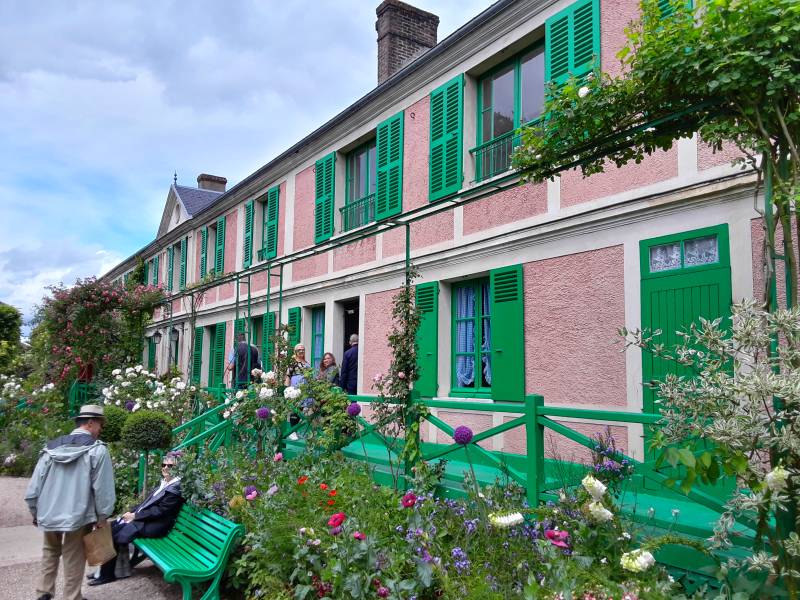 More on Monet's home at Giverny

The house is long and narrow, built along a lane through the village. His bedroom is on the top floor at the north end, a large room spanning the width of the building. That's the far end as seen in the above picture. Below, we're in his bedroom. 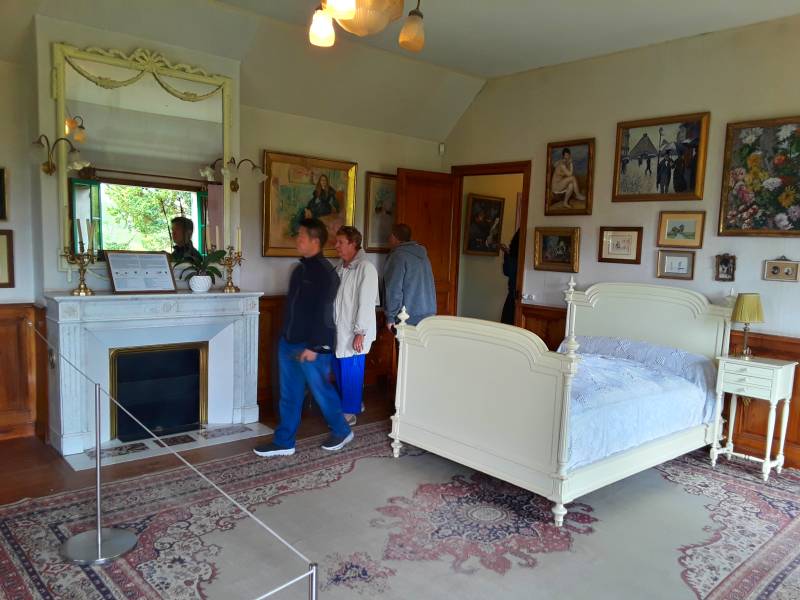 The people are entering the room from the narrow hallway connecting to the staircase from the ground floor. The house was filled with artwork. His studio was directly below his bedroom, with large windows looking out to his garden and providing north light. A separate building adjoining the south end of the house, now the book and gift shop, was where he painted his larger pieces, including mural-sized studies of water lilies.

When Monet lived there, his works underway would be in his studio. He typically worked on several pieces at once.

The rest of the house was filled with the Japanese prints that he loved, and paintings by other artists of the time. They would trade and exchange works back and forth.

Monet's print collection remains in the house. But now all those paintings are in major museums and private collections around the world. The foundation that maintains his home has commissioned art school students to paint reproductions. The studio has reproductions of prominent pieces by Monet, a "greatest hits" collection that doesn't represent the room at any specific time. The other rooms have reproductions of the pieces that actually hung in those locations, based on photographs and written descriptions by visitors and family.

Turn to your right and pass through the door on the other side of the bed. Below we have done that, and turned to look back into the bedroom. 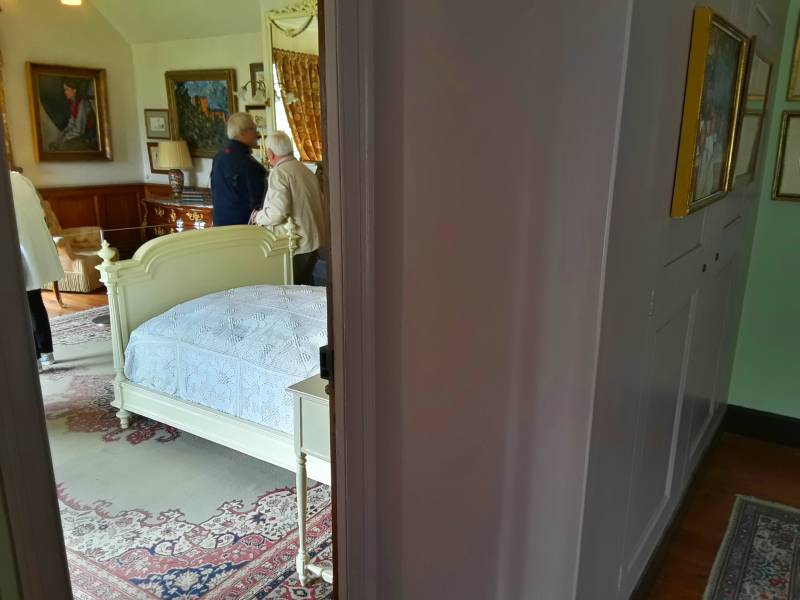 We are standing in Claude Monet's bathroom.

And yes, he really had paintings by Paul Cezanne and other now-famous impressionists hanging in his bathroom. 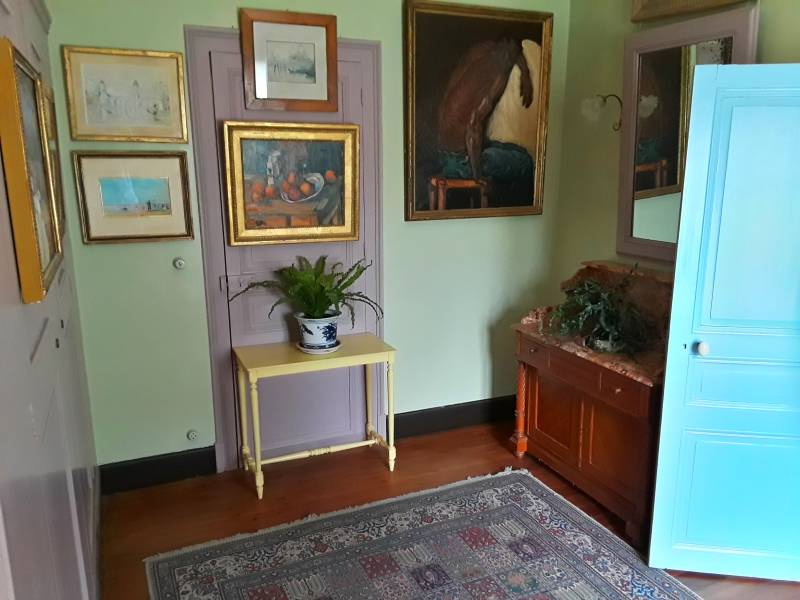 The marble-topped cabinet in the far corner is his bathroom sink. There's a potted plant in the sink now. 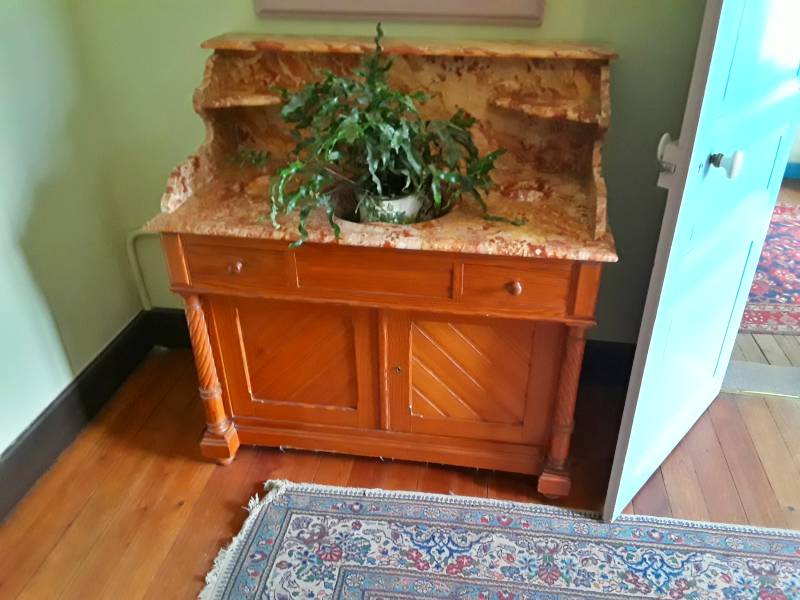 There are small depressions on either side of the sink, oval to the left and round to the right. Maybe these were for soap?

As you can see, there was running water up here, and a drain for the sink. 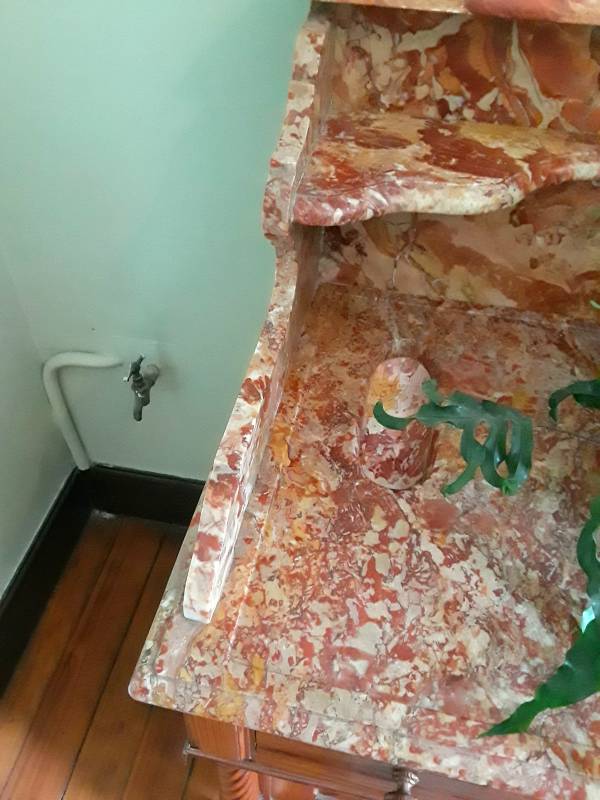 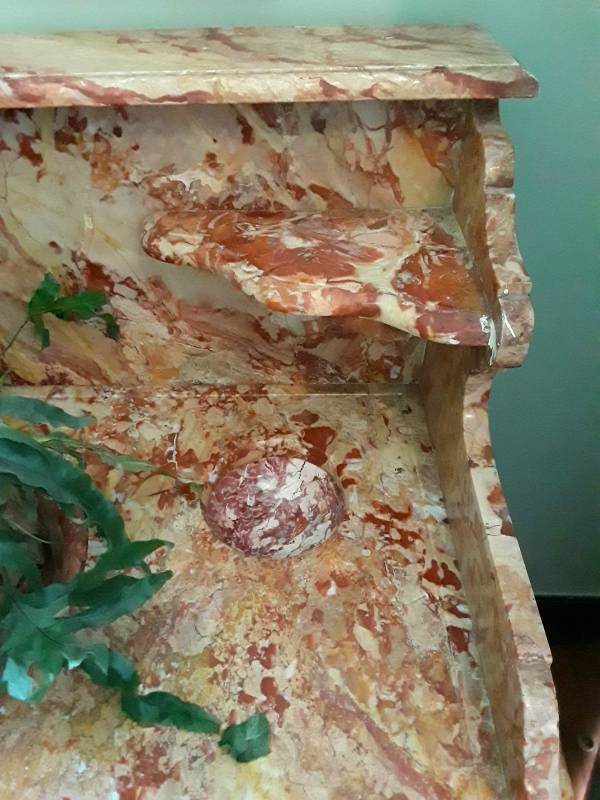 There's no toilet in Claude Monet's bathroom. He lived in a small village and died in 1926. He would have used a chamber pot at night, and gone to an outhouse during the day.

His step-daughter lived here until 1947. There was no sign that her room connected to a bathroom with an indoor toilet. World War II had started in September 1939 and ended in April 1945 in Europe, so my guess is that she and most villagers would still have been using chamber pots and outhouses in 1947. 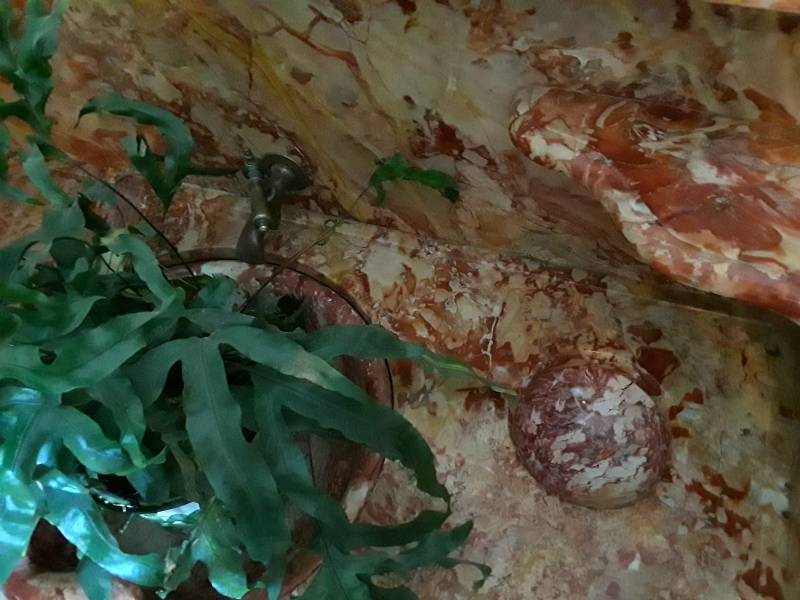 But meanwhile, let's move on to the next room.

This is the bathroom of his second wife, Alice. 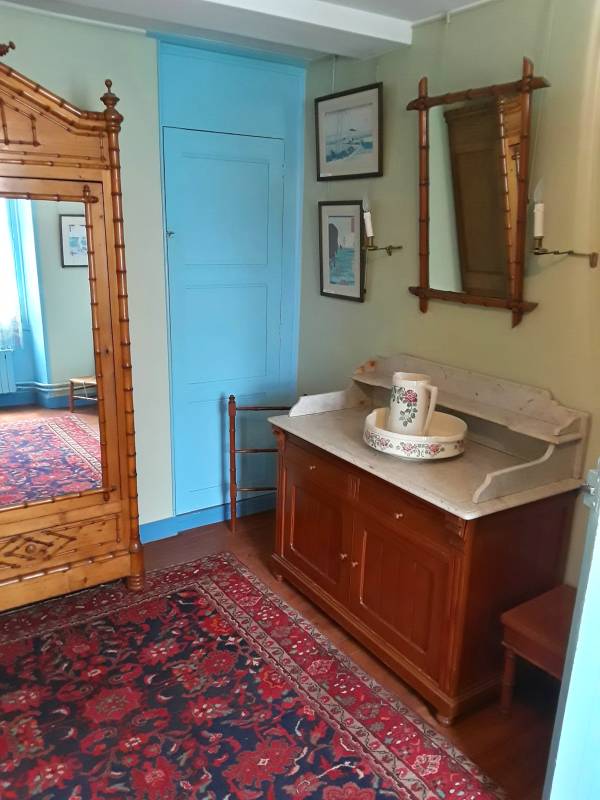 Alice's bathroom seemed to not have running water. But she could have stepped next door into Claude's and filled the water pitcher. 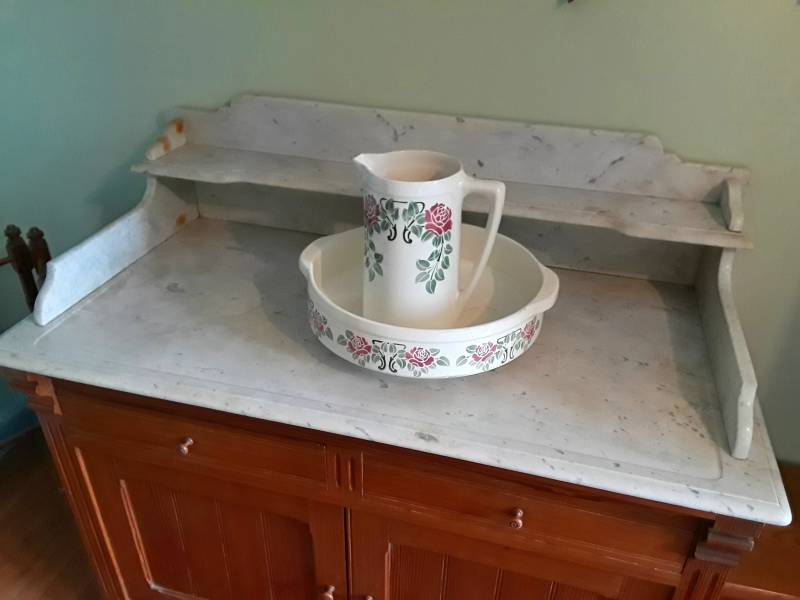 The kitchen is on the ground floor, almost at the opposite end of the house from Claude's studio and bedroom. It has a large sink, near the large oven and iron stove. 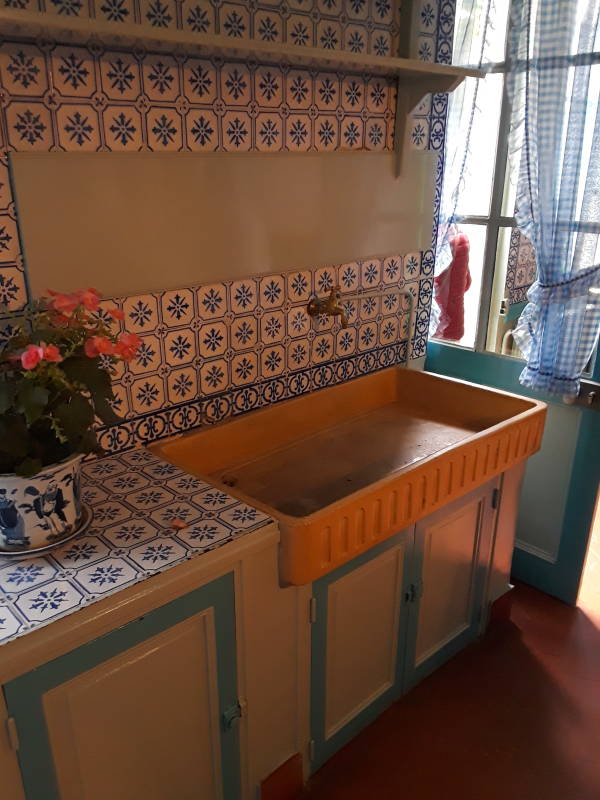 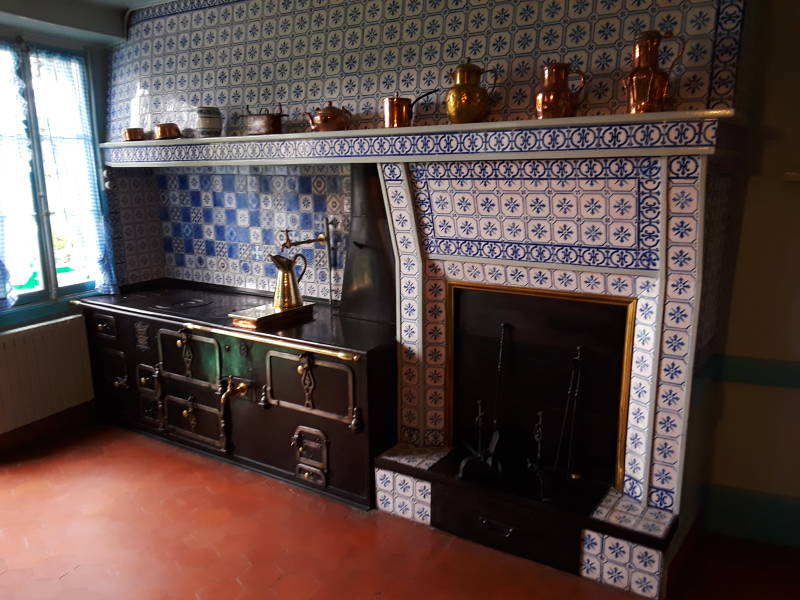 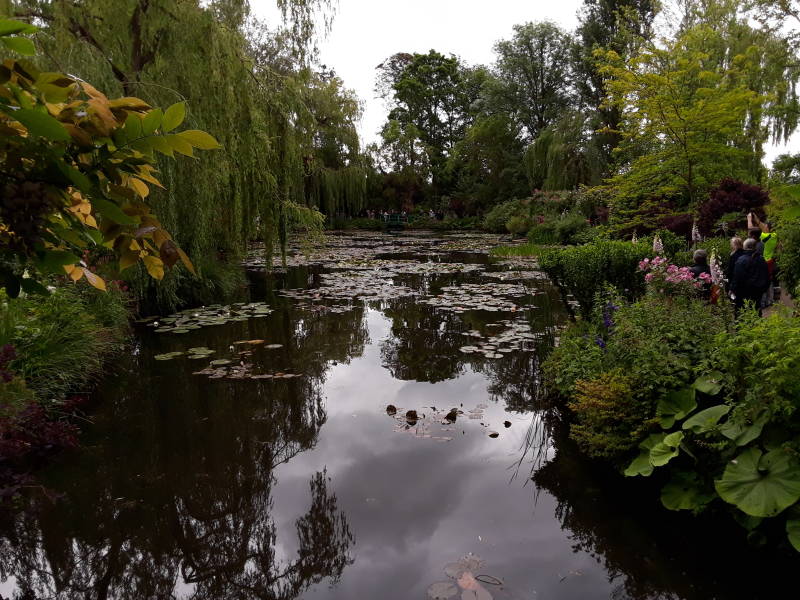 Monet famously spotted the property while traveling through here by train in 1883, moving in within the year. He rented it until 1890, when he had saved enough to purchase the house and garden.

In 1893 he bought the adjoining plot of land. The Ru, a stream that feeds into the Epte, itself a tributary of the Seine, ran through it. 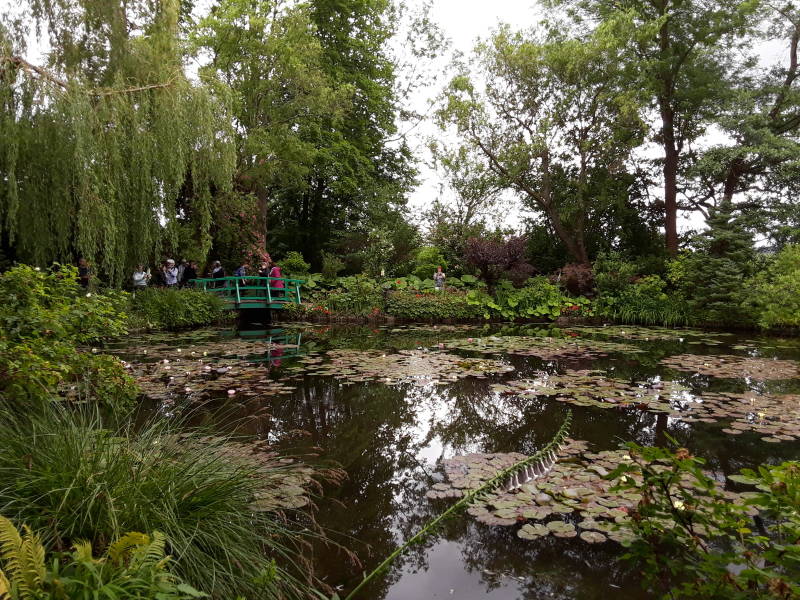 Monet did some hydraulic engineering to split and divert the stream and create a pond he surrounded with decorative plants and partially filled with water lilies. He had up to seven gardeners on staff, including one dedicated to maintaining the water lilies. 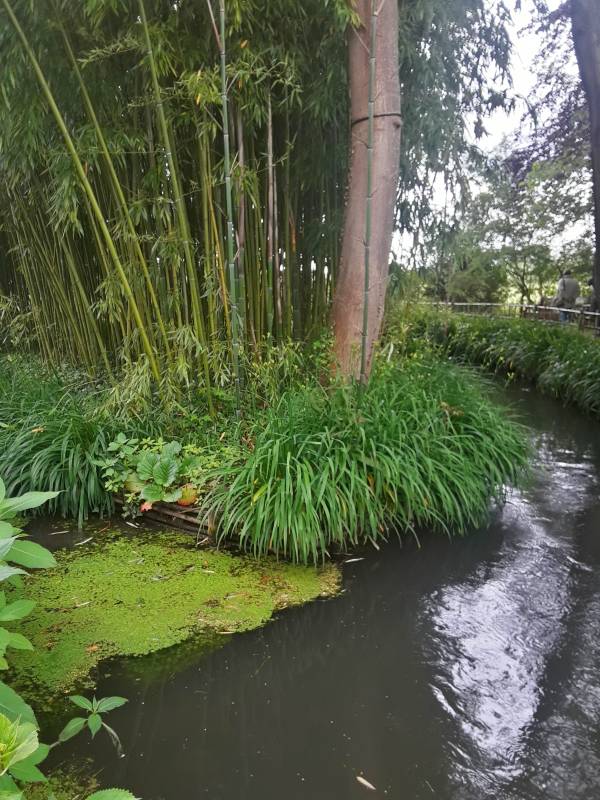 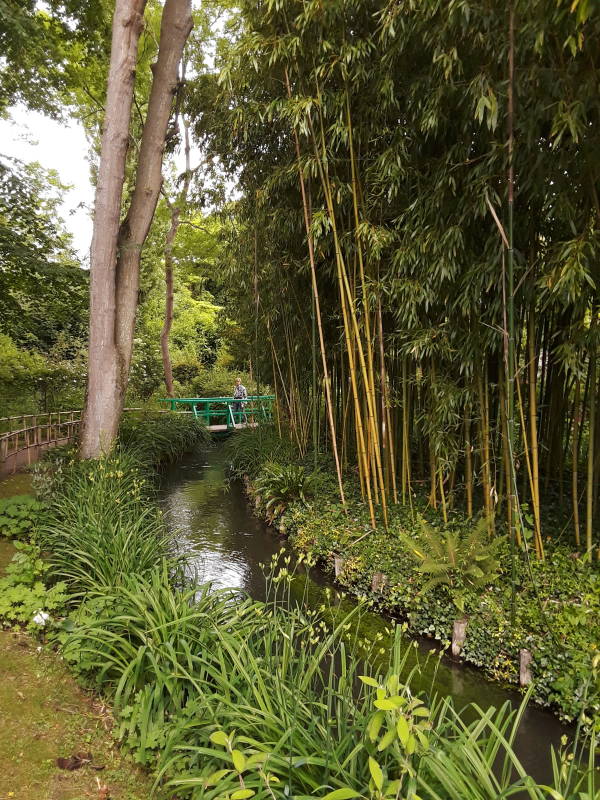 A treaty in 911 had established the Epte as the boundary between Normandy and Île-de-France. Yes, 911, back when the north coast of today's France was controlled by the Norsemen, starting to be called Normans. 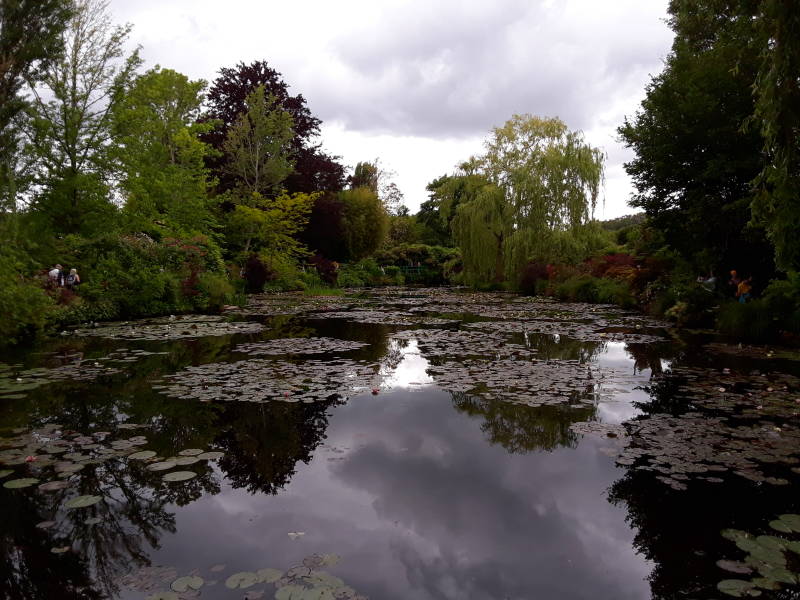 Below are two controls for water gates on the branching stream through the water garden. The second is almost invisible in the foliage. 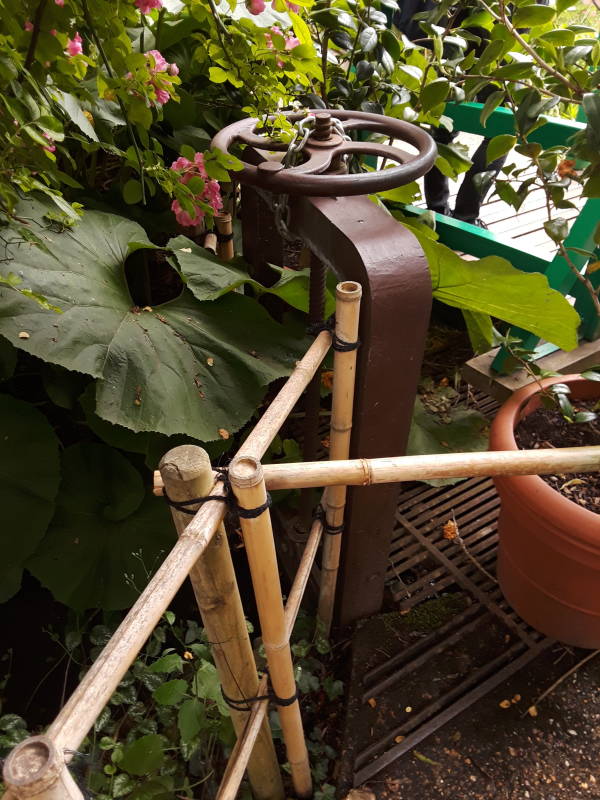 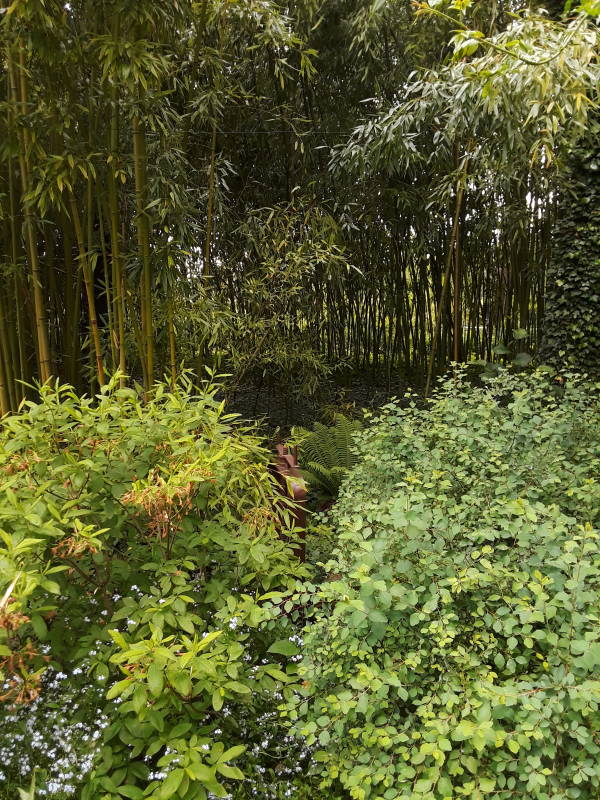 Claude Monet made the water garden reminiscent of scenes in the Japanese prints he collected. There were east Asian plants, including bamboo and flowers. Two green wooden bridges crossed connections between a stream branch and ponds. Finally, there was the very Japanese design, a beautiful garden with planned viewing points. 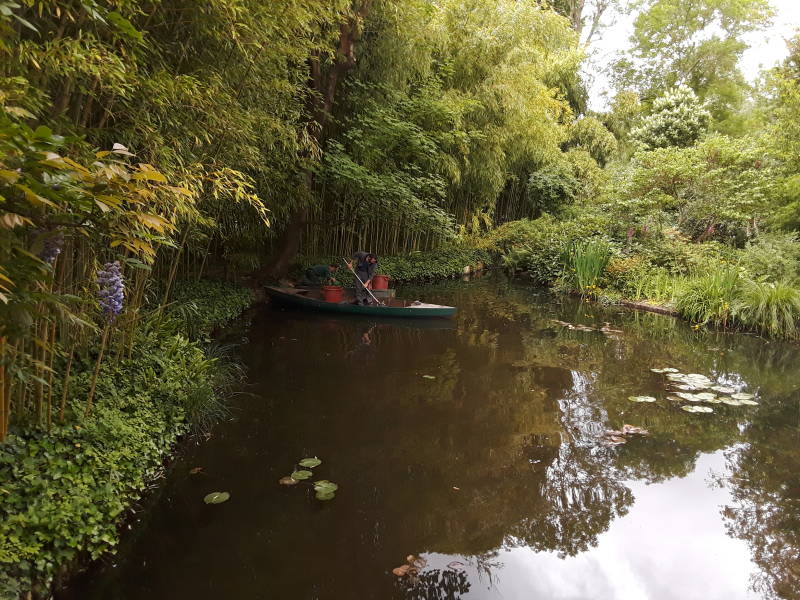 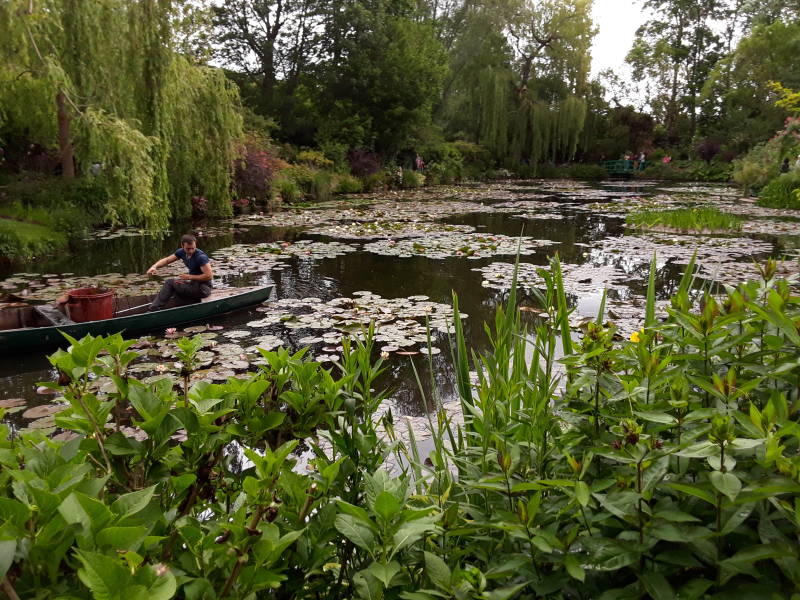