Do you know what to do with used toilet paper? If you start to say "Of course! You always put it in the...", then you are wrong! It varies from one country to the next, and sometimes it varies within a country. In some places you put it into the toilet and in other places it goes into a dedicated rubbish bin. Maybe you're anxiously looking this up on your smart phone while sitting on a toilet. If so, look around you and see if there's a small rubbish container within arm's reach, probably lined with a plastic bag. If so, put your paper there. If there's no rubbish bin in sight, or if you're in the U.S., Canada, or Northwestern Europe, drop it in the toilet and hope for the best. For more details, keep reading!

Of course, if you have wet-wipes or something else that does not dissolve like toilet paper, put it in the trash, not down the toilet!

So you have already answered the question Wipe or wash? Toilet paper or water? You decided on toilet paper. Go ahead, that's your personal choice.

That's a very personal choice. Keep it to yourself, I do not care to hear about it.

If you selected paper, you now have one last but very important question to answer:

Where do I put my used toilet paper?

If you are in a train with an old style toilet that simply dumps onto the track, just throw it down there and litter the countryside. That seems wrong, but good luck finding anywhere else to put it! And this is why they tell you not to use the toilet while the train is in the station.

Here you see a toilet on board a Bulgarian train running from София (Sofia) to Варна (Varna) by way of Горна Оряховица (Gorna Oryahovitsa).

Notice that you can look down the short waste pipe and out the bottom of the car to the tracks rushing past.

There is probably a small waste bin in this train toilet compartment, but they expect you to simply send the paper the way of the rest of the waste, down onto the tracks. 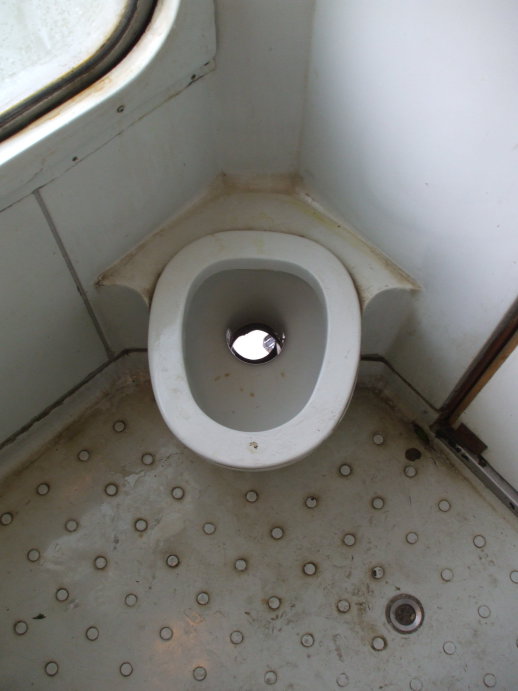 Toilet on board a Bulgarian train from София (Sofia) to Горна Оряховица (Gorna Oryahovitsa). Bombs away!

The Train Toilet page has more on the topic of simply dumping waste down a short pipe onto the tracks versus storing it in a tank.

But what if I'm not on a train? Where does the used toilet paper go?

Toilet paper should not be put into most squat toilets, as they are usually plumbed into systems not intended to handle paper. Squat toilets are common in countries in which water is the preferred personal cleaning method.

The plumbing systems in the former Soviet Union and a few southeastern European countries also were not designed to handle paper. There should be a small waste bin next to the toilet, place used paper in there. If there is no waste bin, then use your tissue paper sparingly, put it in the toilet, and flush it vigorously. Then deny all knowledge of the event. 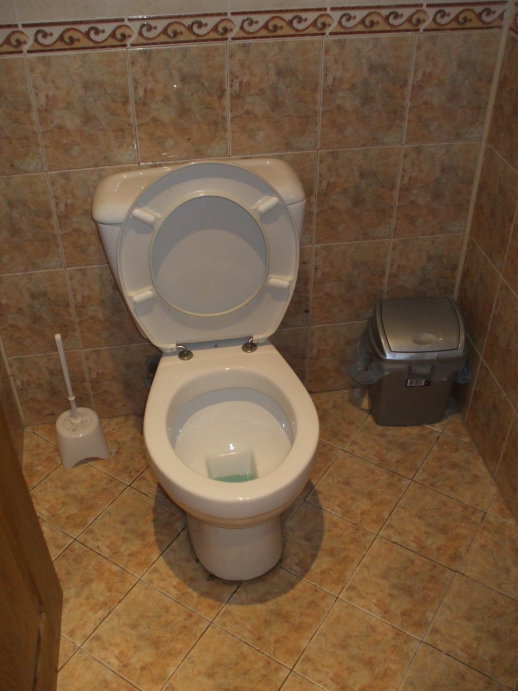 Toilet and waste bin at Hostel Mostel in Велико Търново (Veliko Târnovo), Bulgaria. Nice and modern and very clean, but use that waste bin!

The bowl-bin dividing line, the "Paper Curtain" if you will, divides the former Soviet Union plus a few of its client states from the west.

Paper goes into the bin, not the bowl, in Bulgaria, Greece, and anywhere continuing east and south across the former USSR, all of Asia, and the Middle East, and continuing south through Egypt and undoubtedly beyond there through most of Africa.

If You're a Paranoid "Prepper" or "Survivalist"

Let's assume you can spare a little time from your preparations for taking on the U.S. military with your personal arsenal. Use your entrenching tool and bury your cache of expensive soothing wipes with the military-sounding name and packaging.

No one wants to struggle to live in an apocalyptic wasteland without "Tactical Wipes".

Centralized municipal waste treatment operates in multiple stages. It will start with a pretreatment stage removing material that can easily be removed — tree branches and leaves, floating trash, dead animals, and so on. Clumps of very sturdy paper might be removed from the waste stream in the pretreatment. OK, who's cleaning themselves with the printer / copier paper?

The primary state of treatment sends the sewage into large tanks known as settling basing or primary sedimentation tanks. Grease and oil float to the surface and are skimmed off, while sludge settles to the bottom. Mechanically driven scrapers drive the settled sludge into a hopper in the base of the tank, where it is then pumped to a sludge treatment stage.

Sludge can be treated with bacterial digestion. Anaerobic digestion, carried out in the absense of oxygen, generates biogas with a high proportion of methane. This methane can be burned to heat the sludge, speeding up the digestion process, or used to fuel engines or turbines for other processing plant processes.

Aerobic digestion works much faster, producing carbon dioxide and imposing much higher operating costs due to the energy required to continuously aerate the sludge to provide the needed oxygen.

Private septic tank systems use anaerobic bacterial digestion. Solids that cannot be digested by bacteria build up in the tank, and eventually the settled undigestable solids must be pumped out.

The bacteria digest the material in the settled sludge, leaving a relatively clear liquid to flow out into the leach field to be absorbed into the soil. Most of the sludge should be digested, but some undigestable solids will slowly build up and require pumping from time to time.

Periodic applications of bacterial culture maintains a healthy ecosystem in your septic tank. Well, "healthy" from the viewpoint of the bacteria digesting your waste, anyway.