Who dumped a whole truckload of fizzies into the swim meet?
Who delivered the medical school cadavers to the alumni dinner?
Every Halloween, the trees are filled with underwear,
Every spring, the toilets explode.
— Faber College's Dean Wormer, Animal House

The first of these is room 304 in the Recitation Building at Purdue University. We're looking across the north end of the Memorial Mall, past Stanley Coulter Hall, the Chemistry building, and Heavilon Hall. The mysterious Secret Staff Toilet is in the School of Electrical and Computer Engineering, Purdue University, West Lafayette, Indiana, USA. It's room ECE 126, directly across from one entry to the large lecture hall in ECE 129. The building key (coded "EBSMA") which opens all the exterior doors also admits you to its retro and very plain interior. Just like the nuclear reactor in the basement, the Secret Staff Restroom does not appear on the building maps.

Meanwhile, Purdue has some of the worst urinals in the world. These are in the Potter engineering building: You see these things and you wonder what they are. Low sinks? High slanting seatless toilets? No, these are actually urinals combining the worst of several possible features: Purdue's Hicks Undergraduate Research Library is similarly plagued. The design is slightly different, but they still maximize splash-back. These are made slightly less bad by the panels, which means you only splash yourself, not your neighbors. Now for something more conventional. This mid-20th-century design with a black hard rubber horseshoe seat is in Purdue's Physics building. Here is a general-purpose public restroom in Heavilon Hall at Purdue University. There is a pair of restrooms labeled "Men" and "Women" on each floor of the building, except in the basement where building infrastructure got in the way of one of the two. So there's a single restroom with a locking door.

Once you get inside, it's pretty bland. Two sinks, a urinal, a handicap-accessible toilet, and a fold-down baby-changing table.

The only thing at all unusual or interesting is that the janitor's storage closet is through a door that you access through the toilet stall, making this one of the few toilet stalls with two doors.

Here is another unisex restroom at Purdue University, room 017 of the Electrical Engineering building. It's one large tiled room with no dividers, like the klizma chamber in the Russian hospital. 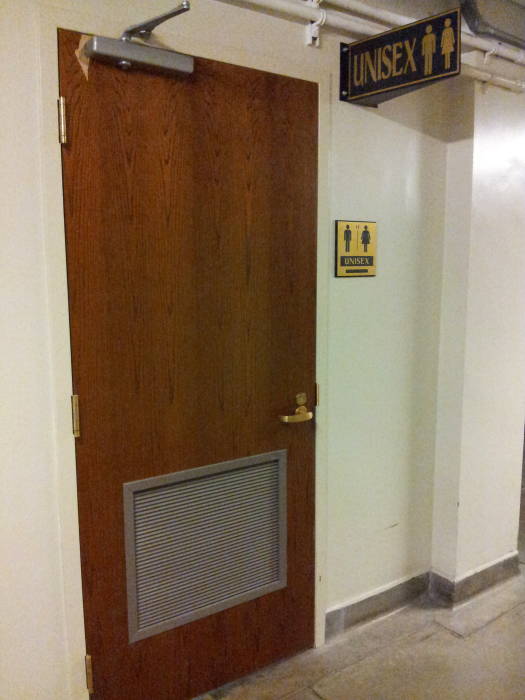 Now to class things up a little: This is the restroom at the President's Box at Purdue's Ross-Ade stadium. It's really the only way to watch a game. The classic dish there is the biscuits and gravy. Below is the notorious Full Order.

This is the mens room at the west end of the Infinite Hallway. It's room 7-107 in the Rogers Building at the Massachusetts Institute of Technology, Cambridge, Massachusetts, USA. This is one mens room in the Peabody Museum of Anthropology and Ethnology, Harvard University, Cambridge, Massachusetts, USA. This fairly high-tech urinal is in the park adjacent to the campus of the University of Cambridge. The hand-washing water flushes it, and there is a (nearly hidden) hot-air hand drier also built in.

It's not handicap-accessible, so this was not Steven Hawking's. He was on the faculty there, in the position once held by Isaac Newton. This urinal and condom machine are in Magdalene College, Oxford University, Oxford, U.K.

The Ancient Greek Medical School and its Plumbing

One of the main things to see on the Greek island of Kos, the main attraction in my opinion, is the Asclepion. This is an ancient medical school and clinic associated with Hippocrates, Galen, and others. We're at an upper level looking out over the site with Kos town in the distance, then the strait and Bodrum, Turkey, beyond that. Much closer, beneath the trees to the left, is where the latrines were located. To the right are the large baths of the later Roman era, with many remaining pipes and drains. The Western Excavation Site in Kos town has ruins from Hellenistic times into Roman times. Here are remains of a public toilet.