Most toilets are for people, but there are some public systems designed for non-human users. Some systems are as simple as dispensers with plastic bags provided by the city. However, some airports now provide fairly sophisticated toilet areas for "companion animals".

Let's look at some animal toilets!

The "Dog Pot" system of dispensing bags has become quite common in the U.S. Below is a version of it along a street in Atlanta, Georgia.

This was one of the first such systems that I saw, around 2005. It had a sign above, further explanation on the bag dispenser, and the waste can directly below.

This simple system has caught on in many U.S. cities, as more and more cities pass ordnances requiring owners to clean up after their pets. Now you see these dispensers in many cities, often in an even simpler form with just the dispenser box and the waste can nearby.

The term "Dog Pot" is probably driven by the same sort of soft taboo as with human toilets, which we insist on calling "bathrooms" and "restrooms" even for public ones where we don't bathe or rest.

Even if you plan to squat down and pick up another creature's feces, you don't want to see signs openly describing what you're about to do.

It seems like a good idea. Now if Atlanta would only do something about the huge amount of human urine sprayed everywhere in that city. It's a pungent feature in a city in a hot climate.

The first picture here is of the Dog Pot system in Atlanta in 2005: 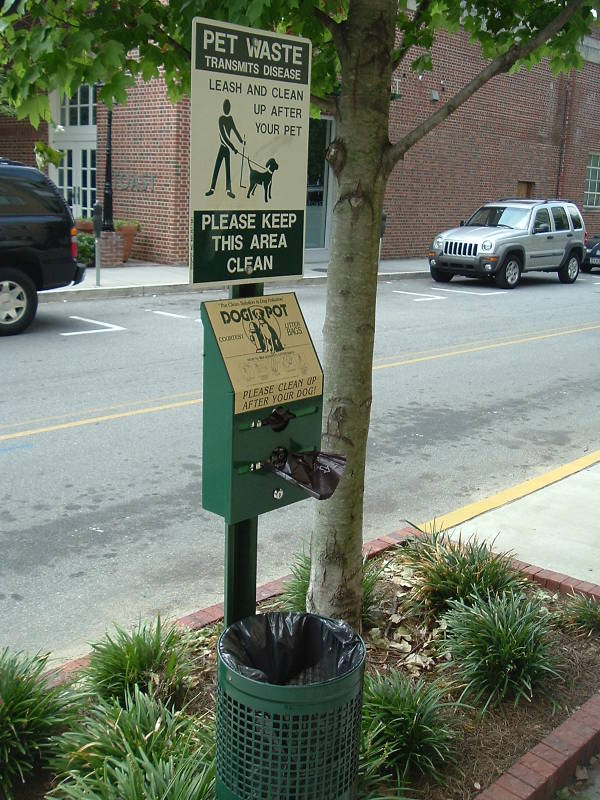 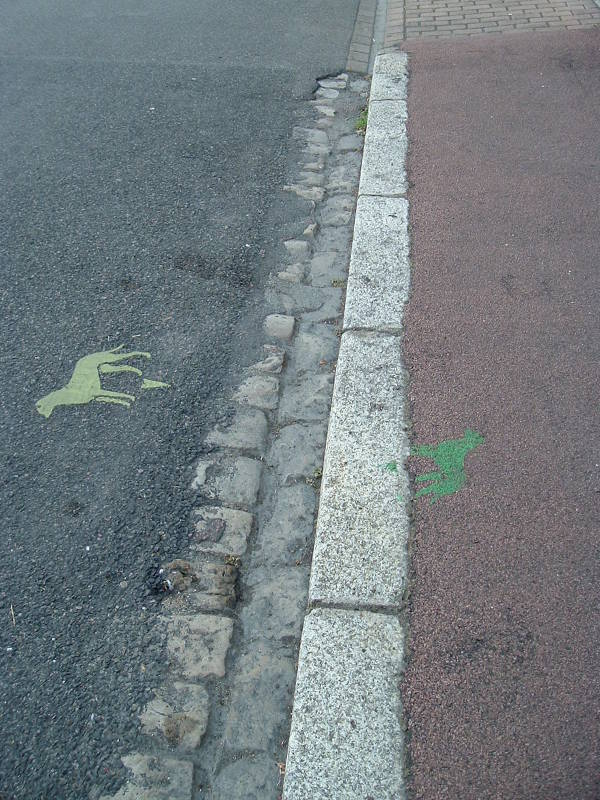 The second picture above shows the simple but effective system used in France to direct people to "curb their dog".

That's "curb" not as in "try to keep them from going, thereby guaranteeing that they'll do it right where everyone will step", but as in "direct them to the gutter, next to the curb, where no one steps and it will be washed away."

Again, Atlanta could use this system. For the humans.

This specific picture is from Saumur, along the lower Loire River, but you see this system many places in France.

The Detroit Metropolitan Wayne County Airport (or DTW/KDTW) has a "relief area" for pets and service animals in the main concourse.

The sign says, with an unfortunate "for while" wording error:

Delta Air Lines and Wayne County Airport Authority provide this area for the convenience of our customers with Service Animals and Pets. To use this area, you must agree to clean up after use.

Please follow these guidelines for while using this area: 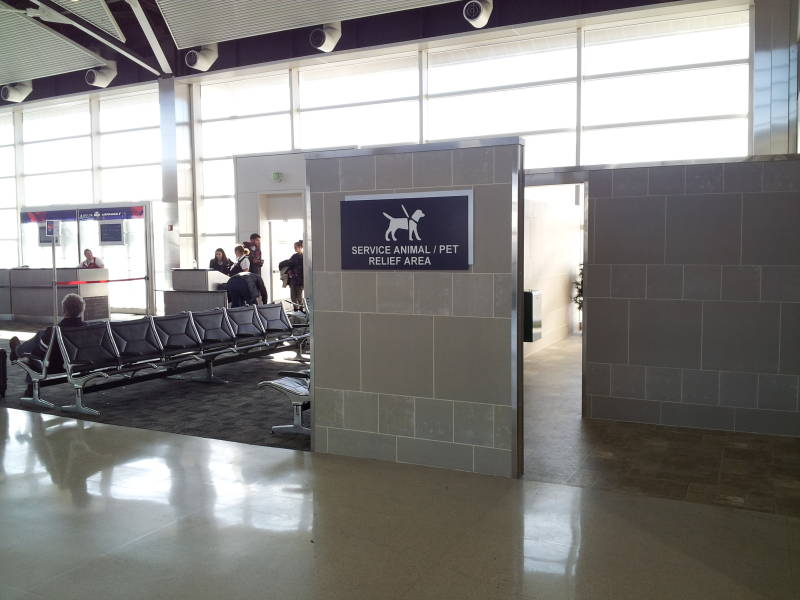 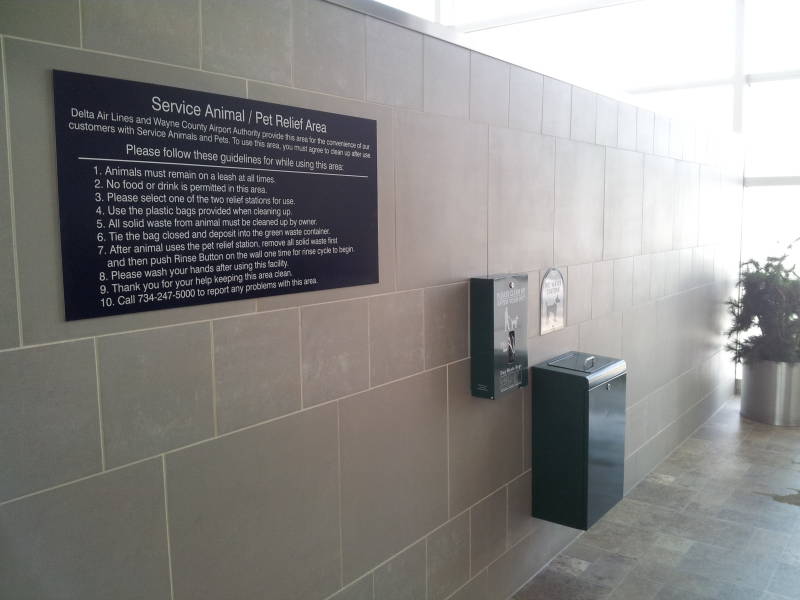 Here is one of the two "relief stations". Notice the tiny plastic fire hydrant and the two sprinkler heads. 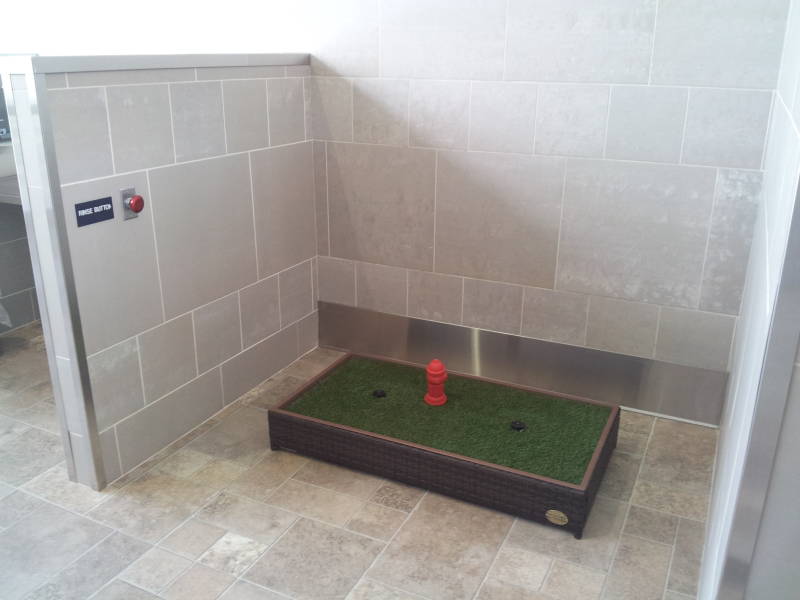 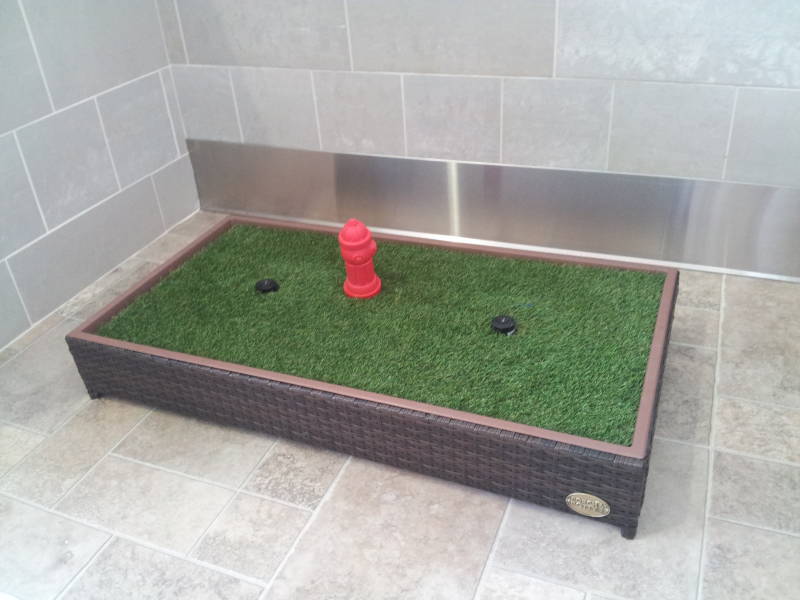 Press the rinse button once you have removed any solid waste. 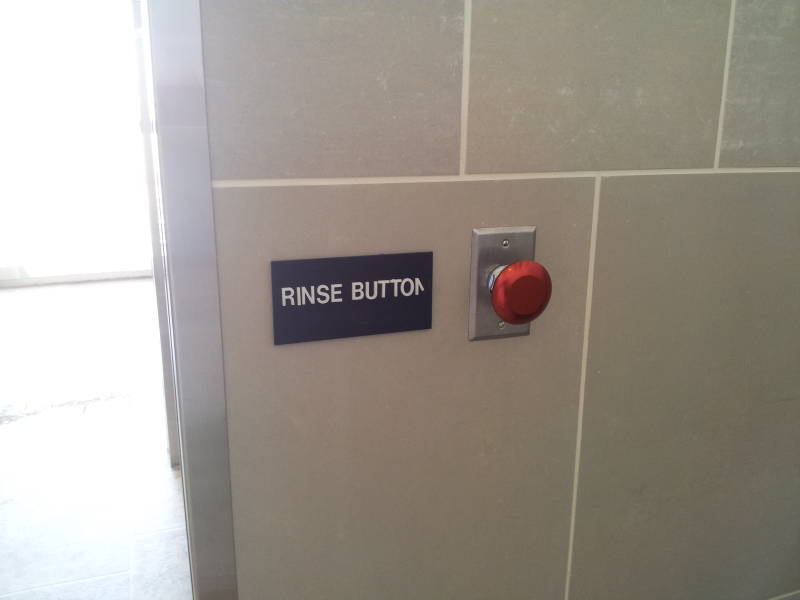 Or perhaps you or your dog prefer the second relief station, with the more lifelike grass and the view? 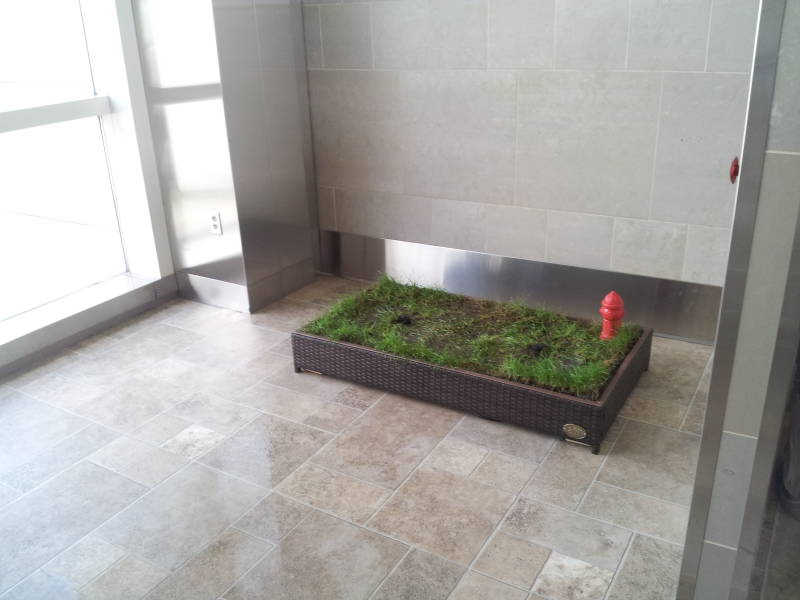 Either way, clean the human's hands when you're done! 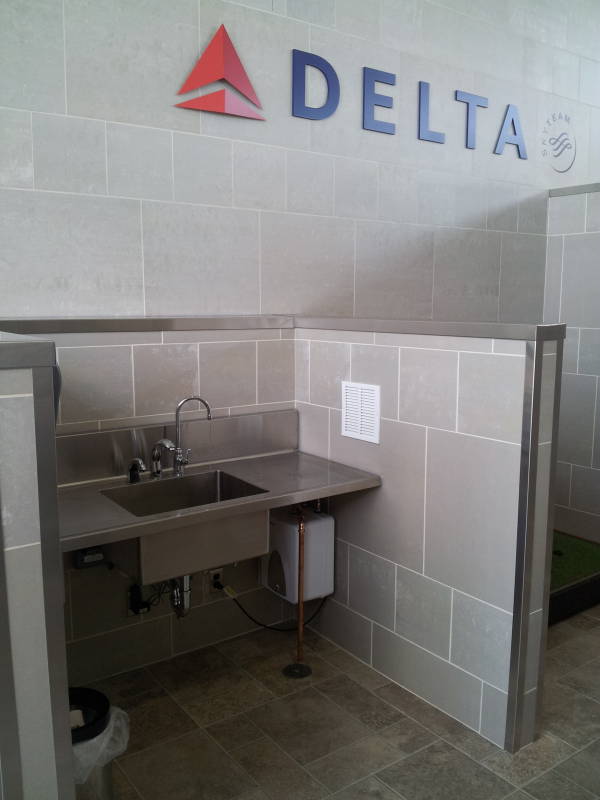 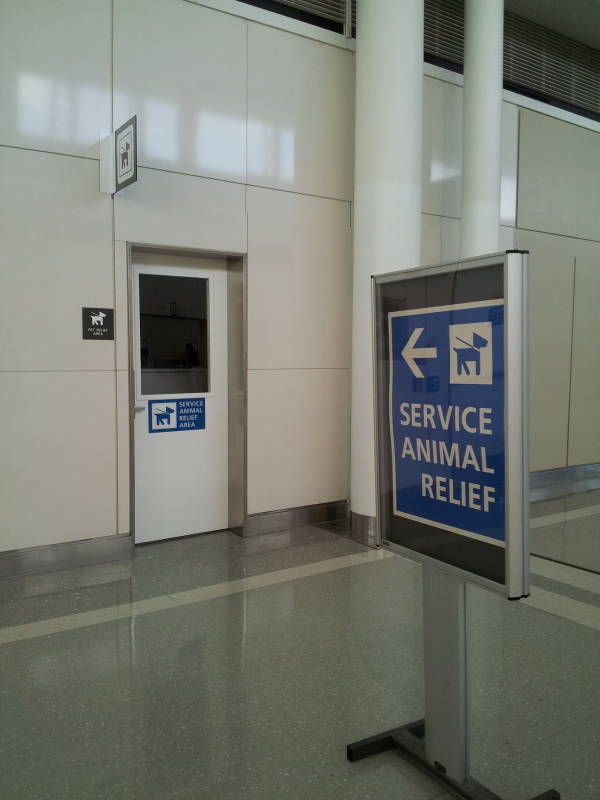 The last picture above is from Washington Dulles International Airport (IAD/KIAD), which added a service animal relief area soon after the Detroit airport's.

Below is one of the pet relief areas from John F Kennedy International Airport (JFK/KJFK) in New York.

The pet relief area in the Detroit airport is the result of repurposing an existing open area. Those at Dulles and JFK seem to be the new model, an enclosed door with a locking room. 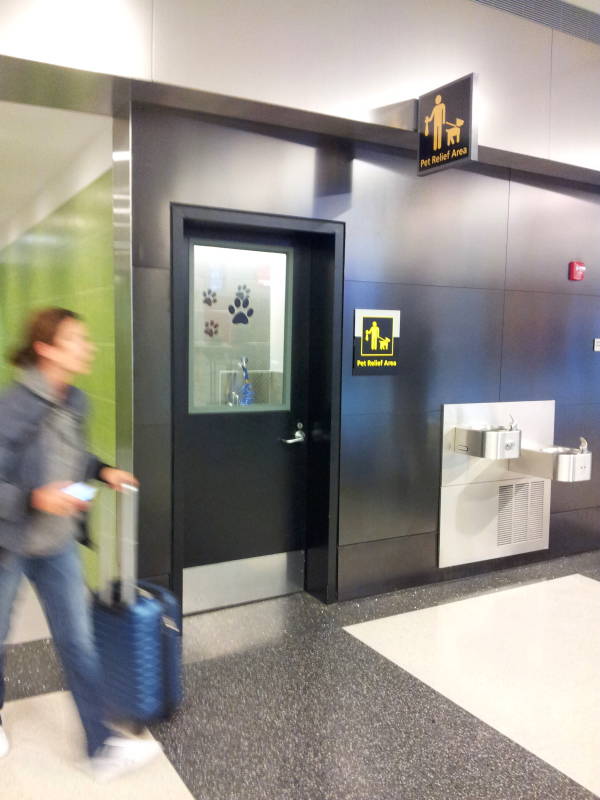 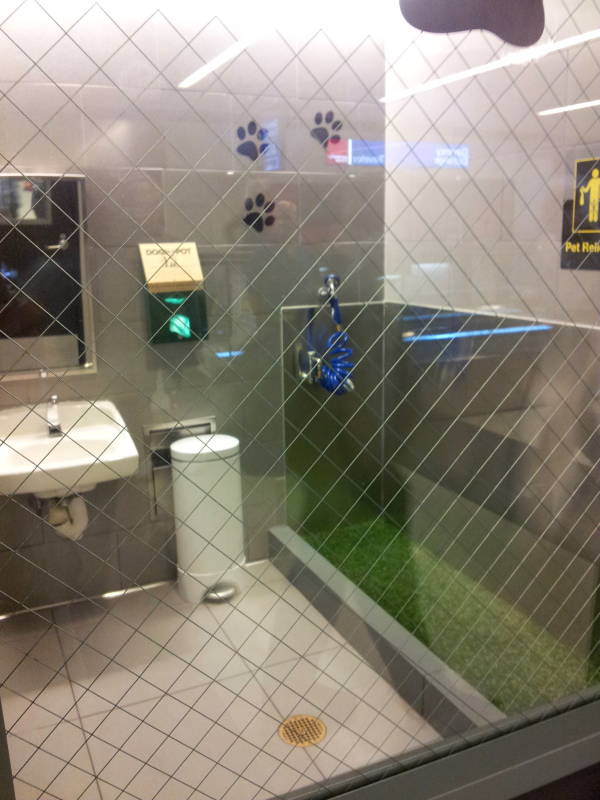