Liquid nitrogen, commonly referred to simply as LN2, is a compact and easily transported source of very dry nitrogen. Handled carefully, it is a much safer source of extremely cold and dry air than pressurized gas. Large containers called Dewar flasks can keep it cold and liquid for days to weeks at a time. Sometimes you see these dewars filled with liquid nitrogen sitting on sidewalks in major cities. They are used to keep telecommunications conduits dry. 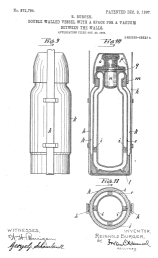 A Dewar, named for the Scottish physicist and chemist James Dewar, who invented it in 1892, is a large vacuum flask used to store liquid nitrogen for periods of days to a few weeks. A big one for scientific and industrial applications is often called a Dewar, while a small one for your coffee is often called a Thermos, the brand name. Generally speaking they're all vacuum flasks.

A vacuum between the inner and outer walls minimizes heat transfer. A small fraction of the liquid nitrogen boils off, holding the body of the liquid at 77 K. Nitrogen expands by a factor of 1:694 going from the liquid to the gaseous phase, so the dewer must be unstoppered or, more likely, stoppered with a pressure relief value.

Dewars of liquid nitrogen can solve problems associated with running telecommunication cables in moist environments. In other words, LN2 can keep your wires (and fibers, and fiber repeaters) dry.

New York's Financial District is at the very southern tip of the island of Manhattan, in the narrow twisting streets of old Nieuw-Amsterdam. There are huge numbers of telecommunications lines running through a small area just a few meters above the water line, where the East River and the Hudson River join in New York Harbor.

So, in New York it is pretty common to see Dewars of liquid nitrogen sitting along the street. They're often chained to a streetlight pole. A small red rubber hose is duct-taped to the ground and disappears into a manhole cover. 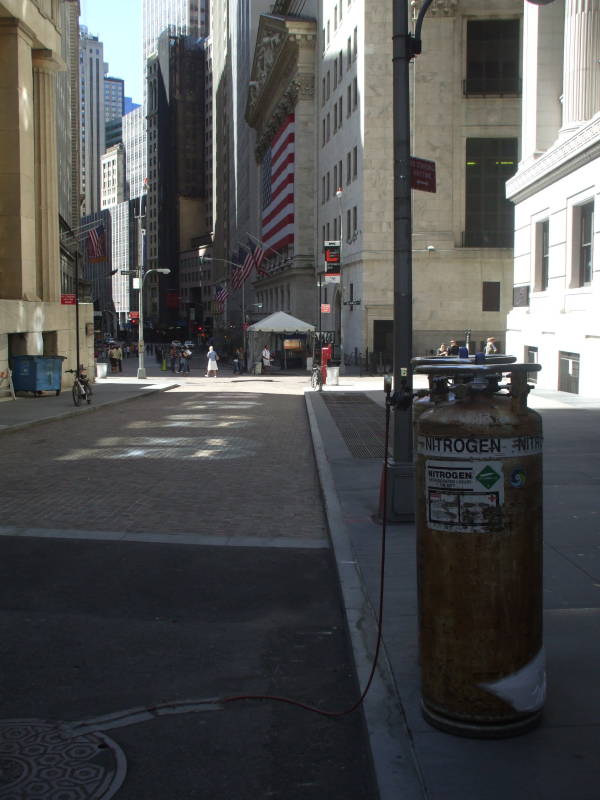 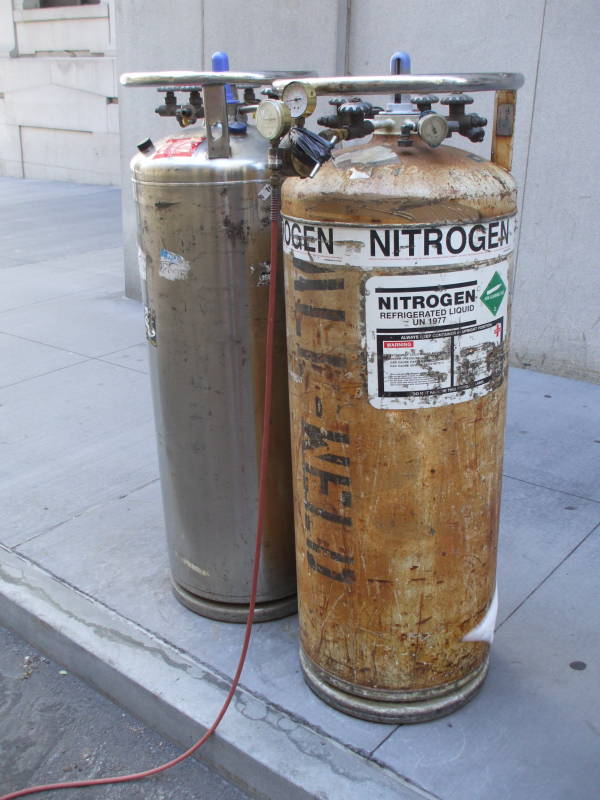 Here you see two Dewar vacuum flasks of liquid nitrogen along Nassau Street, leading toward the New York Stock Exchange, at which point its name changes to Broad Street. The NYSE is on the corner of Broad and Wall Streets, fronting on Broad. That's its columned front with the large American flag in the background.

There is a guard post just across the street, so these Dewars have 24/7 protection and aren't chained to anything.

These Dewar vacuum flasks of liquid nitrogen are on the sidewalk along Broadway where it crosses John Street.

You can see the frost built up on the top plumbing in the close up view. 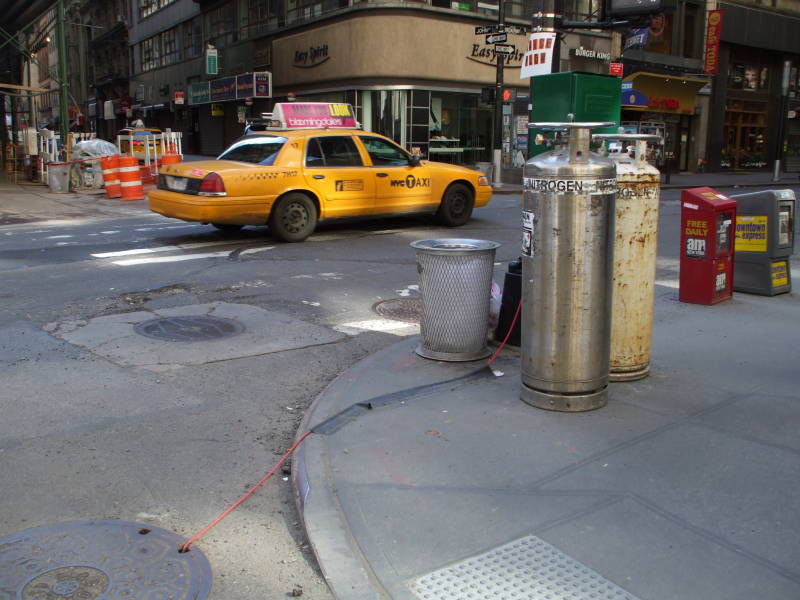 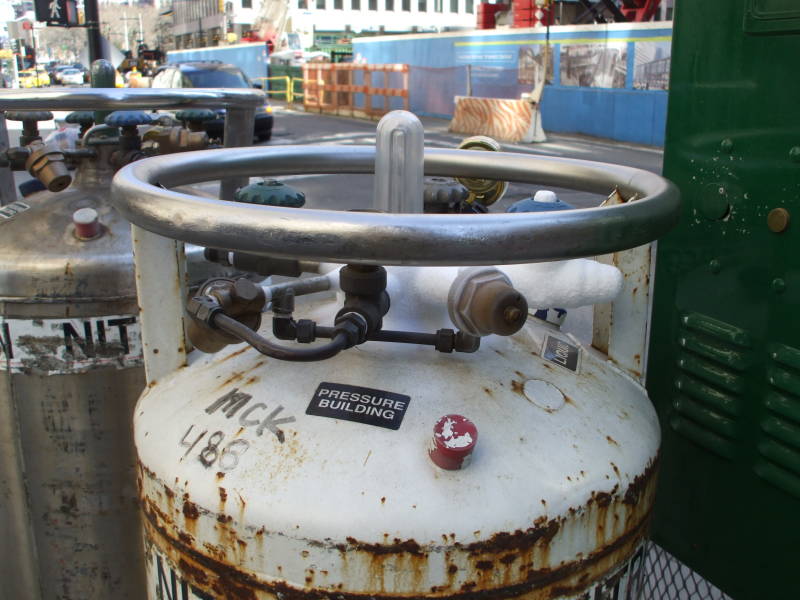 60 Hudson Street is the former Western Union Building and was its headquarters until 1973. It is still a major world communications nexus.

It's a carrier hotel with over 100 telecommunications companies interchanging Internet traffic. Another major carrier hotel in Lower Manhattan is at 60 Broad Street, just off Wall Street. 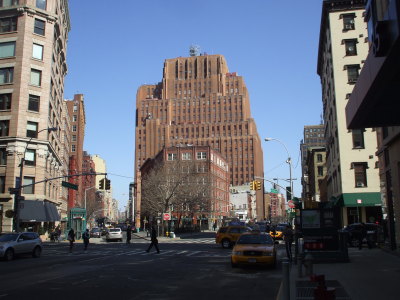 Also, Tuckerton NJ and the surrounding area include the landing sites for a number of cables to Europe, the Caribbean, and South America.

Lots of telecommunications lines in a damp underground.

There are more LN2 flasks in Midtown and further uptown. Here's a pair on Fifth Avenue at East 35th Street, one block north of the Empire State Building. 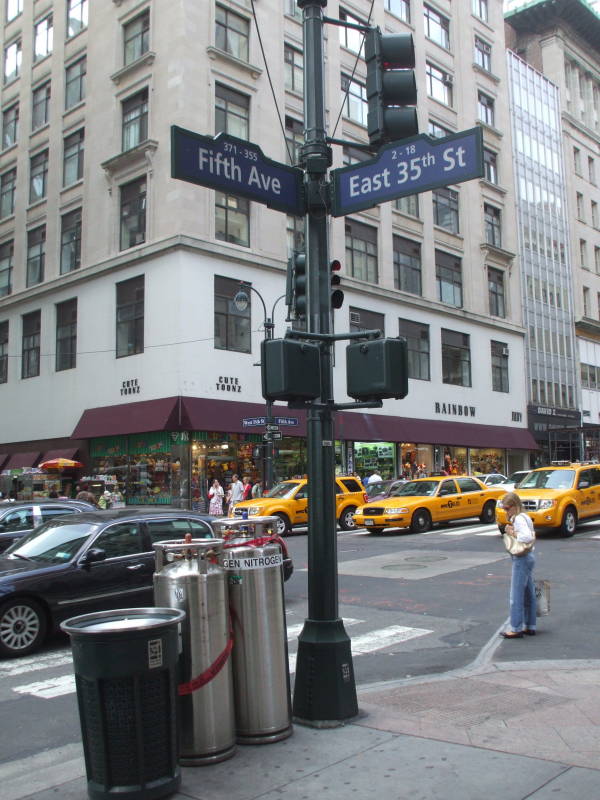 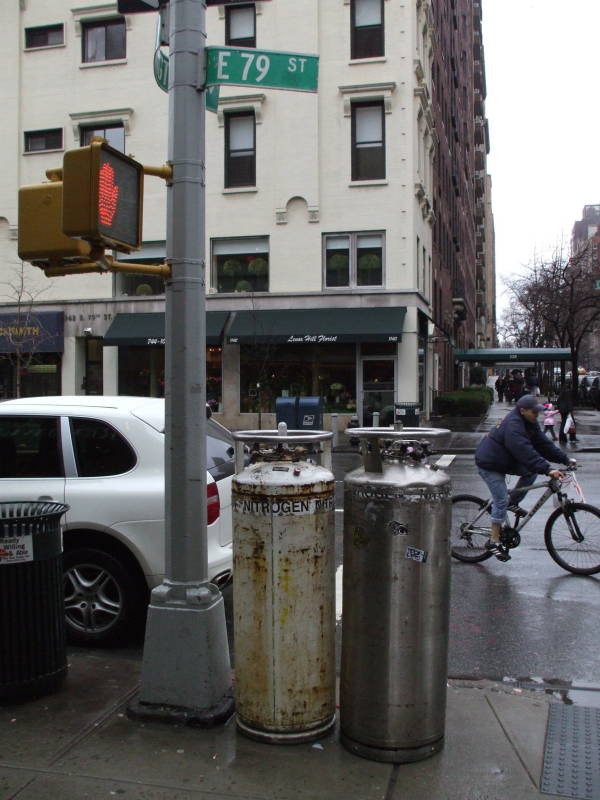 And a pair on the Upper East Side, at Lexington Avenue and East 79th Street.