When you're visiting Pompeii on a day trip out of Napoli, you can get a multi-site ticket good for visits to three ancient sites within a three-day period.

Pompeii is, of course, the most obvious, and Herculaneum is the second place people tend to visit, as it's a smaller and more affluent town, better preserved in some ways due to being buried by a lahar or volcanic mudflow, rather than having been buried directly in hot ash and pumice.

A third site, also easily accessible via the Circumvesuviana train, is listed on the ticket as Oplonti. It's really the Villa Poppaea, an opulent Roman villa owned by the Emperor Nero in the Roman town of Oplontis.

Take the Circumvesuviana train to the modern town of Torre Annunziata, Exit the station and follow the signs to Scavi, Italian for Ruins.

The first block takes you to a busy road. Once you're across that, it's just another two or three blocks to the site. 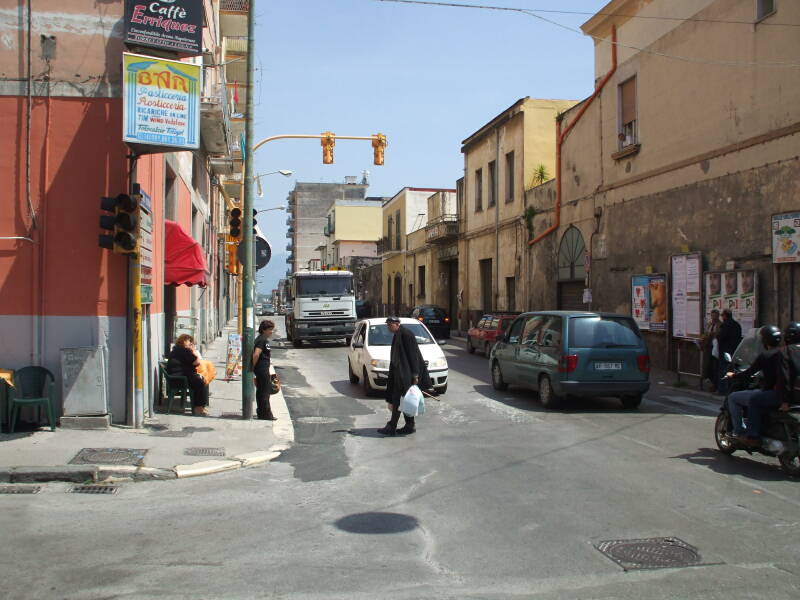 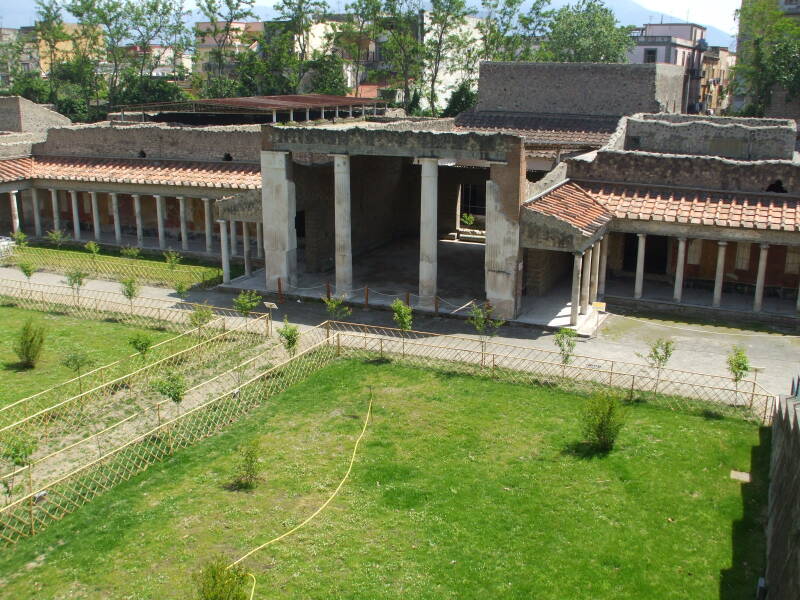 As you can see here, the villa was fully buried under 10 meters or more of ash when Pompeii erupted in August, 79 AD.

The villa's site was rediscovered during brief excavations in the 18th century, but the complete site, including a 60 by 15 meter swimming pool, was not fully excavated until the 1970s. 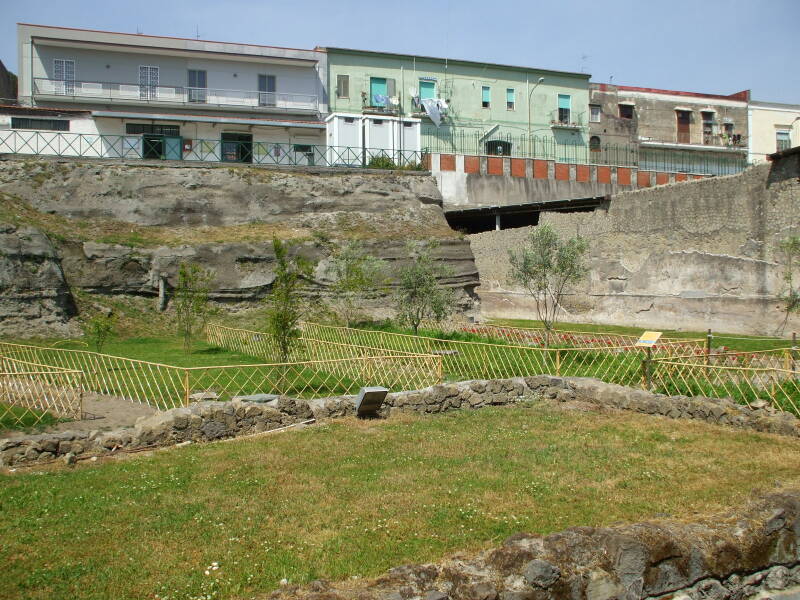 The grounds of Villa Poppaea, showing the 10 meters or more of ash.

He was just 30 years old and had ruled for less than 14 years, but he had accomplished quite a bit. Struggling to find some positive side to Nero (this is like "Hitler liked dogs"), he put restrictions on the amounts of bails and fines, and limited lawyers' fees. 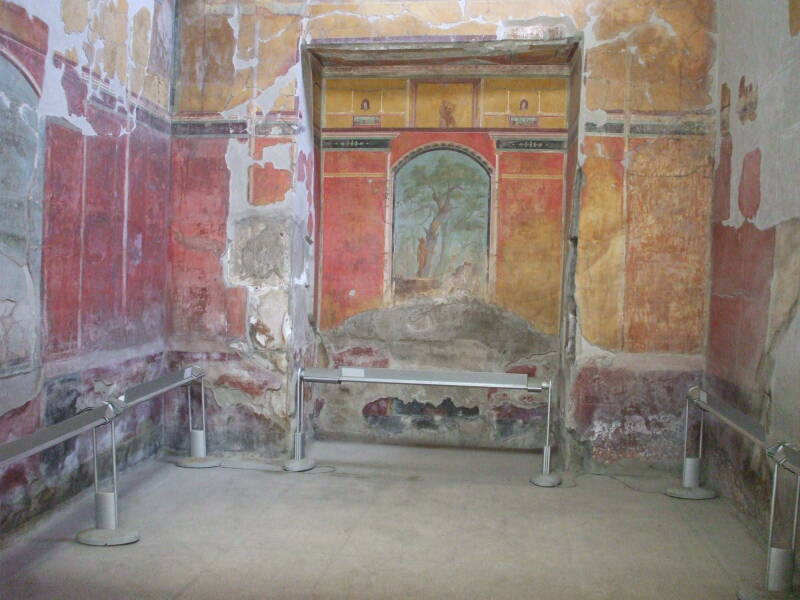 He negotiated a peace treaty with Parthia after a series of wars, and dealt with uprisings by the Druids and Boudica in Britannia. He tried to build a canal at Corinth, a project that wasn't finished until 1893. He was liked by many of the people, especially the lower class and those living safely far away in the Eastern Empire.

On the negative side there was his rise to power, where his mother Agrippina poisoned the reigning Emperor Claudius according to ancient historians (54 AD); the murder of his mother (59 AD), adoptive brother, and others; the Great Fire of Rome (64 AD) and the following persecution of Christians; the destruction of the Second Temple in Jerusalem (70 AD); and lots of other sociopathic behavior.

In 53, Nero married his stepsister Claudia Octavia. Then, in 58, Nero began an affair with Poppaea Sabina, the wife of his friend (and future Emperor) Otho. He then ordered the murder of his mother in 59 because it did not seem politically feasible to divorce his stepsister and marry his friend's wife while his mother was alive.

Meanwhile, Nero owned this villa in Oplontis. After he married Poppaea Sabina in 59, she used this as her main residence when she was not in Rome. At least until Nero killed her, anyway.

The frescoes are outstanding examples of the high point of the form and color of Roman work, including perspective and trompe-l'oeil effects that would not be equalled in Italy until the beginnings of the Renaissance in the 15th century.

A severe earthquake in 62 damaged the villa, it was still under repair when it was buried by the eruption of Vesuvius in 79.

No one was living there at the time, as Nero had killed Poppaea by kicking her in the abdomen during late pregnancy.

The latrine is fairly large, there would have been room for several seats around the U-shaped space. 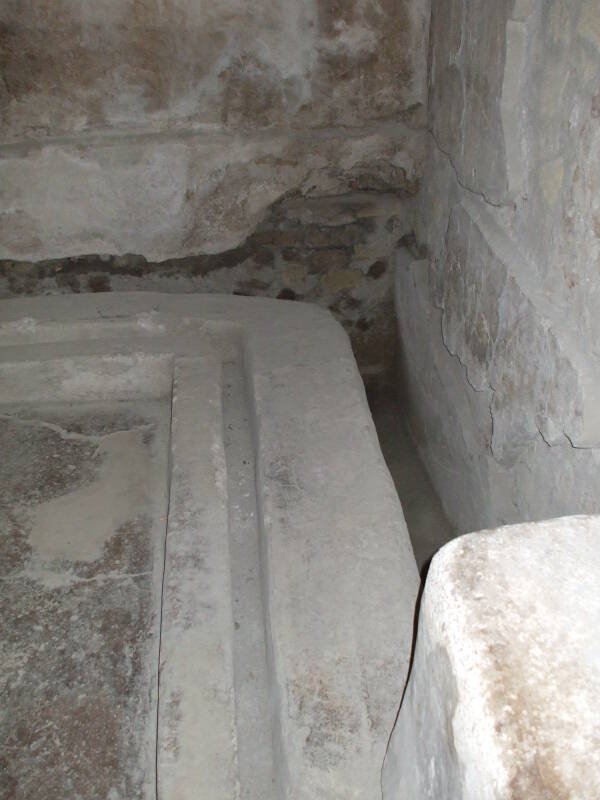 It's the classic Greco-Roman design as seen at Ephesus and elsewhere — a fairly deep waste channel against a wall, a raised seating surface (apparently of wood or otherwise not surviving today), and a low water channel for washing flowing past the users' feet. 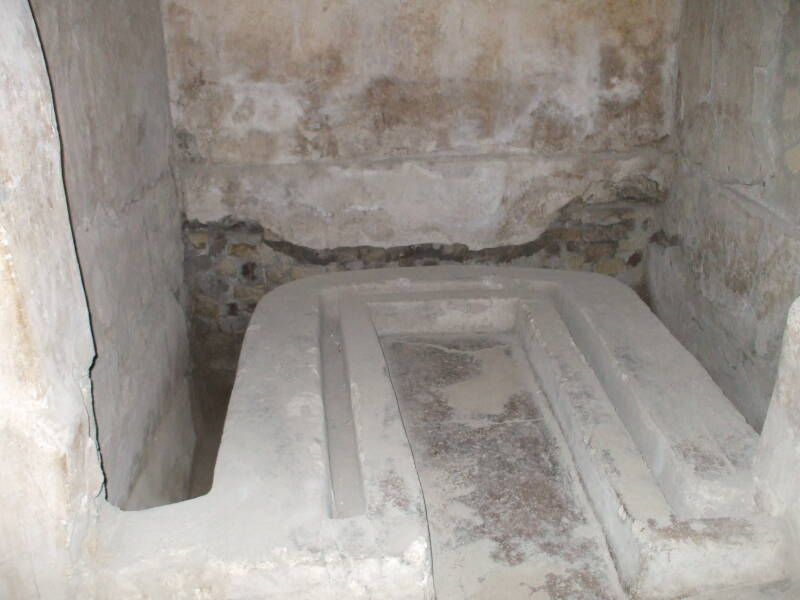 Europeans didn't have toilet paper until recently. The Romans, at least the higher classes and certainly Nero, used a tersorium, also called a xylospongium, a sponge mounted on a stick. The sponge could be dipped into a water channel running in front of the row of communal toilets in the latrine, and rinsed off in that channel after use. If there was no channel of running water, a bucket of salt water or vinegar water would be used, as Seneca described in his Letters of Lucillus [70,20].

A 2011 BBC story described how a team of archaeologists working at Herculaneum had discovered a 86-meter tunnel filled with "what is believed to be the largest deposit of human excrement ever found in the Roman world." It was removed in seven hundred and fifty sacks, and studied to determine the diet of the citizens of the time.

Click here for my page about visiting Napoli, known as Naples.