The Department of Environmental Protection supplies water to the city, and then collects and treats a combination of sewage waste and runoff from rain and snow. The wastewater is collected through a grid of 11,900 kilometers (or 7,400 miles) of sewer pipes. The system collects 4.9 million cubic meters (or 1.3 billion gallons) of liquid every day. 96 pump stations move the wastewater to 14 treatment plants.

New York has had a sewer system since the mid 1800s. The Croton Aqueduct opened in 1842. New Yorkers were using more water, but taking much less from wells and cisterns. This raised the water table and flooded cellars.

The Croton Aqueduct was a system, while the sewers were built piecemeal under ward leaders who retained control. For example, there was a sewer running along Canal Street in the 1830s. It was an open channel, sixteen feet wide and running down the center of the street. The 6th Street and 9th Street sewers were even wider, twenty feet, and so they moved even slower.

In 1845 the Common Council changed their policy and allowed a mix of animal, vegetable, and human waste to enter the city's sewer systems. The city started building sewers, starting in the tenement areas where cellar flooding was worse. This was in contrast to the fresh water supply, which was routed to the wealthier sections first.

It had been thought that "The innate immorality of the poor condemned them to a life of filth, degradation and disease." By around 1850 the city was questioning that philosophy.

By 1852 there were 148 miles of sewers. In 1854 a new city regulation stated that a household must connect if there is a sewer line available. By 1855 the sewers extended from the Battery at the southern tip of Manhattan uptown as far as 60th Street.

John Snow and
Epidemiology On the Mode of
Communication
of Cholera

John Snow had shown that septic waste leaking into water supplies led to cholera epidemics in London. The excreta of cholera victims was infectious, it wasn't the ill-defined "miasma" cited by medical authorities up to that point. The second edition of his book On the Mode of Communication of Cholera came out in 1855.

Snow's book was very influential. It is still cited in formal study of epidemiology. Meanwhile, in 1855 the Illinois state legislature hired Ellis Chesbrough of Boston to design and build a sewer system in Chicago. In 1857 the New York state legislature established the Brooklyn Board of Sewer Commissions and called for it "to devise and carry into effect a plan of drainage and sewerage for the whole city, upon a regular system, for the purpose of carrying off the water and filth proper to be carried off in sewers, for the health and convenience of the inhabitants." Brooklyn's engineers, Julius Adams and J. P. Kirkwood, divided Brooklyn into four divisions. The sewerage of each district was planned, financed, and built as an integrated system.

For more on the earlier decades of New York's sewer systems, see Building New York's Sewers: The Evolution of Mechanisms of Urban Development by Joanne Abel Goldman, published by the Purdue University Press.

The age of New York's system means that it is a combined sewer system in which rainwater and septic waste flow into the same system of pipes. This greatly increases the amount that must be handled during rainy weather. If you were building a new system you would very much prefer to have separate rainwater runoff and sewage lines. 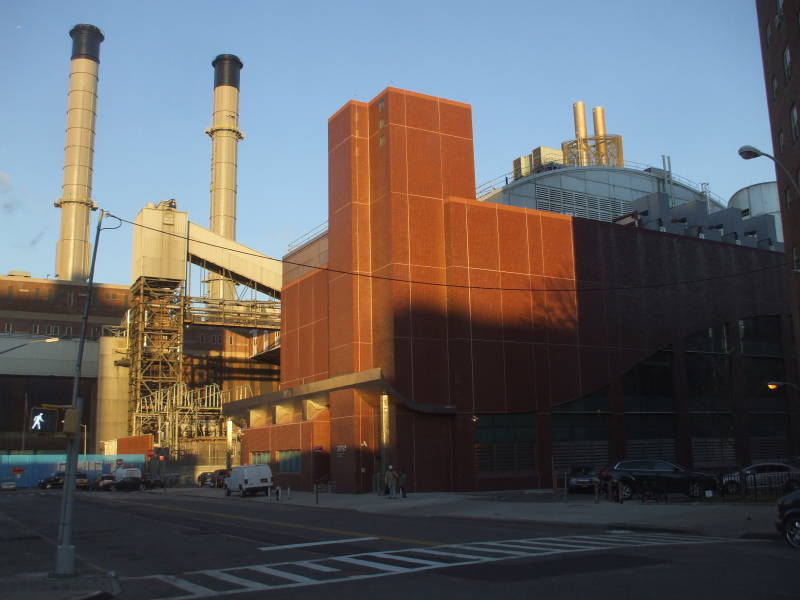 New York had to deal with an older system with a lot of liquid and semi-liquid waste. Starting in 1924, the city hauled sludge by barge and tugboat to a point 12 miles offshore in the Atlantic Ocean. That continued until 1986, when it was hauled further out, to a point 106 nautical miles out from Atlantic City. Ocean dumping was then banned in 1992.

Until the North River plant started its preliminary treatment in March 1986, the city of New York had always discharged raw sewage directly into the Hudson River. The extent is measured in the 1979 paper "Sewage contamination in the New York Bight: Coprostanol as an indicator".

Scientists have used coprostanol and other fecal steroids to discover sewer systems in the Agora of Athens from the late 500s CE, to track Hannibal's forces through the Alps by the remains of the elephant droppings, and to track the first human inhabitants of North America.

The liquid flowing through the pumping stations and pipes to the fourteen treatment plants contains a wide variety of material. Some is household waste, from toilets, baths, sinks, and washing machines. Restaurants and hotels contribute similar waste. Industrial and commercial facilities add even more. Finally, there is rainwater and other liquid runoff.

Screens on storm drains keep large objects out of the system. Once the waste arrives at the plant, further screens are used to remove bottles, cans, bags, tree limbs, mob hits, and other bulky objects.

The primary sedimentation stage puts the waste into large tanks or pools. Denser material settles into sludge at the bottom, while oil floats to the top. The idea is to let gravity do the work of separating impurities out of the water. The liquid moves slowly through a series of primary treatment basins, becoming cleaner along the way.

Oil and grease is skimmed off the surface. Sometimes air is blown into the bottom of the tank to carry oil to the surface as foam. Mechanical arms scrape along the bottom, moving sludge into hoppers for further treatment. 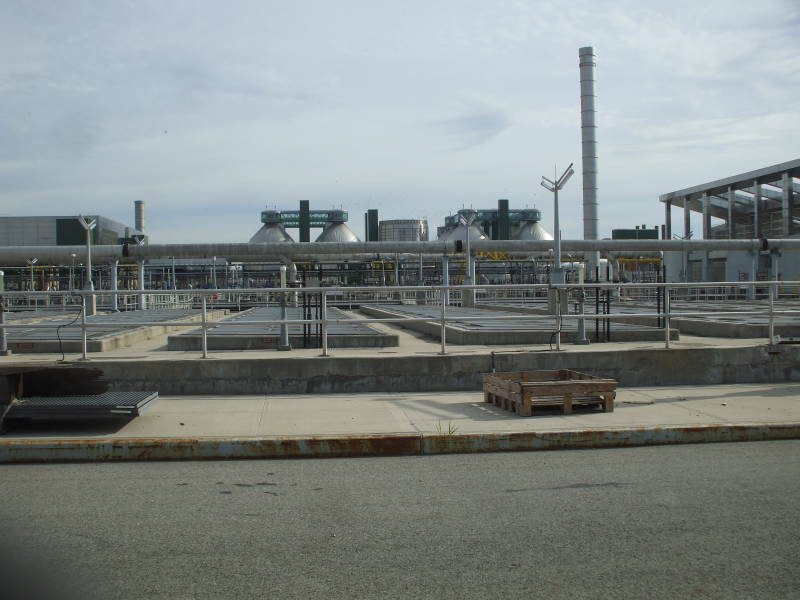 The secondary stage pits biology against biology. Aerobic or oxygen-using bacteria and protozoa consume and break down the soluble sugars, fats, and other short-chain carbon molecules. They bind larger and less soluble molecules into floc, which settles out of suspension into sediment.

Anaerobic digestion breaks down chemicals in the absence of oxygen. Different strains of microorganisms are used in heated digestion chambers. The amount of solid waste is further reduced, and useful methane is produced. 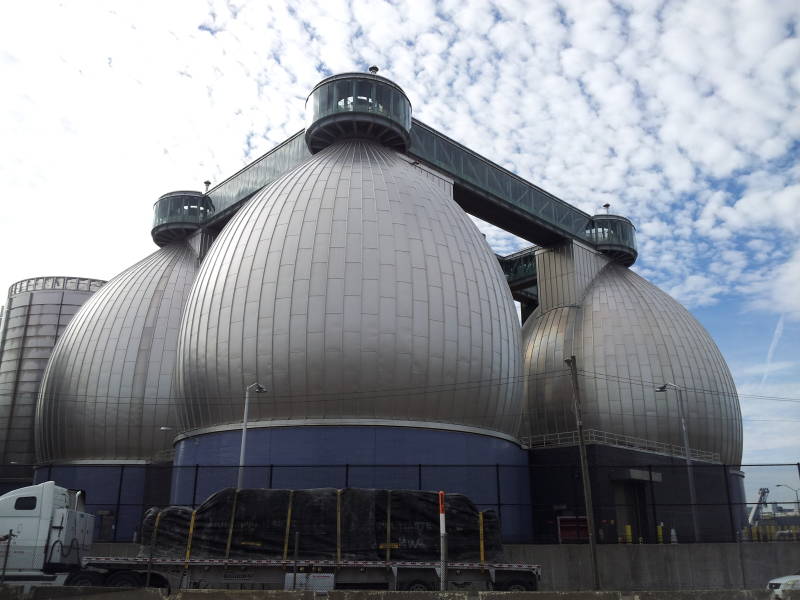 Various microorganisms oxidize ammonia (or NH3) in the wastewater into nitrite (or NO2-) and then to nitrate or NO3-. Others then reduce the nitrate to nitrogen gas (or N2), which diffuses into the atmosphere.

Phosphorus leads to troublesome blooms of algae where the plant's output is released. It comes from human urine and feces plus detergents. Specific bacteria collect phosphorus, to the point that it makes up 20% of their mass. The resulting biomass can be separated from the water, yielding a useful fertilizer.

The final stage of sludge treatment is dewatering, to convert the sludge to biosolids, a moist soil-like material that can be used as fertilizer or as a soil replacement. 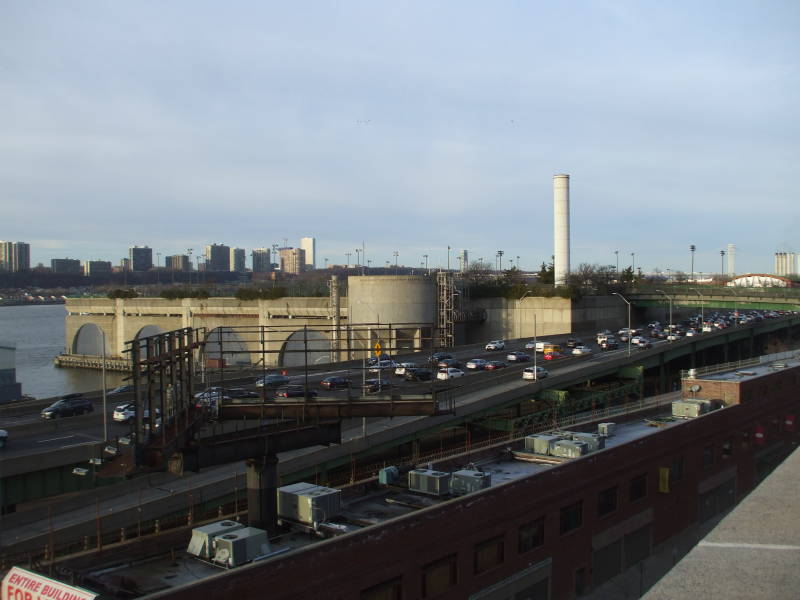 The North River Wastewater Treatment Plant disinfects its effluent with sodium hypochlorite before releasing it into the lower Hudson River.

The final stages of tertiary treatment for the remaining water can use either ultraviolet light or chemicals (typically ozone, chloramine, chlorine, or sodium hypochlorite) to reduce the population of microorganisms before the liquid is released into the environment.