Cholera is a deadly disease spread through poor sanitation. Several continental-scale pandemics struck in the 1800s, killings millions across Asia, Europe, and the Americas. Doctor John Snow discovered during the 1854 outbreak in London that the disease was being spread by a public water pump in the Soho area. His discovery was an early example of epidemiology. He disabled the pump and stopped the outbreak, but it took several years for medical science to catch up with Snow's insight. A pub named in his honor stands nearby today.

Cholera is a bacterial intestinal infection causing profuse watery diarrhea, vomiting, fever and abdominal pain. The severity of the diarrhea and vomiting can quickly lead to dehydration and electrolyte imbalance. Infection is usually through drinking water contaminated by the watery diarrhea, colloquially called "rice-water stool".

Cholera is a major cause of death world-wide, outside developed countries with advanced water treatment and sanitation. The last major outbreak in the United States was in 1910-1911.

The first cholera pandemic was in 1816-1826. The disease began spreading in Bengal, in the Indian subcontinent. By 1820 it had spread across India, killing 10,000 British troops and many times that number of Indians. The outbreak spread as far as China, Indonesia, and the Caspian Sea basin. An estimated 15 million people died in India between 1817 and 1860, and another 23 million between 1865 and 1917.

There was a second major outbreak in Paris and London in 1849. London's outbreak killed 14,137. It also spread to other British cities, and by ships to North America. Several thousand died in the U.S., including former U.S. President James Polk. Over 150,000 Americans and 200,000 Mexicans died during the pandemics between 1832 and 1849. 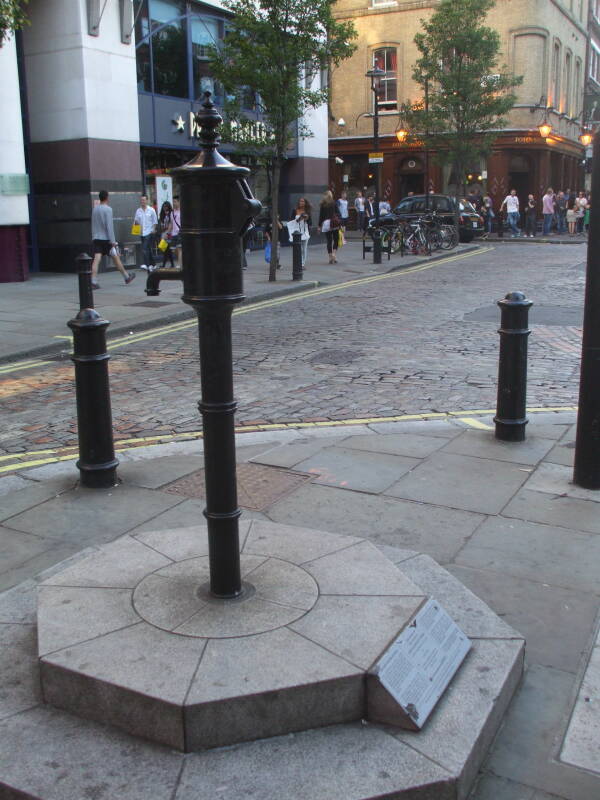 The replica Broad Street Pump in Soho, with the John Snow pub in the background.

The Ghost Map by Steven Johnson describes the history of cholera, Snow, and his analysis.

The 1854 outbreak in London was centered on the Soho area. Doctor John Snow analyzed the available information and determined that the main agent spreading cholera was a public water pump on Broad Street. The spring below the pump had been contaminated by sewage. Snow didn't know what the contaminant was, but he found that the common attribute of victims was the use of water from that pump. Snow's analysis was one of the first examples of epidemiology. Despite objections, he convinced the government officials to remove the pump's handle.

This change stopped that outbreak, but it took many more years before there was wide belief in contaminated water as the cause. "Miasma" or "bad air" was the preferred explanation. The government officials replaced the handle on the contaminated pump after the pandemic had subsided.

Accepting Snow's explanation required accepting the fecal-to-oral transmission of disease, which they thought was too unpleasant for the public (although they seemed to think that the public could handle cholera itself just fine).

The above picture shows a replica pump unveiled in 1992. Things have changed quite a bit in Soho since the 1850s. The pump was at the intersection of Broad Street and Cambridge Street — now renamed Broadwick Street and Lexington Street, respectively. It was close to the rear wall of today's John Snow pub, named in honor of the pioneering epidemiologist.

You can see the John Snow pub beyond the replica de-handled pump in the picture above. Here and below are some pictures from inside on a quiet mid-week night. 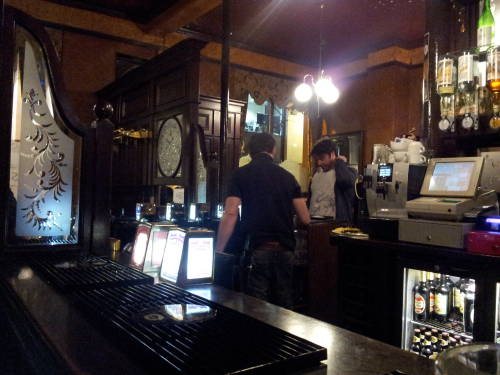 Interior of the John Snow Pub.

The John Snow is a Samuel Smith's pub, meaning that it only sells beer from that one brewery. It is kegged beer, dispensed through taps, and not hand-pumped from basement casks. You can see those illuminated taps along the bar but not long pump handles.

So purists would say that it's not a "real beer pub". But it's a popular place in the neighborhood with low prices, a friendly atmosphere, some wonderful old architecture, and it's a nice place for a pint. 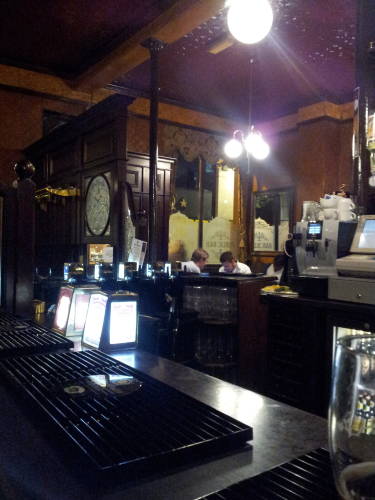 There is a very low pass-through door between the left and right halves of the pub. 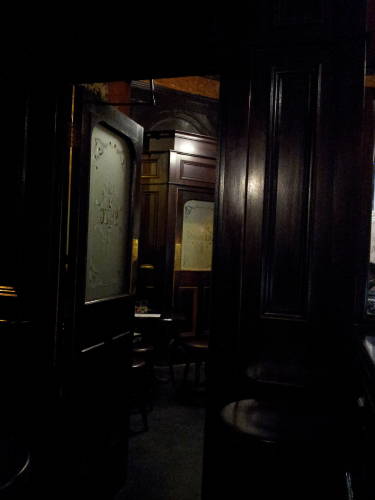 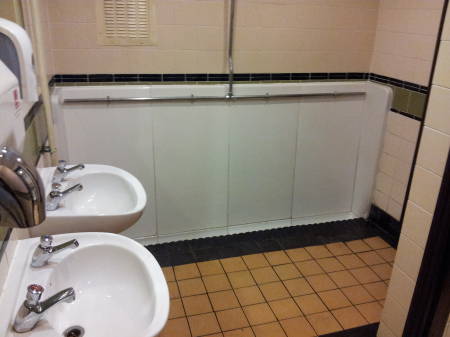 Sinks and large urinal in the Gents' room.

Snow used statistics and careful mapping of cholera cases to show that the Southwark and Vauxhall Waterworks Company was delivering sewage-contaminated water from the Thames river to homes, leading to an increase in the number of cholera cases. Many families tried to have their raw sewage collected and dumped into the Thames to keep they cesspit from filling faster than their septic waste could decompose and be absorbed into the soil. He then showed that there was a cluster of cholera cases around this pump.

Later research showed that this public well had been dug only three feet from an old cesspit which was leaking fecal bateria. The soiled diapers of a baby who had contracted cholera from another source, possibly the contaminated water delivered by the Southwark and Vauxhall Waterworks Company, had ended up in this cesspit. That cesspit was originally under a house, which had been rebuilt in a different location after a fire. The city widened the street and lost track of the cesspit, and later the well was sunk just an arm's reach away. 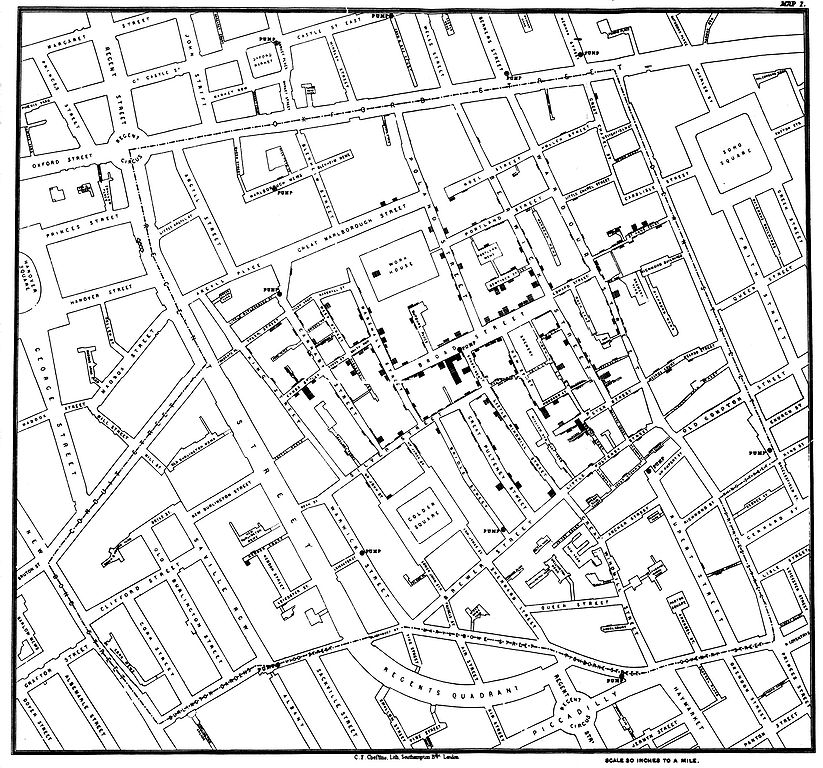 Doctor John Snow's cholera map, by which he traced the origin of the 1854 Soho cholera outbreak to the pump.

On proceeding to the spot, I found that nearly all the deaths had taken place within a short distance of the [Broad Street] pump. There were only ten deaths in houses situated decidedly nearer to another street-pump. In five of these cases the families of the deceased persons informed me that they always sent to the pump in Broad Street, as they preferred the water to that of the pumps which were nearer. In three other cases, the deceased were children who went to school near the pump in Broad Street...

With regard to the deaths occurring in the locality belonging to the pump, there were 61 instances in which I was informed that the deceased persons used to drink the pump water from Broad Street, either constantly or occasionally...

The result of the inquiry, then, is, that there has been no particular outbreak or prevalence of cholera in this part of London except among the persons who were in the habit of drinking the water of the above-mentioned pump well. I had an interview with the Board of Guardians of St James's parish, on the evening of the 7th inst [7 September], and represented the above circumstances to them. In consequence of what I said, the handle of the pump was removed on the following day.

These public health concerns have led to modern standards for hot water temperature, and thus to further worries about potential injuries. 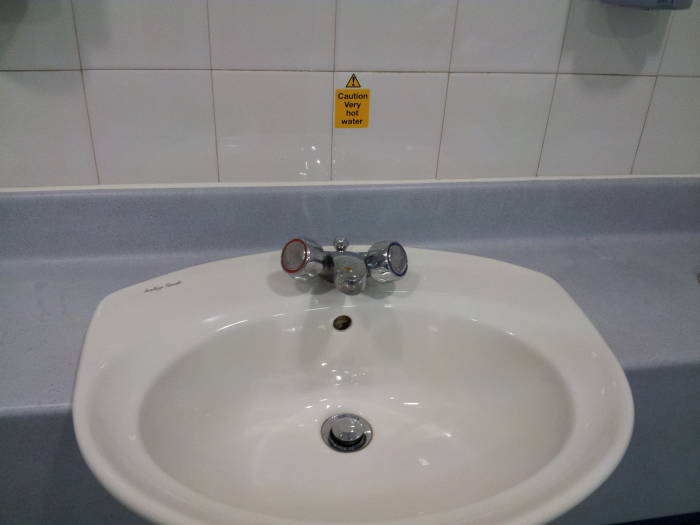 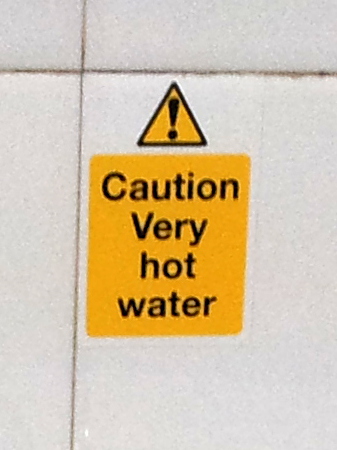 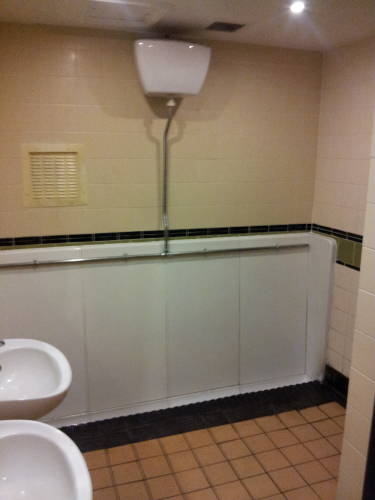 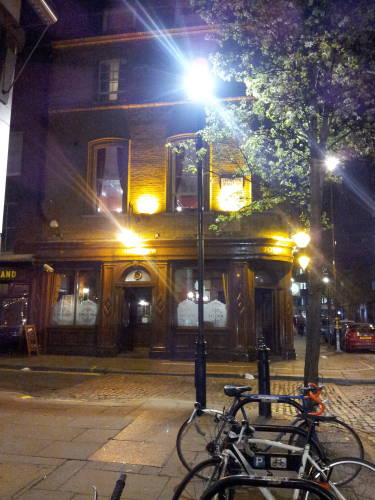 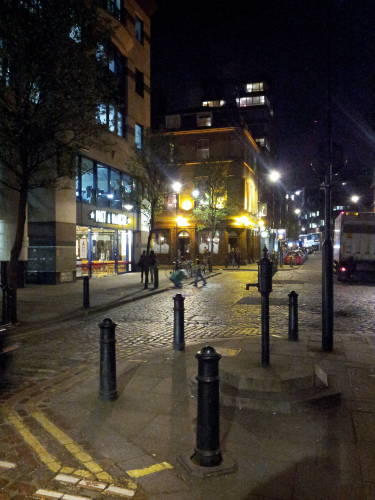