Install a Squat Toilet in Your Home

People ask me from time to time, "How can I install a squat toilet in my home?" These might be people who have recently moved to the U.S. Once in a while it's someone like a U.S. Air Force veteran who was stationed at Incirlik Air Force Base in Turkey and came to prefer squatting. Sometimes it's someone squatting for health reasons. You can purchase squat toilets in the U.S. The difficult part is getting them installed and, in some places, getting the installation approved through health or building safety inspections. A few alternatives or workarounds are available. Here is everything I have been able to find on the topic.

If you want to have a squat toilet in your home or office, there are three possible solutions:

There is good news for squat toilet enthusiasts: You can now buy squat toilets over the Internet! We truly live in an age of wonders!

Blue Earth Ceramics makes the BEC-116BO Natura 16" Natural Position Toilet (bowl only) or, for the whole kit, ready to install, squat, and flush, the MD-Plus Squat Toilet complete with Tank. Both are available through Amazon.

Blue Earth Ceramics also makes what they call an "EZ-retrofit box-installation", basically a raised box about 12" high that puts the squatter on a small raised platform maybe 24" wide by 36" deep.

If you can't install a proper squat toilet, as discussed below, you might try a stand-alone portable squat toilet. NaturesStep makes both a 30-inch model and a 24-inch model.

Somewhat surprisingly, some American plumbing manufacturers make squat toilets. You do not find them routinely carried in the stock of home improvement stores, of course, but you (or your plumber) can order them. 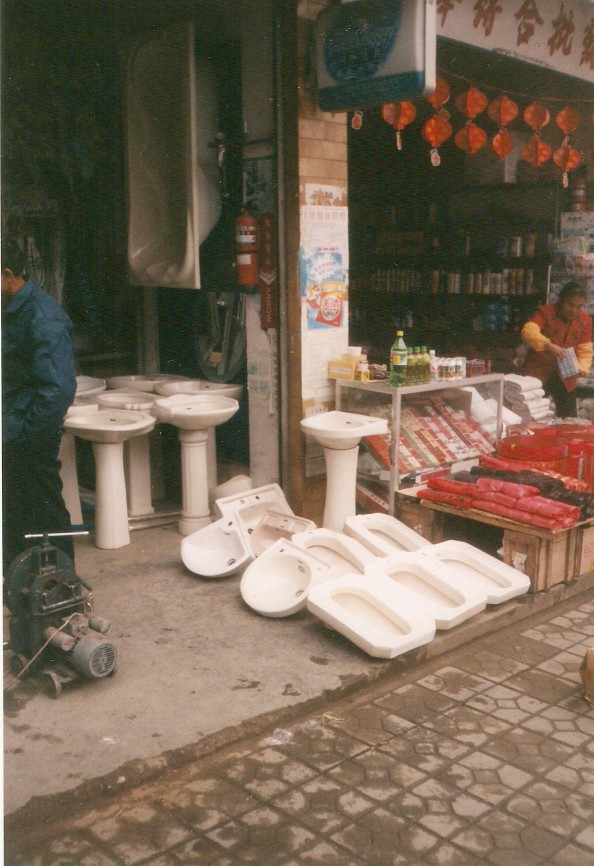 If you live in the right part of the world, you can simply go to the local store and buy a squat toilet. This plumbing shop in Yangshuo, Guangxi Province, China, carries a variety of squat toilets. Or you could ask this Turkish plumbing supply company.

In late 2013 Patriot Porcelain LLC announced plans to spend almost $15 million to purchase, renovate and equip a 330,000 square-foot (100,584 square meters) facility at the former Kokomo Sanitary Pottery Plant in Kokomo, Indiana. They would then move their overseas lavatory and toilet manufacturing operations to Indiana. It appears that Patriot Porcelain manufactures vitreous china products for American Standard, Sanitec, and Kohler who then sell them under their corporate names.

Also remember that squat toilets are sometimes called "eastern style", "international" or "Indian pans". You can ask Google to help you find these with some simple searches for "indian pans" toilet or for eastern style toilet.

If you ask Yahoo or Google to search for "squat toilet manufacturer", this page comes up as one of the most relevant on all the Internet. That's due to all the meta-level discussion about the topic, including that previous sentence...

Squat Down Inc is a North American importer and seller of all sorts of squat toilets and components.

For those in the UK, Trent Bathrooms may be a local source.

Squat pans are available in stainless steel from Franke in Poland. 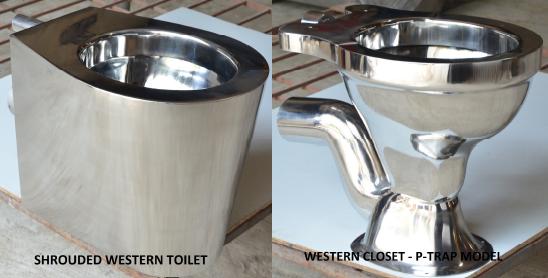 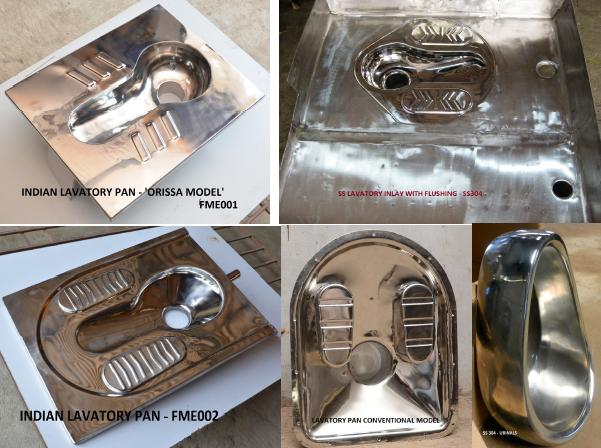 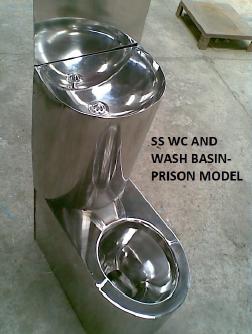 Or, contact Normo Metal in Turkey or consult their catalog. 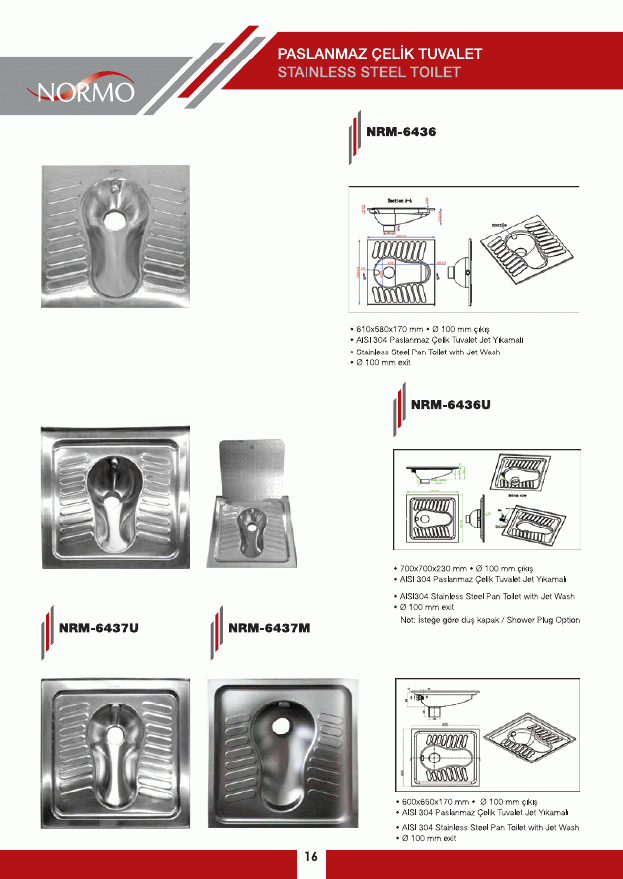 U.S. squatting enthusiasts beware — The Uniform Plumbing Code developed by the International Association of Plumbing and Mechanical Officials requires that toilets meet certain standards to be accepted by official regulations and licensed contractors will not install non-UPC fixtures for you! The requirements address the trap liquid seal, which in a floor-mounted squatter likely require something like 16 inches (or 40 cm) clearance below floor level. Above the first floor this could mean either a lowered ceiling on the floor below or a raised platform for the squat toilet.

IAPMO was founded in 1926 under the name Western Plumbing Officials Association by a group of Los Angeles plumbing inspectors "to advance the latest and most improved methods of sanitation; to promote the welfare of and harmony between the owner, the builder, and the craftsman; to accomplish a uniformity in the application of the provisions of the ordinances; and to promulgate the mutual benefit of the members." It coordinates the creation of plumbing, mechanical, swimming pool, and solar energy codes. The first UPC or plumbing code was officially adopted in 1945, and the group changed its name to IAPMO in 1966.

If you plan to build your own, you might want to adhere to the U.S. Army official specifications. A U.S. Army Corps of Engineers specification for building squat toilets in Saudi Arabia contained, within item P-1a (WATER CLOSET), section 3.9 (PLUMBING FIXTURE SCHEDULE), page 15400-47, the requirement that "Flushing shall be in conformance with FS WW-P541 with complete visual washdown from non-splashing flushing rim." and that the "integral, skidproof foot pads" shall be elevated 13mm above the finished floor level. FS WW-P541 is a U.S. military standard for flushing.

Installing a Squat Toilet in the U.S.

Squat toilets are a very small fraction of the North American market, and the regulatory environment further discourages would-be manufacturers and importers. Here is some correspondence that might provide you with some suggestions. In September, 2013 I received this message, full name and address redacted:

I am hopeful that you can assist me in locating a U.S. manufactured squat toilet. I have found many manufactured in China but they do not meet the U.S. plumbing codes. I did pick one up from Blue Earth but it is just a standard squat toilet made in China that Blue Earth has put their name on. It is not UPC compliant. From what I understand the squat toilet must be UPC certified to be installed by a licensed contractor in U.S. homes. If it is not compliant with U.S. UPC then the inspectors will not approve the work. I have called most of the U.S. toilet manufacturers and they said they never made a squatting toilet and they never will. Do you have any information that may help me in my pursuit?

I replied that American Standard used to make them, or at least sell ones made with their name on them. Geoff then replied:

Thanks for your prompt response to my question.

I have contacted American Standard along with several other manufactures and the answer is always the same....no one knows anything about a squat toilet ever being made or sold in the U.S.

I have been at this for a long time and really don't know where else to turn at this point. It appears you are my last hope..... I understand you are busy, however when things slow down could you please see if you can assist me in finding a company in the U.S. that manufactures or sells a squat toilet.

I looked around and found that Zurn had one listed. I also suggested he contact Toto USA, as they're a US branch of a Japanese company that would mostly make squatters for the home market. Geoff checked into Zurn and replied:

When I spoke to Zurn they said they really don't sell too many of these units..... I can see why.

Then in January, 2014 I received another query:

I've copied a photo from your French toilet page and attached it here. I'm looking to purchase such a squatter and have it shipped to Los Angeles. New or used would be fine so long as I can afford it.

Thanks in advance for any information.

Maybe you can't have a proper squatter.

Maybe you rent your home and your landlord doesn't want to replace the toilets.

You could build or buy a squatting platform that fits around your toilet. The best design I've seen is the SquatJoy system. 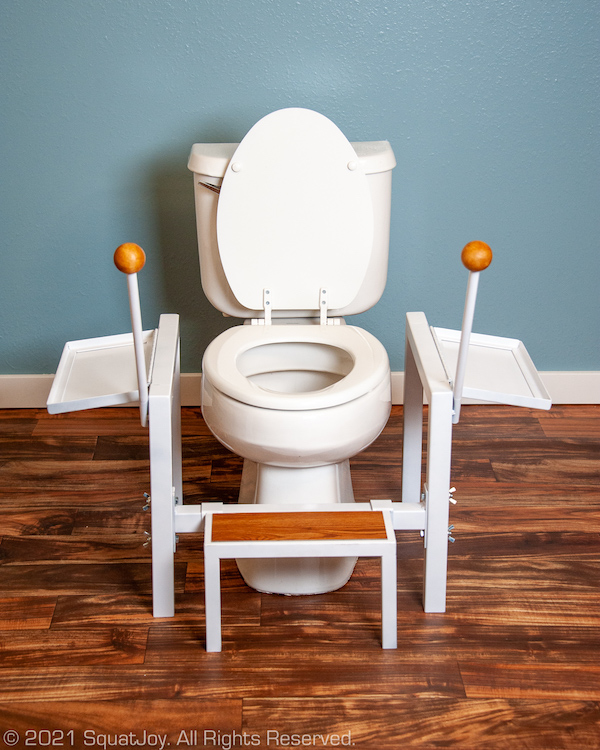 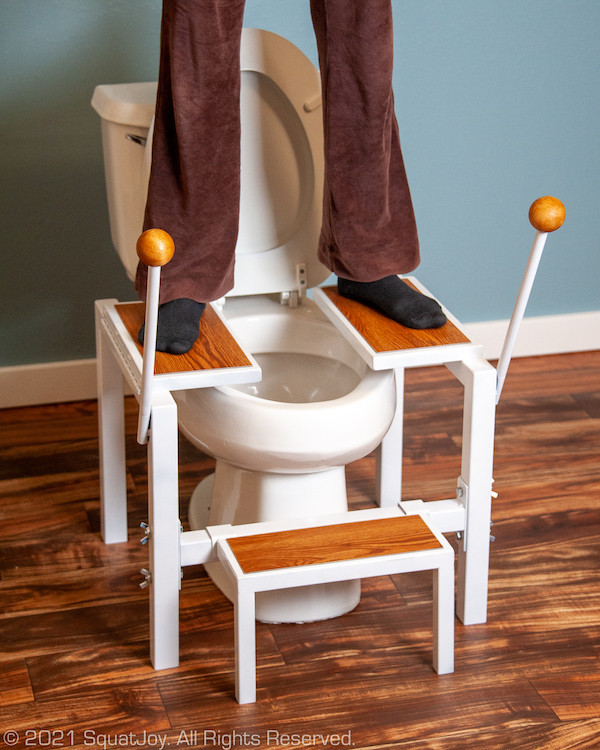 You could buy a small stool like those shown here.

NaturesPlatform.com sells one of these elevated squatting platforms: "It has a five-degree slope so that you don't have to balance on the balls of your feet. It folds up in 3 seconds so other family members are not inconvenienced. It is lightweight, but still strong and stable enough to hold a 300-pound man or woman." Too bad that 5-degree slope is not included in FS WW-P541!

The Nature's Platform inventor and site's author claims that "The knowledge it presents has been described as 'the greatest medical breakthrough of all times.'" Seriously? Telling people they should squat to poop is supposed to be "the greatest medical breakthrough of all times"? I still think that the discovery of microbial transmission of disease, the development of immunization, the discovery of penicillin, and a nearly complete elimination of smallpox and polio rank significantly higher.

As for squatting platforms from other parts of the world in various materials:

The Evaco is built of Stainless steel and wood, and is made in Singapore for the southeast Asian market.

The In-Lieu is built of plastic by the Rotadyne company in Australia.

The Lillipad is built entirely out of wood in New Zealand.