All of those names apply to the plumbing in this nation of two major islands just off the South American coast and beyond the end of the Antilles island chain slightly outside the Caribbean Sea. I went to Trinidad to do some Linux security work for TSTT, the national phone company. Luckily for me, this was in January. I left the winter of Indiana for the tropical warmth of the southernmost islands of the Caribbean. And, I was there in the period leading up to Carnival, so I got to see the preparation and hear the bands practicing. I stayed at the Kapok Hotel while doing the Linux job, but then I stayed on for a few days on my own and moved to Pearl's Guest House, a great place to stay in Port of Spain, Trinidad & Tobago. 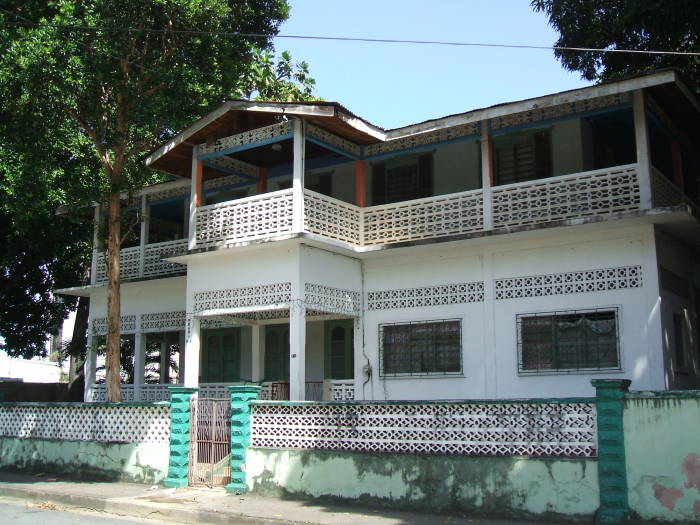 This is the shared toilet upstairs. Trinidad uses the North American system: 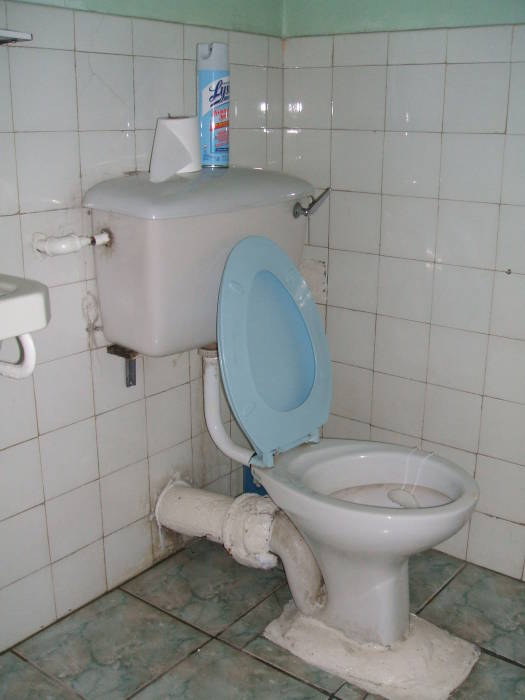 Yes, in Trinidad they speak English that is much more British than American, and so they would call it a "rubbish bin". If you call it a "trash can", they will probably understand what you mean as American satellite TV programming is popular. That means that they can easily understand Americans while we struggle with the thick Trini accent. It's no problem, just part of the fun of visiting.

Why was I in Trinidad?

Visiting and
working in
Trinidad

I was in Trinidad doing some Linux security work for TSTT, Telecommunications Services of Trinidad & Tobago, the national phone company. They were running a mix of Unix family servers and were moving to a more predominantly Linux environment. See my page on travel to Trinidad for much more on this trip, with lots of pictures.

The Kapok Hotel is in a northern area of Port of Spain. The job was at a TSTT facility in Chagauramas, out the peninsula to the west. I arranged for a driver to take me out there every morning. In the evenings I would return on a maxi-taxi, a shared van similar to a Turkish dolmuş.

The maxi-taxis run standard routes but not on any fixed schedule. They go when they get full enough and pick people up and let them out along the way. The vans are built to a standard design, you pick them out by the colored stripe running all the way around it. The yellow route, the red route, and so on. You pay based on how far you ride. Make sure you have a fistful of TT$ 1 notes. 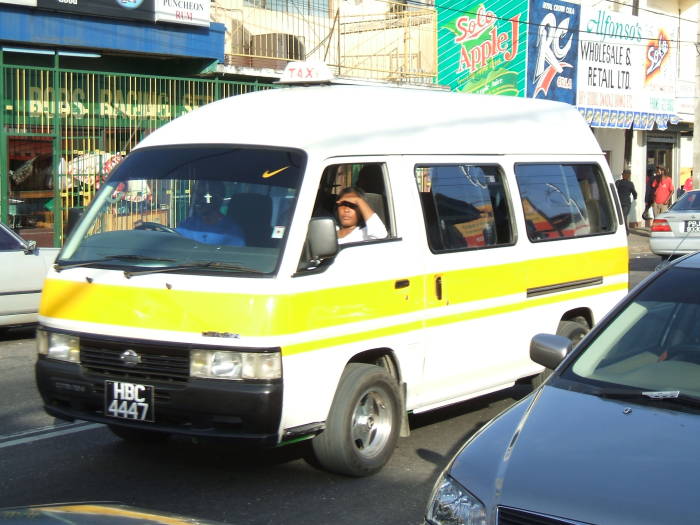 A yellow line maxi-taxi moves through western Port of Spain. Yes, vehicles drive on the left in Trinidad & Tobago.

Back to the plumbing situation, My room at Pearl's had the vital fan and comfortable bed, plus a sink and a small closet. The plumbing was down the hall.

The bathtub looks really funky because it has been lined with small ceramic tiles! I had never seen a bathtub lined with tiles. It makes for a very non-slip surface, although I imagine that cleaning it might be tedious. 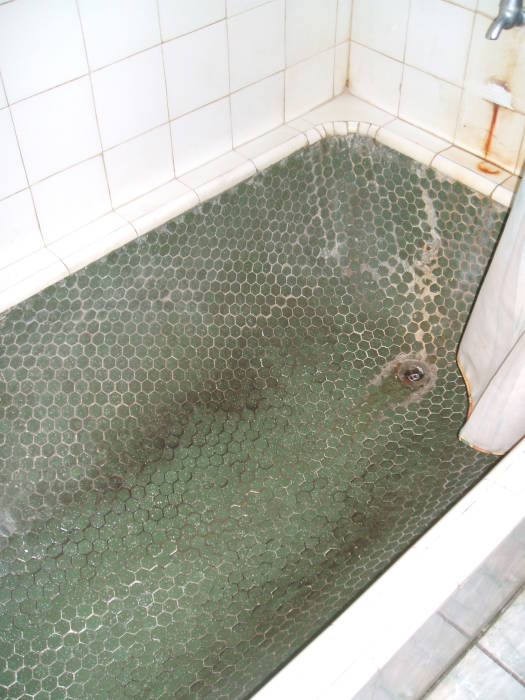 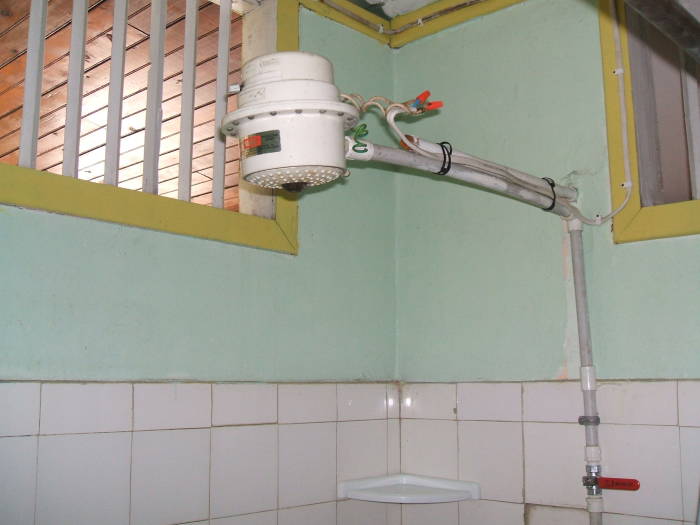 The shower head has an in-line electric water heater, called a "flash heater" as it heats the water just before it is used. There is no large reservoir tank of hot water — the water is immediately heated as it passes through this combination heater and shower head. 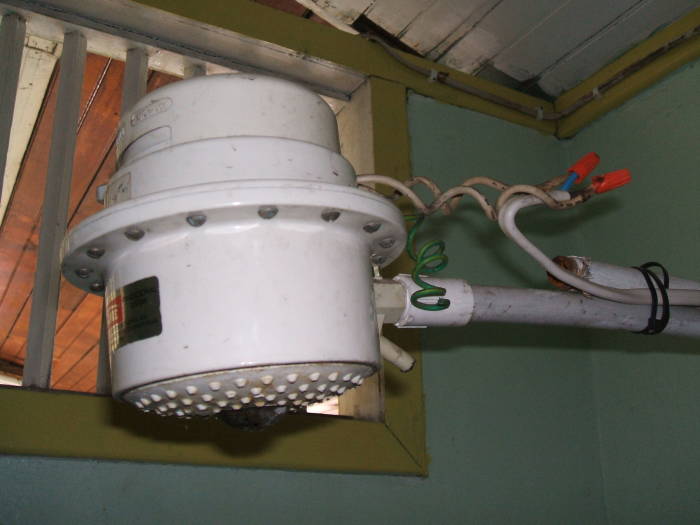 Notice that the user cannot adjust the temperature in some of these systems. The orange knife valve as the pipe runs up the wall turns the flow off and on. The flow turns on the heater. There will be a temperature control on the flash heater, but it may be controlled by a small screw and unavailable to the casual user.

This method of mounting keeps the electrical wiring out where it can be easily inspected. Don't worry about that dangling green wire, the electrical ground is provided by the cold water supply.

Many of the bars in Trinidad feature enormous tank-like urinals.

There's just that trough, the sink, and nothing more, so it's pretty obvious that it's the urinal. But still, it seems like you're doing something you probably shouldn't.

All the same, it's not too strange. I have seen similarly unusual urinals in the U.S.

This one seen here at the 52 Bar along the Western Main Road in Port of Spain. 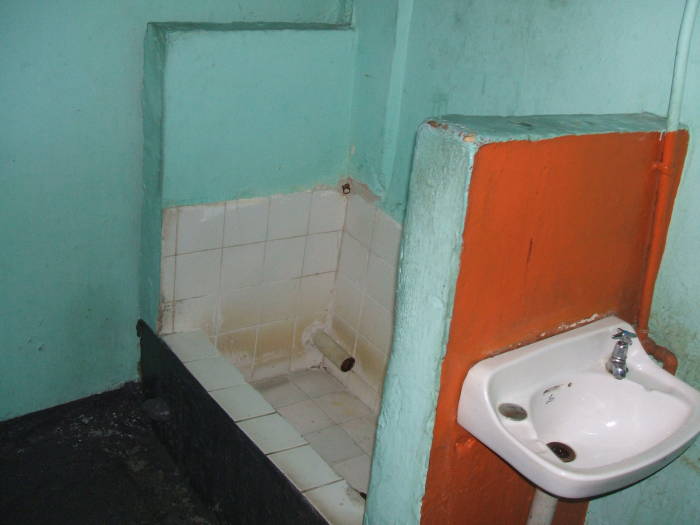 One absolutely crucial phrase of Trini English you must learn is:
casual lime

Lime can be used as either a noun or a verb. It refers to a party, to happy hour, to relaxing with friends, the end of the day, whatever.

You must participate in casual lime! An especially good one can be called a sweet lime.

And your limes, either sweet or merely casual, will likely involve plumbing like this.

Click here to see many pictures and stories from my trip to Trinidad.