The Barbary Coast was a red-light district in San Francisco from 1849 into the early 1920s. It was created during the 1849 California Gold Rush. Tens of thousands of miners were flooding into the city, leading to many business opportunities catering to them. It was a three-block stretch of Pacific Street, since renamed as Pacific Avenue, between Stockton Street and Montgomery Street. It later expanded into the surrounding blocks

The city's population grew from just 492 in 1847 to over 25,000 in 1849. There was very little law enforcement, really very little city government of any form, so crime florished. Prostitution, violence including frequent murder, and more. The San Francisco Herald wrote:

The upper part of Pacific Street, after dark, is crowded by thieves, gamblers, low women, drunken sailors, and similar characters... Unsuspecting sailors and miners are entrapped by the dexterous thieves and swindlers that are always on the lookout, into these dens, where they are filled with liquor — drugged if necessary, until insensibility coming upon them, they fall an easy victim to their tempters... When the habitues of this quarter have a reason to believe a man has money, they will follow him for days, and employ every device to get him into their clutches... These dance-groggeries are outrageous nuisances and nurseries of crime.

Sailors began calling the area the Barbary Coast in the 1860s, referring to the North African coast plagued with pirates, slave traders, and port establishments that would lure in sailors and then drug them. The 1876 book Lights and Shades of San Francisco described the local district as:

The Barbary Coast is the haunt of the low and the vile of every kind. The petty thief, the house burglar, the tramp, the whoremonger, lewd women, cutthroats, murderers, all are found here. Dance-halls and concert-saloons, where blear-eyed men and faded women drink vile liquor, smoke offensive tobacco, engage in vulgar conduct, sing obscene songs and say and do everything to heap upon themselves more degradation, are numerous. Low gambling houses, thronged with riot-loving rowdies, in all stages of intoxication, are there. Opium dens, where heathen Chinese and God-forsaken men and women are sprawled in miscellaneous confusion, disgustingly drowsy or completely overcome, are there. Licentiousness, debauchery, pollution, loathsome disease, insanity from dissipation, misery, poverty, wealth, profanity, blasphemy, and death, are there. And Hell, yawning to receive the putrid mass, is there also. 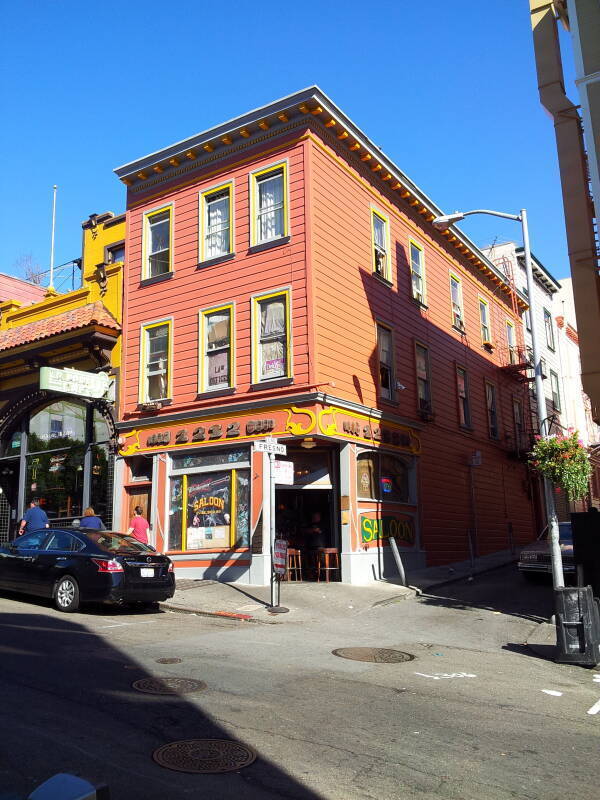 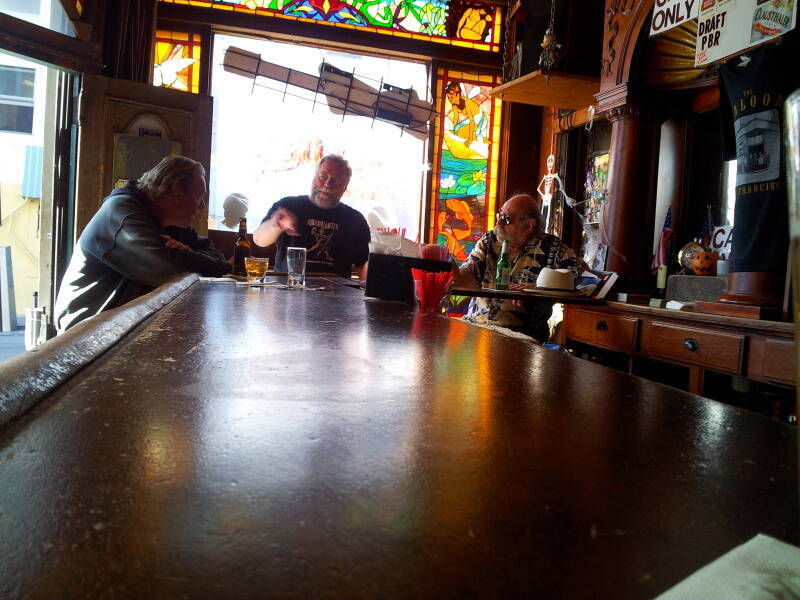 The second oldest saloon in San Francisco is just down the hill at the corner of Columbus Avenue and Pacific Avenue. Columbus is the diagonal avenue running from the area of the Transamerica Tower up the hill into North Beach and continuing northwest to the waterfront. 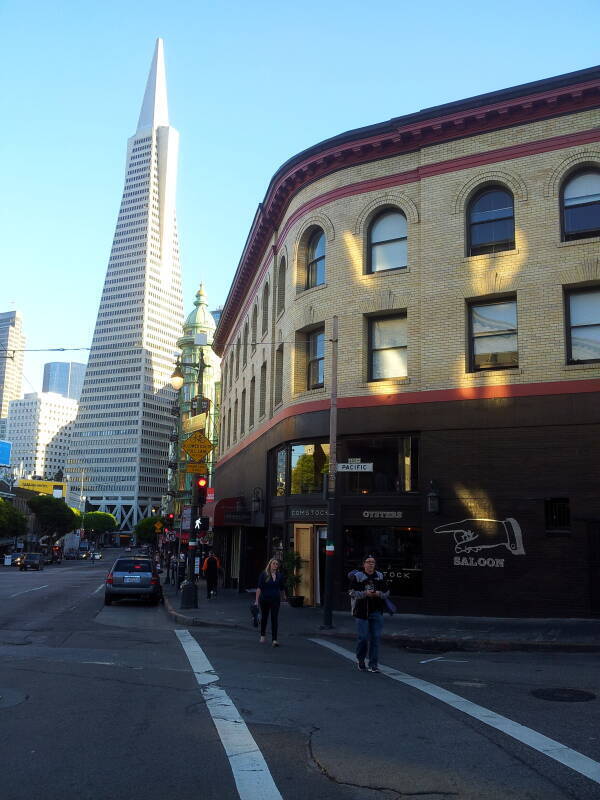 This saloon opened in 1907, just a year after the devastating magnitude 7.8 earthquake and following multi-day fires. Some argue that its location on that stretch of Pacific Avenue between Stockton and Montgomery makes it the oldest Barbary Coast saloon. 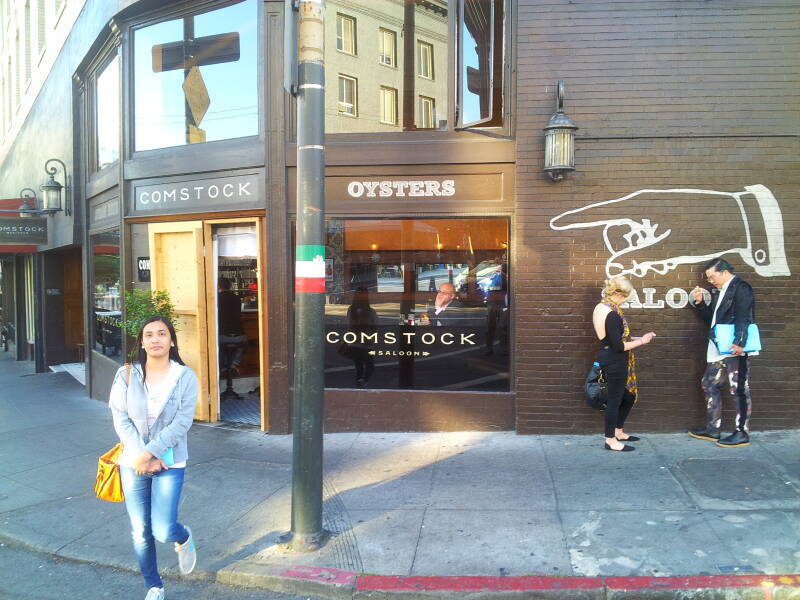 It was the Andromeda Saloon when it opened in 1907. Jack Dempsey began working here in 1913, a period when he would make money by going to saloons and claiming that he could beat anyone there, taking a cut of the ensuing betting. He went on to hold the World Heavyweight Boxing Championship from 1919 to 1926.

In 1913 William Randolph Hearst started a newspaper crusade to wipe out the Barbary Coast. Rules were adopted prohibiting dancing and women in any establishment that sold alcohol. Most of the brothels were closed in 1917.

Jazz clubs filled the area in the 1950s and 1960s, especially one block north on Broadway.

The Andromeda was renamed as the Albatross Saloon and renovated in 1977. Many coats of paint were stripped off the mahogany woodwork. The stained glass windows and skylight were restored. Also, the 1916 punkah fan covering much of the ceiling. A punkah or पङा is a large swinging fan hanging from the ceiling and operated by a system of cords run through pulleys. The punkha wallah or पङा वाला is the coolie who pulls the cords and operates the fan. The bar's punkah is made from brass and palm fronds, and is run by a small electrical motor connected via leather belts.

In the mid 1980s there were only three brew pubs in the U.S. Allan Paul purchased the Andromeda in 1985, establishing the San Francisco Brewing Company. A large copper kettle and mash tun along with other brewing equipment was custom designed and installed. Fermentation and aging took place in the basement. They were producing about 200 gallons (or six barrels) at each brewing session, for about 1000 barrels per year. Fermentation took three to nine days depending on the recipe, and aging was another several weeks to several months. 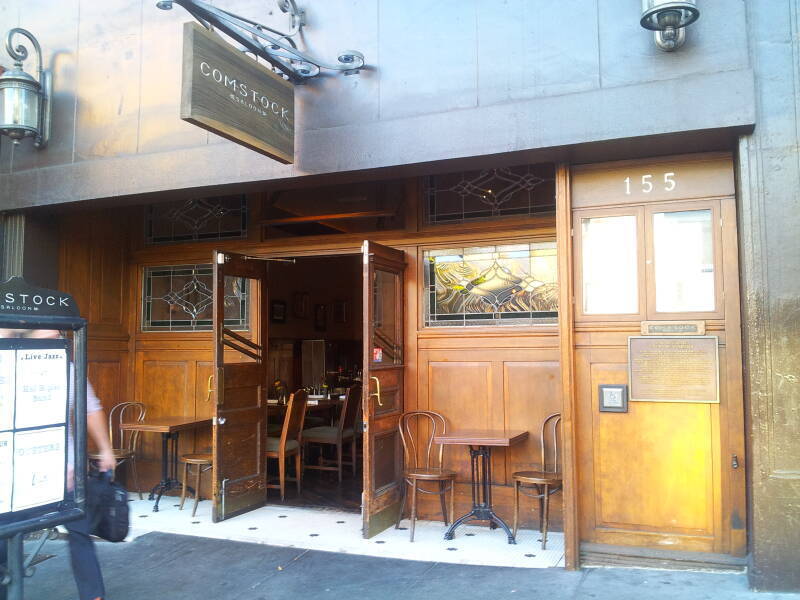 Let's go in and see the urinal. 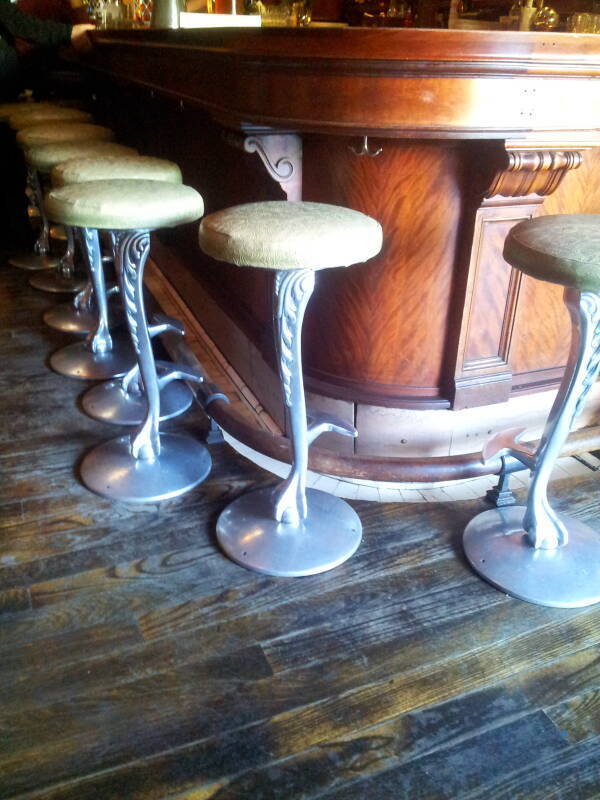 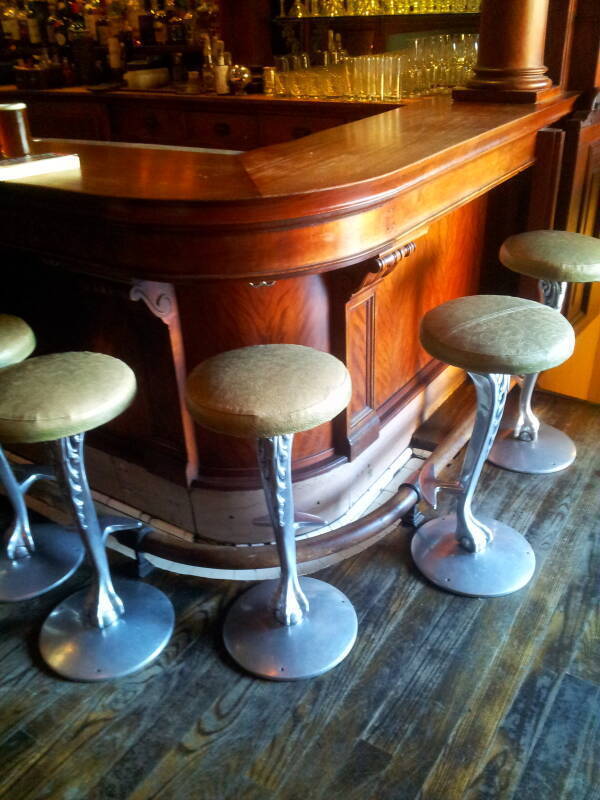 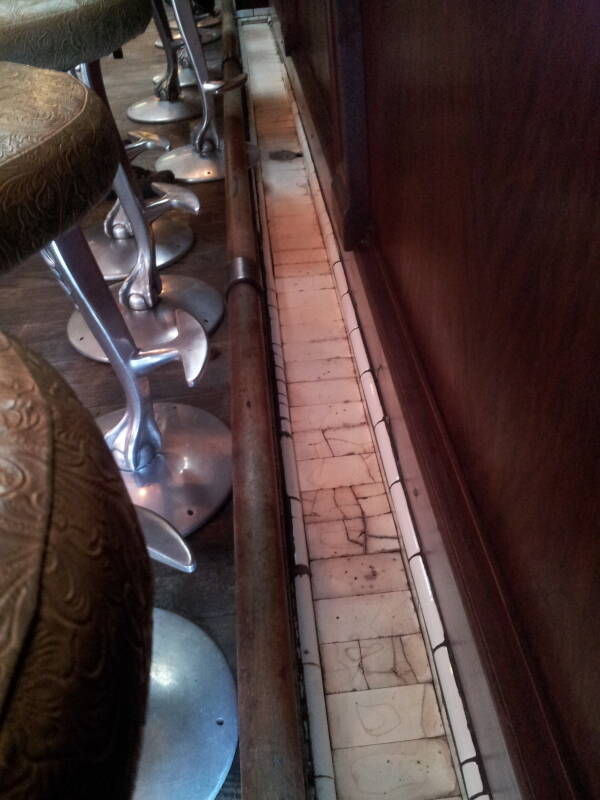