What are the toilets like in the Middle East? They vary widely! There are raised porcelain commodes to be found, especially in Turkey, but for the most part the squat toilet rules the Middle East. Especially for the more real-life local fixtures you experience as a budget traveler. I saw very few raised commodes in Syria, and I don't remember seeing any at all in Egypt. Even trains have squat toilets. Hopefully you agile and have a good sense of balance! Of course I photographed several of the local toilets, so let's take a look!

First, though, a note on the name of the region. Terms like "Middle East" and "Far East" only make sense from the vantage point of Britain. What is someone in India to make of a "Middle East" that is thousands of miles to their west?

What I have here are toilets from Turkey and Syria (and I'll just ignore the fact that half of İstanbul is on the European side of the Bosphorus). I'll call this area "West Asia" as that makes sense from any vantage point.

This page just gets us started into Egypt. For other plumbing in the region, also see the Egyptian Toilet page for examples from the Sinai peninsula of Egypt.

I've spent a fair amount of time in west Asia — eight trips to Turkey, a couple of trips to Syria, Cairo-to-İstanbul overland, etc. You realize that you have become a "West Asian Old Hand" when you find yourself discussing the relative merits of squatters over raised porcelain commodes.

There is an entire page on the differences and argued advantages between squatting versus sitting over on the Squat or Sit? page. As discussed on that page, you don't usually have a choice in this region of the world.

Most toilets in west Asia will be of the squat variety, unless you're in a business catering to tourists from western Europe and North America. Tourists from the U.S. are pretty thin on the ground in this region, so it's pretty much up to Canada to keep that business niche alive.

However, some hotels catering mostly to Turks and many of the trains feature raised commode seats. Toilets are just one way in which Turkey is a transition zone from Europe to Asia.

Here we see a long-haul Syrian bus making a toilet stop along the road from Damascus to Aleppo, Syria.

This is probably close enough for photography... 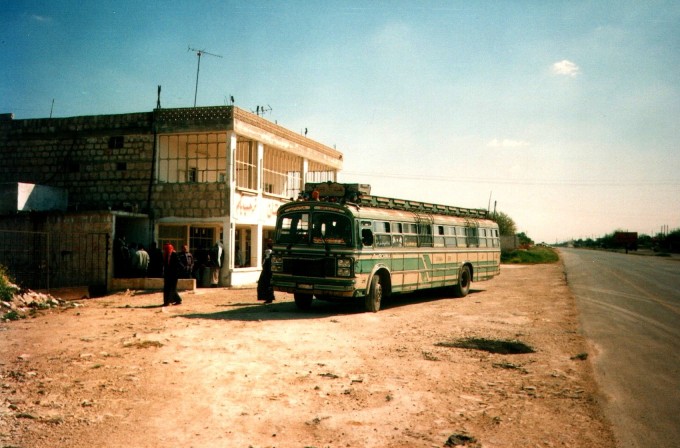 Moving on to Turkey, let's make sure we can ask for the facilities and read the labels on the doors when we get there:

This efficiently designed bathroom is at the Köse Pension in Göreme in the Cappadocia region in central Turkey.

It's a classic floor-mounted squatter with integrated plumbing. The floor and walls, up at least to shoulder height, are covered with ceramic tiles. The shower head mounts on the wall of the room, and the toilet drains the entire room. The hose/sprayer also reaches the toilet itself for hygenic purposes.

It is easy to keep a bathroom of this design very clean. Simply taking a shower does most of the work, further cleaning the toilet with hot, soapy water. 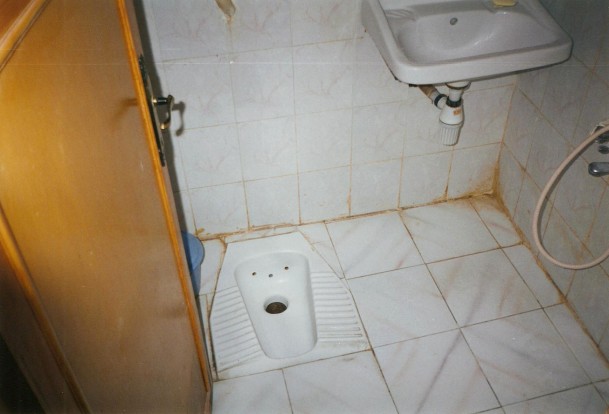 Of course, not all toilets are indoors.

One may find these facilities when trekking in Beşparmak Dağları, the Five Fingers mountain range in Turkey.

Also compare this to the pit toilet on Mt Sinai, and see the Loos with Views page. 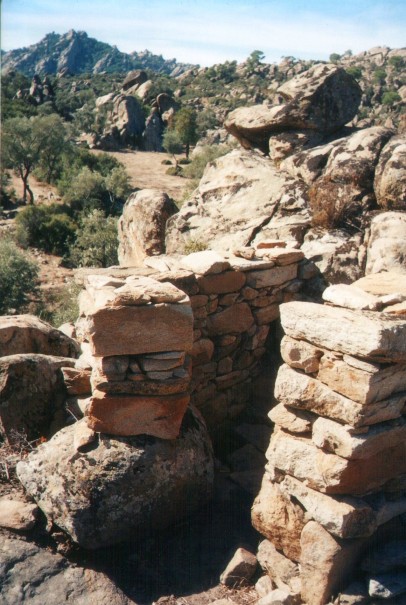 This picture really focuses on the shower, but notice the close proximity of the shower, toilet and sink in my room in the Otel Derviş in Konya, in Turkey.

The whole room drains into the shower, you can keep the room much cleaner this way.

If you need to give the toilet a quick rinse, the shower head easily reaches it.

Notice the small copper tube protruding a short distance below the rear of the seat. It is supplied by water controlled by the valve on the wall, visible just to the right of the toilet. Most raised commode style toilets in Turkey have a water tube like this, as Turkey is well east of the Paper Curtain discussed in some detail on the Wipe or Wash? page. 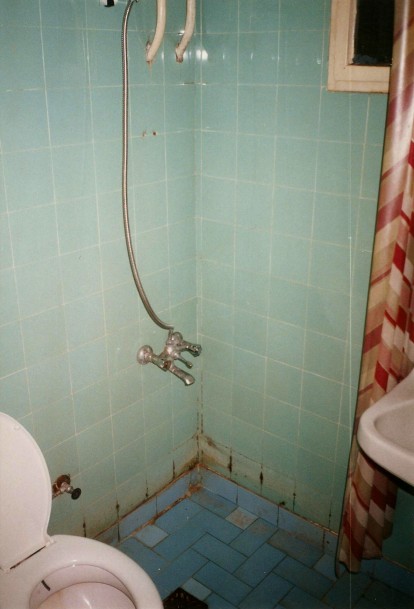 This toilet is in the fabulous Doy-Doy Restaurant in the Sultanahmet district of İstanbul, Turkey.

Note the classic spigot on the wall and the red plastic mini-pitcher. For some reason the pitcher is almost always red.... 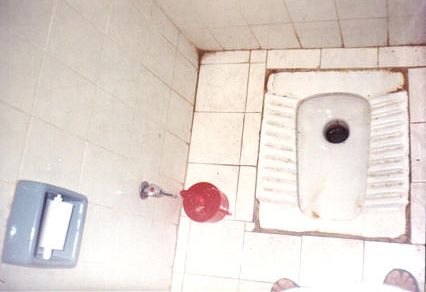 This is another great spigot-and-pitcher example.

The Mavi House is just across the street from the back side of the Four Seasons hotel. That extremely expensive luxury hotel was originally the prison featured in the film "Midnight Express" (which, it must be pointed out, was a blatant propaganda film funded by the Greek government, with a screenplay by that master of conspiracies, Oliver Stone).

This toilet is at a gas station along the highway in central Turkey.

This image is unfortunately not documented in detail, but it's from somewhere along the highway north-east of Konya.

It's not as if there's all that much difference in Turkish gas station toilets! 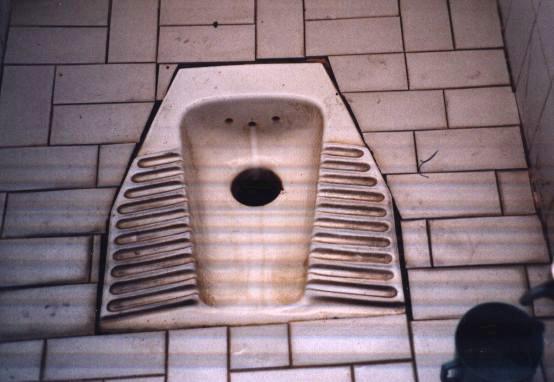 This well-ventilated shared toilet, tub, and sink are in a hotel in Malatya in east-central Turkey.

I was staying overnight in Malatya on the way to go up Nemrut Dağı, what we English speakers call Mount Nemrut, topped with a strange collection of sculptures installed by the megalomaniacal king Antiochos I Theos of Commagene around 62 BC and only rediscovered in the late 1800s. 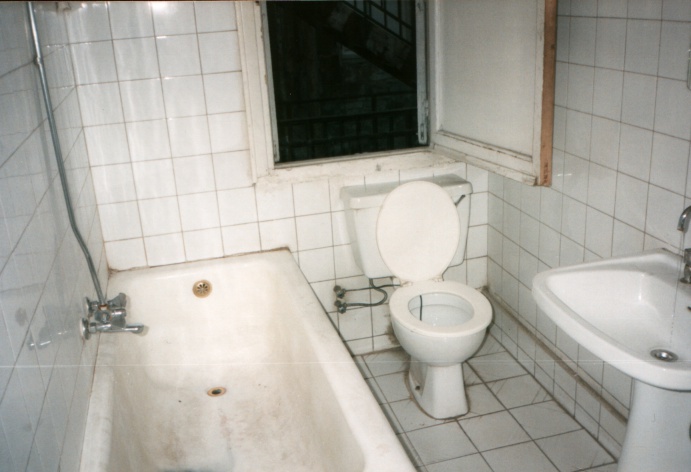 This well-labeled squatter is at the Meltem Pension in Pamukkale village, north of Denizli, in Turkey.

Notice how high the water tank is. This squat toilet gets a vigorous flush. 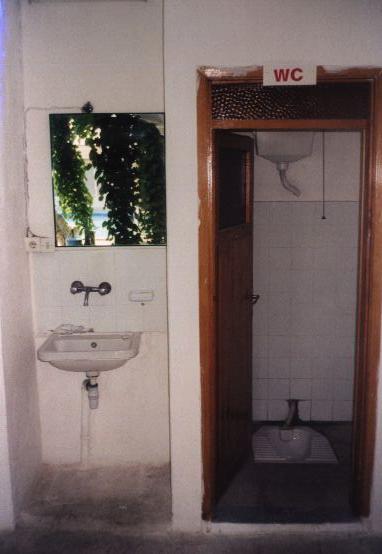 The Orange Guesthouse is one of the many guesthouses based on treehouses near the ruins at Olimpos, along the south-western coast of Turkey.

You sleep in elevated platforms in the orange orchards, but at least the toilets are on solid ground. Or, as the Romans put it when they ruled the area, commodia firma beneficius est. 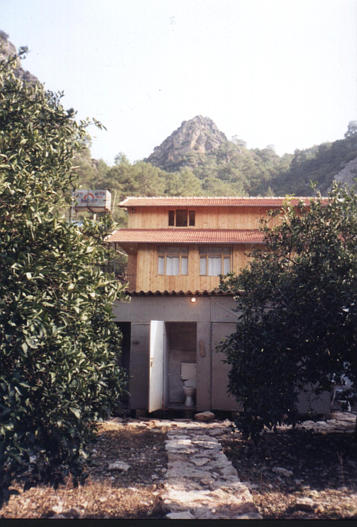 The very nice bathroom is in a renovated room in the ANZ Guesthouse in Selçuk, Turkey, overlooking the Temple of Artemis and walking distance to Ephesus. Also see the page of Biblical Toilets, New Testament. 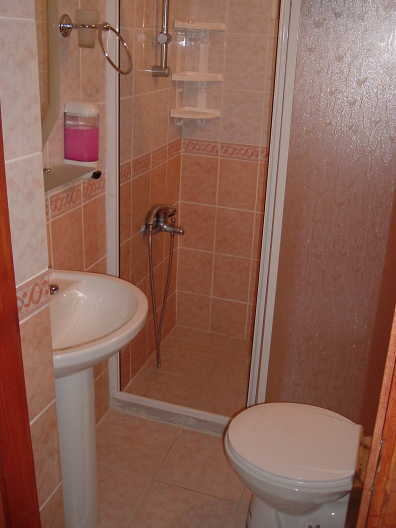 The Bosfor Ekspresi is a Turkish train that runs from İstanbul to Bucharest, Romania. It leaves İstanbul with a sleeper car, a couchette car, and a coach car.

In Gorna Oryahovitsa, in central Bulgaria, it merges with a train out of Sofia. The train from Sofia is based on one that originated in Thessaloniki, Greece, and left its sleeper cars back in Sofia. The Bulgarian coaches and the Turkish sleeper and couchette are combined and pulled north toward Bucharest by a Bulgarian locomotive. Before crossing the Danube River into Romania, the Bulgarian locomotive is replaced by a Romanian one. 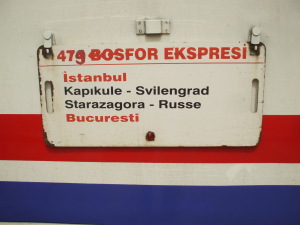 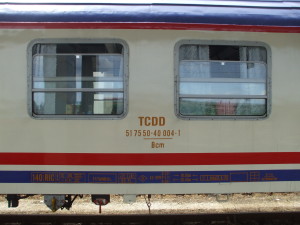 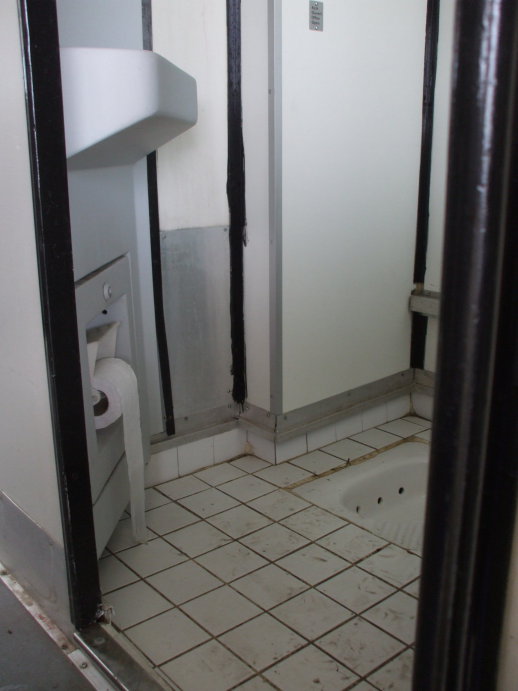 So, is this a Turkish train, a Bulgarian train, or a Romanian train? Yes!

The sleeper and couchette are definitely Turkish as they're owned by TCDD, the Turkish national rail company. And, its toilet at the end of the couchette car is in the Turkish style. 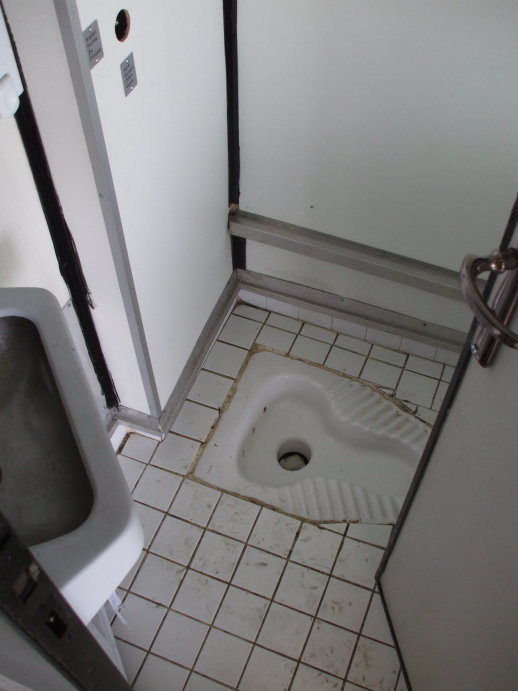 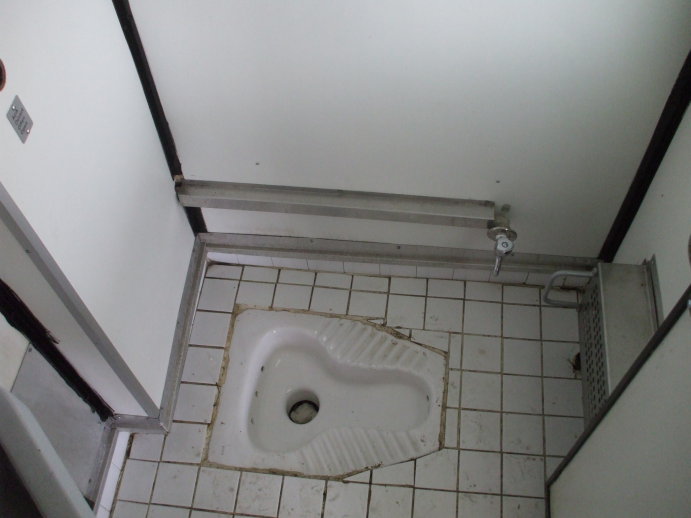 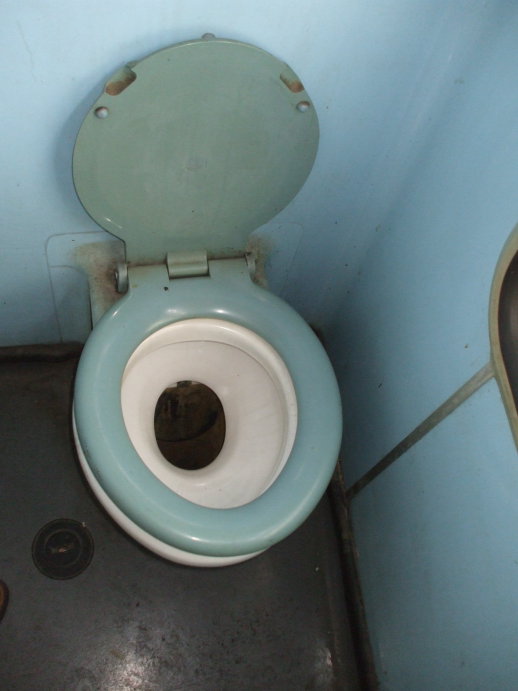 If you get on at Veliko Târnovo, you take a temporary seat in the coach. You're herded out onto the platform at Gorna Oryahovitsa as the Turkish coach is pulled off the train to wait to be connected to the next Bosfor Ekspresi bound back to İstanbul.

You're then told by the Bulgarian conductor to sit in an empty seat in the couchette car, as it will be an hour or so before the joining train arrives from Sofia. That gives the Turkish conductor plenty of time to try to scam you into paying a couchette supplement as, according to him, there will be no coaches arriving. Ignore him, it's a scam, and a rather clumsily attempted one at that.

Eventually the train from Sofia arrives and the two trains are merged. Then you find a Bulgarian owned coach with your assigned seat. And, the typically blue Bulgarian train toilet. 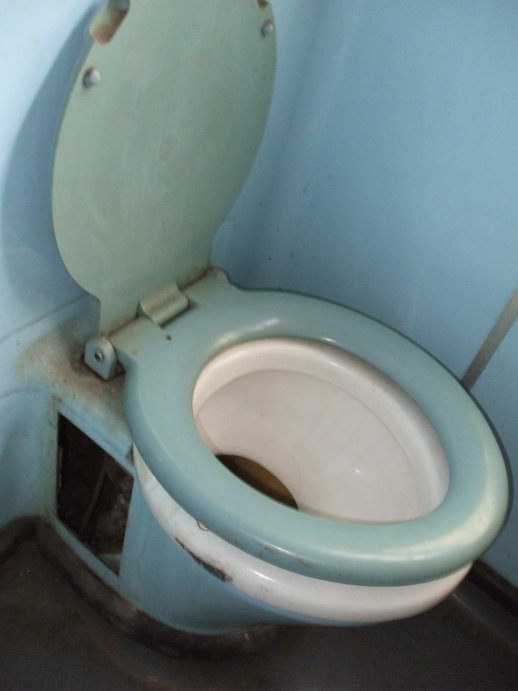 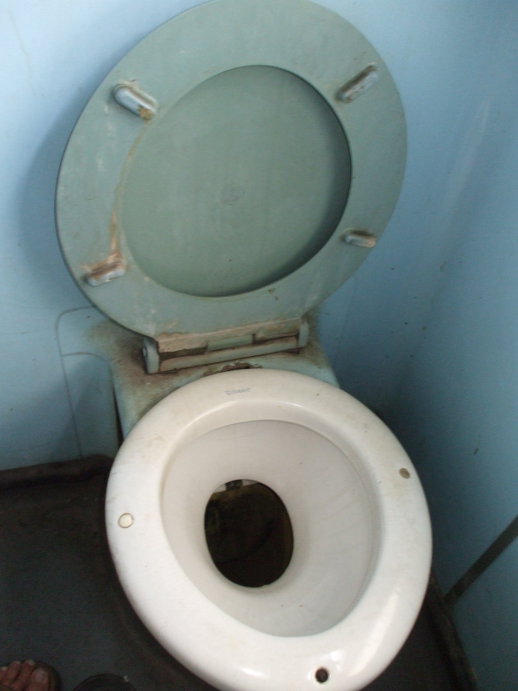 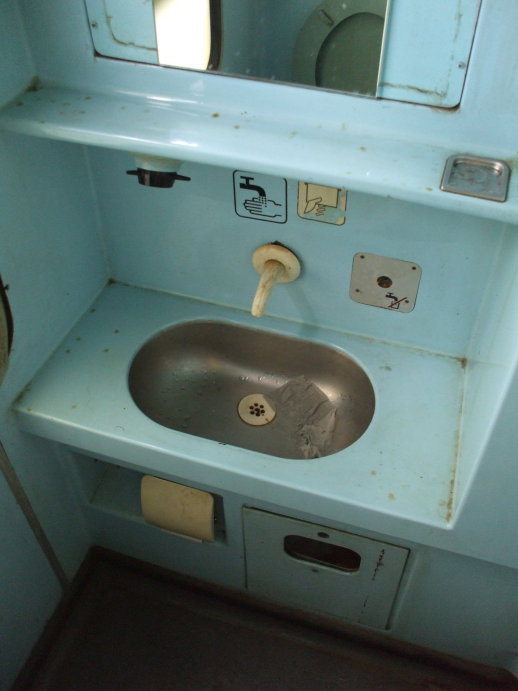 This is the lavatory on board the Turkish 1st-class yataklı vagon, or sleeper car, on the Pamukkale Ekspresi between İstanbul and Denizli.

Note the distinctively Turkish (and somewhat intrusive) thin copper line providing water in lieu of any disposable dry abrasive. It's controlled by the valve immediately to the user's right, thus leaving the left hand free for, uh, the sort of activity that means left-handed eaters are viewed with horror in the Middle East.

This image is from the late 1990's, see the three below for more recent Turkish train toilet developments. 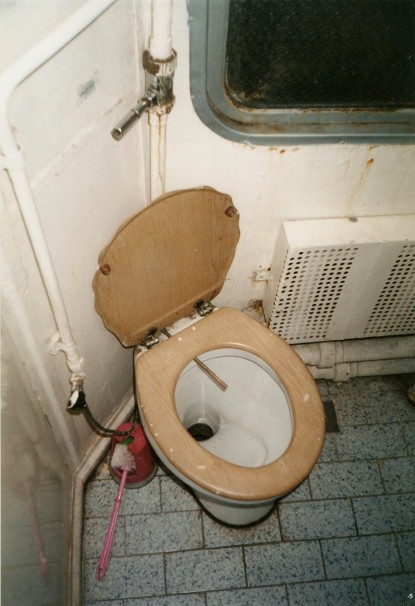 Now we're on board the Pamukkale Ekspresi in 2004 — Turkish toilet science had changed significantly in the past four years! The toilet itself is largely unchanged. 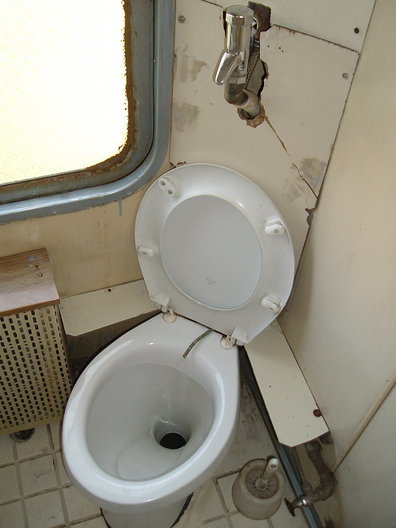 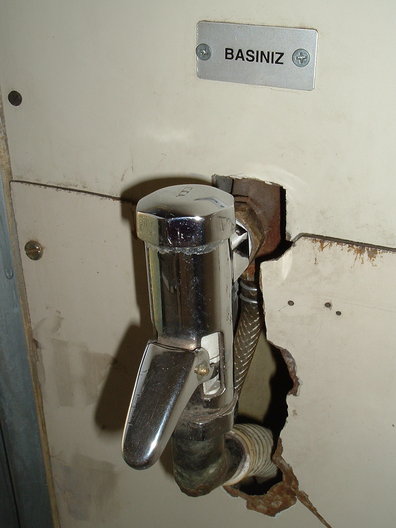 This was the strange thing in 2004 — Turkish toilets, even on board the Pamukkale Ekspresi, were largely equipped with toilet paper! OK, fine, a dumpy hotel that calls itself an Otel and doesn't really cater to foreign visitors was still uncontaminated by TP, but changes were underway. 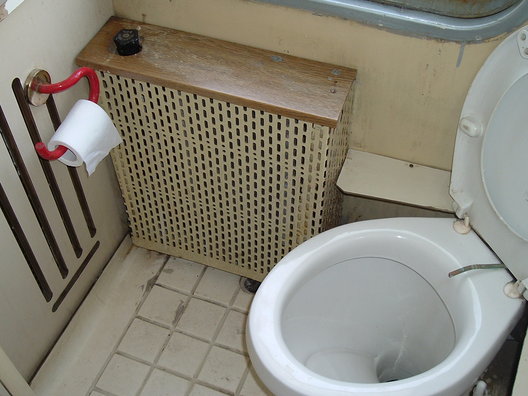 This squat toilet is also on board the Pamukkale Ekspresi overnight train between İstanbul and Denizli, but this is in a second-class coach car. And, back in 2000 or so. The toilet compartment was built largely from stainless steel.

The second toilet, a raised commode seat, is from the İzmir Ekspresi overnight train between Ankara and İzmir. It's a somewhat downscale overnight train as Turkish trains go, but it's still a nice way to travel.

Note the great similarity between this toilet and the one from the Pammukale Ekspresi above. Basically the same cars, the first-class yataklı vagon or sleeping car. 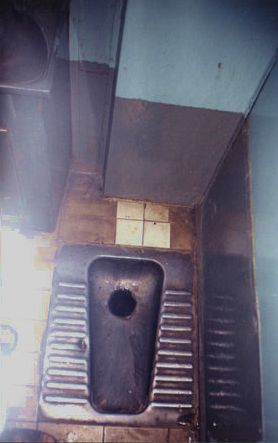 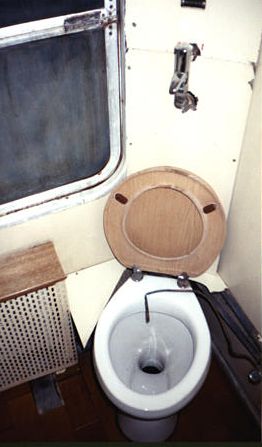 This is the toilet in the fabulous Ankara Ekspresi overnight train running between İstanbul and Ankara.

The first-class yataklı vagon (sleeping car) was the nicest overnight train I had ridden anywhere until I saw the Czech City Night train.

Brand-new high-tech sleeping compartments, comfortable beds, these clean toilets, and even a shower at one end of the car! The service is fantastic — each compartment has a refrigerator with a bottle of mineral water and a box of juice, plus a candy bar, for each passenger. A very nice ride for about US$ 35.

Also see the Bosfor Ekspresi toilet shown above in the section on Bulgaria. 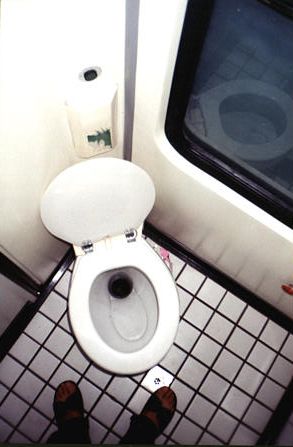 From Turkish trains to Egyptian ships...

This is a toilet on board an Egyptian ferry on the Nuweiba-Aqaba route between the Sinai and Jordan.