The Latrines of Galerius

Galerius, formally and fully known as Gaius Galerius Valerius Maximianus, was born around 260 AD. He was Roman Emperor from 305 to 311. Galerius was a ferocious advocate of the old gods, and he directed the grand finale of persecutions of Christians.

But Galerius admitted failure near his death, saying "wherefore, for this our indulgence, they ought to pray to their God for our safety, for that of the republic, and for their own, that the republic may continue uninjured on every side, and that they may be able to live securely in their homes."

Galerius died in 311. In 313, Constantine's Edict of Milan officially legalized Christianity in the empire.

Galerius' father and mother were Thracian and Dacian, respectively. Thrace today is far northeastern Greece and parts of Turkey and Bulgaria, while Dacia is much of today's Romania.

Galerius based himself in Thessaloniki because, let's face it, Rome was pretty well gone by the early 300s. Constantinople was where you found culture. Since there was an Augustus already ruling in Constantinople, and Rome was a wreck, Galerius had a base in Thessaloniki where several Galerian monuments survive.

The prominent ones are the Rotunda, sometimes thought to have been intended as his tomb, and the monumental arch. 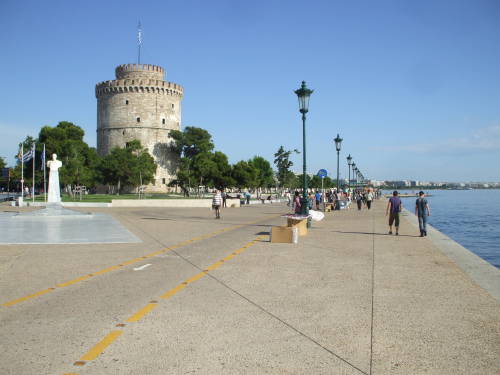 The White Tower on the waterfront, symbol of Thessaloniki.

The αψίδα του Γαλερίου or Arch of Galerius, also known as the Καμάρα or Kamara, celebrates Galerius' victory over the Sassanid Persians and the capture of the capital Ctesiphon in 298. It was covered with sculptural panels showing the official party version of the battle — Galerius mounted on a horse and vanquishing the Shah Narses and making the Sassanid warriors tremble in fear. More sweeping themes are the celebration of the unity and glory of the Roman tetrarchy and Galerius' prominent role within it. 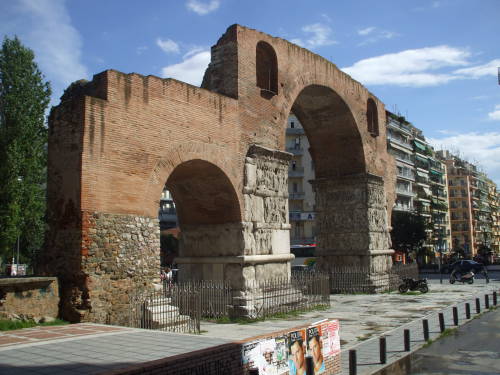 The arch was an eight-pillared gateway or octopylon forming a triple arch. The central arch spanned the Via Egnatia, the primary Roman road from Dyrrhacium to Byzantium, running from the Adriatic Sea to today's İstanbul and roughly following the northern border of today's Greece for much of that.

For more pictures and stories of travel in this region, see:
Athens to Paris by train Visiting Thessaloniki Visiting İstanbul

The Galerian Arch and the Rotunda in Thessaloniki. 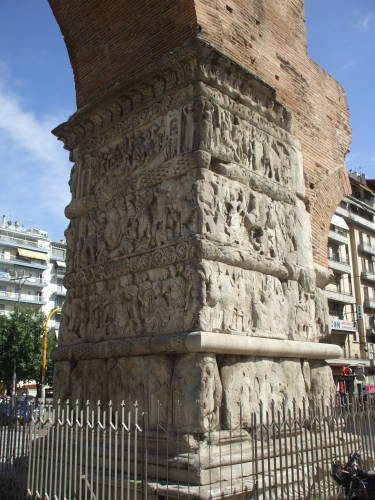 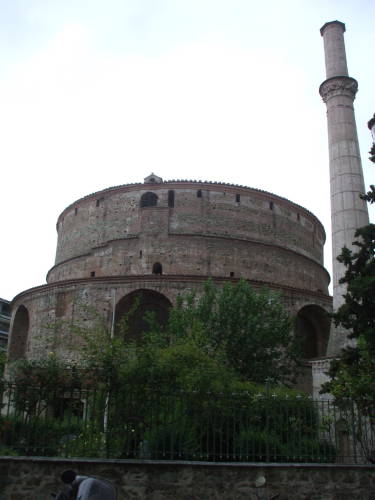 The Rotunda in Thessaloniki.

The Rotunda is a large barrel-shaped structure with a diameter of 24.5 meters and walls more than six meters thick. It is said to have been built by Galerius to serve as his tomb, but it was more likely that it was intended to be a temple (although we don't know to which god it would have been dedicated).

Galerius died in 311, from some horribly gruesome disease thought to be some form of bowel cancer or gangrene. He was buried in his palace at Felix Romuliana, now Gamzigrad, near Zajecar, Serbia.

Emperorer Constantine I ordered that the Rotunda be converted into a Christian church later in the early 4th century. It was used as a church for over 1,200 years. Then the city fell to the Ottoman Turks, and the Rotunda was converted into a mosque in 1590. It served as a mosque until 1912, when the Greeks captured the city during the Balkan War and converted the Rotunda back into a church. It's now a historic monument under the Greek Ministry of Culture, although the Greek Orthodox Church has access to it for certain festivals. 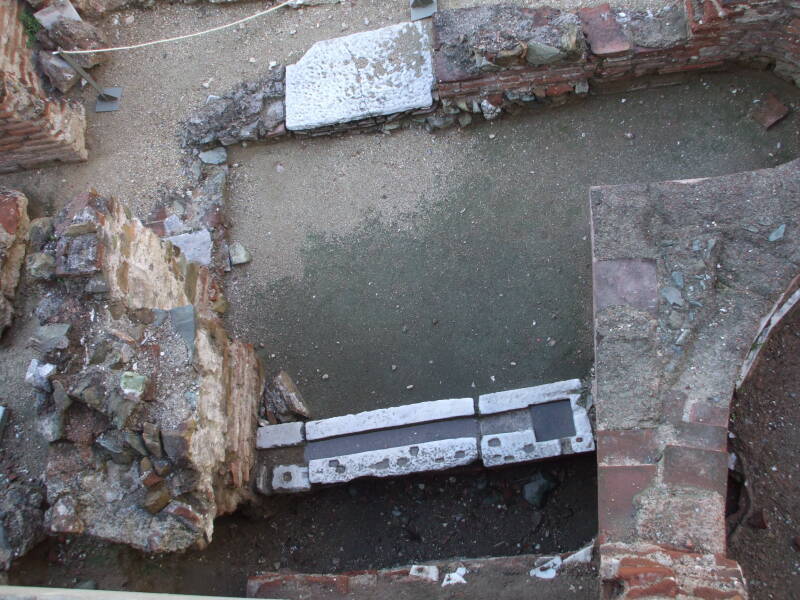 Plateia Navarinou, just down toward the waterfront from the Rotunda and arch, was the site of Galerius' palace. Of course it had latrines, and of course I photographed them.

Galerius' palace was on the east edge of the city, close to the Hippodrome, between the waterfront and the Roman road to Byzantium. 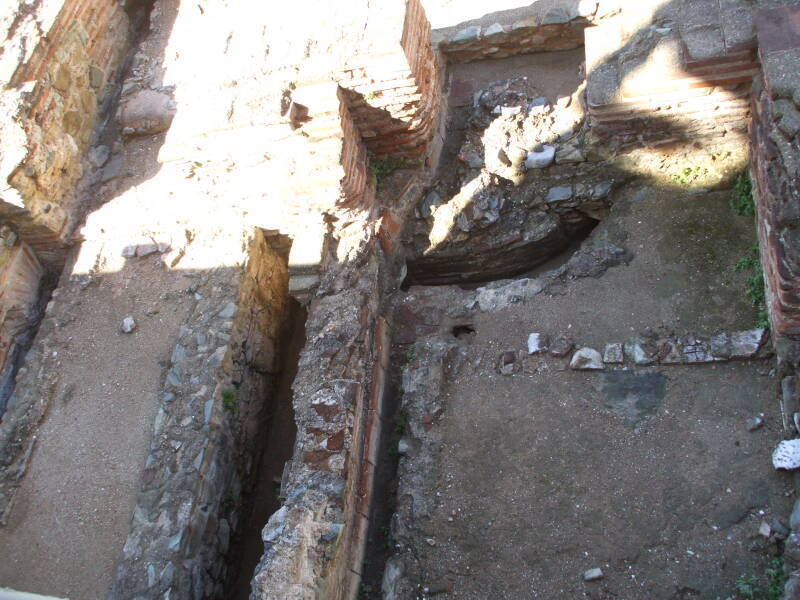 The palace had a central peristyle atrium surrounded by colonnades decorated by mosaics and a Nymphaeum among other lavish features. The overall palace complex was the administrative and religious center of the Roman city.

Europeans didn't have toilet paper until recently. The Romans, at least the higher classes and certainly the emperor, used a tersorium, also called a xylospongium, a sponge mounted on a stick. The sponge could be dipped into a water channel running in front of the row of communal toilets in the latrine, and rinsed off in that channel after use. If there was no channel of running water, a bucket of salt water or vinegar water would be used, as Seneca described in his Letters of Lucillus [70,20]. 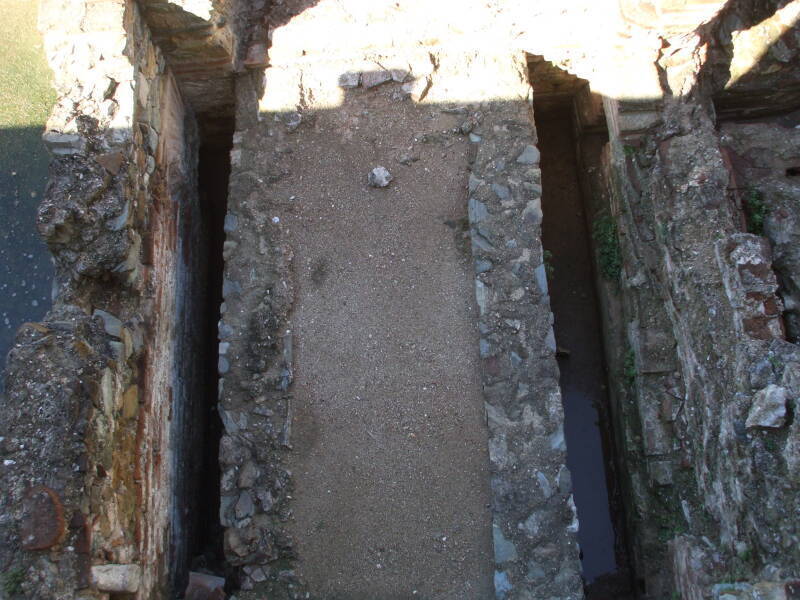 All we see surviving here is the large waste channel. Maybe Galerius used a bucket.