The outer fringe of the Roman Empire crossed the narrowest part of Britain just south of the Pictish lands, in today's northern England just south of the Scottish border. The Emperor Hadrian commanded the construction of a wall across this narrow point of Britain starting in 122 CE. Today's Britain was Roman Britannia, but only up to the point where the Roman legions could beat back the Picts coming south out of Scotland. The Emperor Hadrian had his wall built from coast to coast to fortify his northern border.

The massive construction project took six years, 122-128 AD, and involved the moving of an estimated 2,000,000 cubic yards of earth. This was the largest engineering project undertaken by the Romans.

A ditch (3m deep, 9m wide) was dug immediately in front of the wall, and the earth formed into a rounded hump beyond that. The wall itself was built of stone blocks.

There was a gate every Roman mile (1480 meters, or 0.9196 statue miles). A small fort called a milecastle guarded the gate. Then between each pair of milecastles were two observation turrets — there was an outpost every 494 meters, at least on average.

The practical implementation shifted the milecastles up to 200 meters either direction to better utilize features of the landscape or to support visual signaling to the Stanegate series of forts to the south of the wall.

Larger forts like Vercovicium were widely spaced along the wall, on its south side or up to a few hundred meters to its south.

The wall itself was constructed from locally available material — squared stone east of the River Irthing and turf to its west. The stone section would be three meters wide and five to six meters tall. The turf section would be six meters wide and 3.5 meters tall. On the north side of the wall would be first a ditch and then a berm, at least in the places where the local topology supported this cross-section.

Here you see the Imperial Roman toilets at Vercovicium Fort, a part of Hadrian's Wall in Northumberland, England. 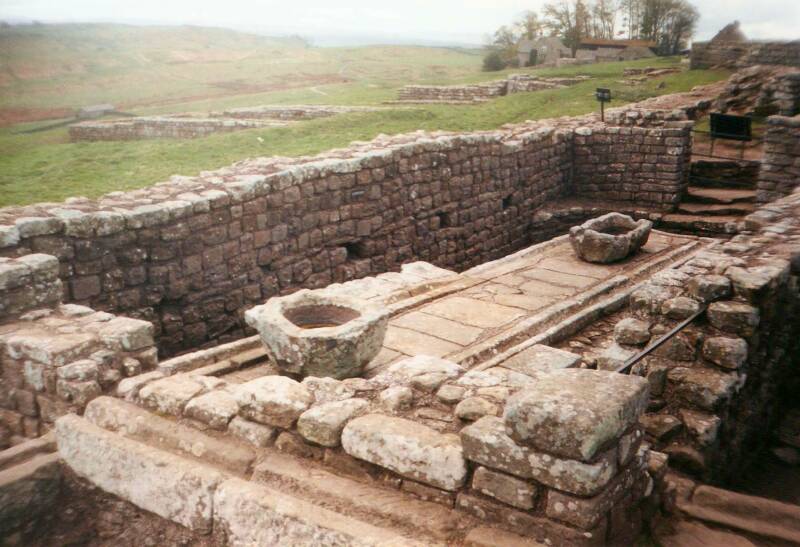 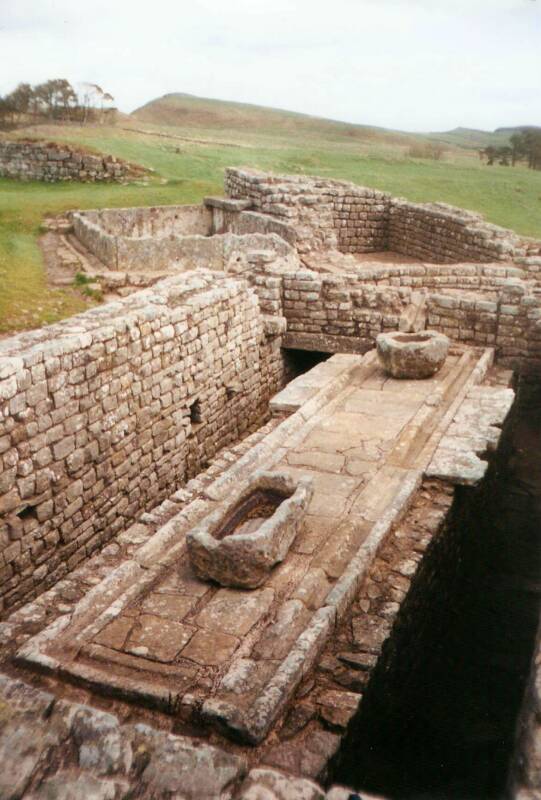 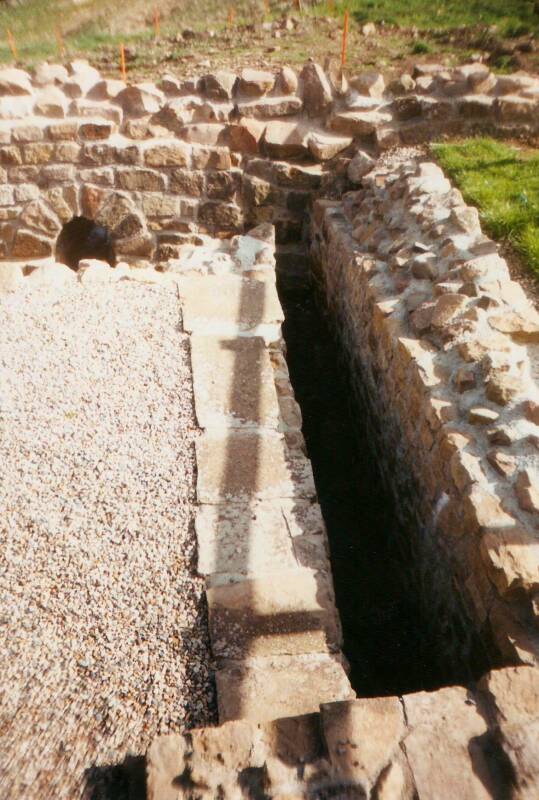 Three Roman legions were involved in the construction: the Second, Sixth and Twentieth Legions. They left their inscriptions in the turrets and milecastles, and this shows that the three legions each used their own unique designs. Very similar, but noticeably different.

The wall was mostly complete in AD 128, after about six years of construction.

These Imperial Roman toilets are at Vercovicium Fort, now known by the modern English name of Housesteads Roman Fort. It is between milecastles 36 and 37 along Hadrian's Wall. These are the latrines for the fort's military garrison. 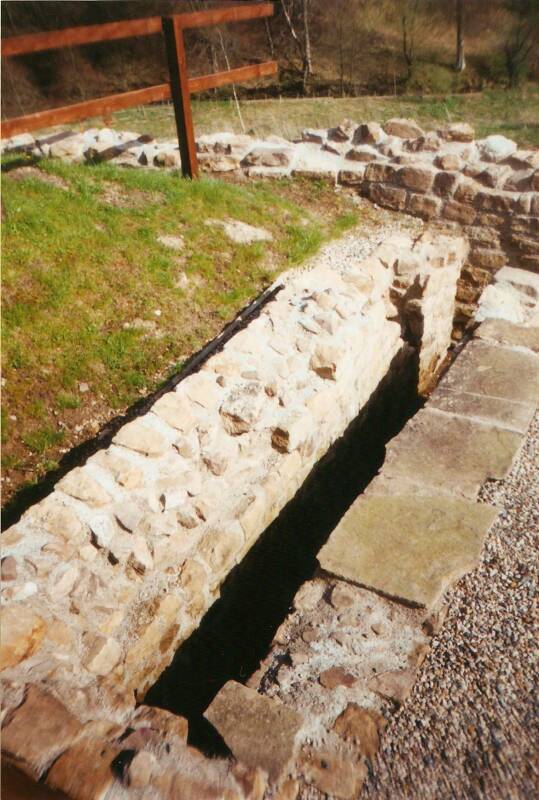 Vercovicium was garrisoned by a double-sized auxilliary infantry cohort plus a detachment of legionaries from Legio II Augusta.

In the 3rd century, it was garrisoned by Cohors I Tungrorum, along with the Numerus Hnaudifridi and the Cuneus Frisiorum.

In the 4th century, the Tungrians remained, according to the Notitia Dignitatum. But by 409 AD, the Romans were gone.

Somewhere in the early 400s the Roman administration faded away and the communities along the wall either became fully self-sustaining or faded away. They hadn't really been all that "Roman" for some time, with the military and administrators recruited locally for many generations.

More Roman plumbing can be seen at Vindolanda Fort, an auxilliary fort or castrum a short distance south of Vercovicium guarding the Stanegate road from the Solway Firth to the mouth of the River Tyne. These are at the public baths.

The earliest fortifications here were wood and turf. The first was built about 85 AD. The 1st Cohort of Tungrians probably built that one. By about 95 AD the 9th Cohort of Batavians, a unit of about 1,000, had replaced that with a timber fort. The Batavians left in 105 AD and their fort was demolished. Back came the Tungrians, who built a larger wooden fort. Then, with the Wall's construction starting in 122, this fort's men were moved north to the wall. A stone fort was built here, possibly manned by the 2nd Cohort of Nervians. 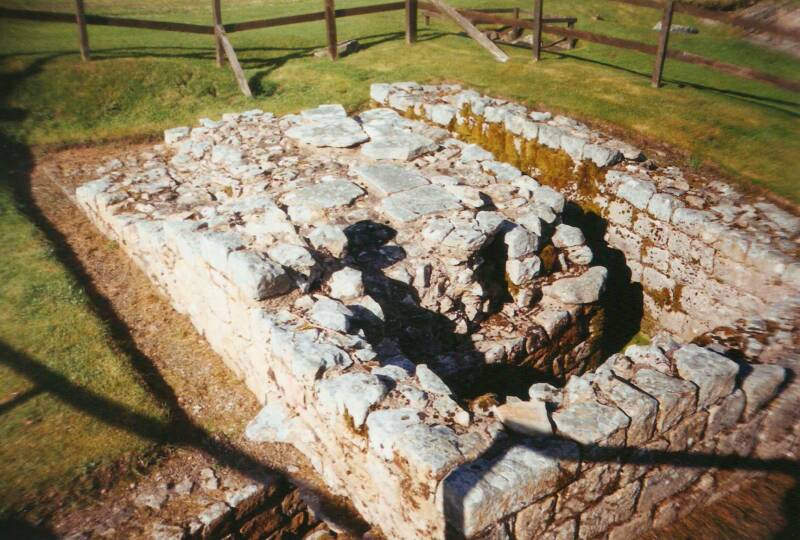 The Fourth Cohort of Gauls manned Vindolanda fort starting in the early third century. Historians initially assumed that this was just a nominal designation for a group of locally recruited auxilliary troops. However, an inscription was recently found:

The troops from Gaul dedicate this statue to the goddess Gallia with the full support of the British-born troops. 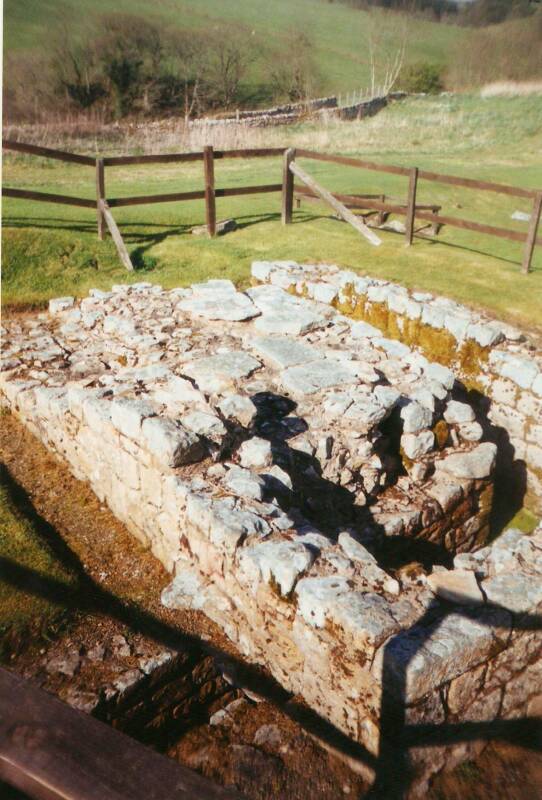 This indicates that the Fourth Cohort of Gauls really contained native Gauls who wanted to distinguish themselves from the local British recruits. The ruins of Vindolanda were occupied for several centuries after the gradual departure (or assimilation) of the Romans.

In 1973, the Vindolanda Tablets were discovered. They are the oldest surviving handwritten documents found in Britain, and provide the best view of life along Hadrian's Wall. They are the earliest known examples of the use of Roman ink writing. They date to the 1st and 2nd centuries AD, showing that there was a high degree of literacy in the Roman army and revealing details of the professional and personal lives of the administrators. There are official notes about Vindolanda fort business, and personal notes from the officers and their households. The largest single group of tablets is the correspondence of the prefect of the 9th Cohort of Batavians, Falvius Cerialis, and of his wife, Sulpicia Lepidina.

The nearly 500 tablets are thin sheets of wood. Various attributes show that the birch, alder and oak wood was grown locally. The tablets about 0.25 mm to 3 mm thick, typically about 20×8 cm in size, the size of a postcard. They were scored down the center and folded, forming diptychs with the writing on the inner faces.

They were thought to be just wood shavings until an excavator peeled apart two that were stuck together and saw writing on the inner faces. The ink was made from carbon, gum arabic and water. The tablets had been preserved by being in an anaerobic water-saturated environment. The newly exposed wood very quickly oxidized and rendered the tablet faces black and unreadable, at least to human vision.

Infra-red and multi-spectral imaging allows the writing to be seen and transcribed. The tablets were initially undecipherable, until researchers realized that they were written in forms of cursive script using an alphabet different from the Latin capitals used for inscriptions. The precise writing style varies from author to author. You can now view the Vindolanda Tablets online.

Economic decline and military coups reduced Roman stability in the late 4th century, and outside pressure greatly reduced Imperial control of Britain. The men from Rome left, but a Roman influence remained and then gradually faded into the local society. The Roman administration had gradually left by 410 AD, taking the Roman Legions with it.

The increasingly local-based garrisons were left to provide their own defense and govern themselves. Some parts of the wall defenses were occupied well into the 5th century.

Enough of the wall survived in the 8th century for the Venerable Bede to describe the wall in his Historia Ecclesiastica.

The wall was largely disassembled to re-use the stone to build local structures. In the 1700s, General Wade disassembled long sections of it to build the military road which now mostly lies underneath the B6318 highway. A man named John Clayton was trained as a lawyer and became town clerk of Newcastle in the 1830s. Much of what we can see today is thanks to his purchase of land for the preservation of the wall and forts on it, starting in 1834.

Rudyard Kipling (1865-1936) wrote a series of short stories about a Roman legionary named Narnesius who defended Hadrian's Wall against both Picts and Vikings. These stories increased public awareness of and interest in the wall.

George R. R. Martin has acknowledged that A Song of Fire and Ice, basis for the mini-series A Game of Thrones, was inspired by Hadrian's Wall. I doubt that anyone was surprised to learn this.