Yes, there is a strong connection between Fascist dictatorships and coercive misuse of laxatives, especially in Italy! After World War I, an Italian poet influenced by Friedrich Nietzsche seized a city in today's Croatia and declared it to be an independent city-state. He created a constitution that combined anarchy, proto-fascist, and democratic republican ideas, foreshadowing Italy's 1922-1943 Fascist government ruled by Benito Mussolini. He also came up with the innovation of having his black-shirted thugs forcibly administer large doses of castor oil, a powerful laxative, as a form of coercion and torture. Castor oil then became a favored weapon of Mussolini's thugs.

The Unification of Italy

Italy is a peninsula extending 1000 kilometers from south-central Europe into the Mediterranean Sea, but it hasn't been a country for much of the historical era.

Italy was under a unified rule during the Roman Empire, but after Rome gradually disintegrated, the peninsula was only loosely controlled by a series of small city-states and minor kingdoms.

A unified state of Italy only reappeared in the late 19th century, under the Risorgimento that began around the 1815 Congress of Vienna and largely culminated in the capture of Rome in 1870. Some small states resisted unification until the end of World War I.

Vittorio Emanuele Maria Alberto Eugenio Ferdinando Tommaso ruled as Vittorio Emanuele II, King of Sardinia from 1849 through 17 March 1861. On that day he assumed the title of King of Italy. He was the first ruler of a unified Italian peninsula since the 6th century AD, and ruled as such until his death in 1878.

The Italian people called him Padre della Patria or Father of the Homeland.

The Altare della Patria or Altar of the Fatherland, also known as the Monumento Nazionale a Vittorio Emanuele II or the National Monument to Victor Emmanuel II was designed in 1885. Construction started in central Rome in 1911 and wasn't completed until 1925. 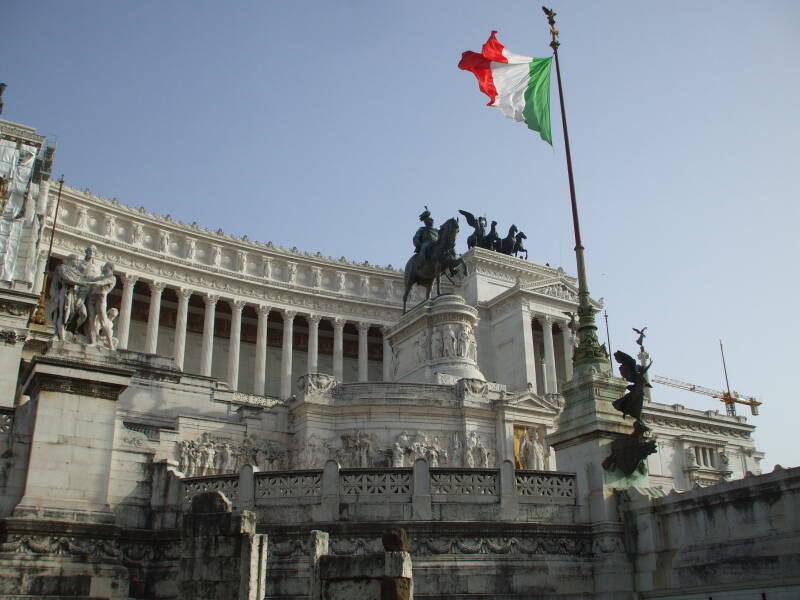 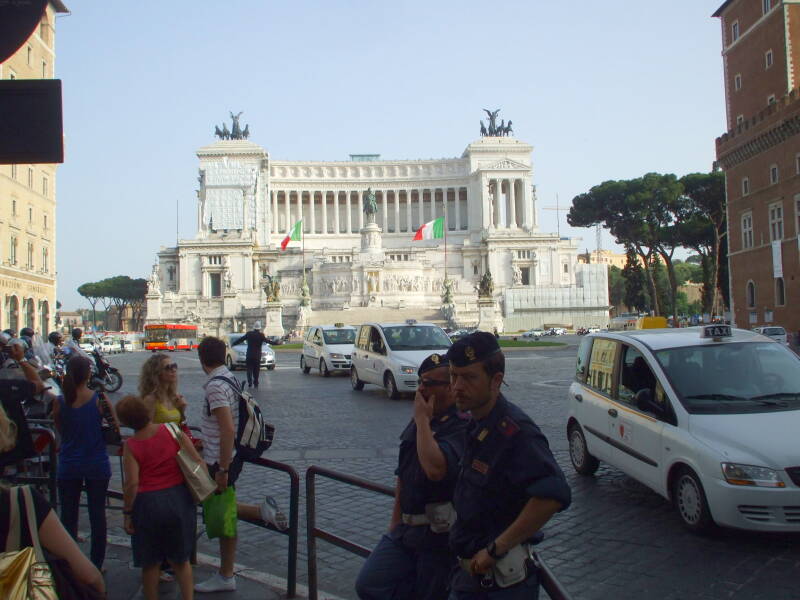 It's enormous and ostentatious. The structure itself 135 meters wide and 70 meters tall with the winged victories and other statuary on top reaching to 81 meters above street level. It houses the museum of Italian Reunification and the Tomb of the Unknown Soldier.

Today's Romans call it The Typewriter, although from its completion at least through World War II it was commonly known as Mussolini's Typewriter.

Benito Mussolini ruled Italy from 1922, seizing total power as dictator in 1926 and styling himself Il Duce while ruling Italy through 1943.

You can look down from The Typewriter across a large open square. Mussolini had an apartment in the darker brown building seen to the left of the square in the pictures below, and just barely along the right edge of the picture above. His apartment's balcony is at the center of the next-to-top row of windows facing into the square. He would appear on that balcony to give dramatic speeches to crowds gathered in the square below.

And with Mussolini we come to Italian Fascism and through that to the use of laxatives for coercion. And thus the connection, however tenuous, to this site. 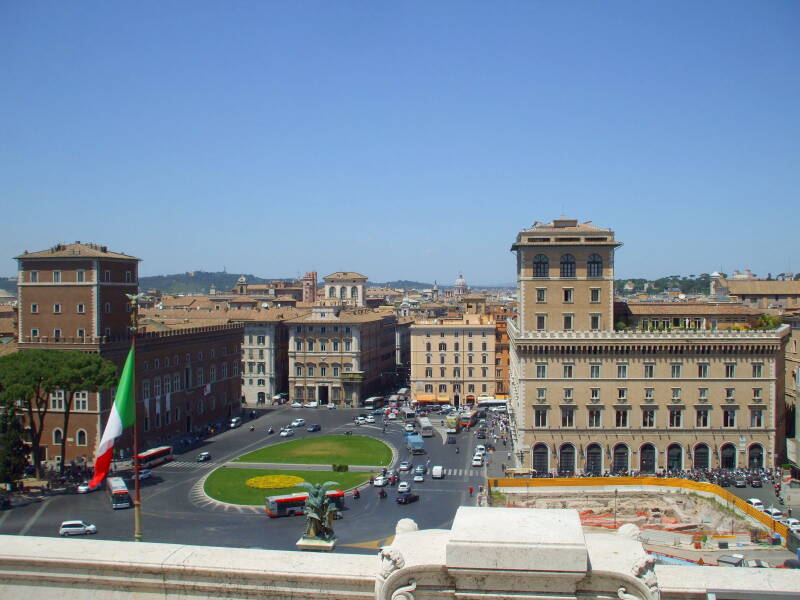 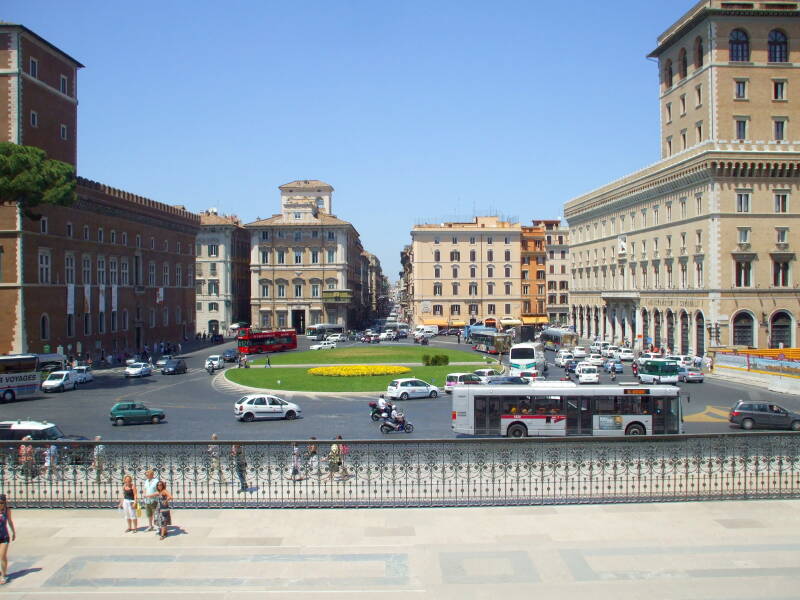 Gabriele D'Annunzio and the Rise of Italian Fascism

Gabriele D'Annunzio started as a poet, writer, journalist and playwright. He played a prominent role in Italian literature from 1889 to 1910, when the Italian people called him Il Vate or The Poet. He came to be influenced by Friedrich Nietzsche, whose writings and thoughts were also hijacked by the German Nazi movement. In 1910 D'Annunzio had ran up such enormous debts that he fled to France. In France he collaborated with Claude Debussey on the musical play Le Martyre de Saint Sébastian. The work so offended the Vatican that it placed all of D'Annunzio's works on the Index of Forbidden Books. 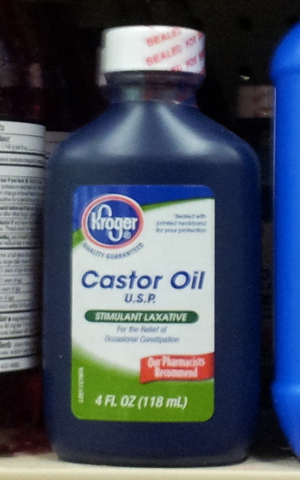 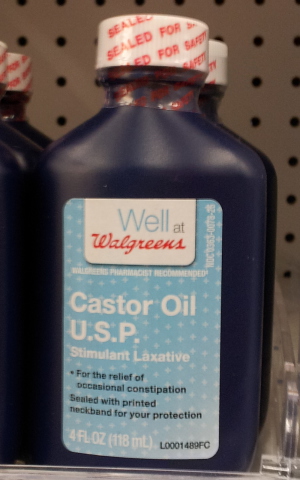 D'Annunzio then transitioned to the Italian political scene from 1914 to 1924, as the Italian people changed his nickname to Il Profeta or The Prophet. He associated himself with some elite Italian units during the First World War, the high point of which was a 700-mile round trip flight by nine airplanes to drop propaganda leaflets on Vienna.

At the end of the war he set himself up as Il Duce of Reggenza Italiana del Carnaro or the Italian Regency of Carnaro, a self-proclaimed independent city-state in Fiume (now Rijeka, Croatia) existing between 1919 and 1920. The city had been the Corpus Separatum of Fiume, a semi-autonomous city-state created by Hapsburg Empress Maria Theresa in 1775.

D'Annunzio led a military march that seized Fiume, and immediately announced that he had personally annexed the city-state to the Kingdom of Italy. The Italian population in Fiume was enthusiastic, but the Italian government wanted to have nothing to do with it. So, D'Annunzio came up with the idea of the Italian Regency of Carnaro, named for the Golfo de Carnaro where the city is located. He created a constitution that combined anarchist, proto-fascist and democratic republican ideas, foreshadowing the later Fascist system in Italy.

The Treaty of Rapallo in November 1920 turned Fiume into the independent Free State of Fiume. D'Annunzio ignored the treaty and immediately declared war on Italy. This did not go well, as the Italian army and navy bombarded the city and forced the Fiumen legionnaires to surrender.

Someone tried to assassinate him in 1922 by pushing him out a window. They successfully defenestrated him, but he survived, badly injured. This was the end of his political career, as Benito Mussolini had been appointed Prime Minister and proclaimed Il Duce by the Fascists by the time D'Annunzio recovered from his defenestration.

Mussolini had learned from D'Annunzio. Italian Fascism incorporated the Roman salute, the balcony address in which the dictator harangues the crowd, the appropriation of religious symbols for large public secular rituals, the blackshirted thugs, and the orchestrated cries of "Eia, eia, eia! Alala!" 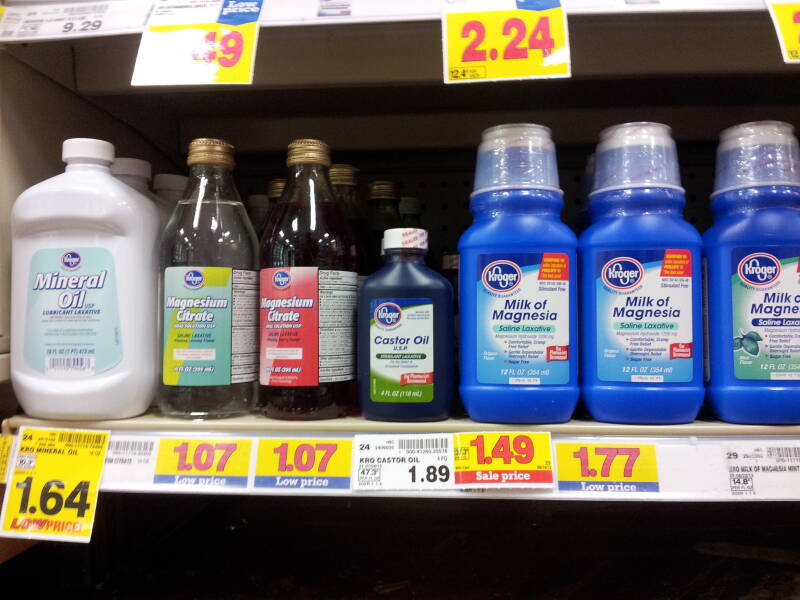 Fascist Use of Laxatives as Coercion

Mussolini had learned another technique from D'Annunzio. The Fascist blackshirts would force opponents to ingest large doses of castor oil, a powerful laxative.

There is a range of treatments to encourage bowel movements. The most natural would be to simply include adequate levels of fiber in the diet.

Once your constipation gets to the point of going to the pharmacy (or the chemist's if you're British, in which case "fibre" in that last paragraph) the next step would probably be one of the laxative saline solutions like magnesium citrate. This is a magnesium salt with citric acid, typically magnesium 2-hydroxypropane-1,2,3-tricarboxylate.

Magnesium citrate increases the salt concentration in the lower digestive tract, causing osmosis of water into the intestines. This keeps the material within the intestine more liquid, and the increased fluid volume distends the bowel, stimulating nerves within the colon wall to induce peristalsis and move the colonic contents downstream.

Milk of magnesia is a suspension of magnesium hydroxide or Mg(OH)2 in water. It is used primarily as a laxative and secondarily as an antacid to neutralize stomach acid. It works very similarly, drawing water by osmosis into the bowels.

The next stage would be mineral oil, a colorless and odorless mix of light alkanes in the C15 to C40 range, obtained from some mineral source and usually a petroleum distillate. Mineral oil is obtained from minerals, unlike baby oil which is not obtained by pressing babies. It's heavier than most petroleum components, lighter than most components of solid paraffin. It works by purely physical means, lubricating the motion of material through the digestive tract.

Castor oil is the hard stuff. It doesn't really deserve the term "laxative" as its effects involve nothing related to relaxation. 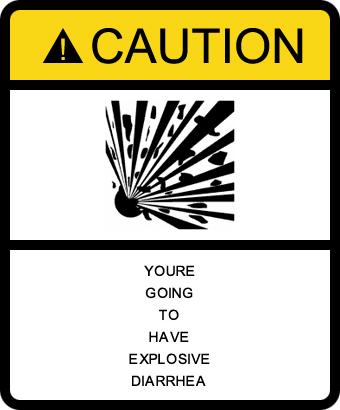 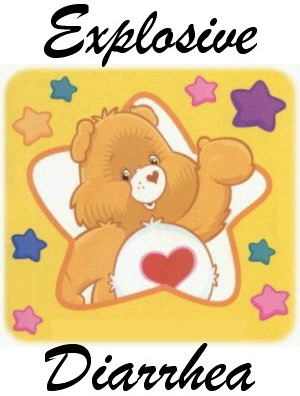 Castor oil works mainly in the small intestine, where it is digested into ricenoleic acid while causing strong spasms of the muscles of the intestinal wall. It causes cramping in the bowels, to quote one reference. This really moves things along, although at the possible expense of painful cramps, fecal incontinence and explosive diarrhea.

Ayurvedic medicine uses castor oil to enhance memory. I suppose you might be unable to forget episodes of explosive diarrhea, no matter how hard you try. So, if you start to study something you need to remember and then dose yourself with castor oil, maybe the combination will be truly memorable.

"Yes, counting to ten in Sanskrit: éka, dvā, tríni, catvari, pañca, ṣáṣ, saptá, aṣṭá, náva, dáśa. I remember the night I was trying to memorize that, it was when I had that explosive diarrhea. I kept trying to count as far as dáśa before running to the toilet, but often I couldn't get past ṣáṣ."

For more on laxatives, see the page on preparing for a colonoscopy.

Anyway, back to the Fascists.

The resulting severe diarrhea could be health-threatening or even life-threatening, especially when accompanied by the usual beatings with truncheons. Lighter doses still had extremely unpleasant effects, and with the common belief that castor oil and its effects were generally beneficial, a belief persisted for decades after Mussolini's death that lighter doses (inducing explosive diarrhea but not dehydration) would have no lasting side effects, so why not add a dose of castor oil to cure whatever ails the patient.

This, of course, just lends itself to abuse for purposes of low-key political pressure. 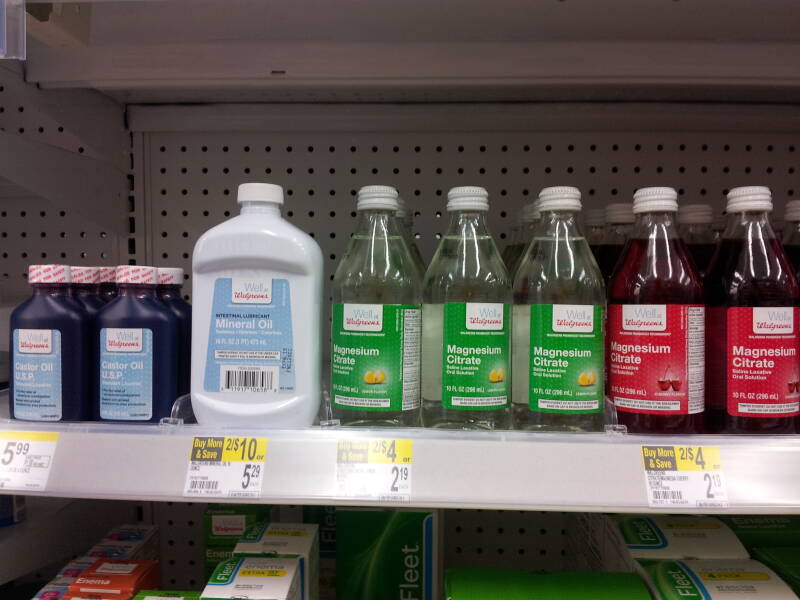 Mussolini's power was said to proceed "from the bludgeon and castor oil." Reminders of this remain in the Italian language, as manganello (bludgeon) and especially olio di ricino (castor oil) retain strong meaning when criticizing politicians, signifying an accusation of abuse or coercion.

See Federico Fellini's classic movie Amarcord for an example of the Fascists using castor oil as an instrument of torture and coercion.

The Italian Fascists were the main practitioners of torture and coercion through castor oil. However, the Spanish Nationalists under Francisco Franco also used the technique.

Bowel-related karma caught up with the Italian forces during World War II.

The Italian military had good men and good equipment. But they did not have the logistical support to get the equipment and supplies to the men, and their national leader was a megalomaniac who insisted on unrealistic goals.

Mussolini's arrogance and cruel absolute rule led to a requirement that North African Italian units about to surrender, often due to supply shortages or hopeless tasking, would first send a standardized flowery text. This pre-surrender message usually was:

An unscheduled message of the appropriate length strongly suggested that the transmitting unit was ready to surrender without a fight. Far worse for the Italians, this provided a known plaintext attack to the Allied cryptanalysts looking for that day's key protecting these routine messages along with the crucial messages between units continuing to fight, and even worse, between high-ranking officers discussing larger scale plans.

Getting to the bowel-toilet-cryptography connection, Italian units sent daily garrison medical reports at specific times and frequencies. The Italian infantry, like any infantry in the desert, was prone to hemorrhoids. However, Italian culture had led to the design of a rather prudish codebook without a specific hemorrhoid entry.

This meant that the daily garrison medical report almost always contained an explicitly spelled out LE EMORROIDI providing the Allied cryptanalysts with the daily subtraction number used to encrypt the code groups.

Nigel West's The Sigint Secrets has the background on this in its Chapter 7, drawing on wartime records now in the Denniston Papers at Churchill College at Cambridge University.