Toilets on the Greek Islands

In Greece, many things are much nicer on the islands than they are on the mainland, and these include the toilets. So let's hop on a Greek ferry into the Aegean Sea and check out the local plumbing! See my travel pages for lots of pictures and suggestions about travel to the Greek islands, including Santorini, Mykonos, Ios, Delos, Paros, Patmos, Rhodes, Naxos, and Samos.

This page has modern Greek island toilets. See the Historical Toilets section of the site for several categories of Ancient Greek toilets, and the Mainland Greece page for toilets on the mainland.

First, make sure that you can find the correct toilet!

As you will notice in one of the pictures below, you often see the pan-European abbreviation "WC" pointing the way, especially in areas catering more to tourists:

Let's start at the very beginning (and end) of the process. Here we see the headquarters of the Municipal Enterprise for Water and Sewage on the island of Mykonos.

Mykonos is a mid-sized island, with an area of 85.5 square kilometers and a population of a little over 9,000, most of them living in the main town on the island's west coast.

The main town on Mykonos is called Χορα or Hora in the usual Greek pattern of naming the primary town on an island "The Town". Most of the Hora is a pedestrian-only zone of narrow lanes. Beautiful Greek island architecture: smoothly curving walls painted a brilliant white, stone pathways, blue shutters and trim. But see my travel page for all that, we're focusing on the plumbing here!

Let's look into these typical δημοτικες τουαλέτες (demotikes toualetes, or public toilets) on the island of Mykonos. You can see the entrance, and the toilet itself.

It's a squat toilet, as the public toilets generally are in Greece.

If you need a raised commode seat, have something to eat or drink in one of the numerous restaurants and bars and use theirs.

The toilet in the restaurant or bar might be a raised commode seat. If not, well, there are plenty of tavernas on most of the islands, try the next one!

The Blu-Blu cafe / lounge / bar / Internet cafe is a good place on Mykonos to get on the net or transfer pictures from your camera to a USB stick.

Or, as you see here, to use a raised commode style toilet and wash your hands.

So you wonder what a typical bathroom looks like in a nice budget hotel on Mykonos? Here you go — this is the full setup at the Philippi Hotel, a very nice place to stay. It's at Kalogera 25 in Hora, +30-22890-22294, chriko@otenet.gr.

Here's the bathroom at the Poseidon Hotel, overlooking the harbor town of Ormos on the island of Ios.

Very clean! Notice how the floor and walls are ceramic tiles, and the floor has a central drain. This is a good bathroom design, it would be easy to keep this very clean.

This scenic head is on board the F/B Artemis ferry en route from Ios to Santorini in the Aegean.

So, it's not one of the very largest, and certainly not one of the fastest, but this class of ferry provides a wonderful atmosphere for traveling between the islands out on an open deck watching the scenery slip past.

And, if you need to make a quick visit to the head, you can keep track of the scenery!

See the dedicated page of toilets on boats and ships for the explanation of why their toilets are called "heads". 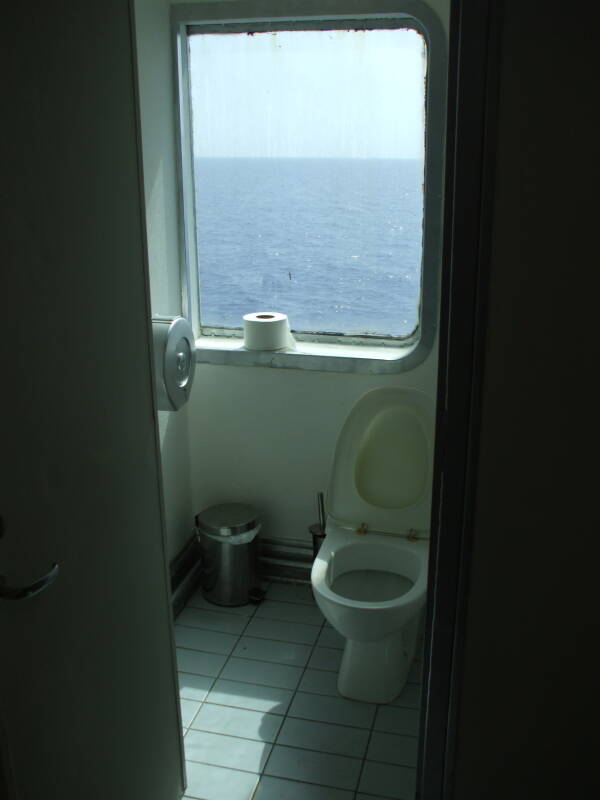 I had stayed at Petros Pension on Santorini on a previous trip, and so I got the luxury room on the top floor, the one with the kitchenette.

And, of course, my own bathroom.

The first one is just south of the main square in Fira, the main town on the island. Below you see the exterior of that toilet.

The second squat toilet is just north of that main square.

You are noticing the pattern, right? Municipal public squat toilets, and raised commode seats in many (but not all) tavernas.

These two toilets are in the Ionian Domatia in Vathy town on the island of Samos.

They're intense avacado models with forcibly removed seats and lids.

See the Where is the Seat? page for an explanation of why toilet seats are removed or never installed in the first place in many countries.

As for a domatia or δοματια, that is a small and simple lodging traditionally operated as a room rented by the homeowner. 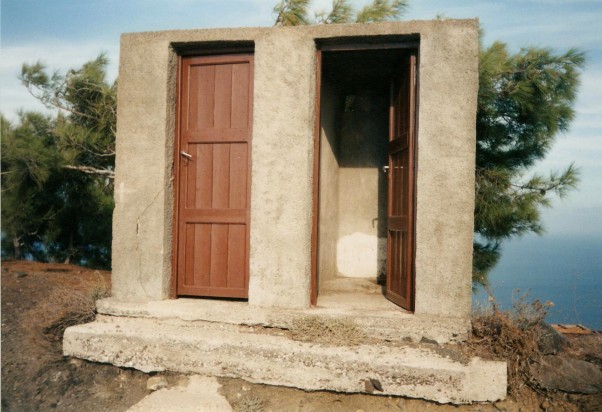 Here is something you find along the path following the ridgeline from the main town of Fira to Oia, on the island of Santorini.

It's technically known as an Aegean mountaintop dual squatter. 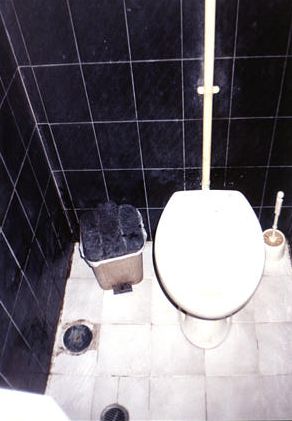 This one is in the Rodos Hostel, in the old city of Rodos, on the island of Rhodes. Seatless, as standard in Greece.

It's very monochrome, black and white. Monochrome, there's a word of Greek origin. Mono- for one, and chrome, from chroma, for color.

Here you see an overview and some detail of the ancient toilets at the Asclepion, on the island of Kos, in the south-eastern Aegean.

Part of the Dodacanese chain, Kos was the home of Hippocrates (460-370 BC). A large medical school at which Hippocrates taught was located at the Asclepeion or Ασκληπιείο, the temple to the healing god Asclepius and the most significant site on Kos. Patients would come here to seek treatment, or to make offerings of thanksgiving after recuperation.

View from the Asclepeion to Kos town, and across the water beyond that, to Bodrum, Turkey.

These temples were dedicated to Asclepius, the first doctor-demigod in Greek mythology. He was said to have been so skilled that he could raise people from the dead. Homer described him in the Iliad as a man, a physician tending to soldiers injured at Troy. By the time of Hippocrates, 460-377 BCE, Asclepius had been elevated to godhood, the descendant of the god Apollo and the mortal Coronis.

There were many Asclepeions, healing temples, throughout ancient Greece and the subsequent Hellenistic and Roman cultures. However, the one on Kos was the most significant one. By the time of the Byzantine destruction of non-Christian shrines, the Kos Asclepeion had been long abandoned, overgrown, and buried by blown-in soil.

Asclepeions contained carefully designed and controlled spaces conducive to healing. Treatment at the temple focused on promoting healthy lifestyles, with a special emphasis on the patient's spiritual needs.

This included incubation, a religious practice of sleeping in a sacred space in the hope of experiencing a divinely inspired dream that explained a cure. At Kos one hoped that Asclepius himself or one of his healing children would visit the patient in a dream, relating what they needed to do to cure their ailment.

A patient seeking admission into the Asclepeion first went through katharsis, or purification — cleansing baths, purgatives, and a cleansing diet, for several days. Meditation and chanting could help transition the patient into a hypnotic state.

Case histories describe opening abdominal abscesses, and post-trauma removal of foreign objects. These may have occurred with the patient in a dream-like state of induced sleep called έγκοίμησις or enkoimesis, a state similar to anesthesia, induced with the help of opium.

The Asclepion was in use until 540 AD, so with 940 years of sick people the Asclepion toilets saw a lot of use....