Toilet Gods and Demons in Japan

There is only very limited livestock on Japan farms. Human waste has traditionally been collected in cesspits and used as fertilizer. This meant that there was a risk of falling into a cesspit and possibly drowning. Protection was needed against this dreadful fate. Also, since the collected waste was used for fertilizer, the toilet was connected with fertility in general.

The specific name and rituals associated with the toilet god vary with location. The name is Takagamisama around Nagano, Setchinsan in Hiroshima, Kamu-taka on Ishigaki Island, Sechinbisan in Ōita, and Usshimasama in Ehime. In some places the family sit in front of the toilet on a straw mat and eat a rice cake, in other places they would put an offering of food into the toilet.

In far northern Japan the Ainu people believed that their toilet god, the Rukar Kamuy, would be the first deity to provide help in times of danger. The Rukar Kamuy is one of many Kamuy or household gods. There is Apasamn Kamuy the husband and wife god and goddess who keep evil spirits out of the house entrance. Cisepannokianpa Kamuy and Cisepennokianpa Kamuy, the husband and wife god and goddess of the eaves of the roof, protect the house from earthquakes and typhoons. Cisekor Kamuy, a male god, sits in the east corner of the house and watches over everything. He is the husband of Apehuci Kamuy, the goddess of fire. Colpep Kamuy is the god of containers, thanks are given to this god when containers are retired.

Some branches of Buddhism believe in Ucchuṣma, a god of the latrine who destroys defilement. In Zen monasteries with a belief in Ucchuṣma, the latrine, the bath, and the meditation hall are the three sanmokudō or "silent places" for contemplation.

Japanese folklore describes many yōkai, or demons or imps. Many of these are associated with water. Shintō has many Suijin or 水神, or water deities. Japanese Buddhism describes a type of hungry ogre.

One that we're interested in is the Kappa or 河童, the River Child.

The precise description of the Kappa varies from location to location, but the common features are a shell and beak similar to a turtle plus the sura or plate, a dish-like area holding water on top of the head. The sura always holds water and is the Kappa's source of power. If the sura is emptied while away from water, the Kappa loses its power and may die.

Below is a depiction of twelve forms of Kappa. 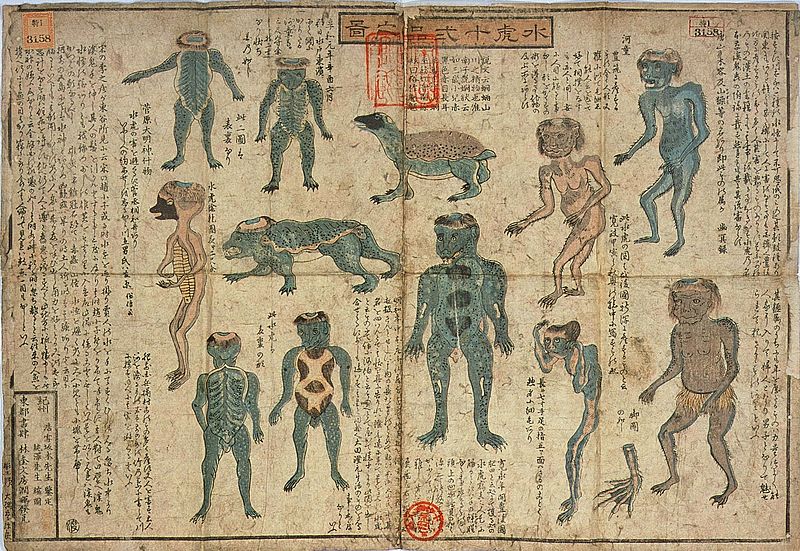 Illustrated Guide to 12 Types of Kappa, mid-19th-century Suiko juni-hin no zu, from Wikipedia.

The Kappa goes by many names. It's also known as the Kawatorō or 川太郎, or the Komahiki or 駒引, or the Kawako or 川虎, literally river tiger. Regions have their own names, with Kappa being a generic term for what are known by dozens of local names. An equivalent is known in Chinese folklore as Shui Gui or 水鬼, "Water Ghost".

The Kappa is a trickster figure. Some of what they are said to do is merely mischievous, such as looking up women's kimonos. But they are credited with drowning people and animals (especially horses and cattle), raping women, and kidnapping children. They are said to sometimes drink blood and eat human flesh, especially the liver.

That leads to their toilet-related lore: The Kappa is said to climb up inside the anus of a person using the toilet in order to eat or steal their liver or the shirikodama, a ball inside the anus said to contain the soul.

All is not lost if you encounter a Kappa, as long as you remember that they are obsessed with politeness. Bow to the Kappa and it will be obligated to return the gesture. That spills the water out of its sura on top of its head, rendering it unable to move. Refill the sura, and the Kappa will serve you forever.

Another thing to try would be to bribe the Kappa with food — eggplant, soba buckwheat noodles, or its favorite, cucumbers. People sometimes write their names, or their children's names, onto cucumbers and toss them into water believed to be infested with Kappas in order to safely swim or bathe. In some regions, eating cucumbers is thought to be a defense against the Kappa, but in others it is thought to be suicidal, turning yourself into what a Kappa would see as a tasty cucumber-filled treat. Related to this, the kappamaki is a sushi roll filled with cucumber. 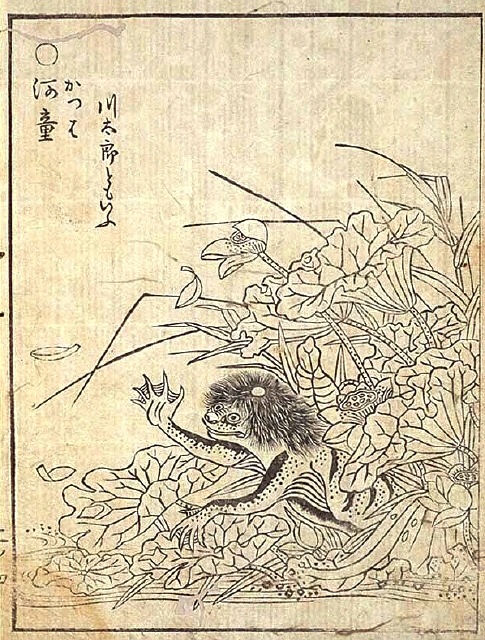 Kappa depicted by Toriyama Sekien (1712-1788), a scholar and artist of Japanese folklore. His Hyakki Yagyō series was an attempt to catalog all forms of yōkai. From Wikipedia. 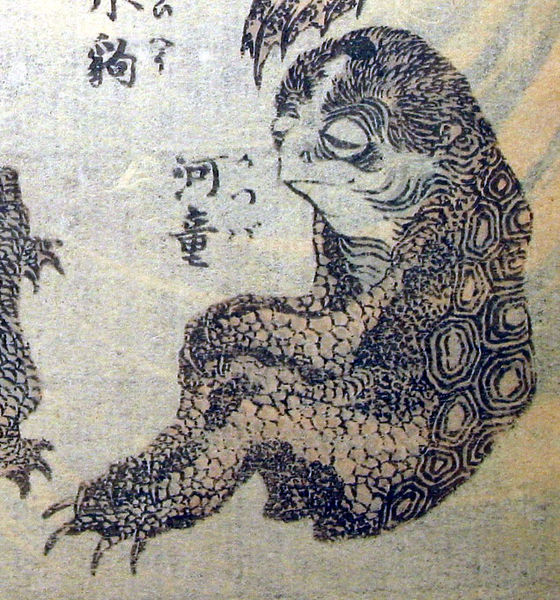 Kappa depicted by Katsushika Hokusai (1760-1849), best known for his print series 富嶽三十六景 or Thirty-six Views of Mount Fuji. From Wikipedia.

Once you have obligated a Kappa into being your life-long assistant, they can be very helpful with water-related tasks.

They can bring fish, and help farmers to irrigate their fields.

Kappas are also believed to be very knowledgable about human medicine, and to have provided the first explanation of how to set broken bones. And maybe they can help to sell kitchen equipment, because...

Kappabashi-dori in Tokyo, also known as Kitchen Town, is a district in Tokyo between Ueno and Asakusa. The area has over 170 restaurant supply shops offering kitchen equipment, furniture, lights and more. The concentration of specialized shops began in 1912.

Kappa can refer to the water demon, but it also means "raincoat". One theory is that residents would hang their kappa or raincoats on the local bridge railing to dry them.

Another is that it was named for a local merchant named Kihachi Kappaya. He funded the project of excavating Shinhori-kawa (or the Shinhori River) to manage and drain water into the nearby Sumida-gawa (or Sumida River). The river is now mostly buried underground.

Whatever the reason, the local merchants adopted the mythical Kappa as a mascot. There are Kappa statues along the street, and Kappa cartoon faces on banners. 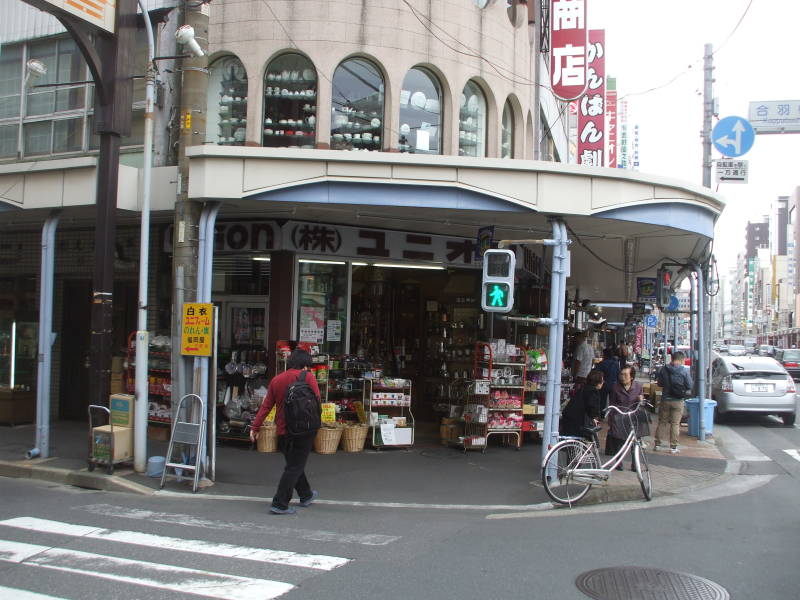 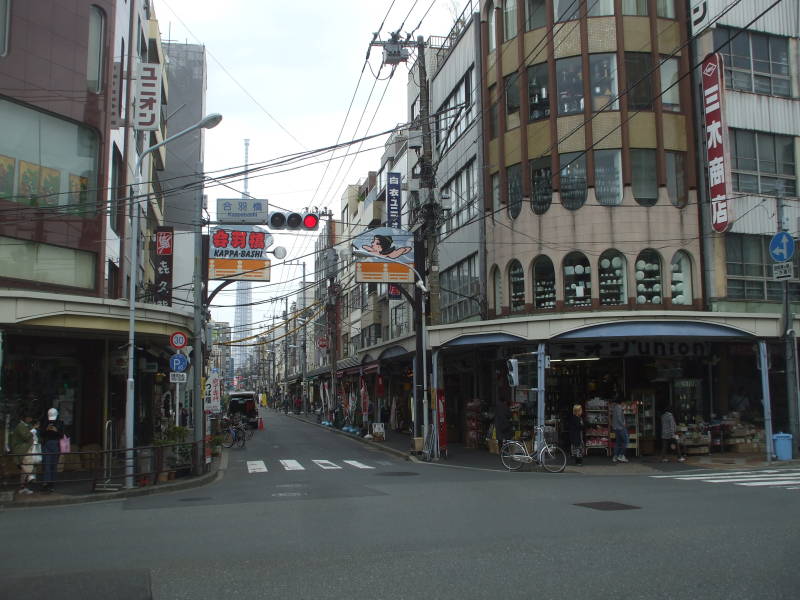 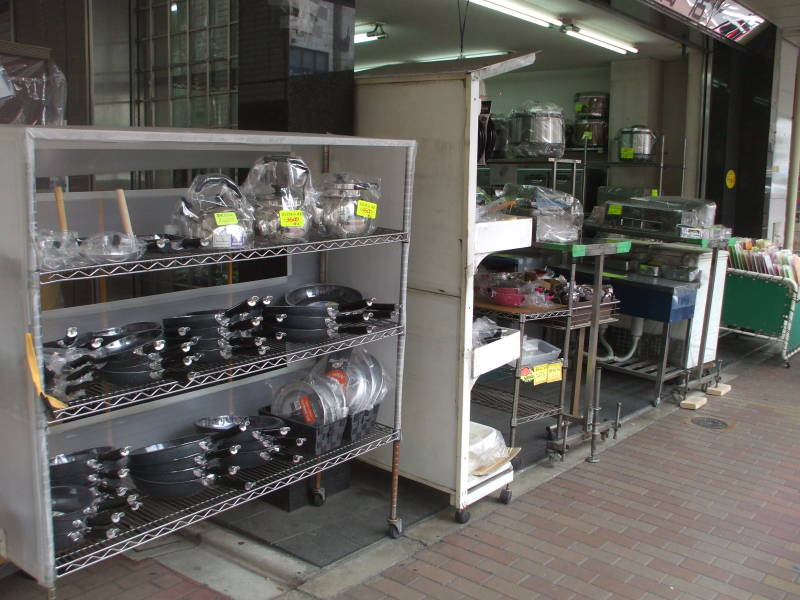 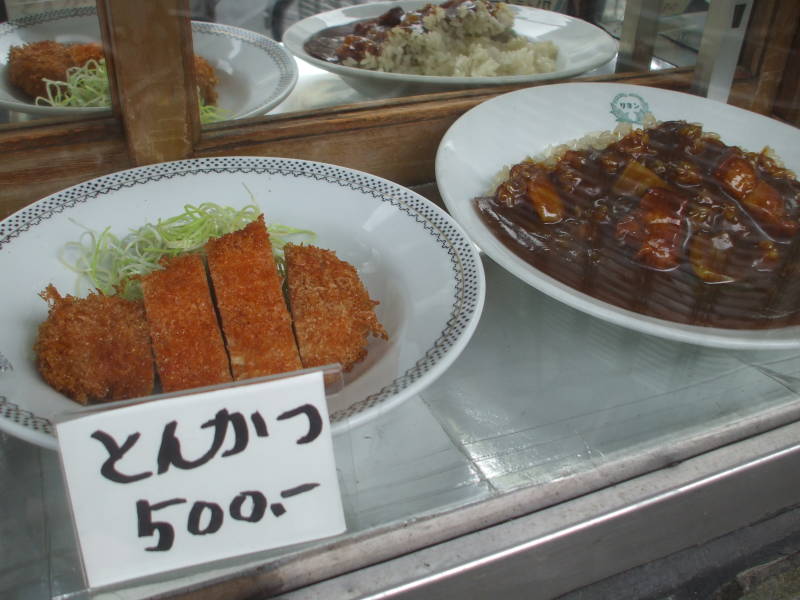 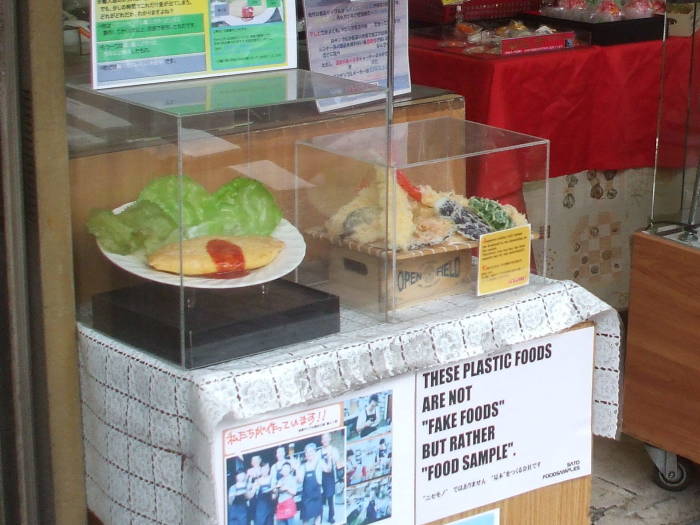 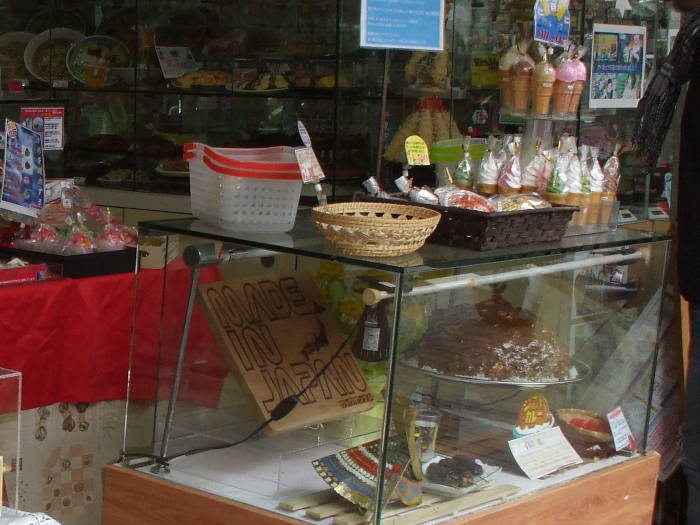 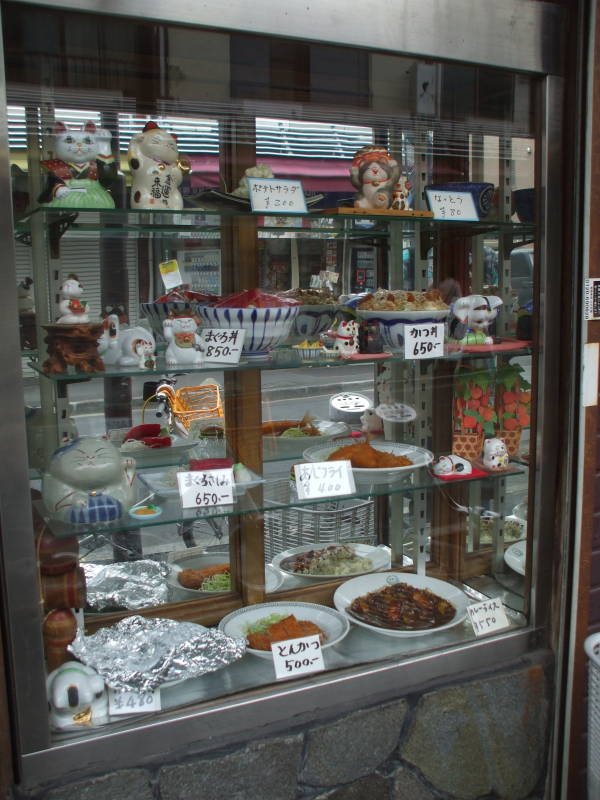 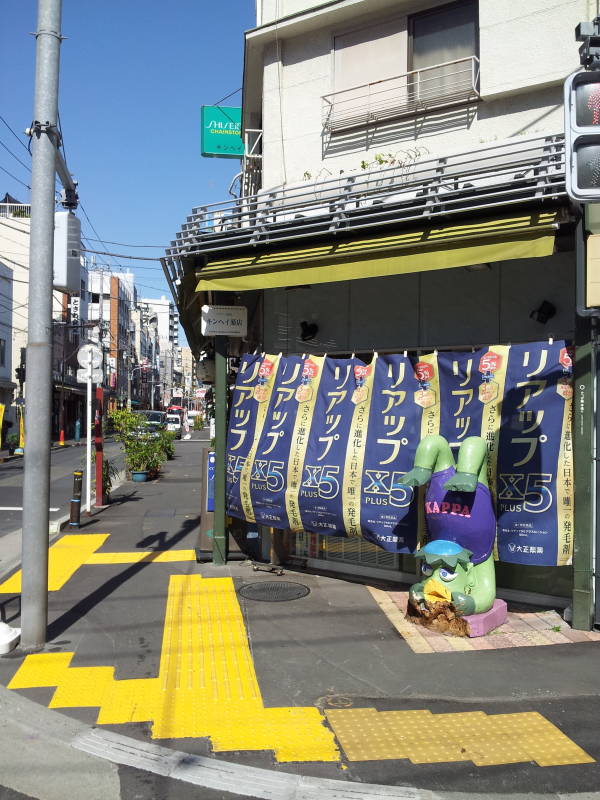 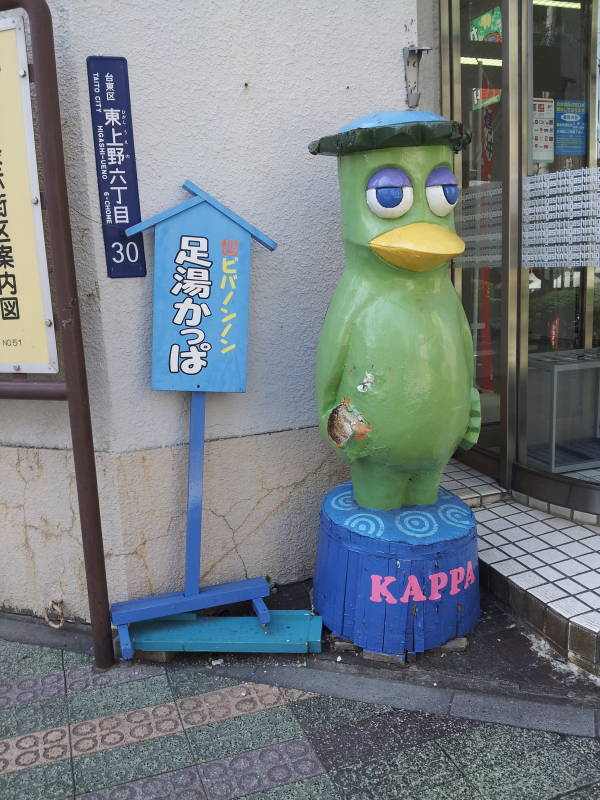 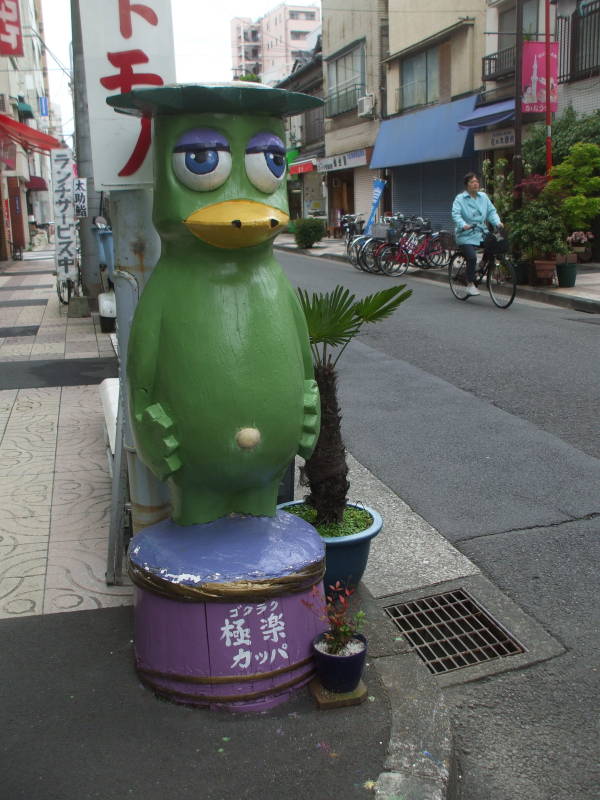 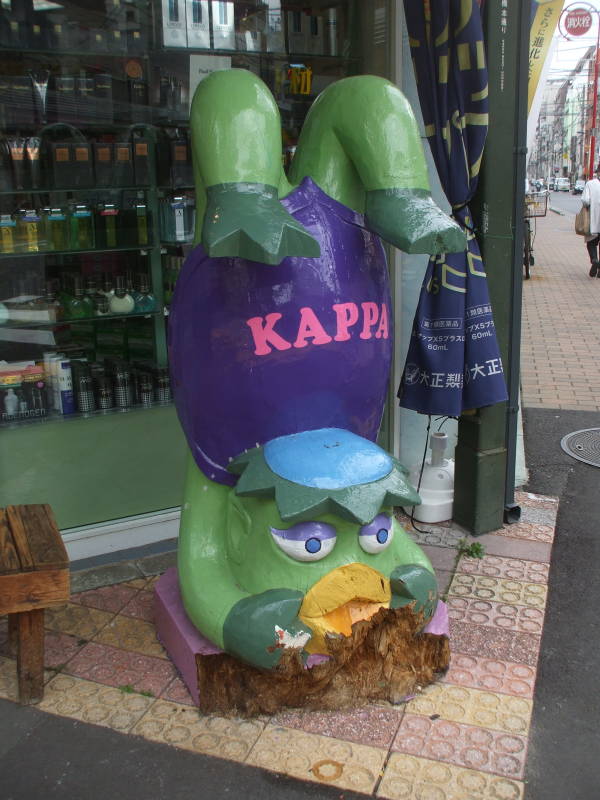 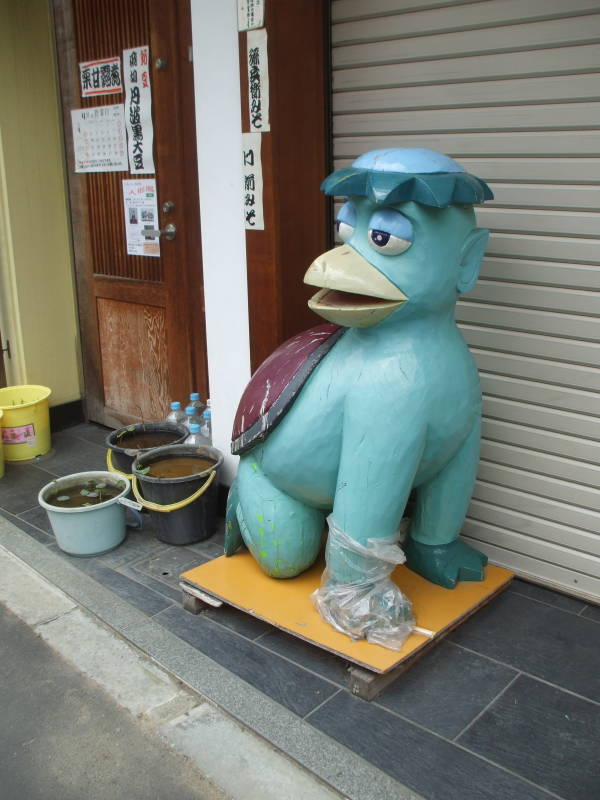 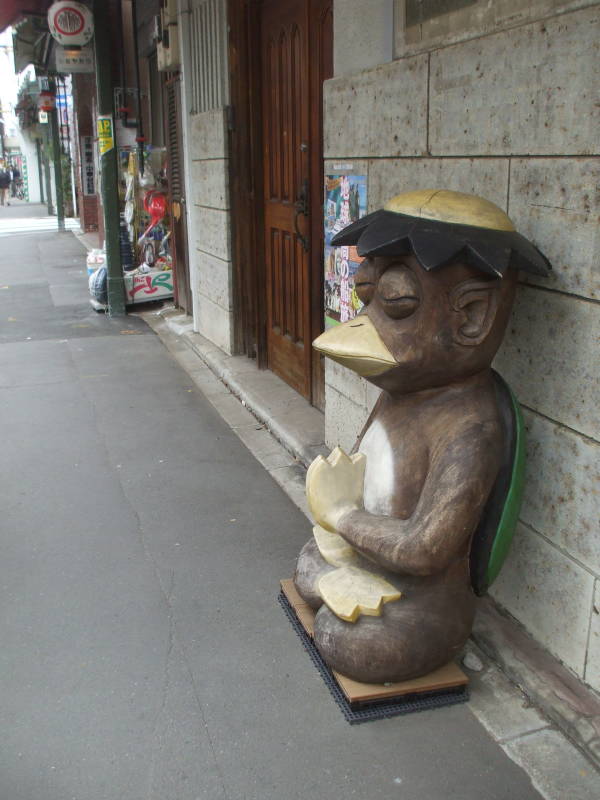 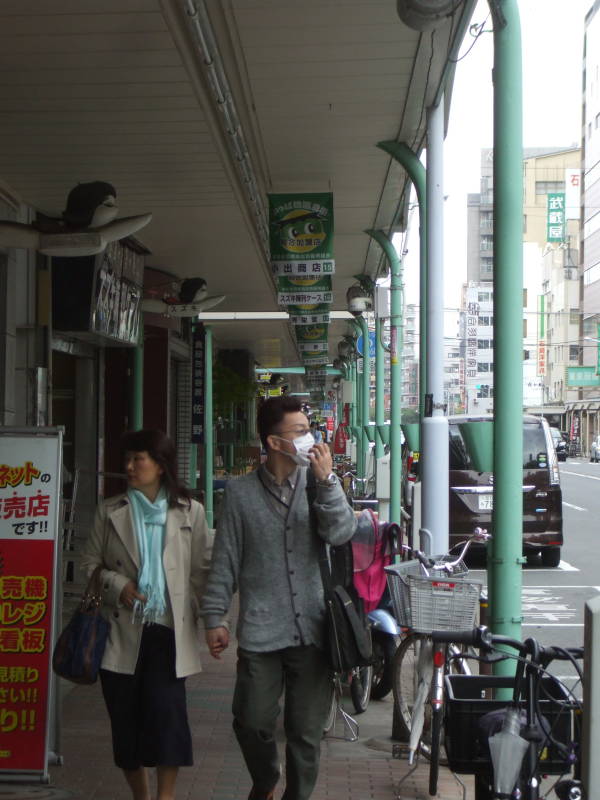 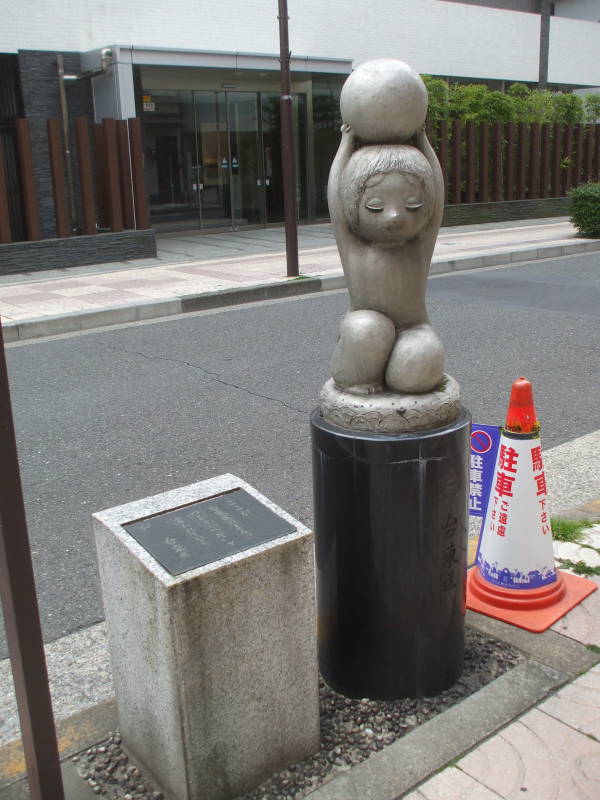 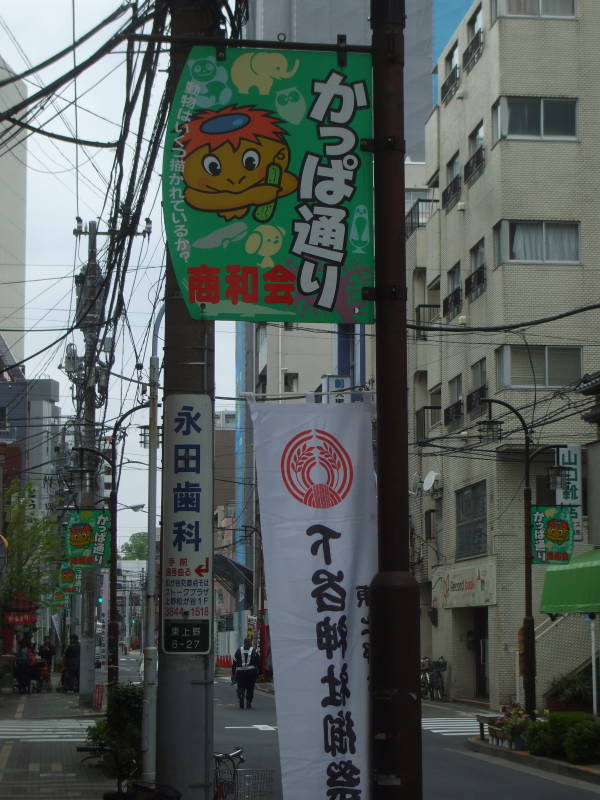 There is a similar Kitchen Town section in Osaka, near Osaka Namba Station. Kitchen equipment, replica food, furniture and signage, etc. But no Kappa statues. 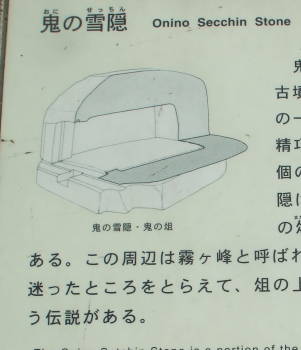 People in Japan built megalithic tombs until the arrival of Buddhism in the 700s. Asuka was the Imperial capital of Japan 538—710 CE.

The ruins of a tomb on a hillside near Asuka were old enough to have been forgotten by the medieval era. The ruined tomb became the source of a confused legend. Originally the tomb had been a flat base stone with a cup-like stone inverted on top of it. The assembly had then been buried under an earthen mound.

The local people came up with a legend about these two stones.

A nearby mountain was Kirigamine, "Mist Peak". The legend said that demons lived in the area. They would cause a mist to descend. Travellers would become confused and disoriented, and the demons would capture them. 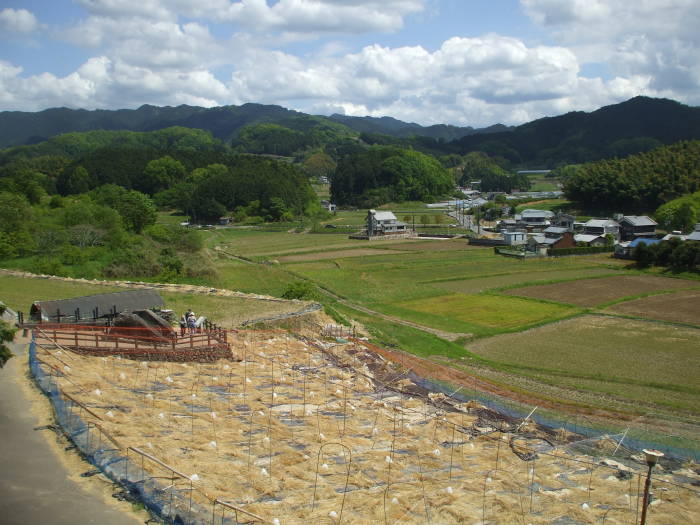 Approaching Onino Setchin with the Misty Mountains in the distance. 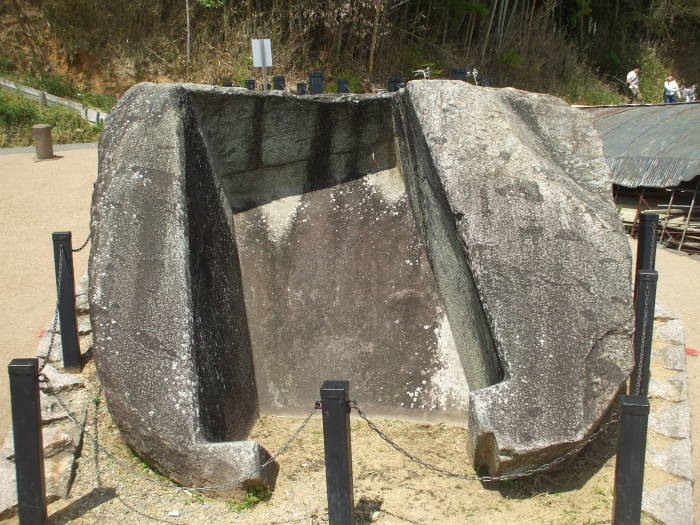 Onino Setchin, a megalithic tomb cover. The two flat areas at left and right rested on the flat base stone. The rectangular volume at center was the tomb. The entryway is at the bottom here. 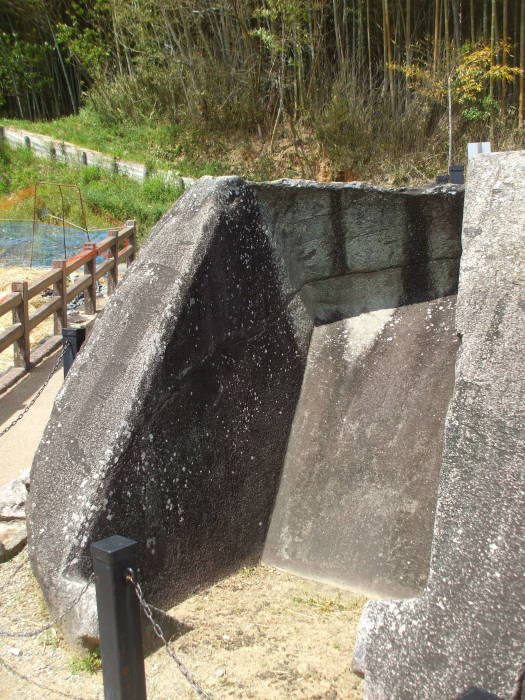 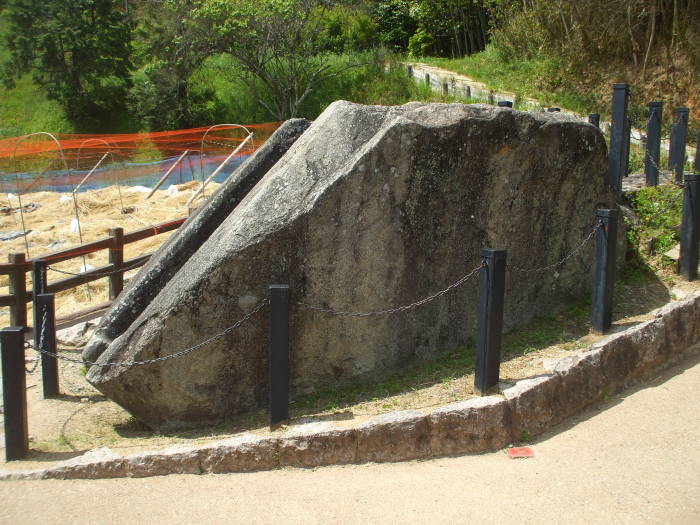 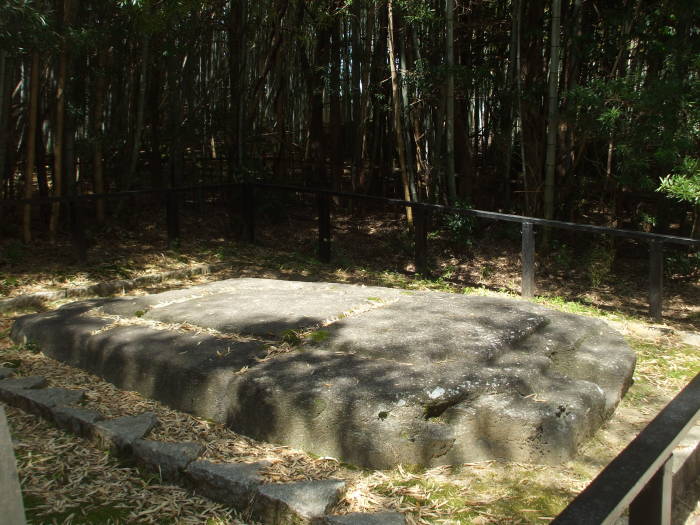 Onino Manaita or "Demon's Cutting Board".