The city of Rome is filled with ruins. Below is an example of an entire block that has been recently excavated. This is the block between Largo di Torre Argentina and Via Florida on the north and south, respectively, and Via di Torre Argentina and Via San Nicola da' Cesarini on the west and east, respectively. This is the view looking north from Via Florida.

The wide steps to the left are remains of a temple probably dedicated to Feronia, an ancient Italic goddess of the harvest. Just beyond that temple are remains of the central exedra of Pompey's portico.

An exedra is a semicircular recess often topped with a semi-dome and set into a building's façade. In the original Greek sense, an εξέδρα (or exedra) was a room opening onto an open στοα (or stoa) with a semi-circular high-back stone bench, a place where one might have a philosophical conversation.

Just beyond the center of the area shown here are the remains of the Statio Aquarum or the Office of the Department of Water Distribution. 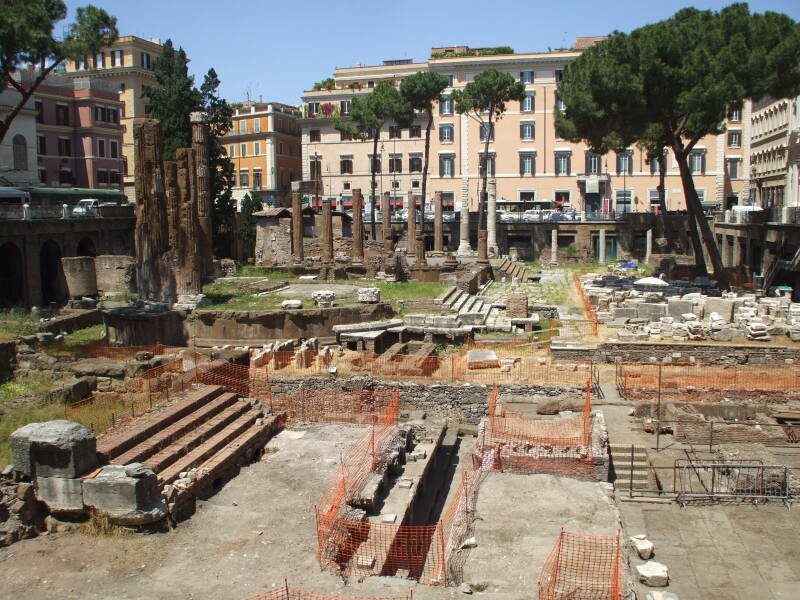 Pompey, more formally known as Gnaeus Pompeius Magnus, lived 106-48 BC. He was a military and political leader of the late Roman Republic. He was initially an ally to Julius Caesar, and joined Caesar and Marcus Licinius Crassus in the First Triumvirate which dominated military and political developments in the late Roman Republic. After the death of Crassus, Pompey and Caesar fought for leadership in Caesar's civil war, with Pompey on the side of the conservative and aristocratic faction of the Roman Senate. He was defeated by Caesar in the battle of Pharsalus, sought refuge in Egypt, and was then assassinated.

Pompey's portico was used as the Senate house. The Senate met there, and it was where Julius Caesar was assassinated on 15 March 44 BC.

A large public toilet is found in the northwest corner of this excavated block. This would have been the toilet used when the Roman Senate took a bathroom break, since the Senate met in the building adjacent to the south side of this large latrine. 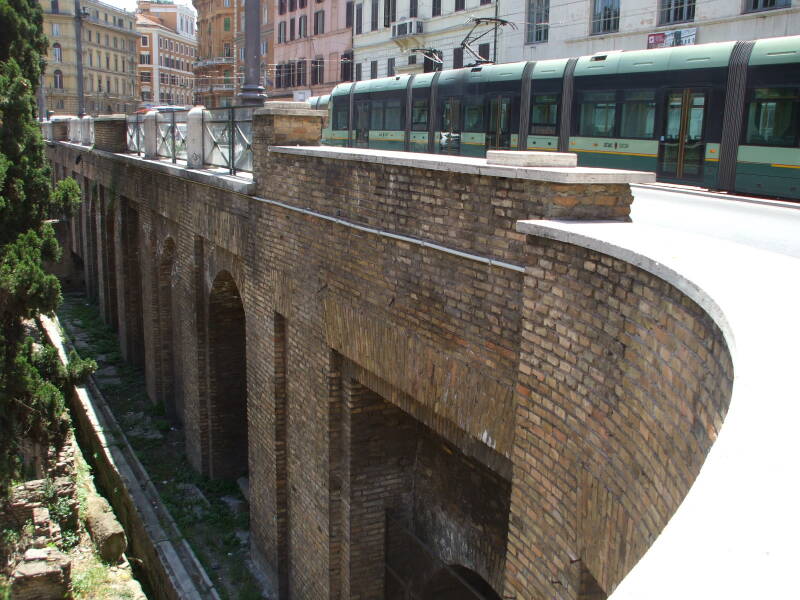 In the picture above you see the tram that runs south on Via di Torre Argentina. Along the base of the wall you see the drainage line for the public latrines. Pompey's portico and the Senate meeting hall is hidden by the trees to the left.

The anthropologist Ann Olga Koloski-Ostrow wrote The Archaeology of Sanitation in Roman Italy: Toilets, Sewers, and Water Systems. In it she explains that the Roman used different words. A latrina was a private toilet, built within a home and emptying into a cesspit. A forica was a public restroom, referring more to the overall facility than to individual seats or toilets. The foricae were often attached to public baths, flushed with water flowing from the baths. 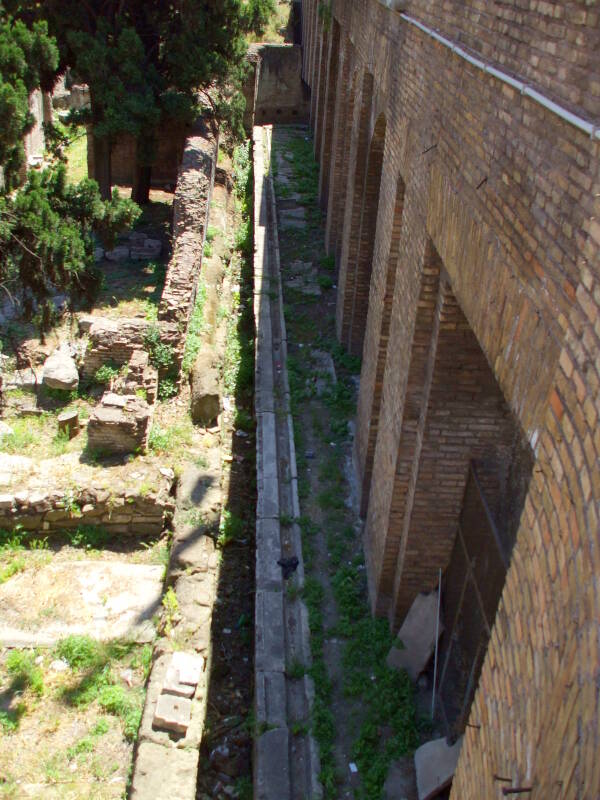 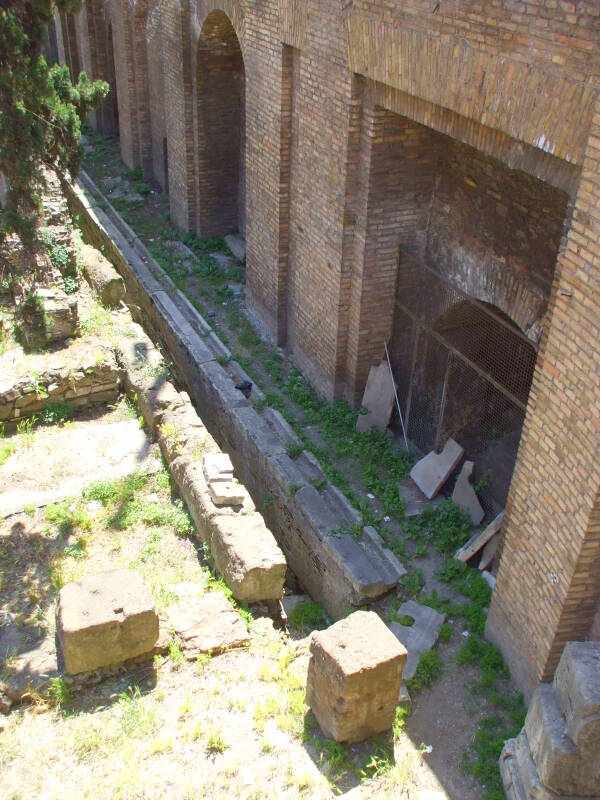 A long row of seats, now missing, would have been directly over the large channel. Users would have been seated facing toward our right in this view, or toward the more recent brick wall, so they could bend forward and dip water from the shallow channel running past their feet.

Once the waste had dropped a meter or more into the channel running below this long row of seats, what happened to it?

Cloacina, Roman
Goddess of the Sewer

It was carried toward the Cloaca Maxima, originally built as an open-air canal by the Etruscans. Tradition says that it was started around 600 BC under the order of Tarquinius Priscus, the king of Rome, to drain the lowlands of Rome after a large flood. He is also credited with building the Circus Maximus and a wall around the city.

The original Cloaca Maxima was later built over and enclosed. Later sections may have been originally built by tunneling. It collected water from streams from three surrounding hills and channeled these through the main Forum and emptied into the Tiber river. 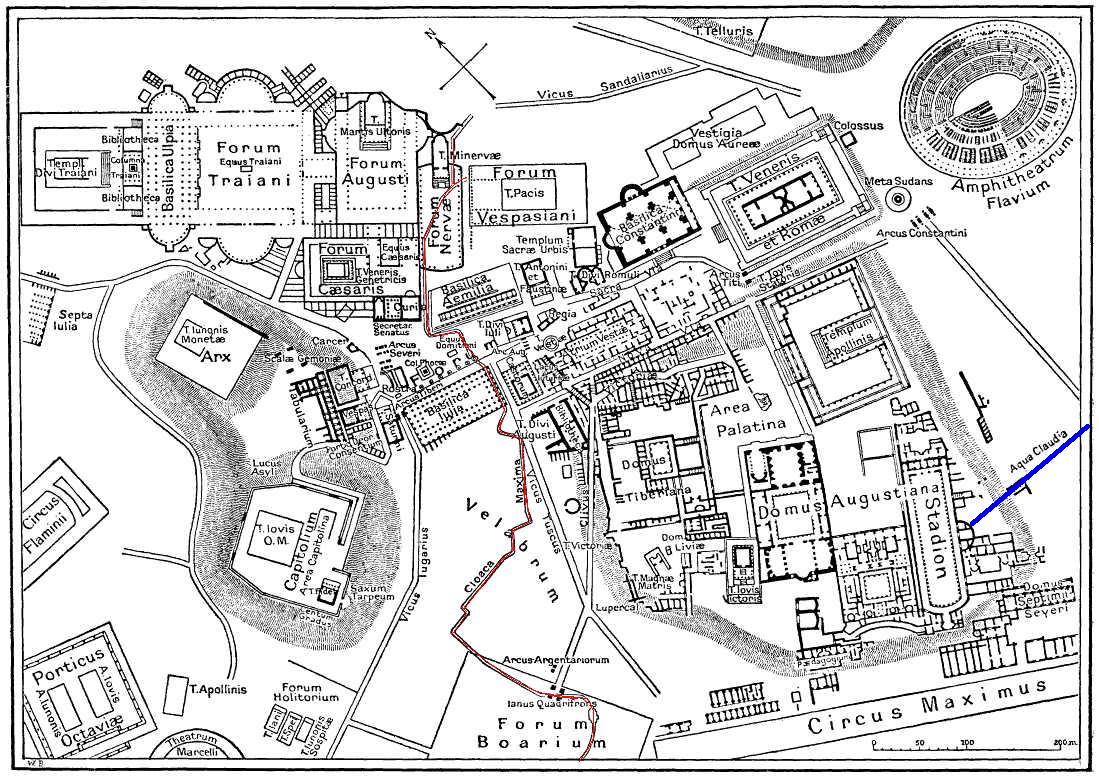 Eleven aqueducts were supplying water to Rome by the 1st century AD. The best water supplies were used for drinking and cooking, second-best for baths and fountains. The remaining supply from the aqueducts as well as the outflow of used water was channeled into the sewers in an attempt to remove waste and prevent obstructions.

Public toilets were connected to the sewers, while private ones, even in wealthy homes, were on cess pits that would require periodic cleaning.

The Cloaca Maxima emptied into the Tiber, near today's Ponte Rotto and Ponte Palatino. Christoffer Wilhelm Eckersberg painted a scene in 1814 including one of its outflows. 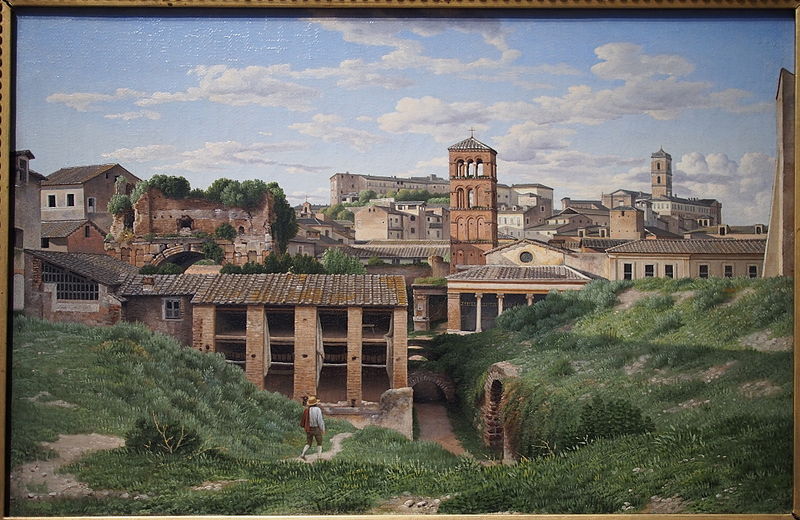 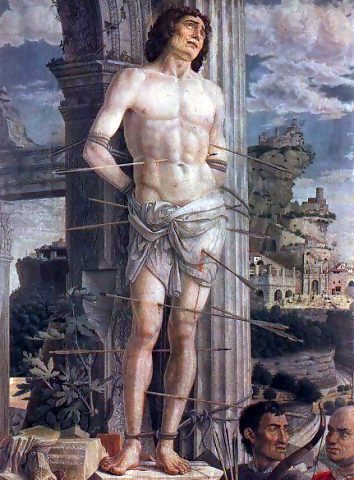 The Romans are said to have thrown the bodies of some people into the sewer rather than give them a proper burial. The legend of the martyrdom of Saint Sebastian says that in 286 AD the Emperor Diocletian had him tied to a stake and shot by archers from Mauritania, "And the archers shot at him till he was as full of arrows as an urchin," then left for dead.

Sebastian miraculously survived and was nursed back to health. Diocletian was surprised to find himself once again being harangued by a man he thought was dead. This time he ordered that Sebastian be beat to death by cudgels, which worked (although the scene with all the arrows is the popular one with artists).

Once dead, his body was thrown into the Cloaca Maxima. A pious lady had a dream of being admonished by Sebastian, and had his body removed and buried in catacombs at the entrance of the cemetery of Calixtus. Like many saints, his remains have kept busy.

In 826, under Pope Eugenius II, fear of a Saracen attack led to Sebastian's remains being moved to Saint Peter's and the church being destroyed.

The basilica was rebuilt under Pope Nicholas I (858-867), and Sebastian's remains presumably returned. But contemporary authors in France report that Pope Eugenius II gave Sebastian's body to Hilduin, the Abbot of Saint Denys, who brought it to northern France and installed it at Saint Medard Abbey in Soissons.

Sebastian's cranium supposedly ended up in Germany. Around 800 AD Count Sieghart built a church in Ebersberg, now in southern Germany. His son added an Augustinian monastery. Their successor Eberhard I extended the castle in 933, and in 944, built a church dedicated to Saint Sebastian. According to the city's website, Probst Hunfried brought Sebastian's skull to Ebersberg and it became a significant pilgrimage.

John Snow and the
1854 cholera epidemic

One irony is that Sebastian was said to be a defense against the plague. Good sanitation, like the Cloaca Maxima into which Sebastian's body was thrown, is an excellent defense against disease. But the germ theory of disease and the importance of sewers and sanitation didn't become obvious until the 1800s, most notably with the work of Doctor John Snow in London.