A Chamber Pot from Shakespeare's Time

This is not the chamber pot of William Shakespeare. It isn't The Bard's own thunder mug. However, this is an English chamber pot from approximately 1600, during Shakespeare's life, and it is very much like what he used. The Folger Shakespeare Library in Washington D.C. had a special exhibit on day-to-day life in Shakespeare's time. They didn't have an English chamber pot from England, as chamber pots weren't the sort of family treasure that you carefully kept. This one was found in an archaeological excavation, it was brought from England to the English colony at Jamestown, Virginia. Jamestown was the first permanent English settlement in the Americas. 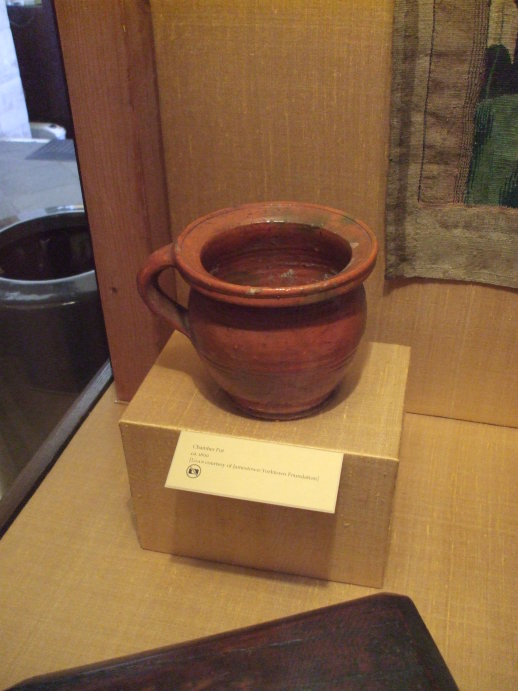 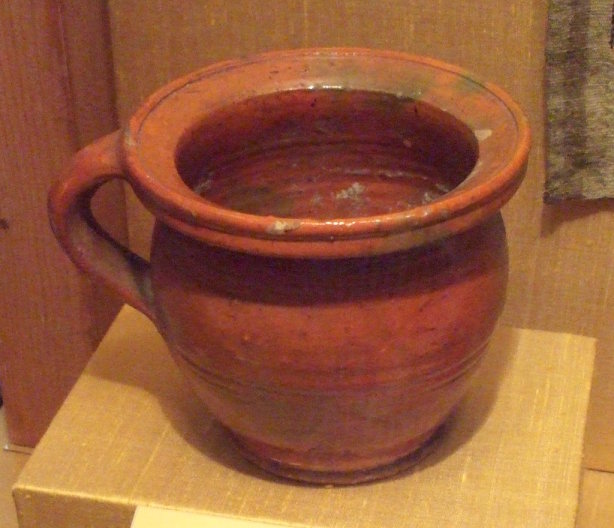 Jamestown was an ongoing disaster. Although, it was less disastrous than some colonies that preceded it, like the Lost Colony of Roanoke.

Shakespeare lived 1564–1616. It seems that several of his plays were on the London stage by 1592. The First Folio, containing all but two of his plays, was published in 1623.

Jamestown was established in 1607 by the Virginia Company of London, briefly abandoned in 1610, and then went on to serve as the capital of the colony of Virginia for 83 years, from 1616 until 1699, at which point it was rapidly abandoned and it decayed.

The location was chosen for being a defensible point on water navigable by the ships of the era. It was uninhabited by the local natives because they knew better. Jamestown was located in what was called Tsenacommacah and spelled in widely varying ways in Roman characters — Tsenacomoco, Tscenocomoco, Tenakomakah, Attanoughkomouck, and Attan-Akamik were all used.

The name meant "densely inhabited land" in the language of the Powhatan Confederacy. It refered to an area of land about 100 miles on a side. Its southern boundary was the south bank of the Powhatan River (which the English called the "James River" after their King James I), and the northern boundary was the mouth of the Potomac River (for which the English kept the original Algonquian name). It extended from the Atlantic coastline inland to about the fall line of the rivers. The confederacy was based near the present-day city of Richmond, and it was led by Wahunsenacawh, popularly known as Chief Powhatan. The Paspahegh tribe were members of the confederacy, living the closest to the English settlement.

Jamestown was swampy, largely isolated from the surrounding land, plagued by mosquitos, and had only brackish tidal river water that was not suitable for drinking. The colonists compounded their poor choice by arriving too late in the year to establish any crops, not that any would have grown well there had they arrived earlier. And who was to do the agriculture anyway, with a large fraction of their party ranking gentlemen and their manservants, all unaccustomed to the hard labor of building a colony and establishing farming.

Anyway, arrive they did, with English lavatorial hardware like this chamber pot.

This would be just the thing to keep in your bedroom, sitting on the floor right next to or below your bed. Then you could save, well, whatever, overnight in the pot. And then fling the contents out the window in the morning.

Europeans were amazed when they first came to Central and South America and found huge cities without open sewage running down all the streets.

Back home in Europe, the streets were basically open sewers. Pedestrians were regularly hit by chamber pot contents being thrown out of overhead windows. The Romans had built sophisticated water supply systems and decent sanitation systems to remove sewage and other waste. But with the long decline and disappearance of Roman culture, sanitation in Europe went from primitive to largely non-existent.

Sanitation and Public Health in the Americas

The Powhatan Confederacy initially welcomed and helped the fairly inept English settlers with gifts of food and assistance raising and gathering their own. But relations quickly turned bad, and warfare and disease had annihilated the Paspahegh tribe within three years. The almost complete lack of sanitation at Jamestown must have played a role in this.

Then starvation and disease began killing off the English, with over 80% of them dying during the "Starving Time" of 1609-1610.

Meanwhile the Virginia Company had brought eight Polish, Slovak, and German settlers to the colony in 1608. A few of them built a small glass factory, but all the Germans and a few of the rest decided their chances were better with the natives and defected with weapons and supplies.

In 1619 the English had captured a Portuguese slave ship in the West Indies, and brought all 50 of the men, women, and children — the first documented African slaves in the English-controlled mainland.

The Folger Library and Shakespeare

This chamber pot was in a special exhibit at the Folger Library in Washington DC, which is just behind the Library of Congress and within a block of the U.S. Capitol and the Supreme Court. The Folger is dedicated to Shakespeare, his works, and the world he inhabited. Chamber pots and all. 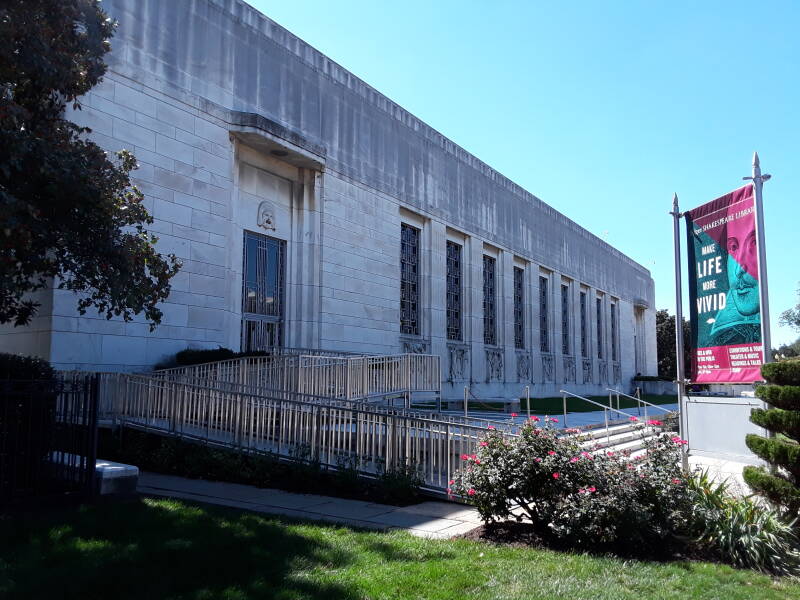 While the Library of Congress is adjacent on two sides, the Folger is a privately founded independent research library now administered by Amherst College. About 750 copies of Shakespeare's First Folio were printed in 1623. It contains 36 of his 38 plays, all but Pericles, Prince of Tyre and The Two Noble Kinsmen, and is the only reliable text for about twenty of them. 235 copies of the First Folio are known to still exist. The Folger holds 82 examples of the First Folio, far more than any other collection. The second and third largest collections are at Meisei University in Tokyo (12) and the British Library (5).

The original price was £1, equivalent to about £95-£110 today. The few original folios would bring a few million to maybe fifteen million pounds today. The prices on modern editions look pretty attractive.

The sanitary ware of the period appears several times in Shakespeare's work. In Henry IV, Part 2, Act 1, Scene 2, Falstaff has had a physician examine his urine.

Enter FALSTAFF, with his PAGE bearing his sword and buckler (and chamber pot)

FALSTAFF: Sirrah, you giant, what says the doctor of my water?

PAGE: He said, sir, the water itself was a good healthy water, but, for the party that owed it, he might have more diseases than he knew for.

Uroscopy, the vague analysis of "casting the water", meant visual examination of urine. It was less smelly than coproscopy, looking at feces, and less intrusive (and infection-prone) than hematoscopy, looking at blood.

A matula is a glass vessel for examining urine. 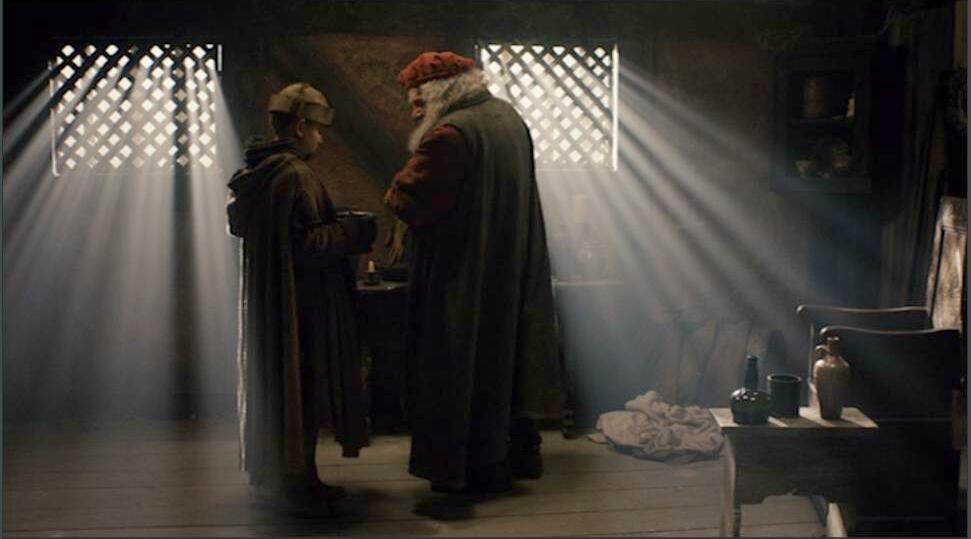 Falstaff and his page with Falstaff's chamberpot and urine, from The Hollow Crown. The makers of the miniseries had the page bring the urine back, instead of simply relaying the results.

The 1995 film of Richard III stars Ian McKellen as Richard, and Robert Downey Jr as Anthony Woodville, 2nd Earl Rivers. It's based on a stage production which also starred McKellen. Both the play and movie are set in an alternative 1930s Britain with Richard as a fascist.

The movie begins with events from the end of Henry VI Part 3, Richard's murder of Henry VI and his son Edward. Richard's opening soliloquy doesn't begin until about 00:09:30 into the movie, where it is an after-dinner toast to the newly crowned King Edward and the other gathered characters.

Then he breaks off after line 11 and retreats to the lavatory, where he delivers lines 12-31 (interpolated with some lines from 3 Henry VI) at a row of large 1930s urinals and at the sinks. The urinals are flushed by a pull-chain from an overhead tank. The lavatory scene is from 00:10:35 to 00:12:04.

He capers nimbly in a lady's chamber
To the lasicious pleasing of a lute.
But I, that am not shaped for sportive tricks,
Nor made to court an amorous looking glass;
I, that am rudely stamped and want love's majesty
To strut before a wanton ambling nymph;
I, that am curtailed of this fair proportion,
Cheated of feature by dissembling nature,
Deformed, unfinished, sent before my time
Into the breathing world scarce half made up,
And that so lamely and unfashionable
That dogs bark at me as I halt by them—
Why, I, in this weak piping time of peace,
Have no delight to pass away the time,
Unless to see my shadow in the sun
And descant on mine own deformity.

And therefore, since I cannot prove a lover
To entertain these fair well-spoken days,
I am determined to prove a villain
And hate the idle pleasures of these days.

There is a knocking at a door. A PORTER opens the door to MACDUFF and LENNOX.

PORTER:
I pray you, remember the porter.

MACDUFF:
Was it so late, friend, ere you went to bed that you do lie so late?

PORTER:
Faith, sir, we were carousing tell the second cock, and drink, sir, is a great provoker of three things.

PORTER:
Marry, sir, nose-painting, sleep, and urine. Lechery, sir, it provokes and unprovokes. The provokes the desire, but it takes away the performance. Therefore much drink may be said to be an equivocator with lechery. It makes him, and it mars him; it sets him on, and it takes him off; it persuades him and dishearens him; makes him stand to and not stand to; in conclusion, equivocates him in a sleep and, giving him the lie, leaves him.

LUCIO:
Some report a sea-maid spawned him; some, that he was begot between two stock-fishes. But it is certain that when he makes water, his urine is congealed ice; that I know to be true. And he is a motion ungenerative; that's infallible.

SECOND CARRIER:
They will allow us ne'er a jordan, and then we will leak in your chimney.

"Jordan" was slang for a chamberpot, said by the Oxford English Dictionary to be medieval. Men commonly urinated into fireplaces in the middle of the night, rather than use the chamberpot.

THE CLOWN:
Foh, pr'ythee stand away. A paper from Fortune's close-stool to give to a nobleman! Look here he comes himself.

The CLOWN is likening the smell of PAROLLES' letter to used toilet paper. The lid of a close-stool would shut and form a stool as a piece of furniture to sit on, but it also closed over the pot filled with fecal matter and made things a little less smelly.

COSTARD [to SIR NATHANIEL]:
O! sir, you have overthrown Alisander the conqueror! You will be scraped out of the painted cloth for this; your lion, that holds his pole-axe sitting on a close-stool, will be given to Ajax: he will be the ninth Worthy. A conqueror, and afeard to speak! Run away for shame, Alisander. [Nathaniel retires.] There, an't shall please you: a foolish mild man; an honest man, look you, and soon dashed! He is a marvellous good neighbour, faith, and a very good bowler; but for Alisander,—alas! you see how 'tis—a little o'erparted. But there are Worthies a-coming will speak their mind in some other sort.

Costard is mangling a description of Alexander the Great's coat of arms, a lion on a throne holding an axe.

THERSITES:
Thou shouldst strike him.

THERSITES:
He would pun thee into shivers with his fist, as a sailor breaks a biscuit.

AJAX:
Thou stool for a witch!

THERSITES:
Ay, do, do; thou sodden-witted lord! Thou hast no more brain than I have in mine elbows; an asinico may tutor thee. You scurvy valiant ass! Thou art here but to thrash Trojans, and thou art bought and sold among those of any wit like a barbarian slave. If thou use to beat me, I will begin at thy heel and tell what thou art by inches, thou thing of no bowels, thou!

Thersites is punning on Ajax's name being a slang term for a jakes or toilet, as described in the history of the flush toilet. "Stool for a witch" refers to a witch's close-stool or toilet.

At the Folger Shakespeare Library

The public restrooms are one floor directly below the theatre and ticket office. 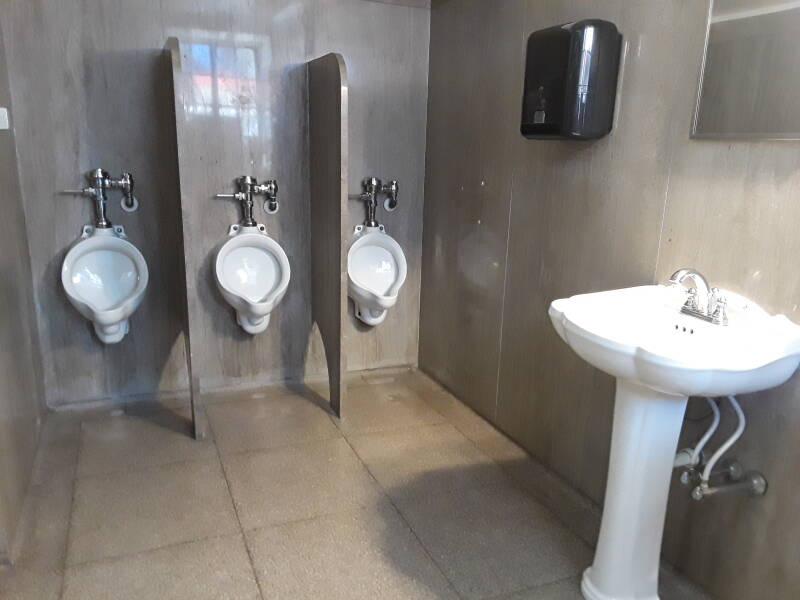 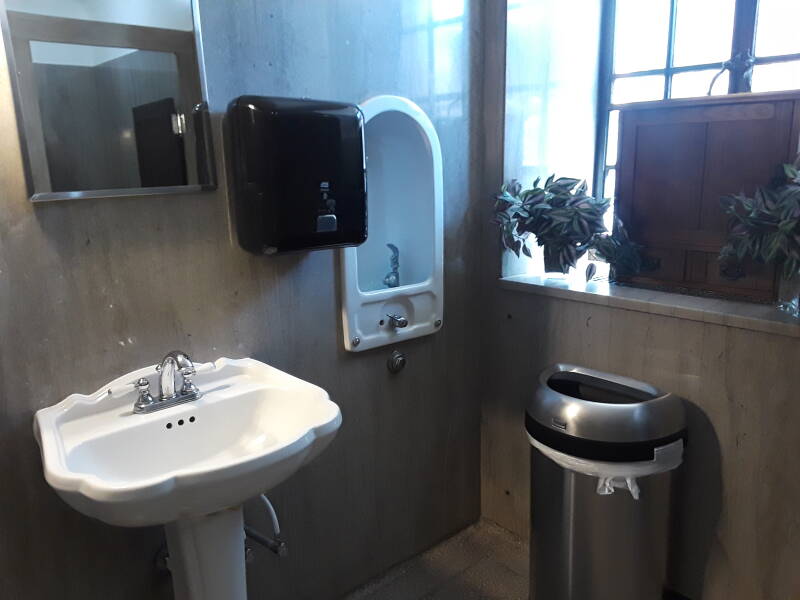