Serially bankrupt casino operator and former reality television figure Donald Trump became US President after losing the popular vote by 2.1%, 2,868,686 votes, but winning the electoral vote. So, with what the U.S. government's intelligence agencies concluded was assistance from the Russian government, Trump was President.

Trump, whose father was arrested after participating in a Ku Klux Klan march, and who has a long history of racial discrimination, decorates his palace-like homes in the style of dictators Saddam Hussein and Muammar Gaddafi. Gold (or at least gilding), marble, and over-the-top kitsch. Trump and his third wife, Slovenian nude model Melanija Knavs, who had Germanized her name to Melania Knauss before applying for permanent residency in the U.S., moved into the White House. You can find plenty of pictures of her on the Internet, but including any picture of a naked or even nearly naked woman causes Google to automatically flag a page as offensive. So here are two pictures of Trump supporters instead. Google doesn't care about Nazi flags and salutes.

Earlier in 2016, the artist Maurizio Cattelan had returned from retirement with a special project at the Guggenheim Museum in New York. His America (2016) replaced a toilet in one of the museum's public restrooms with a fully functional toilet cast in solid 18-carat gold. This was his first project since his 2011 retrospective at the Guggenheim and planned retirement. It opened in late September, 2016, with plans to remain there indefinitely. From the museum's description of this piece:

Cattelan's toilet offers a wink to the excesses of the art market, but also evokes the American dream of opportunity for all, its utility ultimately reminding us of the inescapable physical realities of our shared humanity. 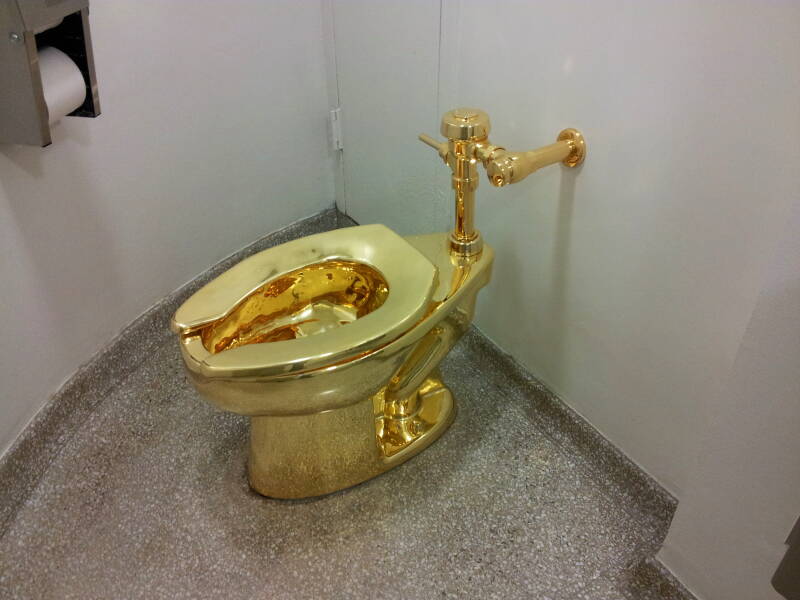 It is an interactive piece, visitors are invited to interact with it "individually and privately". Guggenheim curator Nancy Spector wrote that America "closes the transgressive loop" that Duchamp started with his groundbreaking readymade. As you can see from the blue Sani-Flush border on these pictures, I closed the loop by interacting fully.

You can't easily tell if the water in the bowl of a solid gold toilet contains urine. Not unless there is something seriously wrong with your urine. 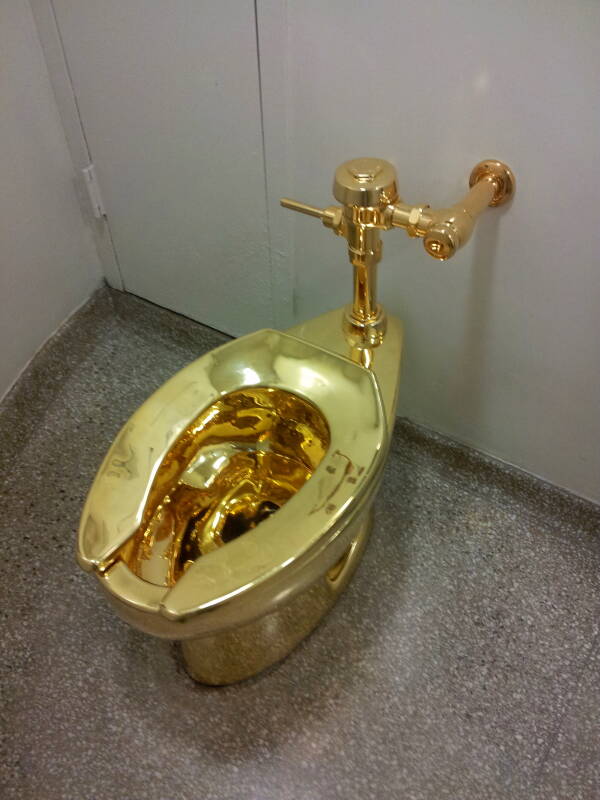 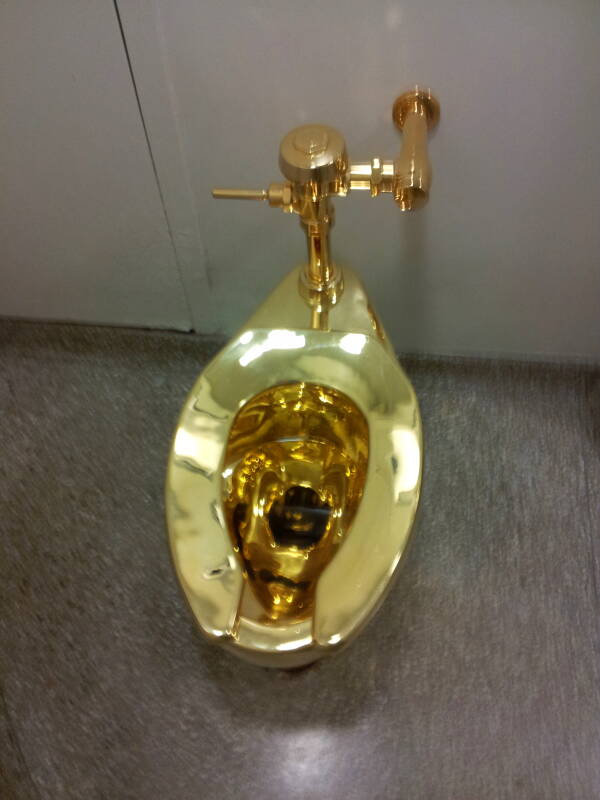 The museum shipped two toilets to Italy. Cattelan used those to cast multiple pieces which he cast in 18-carat gold and welded together. Michael Zall, the Associate Director of Operations at the Guggenheim, oversaw its installation by a professional plumber. The seat is not only quite cold, it is enormously heavy. And it only raises a few inches, so there is no risk of angering the next person in line by leaving the seat up.

Then, in September 2017, a White House spokesperson wrote to the Guggenheim Museum, asking if the Trumps could borrow Landscape With Snow, a Vincent van Gogh painting, to decorate the Presidential residence. Nancy Spector, the Guggenheim's chief curator, responded to Donna Hayashi Smith of the White House Office of the Curator. "I am sorry... to inform you that we are unable to participate in this loan since the painting is part of the museum's Thannhauser Collection, which is prohibited from travel except for the rarest of occasions," Washington Post and New York Times reporter Serge Kovaleski, who suffers from arthrogryposis, a condition which limits the movement of joints, and Trump, who mocks the disabled.

However, the America exhibit had just ended and the golden toilet was available "should the President and First Lady have any interest in installing it in the White House." Cattelan, the artist, had reported that he "would like to offer it to the White House for a long-term loan. It is, of course, extremely valuable and somewhat fragile, but we would provide all the instructions for its installation and care."

The Trumps turned down the offer of the solid gold toilet. It wasn't gaudy enough for them. Stories on this request and counter-offer, and also describing Trump's dictator-like taste in decoration, include these from:
The Washington Post The New York Times The Hill Time BBC News Forbes Newsweek, Dec 2017 Newsweek, Jan 2018

As the Washington Post has reported, U.S. National Archives officials "suspected Trump had possibly violated laws concerning the handling of government documents". According to The New York Times, this included possibly classified material.

The Presidential Records Act requires the U.S. President to preserve written communications concerning his official duties. But it's hard to break habits of covering up your corrupt activity, Trump continued to routinely tear up documents.

He would put torn-up documents into toilets and try to flush them away, because that's what everyone does when they're behaving in a totally ethical way.

Staff at the White House routinely found wads of printed and hand-written material clogging toilets, as described in Confidence Man: The Making of Donald Trump and the Breaking of America. U.S. White House staff photos of government documents Donald Trump tried to destroy and flush away down the toilet. At left: a White House toilet; at right: a foreign toilet photographed on an overseas Presidential trip.

Trump's daughter Ivanka and her husband Jared Kushner rented a home in the elite Kalorama neighborhood of Washington D.C. The house, at 2449 Tracy Place NW, rents for $18,000 per month. With almost 7,300 square feet, it has six bedrooms and seven toilets, six of them sharing a room with a shower or bathtub. Hence "six and a half baths" in American parlance.

The U.S. Secret Service provided Ivanka and Jared with round-the-clock protection whether they were at their Kalorama home or elsewhere.

Ivanka and Jared told their protectors that they were not allowed to use any of the seven toilets in the house.

The Secret Service rented a portable toilet suitable for a construction site, but that was unpopular in the elite neighborhood filled with embassies and consulates. For a while they actually went to the nearby home of former President Barack Obama and used the Obamas' toilet.

Eventually the Secret Service found and rented a basement studio apartment with a toilet. It's in Kalorama, the rent was $3,000 per month.

This is perfectly in character with the Trump family. Trump routinely billed the U.S. Secret Service for hotel rooms and other charges in properties he owned for the men and women protecting him and his family during the many trips during his Presidency. The Trumps went on twelve times as many protected trips as the Obama family, during half the time in office. Much of the Trump travel was to promote Trump Organization businesses, paid for by US taxpayers.

In one of his last acts in office, Trump extended Secret Service protection for his adult children and other family members for an additional six months. Given their lavish lifestyles, this will cost several million dollars.

The GOP says it's the party of fiscal responsibility.

Several of the pro-Trump rioters who stormed the U.S. Capitol on January 6, 2021, smeared their feces in multiple hallways and offices. They also urinated in Senate and Congressional offices. In response to the insurrection, Trump posted video to Twitter saying "We love you". Several news outlets reported the poop-smearing and pee-spraying:

One of the idiots posted on Facebook that he had urinated in House Speaker Nancy Pelosi's Congressional office and regretted not having taken a dump on her chair. His friends took screenshots of his posts and turned him in to the FBI. They arrested him and charged him with a variety of offenses. This seems to be a GOP theme. One woman was arrested in Austin, Texas, after spraying a mixture of urine and blood on artwork in the Texas state Capitol.