Woodrow Wilson was the 28th President of the United States, serving from 1913 through 1921. He initially kept the U.S. out of what later came to be known as World War I, but Germany's increasing belligerence forced the U.S. into the war.

Wilson negotiated for the armistice ending World War I, aiming for an equitable peace and statehood for formerly oppressed nations. His famous Fourteen Points address introduced the idea of a League of Nations to preserve territorial integrity and political independence. He was given the 1919 Nobel Peace Prize for his peace-making efforts. 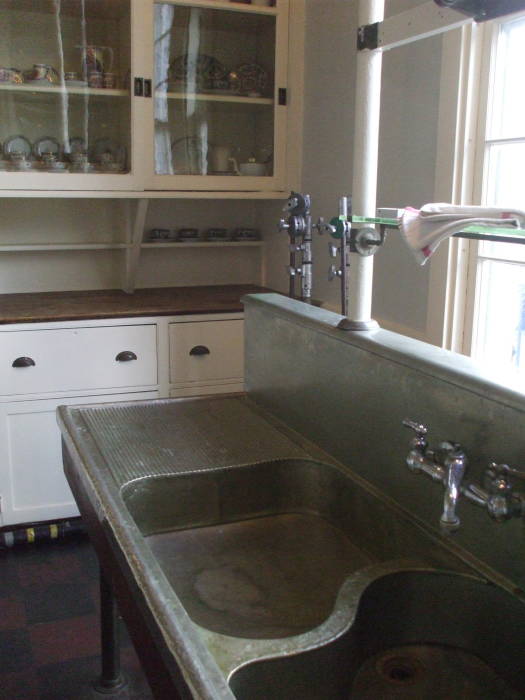 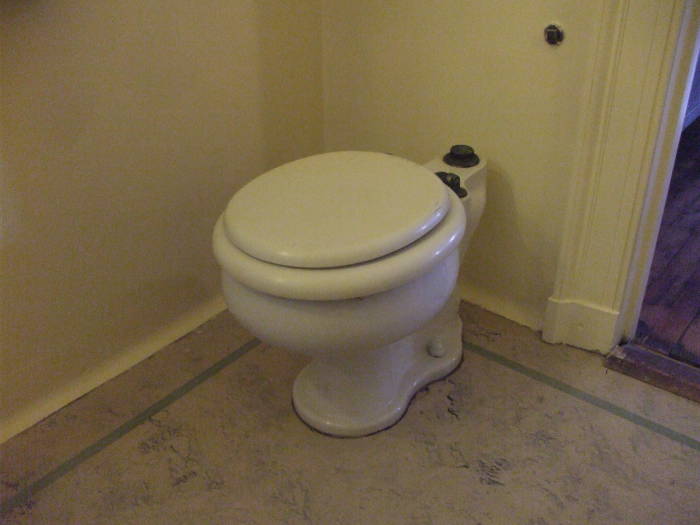 He suffered a debilitating stroke toward the end of his second term in office, gradually improving through the remainder of that term. He and his wife retired to a very nice home in Washington. He died in 1924, and she continued living in the house until her death in 1961.

Here you see Woodrow Wilson's toilet in the bathroom off his bedroom, and the large sink in the kitchen. See the dedicated page for many more pictures and details about Woodrow Wilson and his home in Washington.

Hearst Castle, the mountaintop estate of publishing mogul William Randolph Hearst, features indoor and outdoor pools, ornate fountains, and, of course, toilets, sinks, showers, and tubs. It was built over the period 1919-1947. 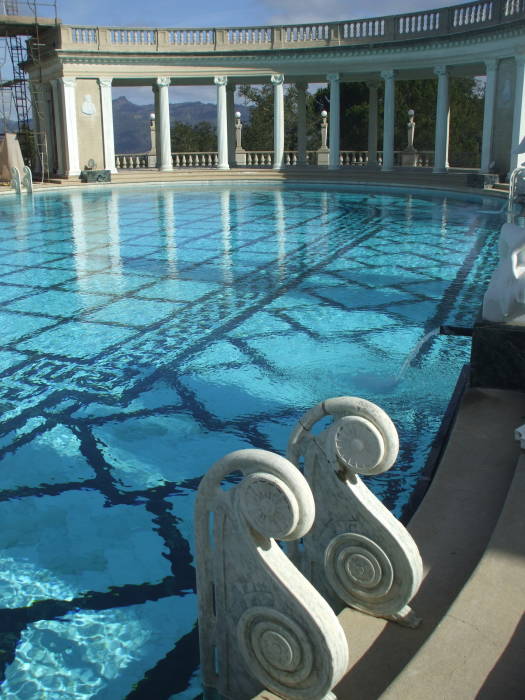 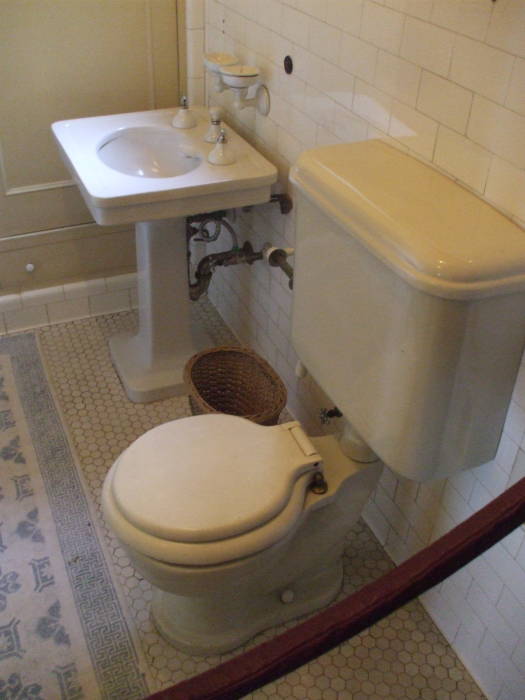 The Coit Tower was built in 1933 in San Francisco.

It's a 210-foot art deco tower built as a monument to the San Francisco firefighters, bequeathed to the city by a wealthy socialite, Lillie Hitchcock Coit, who enjoyed chasing after the fire department when they went on fire runs.

Her will specified that one third of her fortune was "to be expended in an appropriate manner for the purpose of adding to the beauty of the city which I have always loved."

The Coit Tower's interior is decorated by murals painted under the Public Works of Art Project, a New Deal federal employment program. 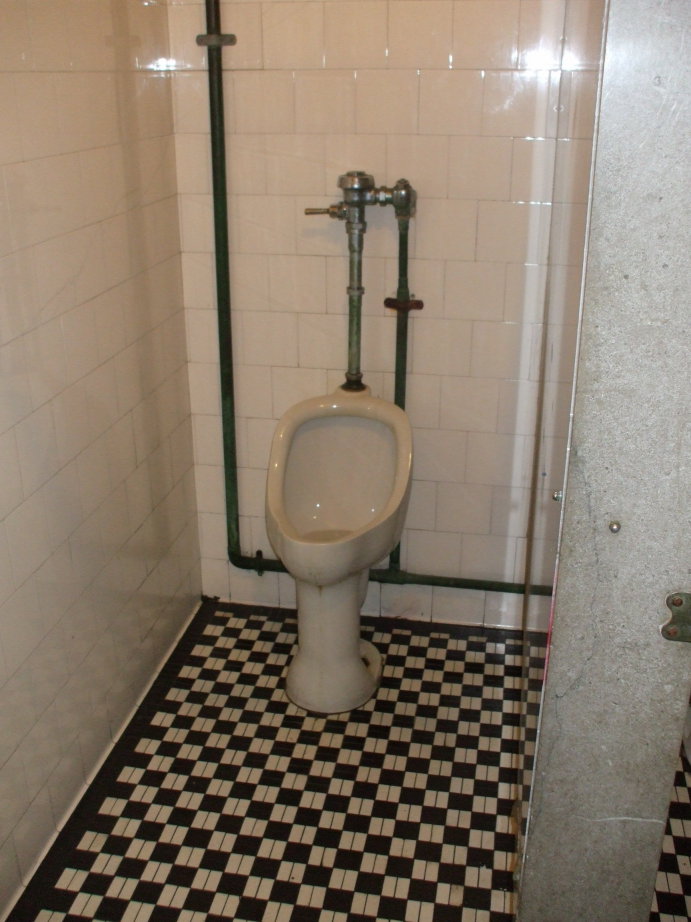 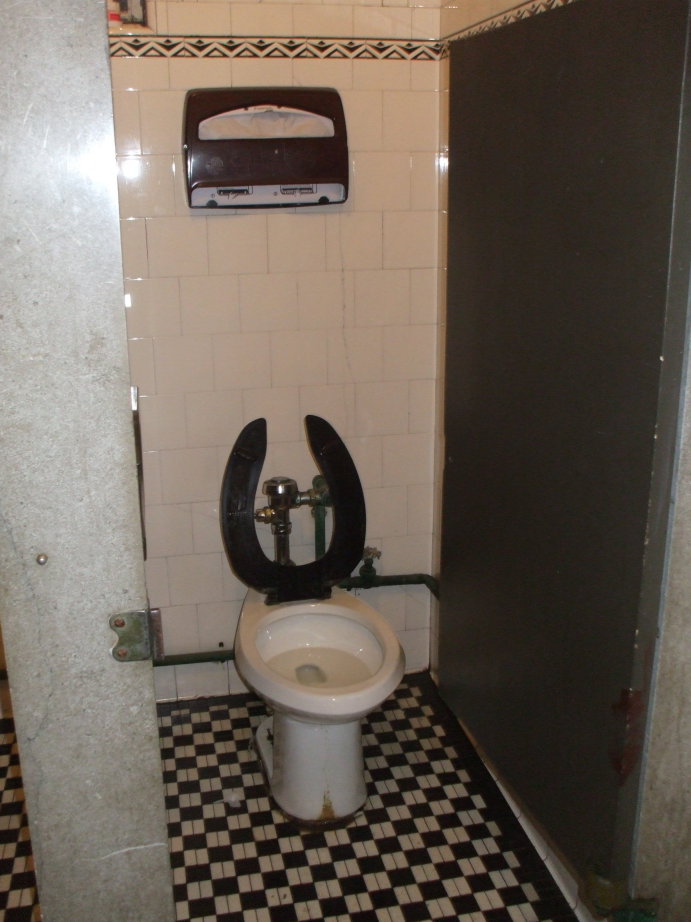 The U.S. Department of the Interior headquarters in Washington, D.C., seems like a time capsule from around 1945.

This includes their restrooms, featuring the old-style "Watch Your Step" urinals.

These vintage urinals have been updated with infrared motion sensors controlling the flush valves. 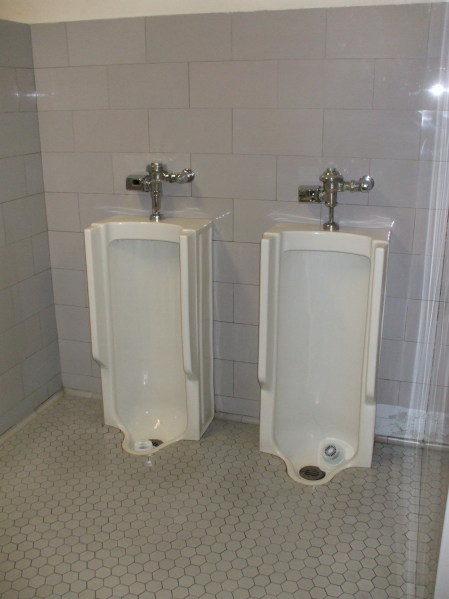 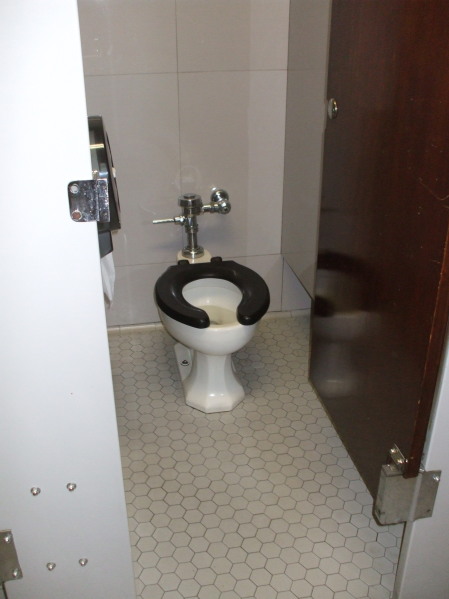 The Department of the Interior toilets are of similar vintage.

Their horseshoe seats are made of hard black rubber with a dull finish.

Hard rubber is probably not as clean as a modern hard-surface plastic, but then that wouldn't be as traditional.

Notice how the stalls have marble walls and dark wooden doors. Classy!

You can visit these restrooms on your way to and from the Department of the Interior museum. Among other things, the museum explains that the department administers mining and oil extraction industries providing the raw materials for such common everyday items as 33-1/3 RPM long-playing records. So, these designs seem very appropriate for the department headquarters.

The Corcoran Gallery of Art is just a few blocks away from the Department of the Interior in Washington, D.C. The Corcoran has some of the big old trumpet shaped urinals from the 1930s or 1940s.

The patterned hexagonal tile floor looks appropriate for that period. It's ceramic harmony!

What is it about central Washington, D.C., and antique toilets? 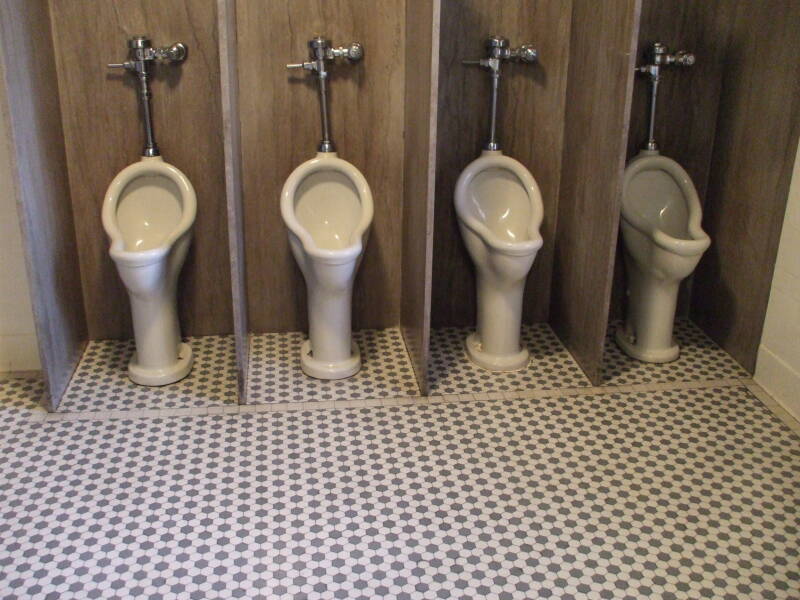 Dwight Eisenhower was the Supreme Commander of Allied Forces in Western Europe during World War II. He planned and led all major operations in the Western European Theatre of Operations, with OVERLORD, the Allied invasion of Normandy in June 1944 being the biggest of all.

After the war he served as the commander of NATO, and in 1952 and 1956 he was elected to two terms as President of the U.S.A.

See the dedicated page to learn about his retirement home near Gettysburg, Pennsylvania, and to read how Winston Churchill, Charles De Gaulle, and Nikita Krushchev may have also used the very toilet seen here.

New York City is notorious for a lack of public toilets, at least in some areas like Midtown Manhattan.

However, if you are walking along Delancey Street on the Lower East Side, this sturdy brick public lavatory awaits you. It's in the grassy median of Allen Street. 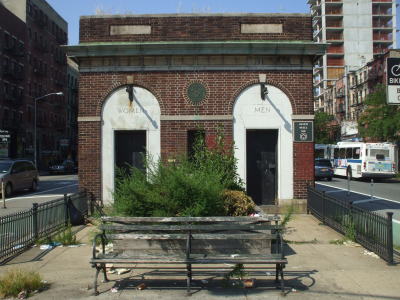 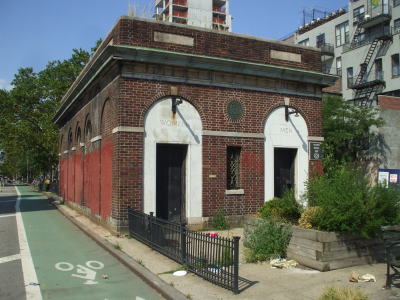 The Capri Inn is a reasonably placed price to stay in San Francisco. It's a "motor inn" from the 1950s or possibly early 1960s, and its jaunty all-porcelain bathroom design reflects its era.

It's at 2015 Greenwich Street, at Buchanan, motelcaprisfo.com. 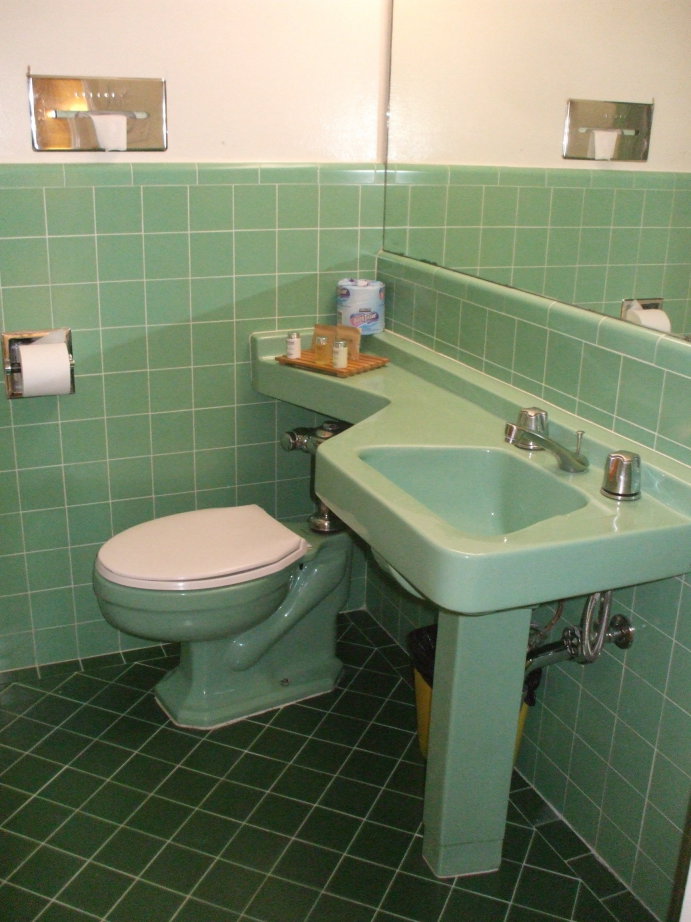