Vincent van Gogh was a Dutch Post-Impressionist painter who was almost entirely unknown during his lifetime but whose work was enormously influential through the 20th century through today. He did not begin painting until his late twenties, and then he produced over 2,100 artworks in just over a decade — 860 oil paintings plus over 1,300 watercolor paintings, drawings and sketches, and prints.

He was born in Zundert, Netherlands, in 1853, and he initially wanted to be a minister. In 1879 he began working as a missionary in a mining area of Belgium. While there, he began sketching the local people.

Six years later, in 1885, he made some sketches and then a lithograph of a composition he titled The Potato Eaters. He continued from several early versions to complete an oil painting the following month, his first major work in oil. However, you might say it doesn't look like a van Gogh painting. It is almost entirely shades of brown and very dark green.

The following spring he moved to Paris and discovered the French Impressionists and their brightly colored palettes. He later moved south to Provence in southern France, and his work became brighter and more colorful under the influence of the strong sunlight and colors there.

Arriving in Arles in February of 1888, van Gogh found it dirty, exotic, and interesting. "The Zouaves, the brothels, the adorable little Arlesiennes going to their First Communion, the priest in his surplice, who looks like a dangerous rhinoceros, the people drinking absinthe, all seem to me creatures from another world."

He rented a room at the Hôtel-Restaurant Carrel in Arles. The colors and the sunlight excited him and had an immediate and strong effect on his paintings. Bring on the yellows, oranges, bright reds and greens and blues. In May he moved to the Café de la Gare and rented a room in the "Yellow House" just next door.

Vincent had lived with his brother Theo while he was in Paris. The two of them became friends with Paul Gauguin. When Vincent moved to Arles, he had a dream of a utopian colony of artists. The Danish artist Christian Mourier-Petersen worked with him for the first two months in Arles. Then the American artist Dodge MacKnight visited for most of April. MacKnight lived on Fontvielle, just north-east of Arles. He introduced Vincent to the Belgian painter Eugène Boch, who stayed in Fontvielle at times. Vincent and Eugène visited each other in July.

Meanwhile, Vincent was trying to get Paul Gauguin to come to Arles. Vincent fixed up a room for Guiguin in the Yellow House, furnishing it and creating a number of oil paintings to decorate it. Imagine making a nice room for someone to stay in by getting some original Vincent van Gogh paintings to hang on the wall...

Gauguin finally came to Arles in late October. He and Vincent worked together. However, they didn't get along. Van Gogh admired Gauguin and wanted to be an equal fellow painter, but Gauguin was arrogant and they argued constantly about art.

The Ear, and the Hospital in Arles

Van Gogh began to worry that Gauguin was going to leave, and he became more and more tense. On 23 December 1888, Vincent had an acute psychotic episode. The two artists had some sort of altercation, and Gauguin left to spend the night at a nearby hotel. Vincent cut off his left ear with a razor, wrapped the ear in paper, and delivered the package to a local maison de tolèrance, an officially sanctioned or at least tolerated brothel that he and Gauguin had both frequented.

Vincent returned home and collapsed. Gauguin happened to return home to the Yellow House just as the police were arriving. They found Vincent unconscious, and took him to the hospital. He was diagnosed with "acute mania with generalised delirium."

This wasn't Vincent's first episode of psychological problems. He had a nervous collapse in Antwerp in 1885, and in 1880 his father had suggested committing him to an asylum in Gheel. From Le Forum Républicain, Arles, 30 Dec 1888: "Last Sunday night at half past eleven a painter named Vincent Vangogh, appeared at the maison de tolèrance No  1, asked for a girl called Rachel, and handed her ... his ear with these words: 'Keep this object like a treasure.' Then he disappeared. The police, informed of these events, which could only be the work of an unfortunate madman, looked the next morning for this individual, whom they found in bed with scarcely a sign of life. The poor man was taken to hospital without delay."

Gauguin stayed away from Vincent. He told one of the police investigators "Be kind enough, Monsieur, to awaken this man with great care, and if he asks for me tell him I have left for Paris; the sight of me might prove fatal for him." He later wrote of Van Gogh, "His state is worse, he wants to sleep with the patients, chase the nurses, and washes himself in the coal bucket. That is to say, he continues the biblical mortifications." Gauguin did leave Arles soon after, and never saw Vincent again. Fifteen years later Gauguin said that Vincent had chased him down the street with the razor before cutting off his ear. Biographers don't find that part of the story reliable. In another uncertainty, the newspaper said that van Gogh had specifically left the ear for a girl named Rachel, while Gauguin said that he had left with the doorman to give to Gauguin when he next visited the brothel.

Back to the Yellow House

Vincent was doing much better by early January, and he returned to the Yellow House. But he spend the next month suffering from hallucinations and delusions that he was being poisoned, and bouncing between home and the hospital.

In March, 30 people from Arles took a petition to the police saying that the fou roux or "redheaded madman" was a public nuisance and danger. The police took him to the hospital for a month. The artist Paul Signac would visit him in the hospital, and Vincent could go home in the company of Signac. In April, Vincent moved into some rooms owned by his hospital physician.

The Hospital in Saint-Rémy de Provence

A short time after his release from the Arles hospital, in early May 1889, Vincent realized that he needed further help and voluntarily committed himself to an asylum in Saint-Rémy de Provence, not far to the north-east of Arles. 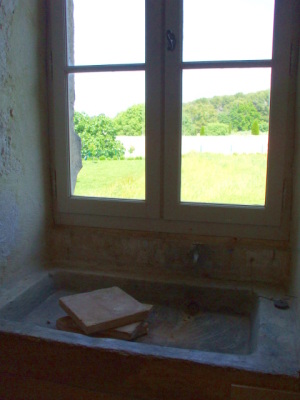 His brother Theo arranged for him to have two small adjoining rooms, one as a bedroom and the second as a studio.

Vincent produced 150 paintings during his one-year stay in this hospital, from May 1889 until May 1890.

During much of his stay he was confined to the grounds of the hospital complex. He painted the garden, the wheat field he could see from his room, and a few portraits of people at the asylum.

Later he was able to leave the walled enclosure, and he painted wheat fields, olive groves, and the Alpilles range of small mountains beyond the tall cypress trees.

Here is a view out of the asylum, looking toward the gardens.

The area has a long history, with the nearby Otello cave bearing decorative carvings dating back to the time when the late Stone Age was becoming the Bronze Age. The monastery of Saint-Paul itself was founded before 982 AD. The current complex was built in the 10th and 11th centuries and modified in the 17th and 18th, and it was converted to a mental hospital in 1855.

Mental health care was very primitive in those days, and featured "hydrotherapy". The patient was physically restrained in a tub, held in place with a wooden panel around the neck, and doused with streams of cold water.

His formal regimen of treatment consisted of two-hour hydrotherapy sessions twice a week. 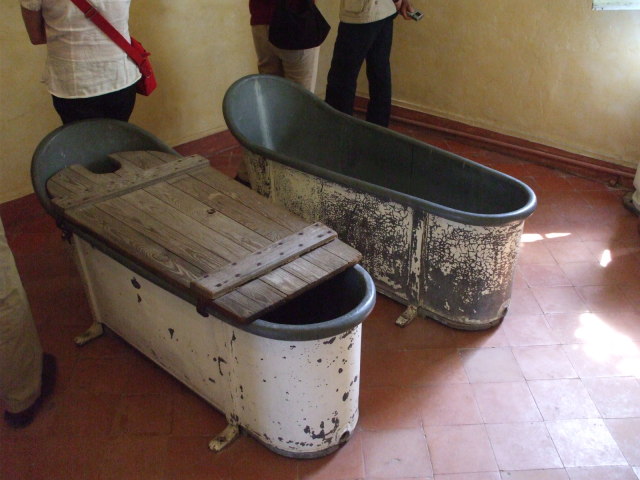 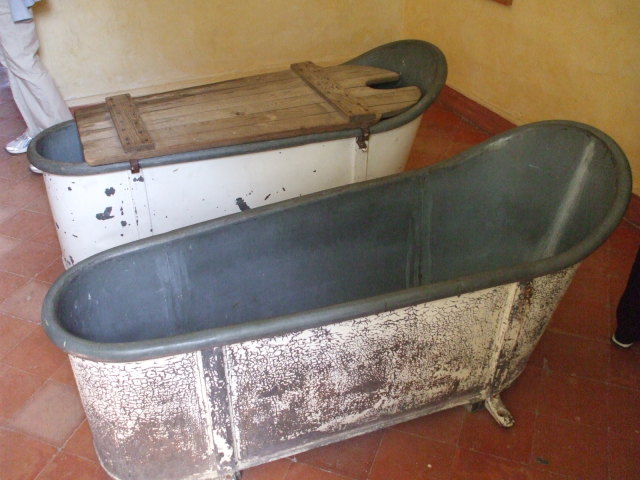 The stability of life in the asylum was much more helpful. Vincent wrote, "I feel happier here with my work than I could be outside. By staying here a good long time, I shall have learned regular habits and in the long run the result will be more order in my life." His intake of coffee and alcohol was regulated, and his attempts to drink turpentine and paint were stopped.

His painting Starry Night depicts the view from his room at night.

He painted portraits of the chief orderly and some other patients. He wrote to Theo, "At the moment I am working on a portrait of one of the patients here. It is odd that when you have spent some time with them and have got used to them, you no longer think of them as mad."

The world finally began to slowly discover Vincent van Gogh. In 1890, Theo got some of his work displayed at the exhibition of Les XX in Brussels, and at the exhibition of the Société des Artistes Indépendants in Paris, where Gauguin, Claude Monet, and Camille Pissaro all complemented his work.

The artist Anna Boch purchased Vincent's painting The Red Vineyard for 400 Francs (equivalent to about $1,000 today) at the exhibition of Les XX. It was the only one of his paintings sold during his life.

One of my travel pages contains a much more detailed description of the Maison de Santé St-Paul.